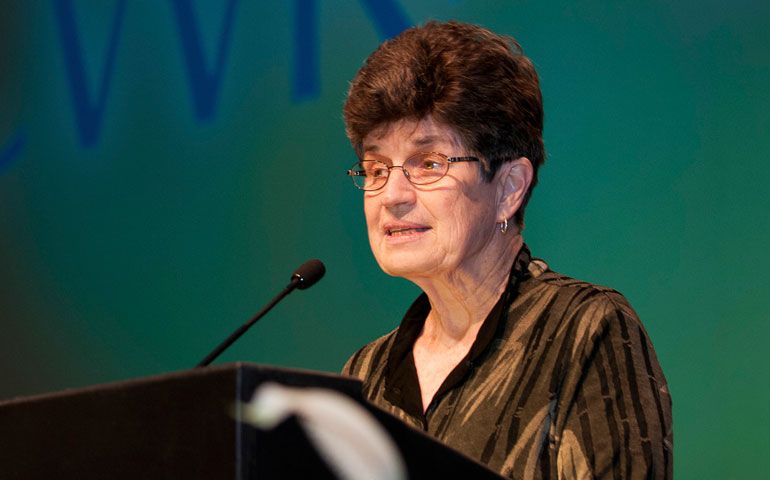 No one should confuse this selection of speeches by presidents of the Leadership Conference of Women Religious with routine nuts-and-bolts reports by chief executives to their annual meetings. Unlike PowerPointed summaries of highs, lows and better tomorrows, the sister presidents grapple with ambiguity, menace, promise and survival in their approach to the podium. It's a tall order, well done, and these speeches are superb.

They speak to a deceptively complex array of listeners and needs: sisters from hundreds of distinct communities, a formidable patchwork of lay supporters, priests and bishops both for and against their aims, sisters organized to oppose them, countless workers in church-related activities, and elements of the general public. In response, the presidents become, by turns, cheerleaders, truth-tellers, theological analysts, interpreters and boosters of religious vocations, pious traditionalists, rousing reformers, advocates of justice, and chimes of inspiration.

Together, they mirror a half-century journey to sustain the wellspring of Second Vatican Council renewal against constant resistance from popes and curial authorities. The closer to the excitement of the liftoff -- in the throes of reform, anxiety and the surrounding women's movement -- the bolder the language of what Benedictine Sr. Joan Chittister calls the "new vision" of justice for women. In ensuing decades, under repeated attempts to curb their feminist and autonomous leanings, the bluntness of the appeals is increasingly replaced by symbol and euphemism, a kind of protective sublimation suited to navigate through mounting assaults from Rome.

The range of talks, therefore, constitutes what might be called "prophetic diplomacy," whereby LCWR resolutely stands by its prophetic call for change but over time wraps that urgency in less confrontational terms. The haunting question that hangs over the hall is what to do about the 500-pound gorilla, if talk therapy with the Vatican continues to yield nothing.

There isn't room here to detail the rich, artistically conceived themes explored by this group of participants. One strand of the tapestry rates special mention, however: the progression of references to the status of women within the church and without. They are spoken under the cloud of accusation that they exhibit "radical feminism," interpreted by the hierarchy as a pernicious foe of the church. It was the bluntest weapon in the Vatican's effort to impugn LCWR's intentions.

In 1980, less than a year after dramatically urging Pope John Paul II to consider women as priests, Mercy Sr. Theresa Kane said in her speech, titled "To Speak the Truth in Love," that her fellow leaders had "a serious responsibility to articulate a feminist theology of religious life," inasmuch as LCWR particularly has been a victim of the institutional church's "sexism, clericalism and paternalism."

Five years later, Presentation Sr. Margaret Cafferty declared, "Our concern for women today could more appropriately be called fidelity to our founding charism, rather than dismissed, as it often is, as a peculiarly religious brand of radical feminism. For all of us, it is a demand of our commitment to the Gospel."

Continuing, "We have been singled out for our concerns with feminist issues precisely because it is perceived as incongruous that women religious should have an interest in the feminist agendas. Here again language is involved to divide, separate, and control. ... In our contemporary era of biblical insight and understanding, there is enough scholarly evidence to question some of the long-standing assumptions about the exclusivity of Jesus' call to only male disciples."

Mercy Sr. Doris Gottemoeller's 1994 address displays the trend toward nuanced conciliatory approaches. She made the case for discouraged sisters staying in the church rather than leaving. "It is our love for Christ and for the community united in Christ which impels and sustains our commitment to membership. To allow ourselves to be alienated from the church is to surrender our birthright ... to be exiled from our true home."

But she also briefly made common cause with the continuing grievance. "The church itself," she said, "institutionalizes sexism within and fails to denounce it without."

By 2010, as the Vatican fomented its investigations of American sisters and LCWR, Franciscan Sr. Marlene Weisenbeck reflected the widespread shock and confusion, counseling a go-slow approach. Hope alone wouldn't "get us where we want to be," she cautioned, stressing the need for a concrete strategy. But she counseled patience rather than protest. "We must not despair of the impasse of nonexistent and misunderstood conversations with church leaders."

Franciscan Sr. Pat Farrell faced the unenviable task of addressing the conference after the Vatican had issued its hammer blow aimed at taking custody of LCWR. She decried the "intolerance of dissent" and "continued curtailing of the role of women." A response to the crackdown must be "humble, but not submissive, rooted in a solid sense of ourselves, but not self-righteous, truthful but gentle and absolutely fearless."

Do the speeches lend support to Vatican accusations that LCWR allowed dissent against church teachings? Probably so, as I see it, though others will disagree. The corollary is: Why wouldn't the sisters proudly claim advocacy of those "forbidden" changes as founded in conscience, and walk off the stage, leaving the ball in the Vatican's court? What is the price of membership in good standing?

The depth of thought and creativity by the presidents affirm again the extraordinary qualities of erudition, conscience and character that distinguish American sisters. These speeches are cultured meditations that render the Gospel authentic. The effect that this high-minded rhetoric has had at the ground level is a separate matter worth pursuing. Meanwhile, the presidents have supremely risen to the occasion afforded them.

[Ken Briggs reported on religion for Newsday and The New York Times, has contributed articles to many publications, has written four books, and is an instructor at Lafayette College in Easton, Pa. He blogs online for NCR Today.]

Looking for change in the church in 2014

Time to face facts: Pope Francis agrees with the doctrinal assessment of LCWR