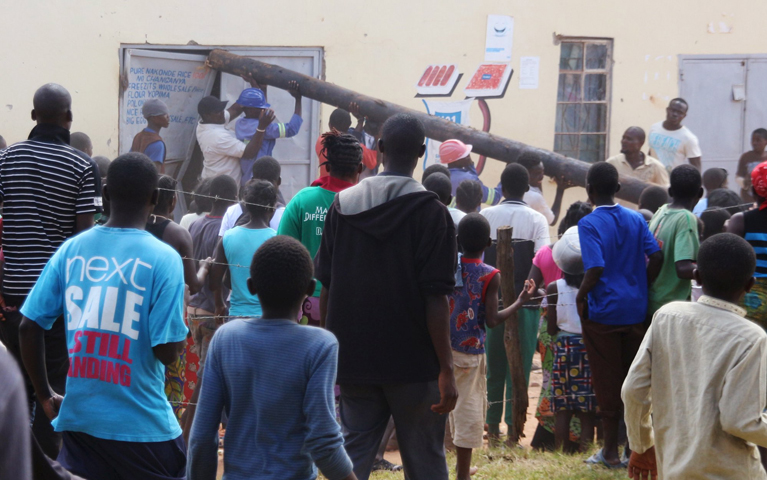 People use a pole to batter a shop doorway during clashes with police April 19 in Lusaka, Zambia. (CNS/Jean Mandela, Reuters)

Zambians are shocked and ashamed of the xenophobic violence in the capital, Lusaka, in which mostly Rwandans' homes and shops were ransacked, a church official said.

"We are totally at a loss trying to explain the reasons behind this violence," said Fr. Cleophas Lungu, general secretary of the Zambia Episcopal Conference, in an April 22 telephone interview from Zambia's capital, Lusaka.

As a "home, protector and voice" of the marginalized, the Catholic church was the first place people turned when fleeing the attacks, Lungu said, noting that about 300 refugees from Rwanda and other African countries were taking shelter at St. Ignatius Church in Lusaka.

The violence started April 18 in a densely populated low-income area in Lusaka after residents accused a Rwandan shop owner of being behind suspected ritual killings. Homes of mainly Rwandans were destroyed and their shops looted. By the following day, the attacks had spread throughout the city's poor residential areas and involved other nationalities.

This violence "is un-Zambian," Lungu said, noting that "as a nation, we are not associated with xenophobic tendencies."

Zambians "are proud of our reputation of providing hospitality to refugees," he said, noting that it is hosting more than 50,000 people who have fled wars in countries such as Angola, Mozambique, Rwanda, Burundi, Congo.

Many Rwandans "have been here for more than 20 years, after fleeing the genocide in that country in 1994," Lungu said.

"Our brothers and sisters from other countries work very hard just to make ends meet, and they are mostly law-abiding," he said.

The attacks could be a result of "scapegoating for our own problems of poverty and unemployment," he said. "Huge numbers of young people are unemployed" in Zambia and high and rising costs of commodities "cause great hardship."

Inflation has risen to more than 20 percent in Zambia, where more than 60 percent of the population of 15.7 million people lives on less than $1.90 a day, according to the World Bank.

"We have enormous challenges of poverty, but instead of addressing the root causes of our problems," immigrants are being scapegoated, Lungu said.

"The exaggerated rumors about ritual killings" exacerbate the situation, he said.

Zambian President Edgar Lungu visited St. Ignatius Church April 21 and told the victims of the attacks that he took "full responsibility on behalf of the Zambian people."

According to the Lusaka Times, he assured them of "full protection and security of your person and property."

Zambia's army was called in to help police restore order in the violence-affected areas. Police said two people were killed in the violence, both of them Zambians.

The church in Zambia intends to join with civil society groups, the government and others in "identifying the causes and strategically and comprehensively addressing the issue" of xenophobic violence, Lungu said.

"Particularly in this Year of Mercy, we are called to welcome strangers and to feed the hungry," the priest said.

In a 2012 pastoral letter, Zambia's bishops objected to the compulsory repatriation of Rwandan refugees in Zambia, saying it was "not right for the office of the Zambian government's Commissioner for Refugees and the UNHCR to remove the refugee status from [Rwandan] nationals based in Zambia or those from other countries and to oblige them to return to their own country against their wishes." The bishops asked the Zambian government "to regularize the status of some refugees in this country and facilitate that they be accorded local integration, including freedom of movement and of employment."