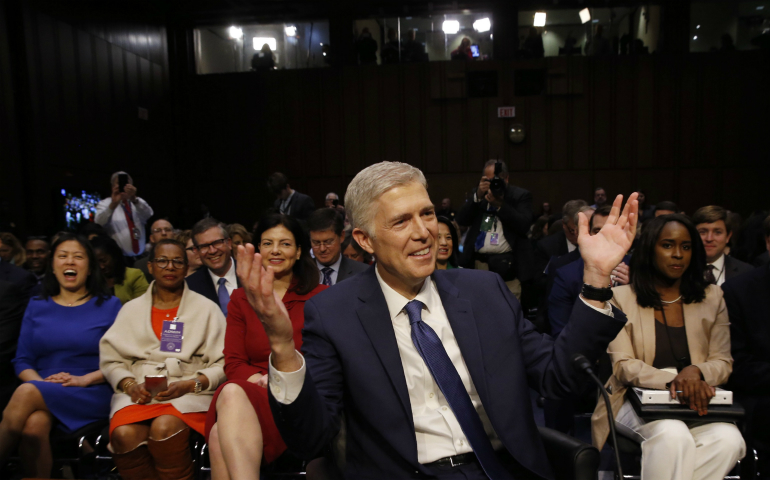 Gorsuch said March 21 that he wouldn't give his personal views on Roe vs. Wade or any other Supreme Court decision during the hearing and only said the court's decision in Roe set a precedent that has been reaffirmed by the court. He gave similar answers on questions about guns and campaign finance.

When he was asked by Sen. Lindsey Graham, R-South Carolina, if Trump asked him to "overrule Roe v. Wade," Gorsuch said he hadn't. When pressed further to say what he would have done if the president asked him that, Gorsuch said he would've "walked out the door. It's not what judges do."

The nominee was asked by Sen. Dick Durbin, D- Illinois, about his ruling in favor of Hobby Lobby when he was in the 10th Circuit. In the ruling, the company was exempt from regulations to provide insurance coverage for contraception which they owners objected to for religious reasons.

Gorsuch said the case was a "tough one," but the court followed the guidelines of the Religious Freedom Restoration Act passed by Congress. He said the act didn't define terms of a person and could be interpreted that corporations have similar religious liberty rights.

He also stressed later in questioning that he views the text of the law as key and he said he credits his teacher, Sister Mary Rose -who taught him to diagram sentences - for that focus.

The first day of Senate confirmation hearings for Gorsuch began March 20 with a series of introductory remarks from senators establishing what they hope to ask the nominee and the importance of the role of Supreme Court justice.

Sen. Charles Grassley, R-Iowa, who is chairman of the Senate Judiciary Committee, began the day's hearing by praising what he said was Gorsuch's firm respect of the separation of powers of government. A vote on the judge's confirmation is set to take place April 3.

The nominee, who currently sits on the Denver-based U.S. Court of Appeals for the 10th Circuit, would fill the vacant seat on the Supreme Court left by the death of Justice Antonin Scalia death last year. Senate Republican leaders last year chose not to vote on then-President Barack Obama's nominee for the court, Judge Merrick Garland.

In opening remarks, many of the senators spoke of the importance of a Supreme Court justice's role, particularly given the length of time a justice generally has the position — it is a life term. Sen. Patrick Leahy, D-Vermont, said the "stakes could not be higher" for the job.

Sen. Dianne Feinstein, D-California, the committee's ranking Democrat, and the second to address the hearing, noted the "very unusual circumstances" of the hearing after Garland was never granted a similar opportunity.

She highlighted several areas that she would be interested in hearing more from Gorsuch such as his views on abortion and on voting rights.

She noted that the judge had not made decisions on abortion but she said his writings "raise questions" and can be interpreted to mean he would vote to overturn Roe v. Wade, the 1973 Supreme Court decision that legalized abortion.

Gorsuch has degrees from Columbia, Harvard and Oxford universities. He clerked for two Supreme Court justices and also worked for the Department of Justice. He is an adjunct law professor at the University of Colorado and he wrote a 2009 book arguing against the legalization of assisted suicide and euthanasia.

He has strong views on religious liberty having sided with the Little Sisters of the Poor in their challenge of the contraceptive mandate of the Affordable Care Act. In Hobby Lobby Stores v. Sebelius, in June 2013, the 10th Circuit ordered the federal government to stop enforcement of the federal mandate against Hobby Lobby, the Oklahoma-based Christian chain of retail arts and crafts stores. In his concurrence, Gorsuch said the contraception mandate substantially burdened the company's religious exercise — a decision the Supreme Court later upheld.

Gorsuch, who was raised Catholic and attended a Jesuit-run Catholic high school in Maryland, Georgetown Preparatory School, now attends an Episcopalian church with his family in Colorado. Scalia, who had been one of six Catholic members of the court, was often described as its most conservative voice and known for his strict interpretation of the Constitution's intent.

Just as the first day of hearings got underway, 60 national and state pro-life groups sent a letter to the members of the U.S. Senate calling for Gorsuch's swift confirmation.

"Judge Gorsuch is widely recognized as a jurist possessed of deep intelligence and true fairmindedness," the letter said. "In 2006 the U.S. Senate recognized these qualities, confirming Gorsuch without dissent to his current position on the 10th Circuit. After a decade of constitutionally sound and clearly written rulings and opinions, Judge Gorsuch deserves once again the swift approval of the Senate.

The letter was spearheaded by the pro-life organization Susan B. Anthony List and signed by members of the Pro-life Court Coalition.

"Many will attest to Judge Gorsuch's judicial temperament and his respectful treatment of everyone in proceedings before him," the letter said. "He has consistently applied an originalist approach to the Constitution, and a respect for the separation of powers, reminiscent of the late Justice Antonin Scalia.

"We believe that Judge Gorsuch's thoughtful opinions illuminate how he would decide difficult questions on the Supreme Court," it added.