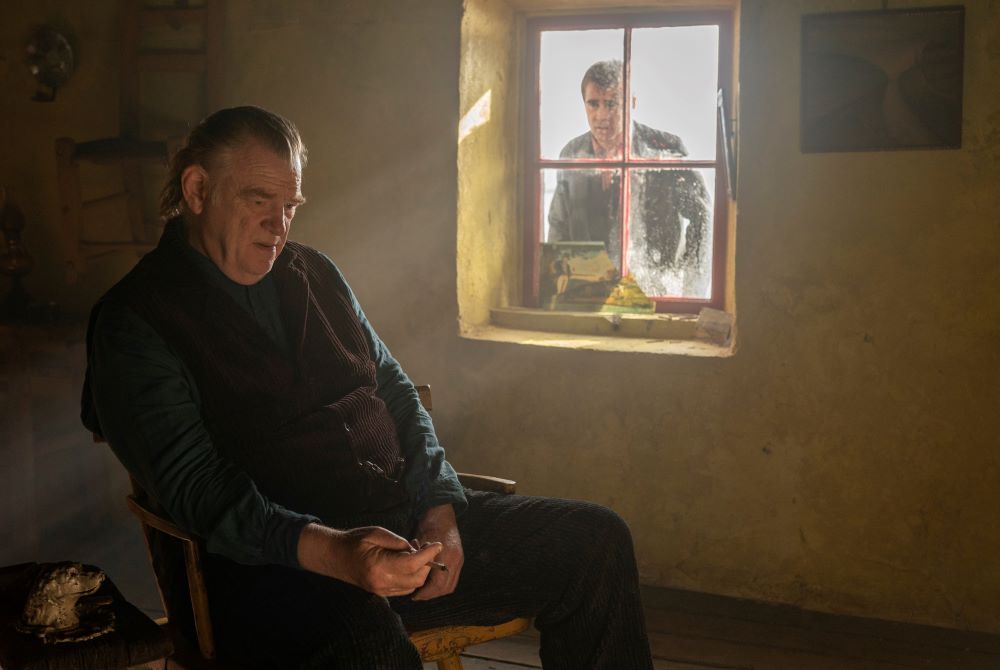 Brendan Gleeson and Colin Farrell play close friends in the film "The Banshees of Inisherin," set on an island off the west coast of Ireland in the 1920s. (Courtesy of Jonathan Hession/Searchlight Pictures)

There is no one way to interpret Oscar and Golden Globe winning writer/director/producer Martin McDonagh's new film, "The Banshees of Inisherin." A standout winner of two prizes at the Venice Film Festival in September, McDonagh pairs two of his favorite actors from his startling 2008 criminal caper "In Bruges," Brendan Gleeson and Colin Farrell.

In "The Banshees of Inisherin," McDonagh also returns to familiar territory that imbued his 2018 "Three Billboards Outside Ebbing, Missouri": the work of grace, death, dark comedy and violence in human relationships.

On an island off the west coast of Ireland in the 1920s, the content and uncomplicated Pádraic (Farrell), lives with his spinster sister Siobhan (Kerry Condon) in a house left them by their parents, along with a small dairy farm. The siblings are nearing middle age while Pádraic's older best friend Colm (Gleeson) is noticeably aging.

Every day, Pádraic looks forward to spending time in the pub with Colm until one day Colm decides he doesn't like Pádraic anymore and does not want to speak with him again — ever. All of a sudden, he finds Pádraic "dull." Pádraic, whose personal behavior and morality are framed by "niceness," lacks the skills to handle Colm's decision and tries to heal whatever has caused this rift.

What becomes a village conflict, played out against the sounds of the larger Irish Civil War on the mainland, leaves everyone confused, particularly the simple-minded Dominic (Barry Keoghan). A craggy old woman (Sheila Flitton), appears here and there and talks about the deaths that are coming to the island. She epitomizes the banshees of the title, a dark mythic creature who harbingers death. 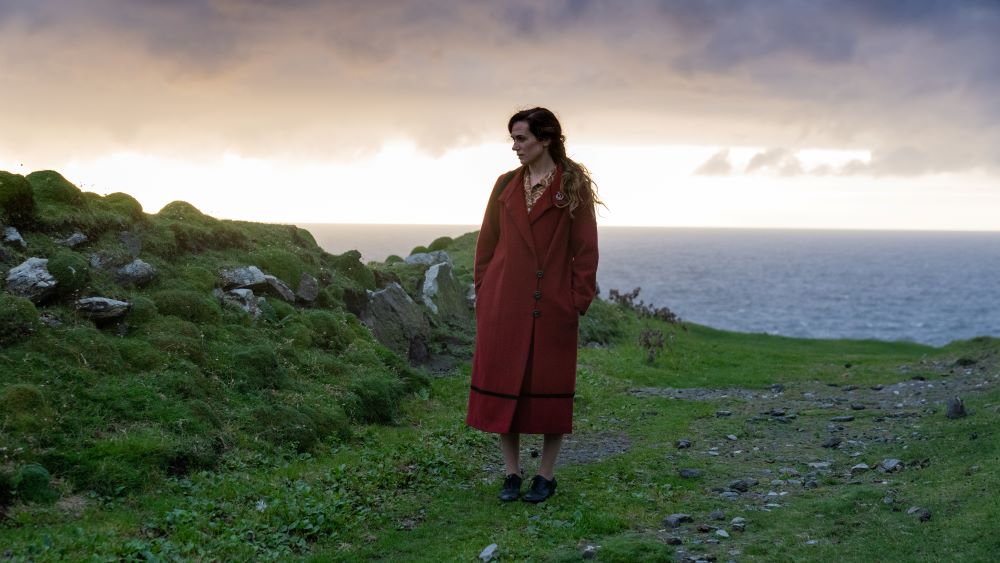 In "The Banshees of Inisherin," Kerry Condon plays Siobhan, who lives with her brother in a house their parents left them on an island off the west coast of Ireland. (Courtesy of Jonathan Hession/Searchlight Pictures)

Pádraic continues his efforts to get to the bottom of things and Colm threatens extreme violence: Every time Pádraic speaks to him, he will cut off a finger and give it to him. Pádraic is incredulous, but Colm, a master musician, is serious, even if it means he cannot play again.

Colm takes his inner life to the parish confessional and the priest questions him about his recurring depression. The second time Colm goes to confession, it turns into a spectacle and will go down as one of the funniest cinematic confession scenes ever.

Meanwhile, Siobhan receives a job offer to work on the mainland. The thought of his sister leaving shifts Pádraic's world yet again. When Pádraic persists in bothering Colm, the older man carries out his threat, leading to the death of Pádraic's dearest companion. Whatever response Colm hoped to achieve by cutting off his friendship with Pádraic, it doesn't go very well at all.

When I saw this film at the Venice Film Festival, I was frankly baffled by it. But I am a fan of McDonagh's films, so I took my time and considered the story by looking for moments of grace — like those that characterized his previous works. In "Three Billboards Outside Ebbing, Missouri," he took us along the border of Flannery O'Connor's gothic south. With "The Banshees of Inisherin," he has invited us squarely into Ireland's gothic world, with deeply flawed and mentally limited human beings, dark humor, ghostly characters who portend bad things, and lots of religion marked by the fear of death and shocking violence.

There is a sacramentality here, too, because Colm's spiritual despair and self-harm are an outward expression of his inner fear of death. His grotesque actions are not directed at Pádraic, whom he can see and hear, but at God whom he cannot. As the statue of Our Lady guides the people to the church and back home again, we are reminded that this is a land where the memories of saints, fairies and banshees dwell.

But there are other ways to interpret this film. One that works for me is to think of Pádraic (and his sister) as not real, but good spirits in contrast to the banshees — phantasms in this crowded land of spirits who portend death.

But if Pádraic is instead a real person, then Colm's extreme behavior becomes cruel and Pádraic's very human reaction, heartbreaking. When Pádraic gets into trouble at one point, Colm becomes his savior. At the end, when Pádraic decides to do something extreme to retaliate against Colm's extreme violence, the younger man's actions prompt Colm to choose life. But here again, Pádraic could be human, spirit or a projection of Colm's inner turmoil.

I am reading How to Tell a Story: An Ancient Guide to the Art of Storytelling for Writers and Readers, a new version of Aristotle's Poetics. The translator, Philip Freeman, reminds readers in the introduction that for Aristotle, the plot is everything to a story, even if the characters are very interesting, and that conflicts between family members and friends, between people who love each other, are the most compelling stories of all.

Pádraic's love for his friend — depicted in arguably the most nuanced performance of Farrell's  career — and the mysterious conflict that Colm angrily creates by crushing that loving relationship, is mesmerizing, proving Aristotle's point.

Figuring out what the story means only makes sense, in my humble opinion, if we understand that Pádraic is a kind of angelic presence reflecting God, whether he is human, spirit or an imaginary mythic creation. Pádraic, his very presence, irritates the stoic Colm into taking an anguished inner journey toward accepting and making peace with the reality of aging, and the fear of death's inevitability. It seems to me that Colm suffers and creates suffering because he cannot deal with the idea of dying.

The sensibilities of the universe McDonagh has created are as profoundly Catholic as they are Irish.