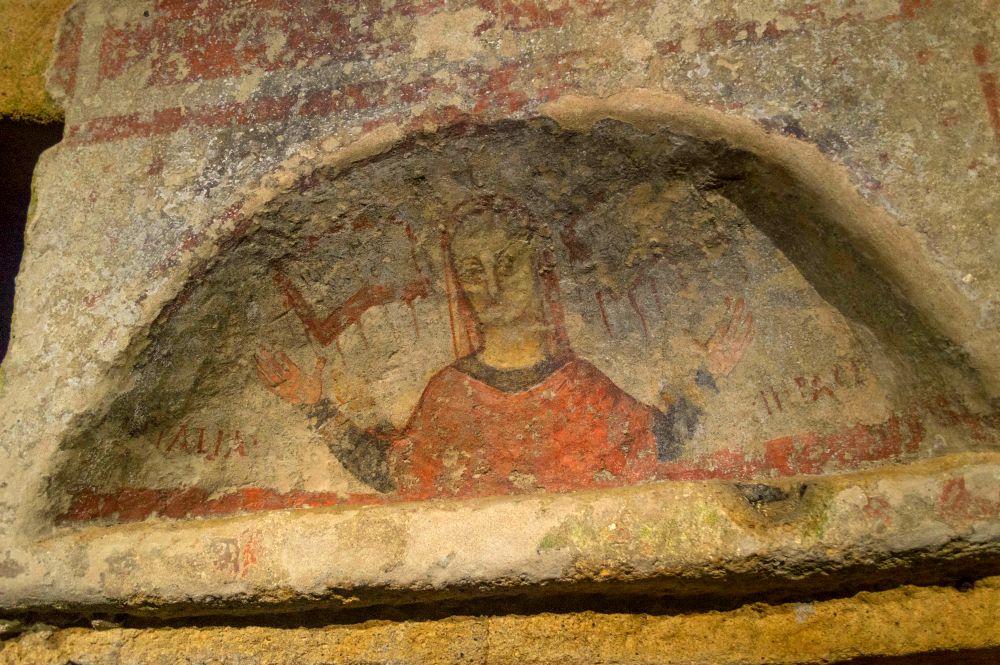 Bitalia, pictured in a fresco above her burial spot in the Catacomb of San Gennaro in Naples, Italy (Wikimedia Commons/Dominik Matus) 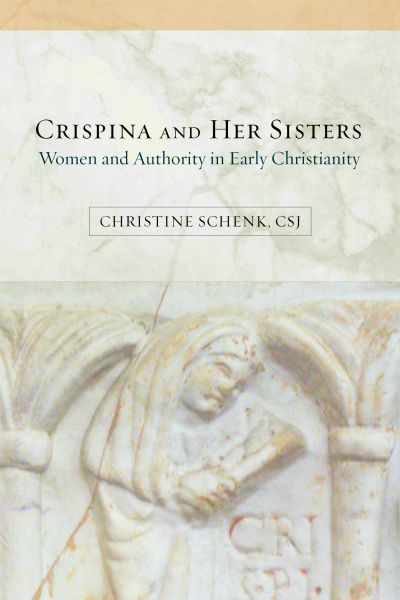 Is there such a thing as reverent glee? If so, then that's how I would have described St. Joseph Sr. Christine Schenk as she bounded among the ruins of ancient Cenchreae, the location of the house church of the deacon Phoebe during a travel program I led. There is something about standing in the place mentioned in our Scriptures that stirs us, and reminds us that our ancestors in the faith were real, historical folks. In this case, a first-century woman whom the Apostle Paul called "our sister, who is [also] a diakonos of the church at Cenchreae" (Romans 16:1).

It is this sense of immediacy that permeates Crispina and Her Sisters: Women and Authority in Early Christianity. This connection across the expanse of time makes what could have been a recitation of dusty facts into an engaging read.

Schenk's expressly stated goal is "allowing men, and especially women, to retrieve the memory of influential women whose witness has for too long been invisible or distorted in Christian memory" with the "hope that drawing attention to these ancient images of early Christian women in iconic authority portrayals may help us reset our preconceived mental models."

With this worthy goal requiring a meticulous methodology that would give even seasoned epigraphists and historians pause, Schenk's research and writing took three years to accomplish. She explored visual imagery found on burial artifacts of prominent late third- and fourth-century Christian women, perused women's history in the first four centuries of the common era and studied the meaning of funerary art within the Greco-Roman burial conventions.

While her work makes a valuable contribution to the conversation about women's authority roles within the early church, Crispina and Her Sisters does a mitzvah for academics who investigate early Christian burial practices. Schenk analyzed 2,119 images and descriptors of sarcophagi (stone coffins) and fragments from the third to fifth centuries — "all currently available images of Christian sarcophagi and loculus plates" — focusing on the portraits and their accompanying iconography. Pardon my geeking out, but analyzing and compiling this data and comparing the results with the literary portrayals of Christian women offers a unique contribution to early Christian studies.

Early Christianity emerged first within the matrix of Palestinian Judaism (think Jesus, Mary and the early disciples), but within two decades it had become an urban phenomenon within the larger Greco-Roman world. As Schenk notes, the roles of women were not so much defined by their religion as by their rank. "Patriarchy restricted both Jewish and gentile women, but the extent of that restriction depended more on a woman's socioeconomic status, cultural context and geography than her religious affiliation."

This distinction in class and status will result in an imbalance of primary source materials. Only wealthy folks could afford to commemorate their dead with finely carved sarcophagi, while enslaved men and women could at best hope for a marker in the family's plot. But Schenk's interest is directed toward the investigation of Christian women in authority, which, within the Roman patriarchal system, would be women with status who could afford to leave behind memorials.

Before investigating the material remains, Schenk reviews the sociocultural context (Chapter 1) and the opposition to Christian women in authority during the first three centuries (Chapter 2). These chapters provide an introduction into early Christianity through the lens of women's participation.

Schenk concludes that "three significant differences between first- and fourth-century societies … can be attributed to the influence and authority exercised by Christian women":

Schenk then provides a helpful primer into interpreting early Christian art (Chapter 3) before focusing on the portrayal of women in frescoes and inscriptions (Chapter 4).

One of the values of working with inscriptions and funerary art is the discovery of people who otherwise would go unnoticed in history. "While literary sources normally connect historians with educated people from the upper classes, visual images and artifacts can provide a window into the world of the common people, who in fact always constitute the majority."

Related: Jesus founded a movement led by both women and men

The fourth-century sarcophagus of Crispina, displayed at the Vatican Museums in Rome, features the deceased holding a codex monogrammed with the Chi-Rho symbol for Christ. (Flickr/Erik Törner)

Case in point: Meet Flavia Arcas, whose second-century funerary inscription from the Catacombs of Priscilla designates her as an enrolled "widow."

Or Bitalia, who is pictured in a fresco above her burial spot in the Catacomb of San Gennaro in Naples, Italy. She is depicted with two open books hovering above her. The pages are inscribed in Latin: Joannis, Markus, Matteus. Schenk suggests that from Bitalia's standing position and the presence of the Gospels, this fourth-century woman was involved with teaching and proclaiming the Gospels.

Finally, the eponymous Crispina is portrayed on the fourth-century sarcophagus in which she holds a codex monogrammed with the Chi-Rho symbol. The elaborately carved façade contains vignettes of Jesus and Peter, suggesting that Crispina may have been remembered for her teaching about Jesus and Peter.

The adage among those who study ancient burial practices is, "How you bury the dead says much about what you value in the living." This is preciously the foundation on which Schenk is attempting to construct her thesis about women's authority. How were Christian women depicted in inscriptions and on sarcophagi in comparison to Christian men? Chapters 5-7 explore Roman funerary practices and the emergence of unique Christian burial iconography, with attention to the depiction of the deceased in portraits.

The final chapter brings together the results of the funerary analysis and the literary evidence of Christian women's authority, confirming Schenk's thesis that, despite ecclesial efforts to the contrary, women exercised considerable influence, patronage and authority in the early centuries.

With the publication of Crispina and Her Sisters, Schenk demonstrates that she stands with these "older" sisters who exercised authority, inspiring, educating and building the Christian community then and now.

Read this next: What was Paul doing crashing a woman's worship service?
A version of this story appeared in the July 13-26, 2018 print issue under the headline: Burial art illustrates women who led.