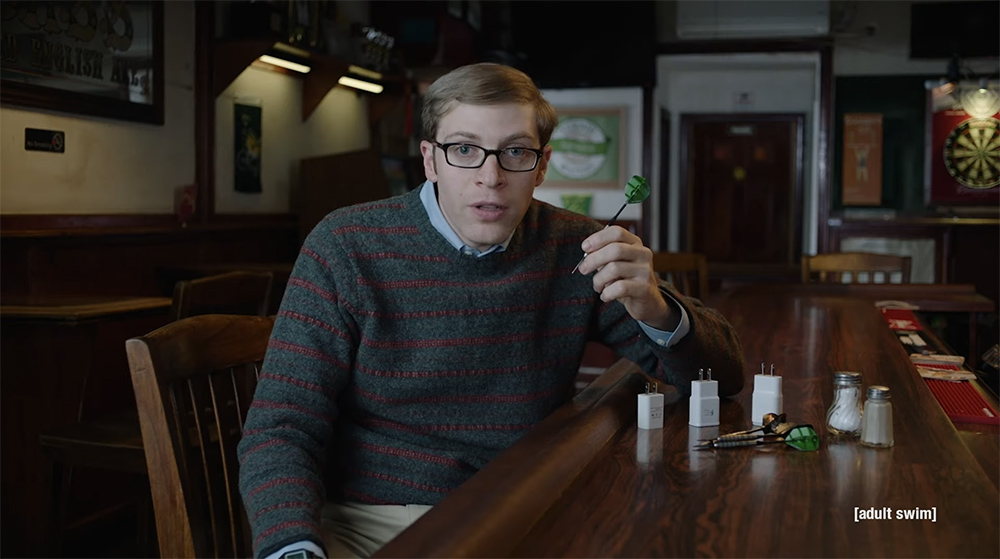 How old is Joe Pera?

Watch any episode of the standup comedian's sitcom, "Joe Pera Talks with You," for a few minutes and you'll want to Google the question.

Pera has a youthful, wrinkle-free face, but everything else about him suggests octogenarian in the 1960s: dress shirts tucked into khakis, neatly combed and outdated hairstyle, nondescript plastic-rim glasses. His walk is hunched and halting. He talks with a grandfatherly pace, volume and inflection.

And the stuff Pera says matches his old-man vibe. For instance, he begins an episode titled "Joe Pera Talks With You About Beans" by looking right into the camera and saying, "Beans. They have it all. Protein. Carbs. Fiber. Affordable." There is not even a hint of irony in this line or hundreds of others like it throughout the series.

Then again, maybe the whole thing is 100% ironic. Maybe it's a bit.

Because after you figure out how old Pera is — 34, originally from Buffalo, New York — the natural follow-up is: There's no way he's really like this, right? Is he getting cheap laughs because a young guy acting like a senior citizen is funny?

These answers are harder to pin down. Pera never "breaks character" in interviews or in his standup performances. One reasonable fan theory is that "Joe Pera" on television is just a slightly exaggerated version of Joe Pera the real-life person, an old soul born too late who's self-aware enough to realize how his temperament can surprise people. 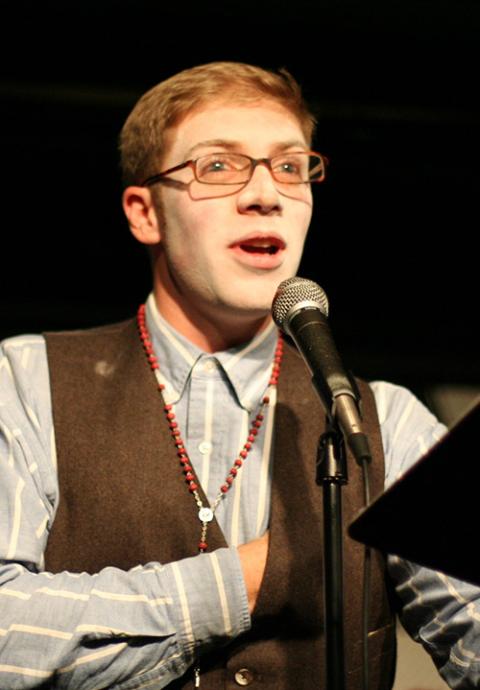 Joe Pera performs in "Overload the Machine" at the Peoples Improv Theater in New York City in 2011. (Wikimedia Commons/Benjamin Ragheb)

Ultimately, Pera has made something that is so gentle and warm I don't believe he has a mean-spirited bone in his body. Until it was canceled recently and prematurely after its third season on Adult Swim, "Joe Pera Talks With You" was the loveliest, weirdest thing on television.

It's also a Catholic show — or, at the very least, a show that should have special appeal to Catholics. (Stephen Colbert, the patron saint of Catholics in media, is a fan.) Joe is a Massgoer and his beloved grandmother is an active parishioner. You can spot a first Communion felt banner and a small crucifix in different interior scenes, and the local pastor is an occasional supporting character. On one level, a pleasant background religiosity contributes to the feeling that the world of the show exists in some distant Lake Wobegon-style era, which is consistent with Joe's way of being.

But what is even more Catholic than these surface-level details is what you could call the show's "sacramental imagination": Joe constantly finds beauty and grace in the mundanity of everyday life and within the people he knows. To him, people are generally good. So are watching sunrises over a lake, fried fish and snowmobiles. He never seems bored.

This is a Catholic way of seeing the world — as "charged with the grandeur of God," in the words of the Jesuit poet Gerard Manley Hopkins. There's no detail too small to be worth noticing if you have a sacramental imagination because every detail could be a place to find the transcendent.

The 10- to 20-minute episodes revolve around his life as a middle school choir teacher in Marquette, Michigan, a small port city on the Upper Peninsula's Lake Superior coastline. (There's another little Catholic detail: The city is named for the French Jesuit explorer Jacques Marquette and has a rich Catholic heritage.) And much of the show centers on small, seemingly insignificant moments: Joe goes grocery shopping with a prewritten $70 check to avoid splurging. He accompanies his grandmother to the hair salon and then to a fish fry dinner. There are usually detours and small realizations, which Joe describes in short monologues straight to the camera.

My favorite episode of the series, "Joe Pera Reads You the Church Announcements," is a perfect blend of the show's culturally Catholic milieu and its sacramental imagination. The episode begins with Joe in church. He walks to the lectern to read the end-of-Mass announcements.

A few messages in, Joe interrupts himself. "I'm sorry. Have you guys heard of the Who? They rock! They're unbelievable! I heard them for the first time on Thursday and I haven't slept since." He begins to tell a story as the action cuts to a flashback of Joe washing the dishes.

A classic rock radio station is on and the three massive chords at the beginning of "Baba O'Riley" ring out. Joe pauses. There's a close-up of that incredibly attentive expression of his as he moves toward wonder and awe. He slowly bobs his head to the rhythm of the song, grinning.

This unfolding of his discovery is slow and measured, the camera Joe lingering for longer than you'd expect in such a brief episode. I'm reminded as I watch this again of how theologian Walter Burghardt defined contemplation: "a long, loving look at the real." Or, in this case, a long, loving listen.

Joe's excitement escalates as he runs to call the radio station, bouncing in place. "What was that song you just played?!" he asks the incredulous DJ, a stand-in for us, the skeptical viewers: He must know this song, right? Everyone knows this song.

Next comes a montage of Joe calling every radio station in town with the same request. He pours himself a hilariously small glass of wine. He dances with his dog and the pizza delivery guy. It's wilder than we ever see Joe in any other episode. Pure joy.

We cut back to church. Joe's not at the lectern anymore, but pacing back and forth in front of the altar holding the podium microphone. More flashbacks: clips of Joe sharing the song with his grandmother, his neighbor friend Mike and his soon-to-be girlfriend, Sarah.

In the present, Father Andrew has approached Joe and is gently attempting to get the Mass back on track. The pastor says that "Baba O'Riley" must be quite a song, and that he hasn't heard it before, either.

Joe, having learned in the intervening days that pretty much everyone else knows it, starts to sing it a cappella. He looks to the congregation with a hint of expectation. They all join in the song for a few lines before Father Andrew more firmly asks Joe to return to his pew.

The episode ends with Joe driving away from church, the song playing on his newly installed car CD player.

I'm fascinated by Pera's creative decision to set this episode in the middle of the church announcements. The setting certainly adds a level of humor as the typically reserved Joe takes over the Mass proceedings. There's also some dramatic tension: What are the priest and parishioners going to do?

I love how the structure brings a "secular" song into the "sacred" liturgy; big-S Sacrament collides with the small-s sacramental ritual of hearing an incredible "new" song and playing it for your friends.

I understand if my description of the show makes Joe seem Pollyannaish, but it's more complex than that. As the show moves into seasons two and three, some darker themes develop: death, marital discord, anxiety, the divide between American rural and urban life. Joe takes in everything as it comes, both supportive of his friends and open to receiving support from them himself.

Many of the most poignant moments in the final two seasons involve Joe's girlfriend, the middle school band teacher, who is a doomsday prepper and as suspicious of others' intentions as Joe is trusting. Their growth together despite these differences is as tender a depiction of romantic love as you'll find anywhere in contemporary media.

Joe is certainly old-fashioned and a maybe a bit naive. But I think the best word to describe Joe is "holy," especially if you use author Marilynne Robinson's definition of the word: "What I might call personal holiness is, in fact, openness to the perception of the holy in existence itself and, above all, in one another."