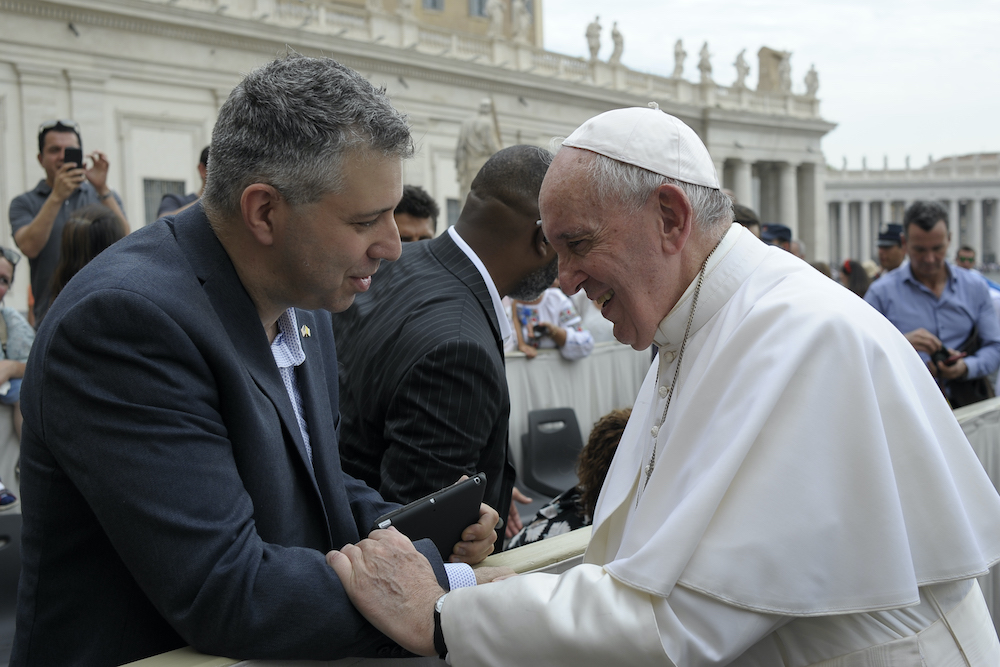 There was a quaint time before the coronavirus pandemic when Pope Francis would travel around the world. People would gather in large groups, sometimes in the millions even, just for the chance to see him.

The pontiff would highlight pressing international issues and help cement peace accords (see, for example, the 2015 visit to Cuba and the U.S., the 2017 visit to Colombia or the 2019 visit to North Macedonia). But he would also meet with people at the margins, and, sometimes, change their lives in uncountable ways.

A new documentary with the simple title "Francesco" has at its center those people. Although it also tells much of the wider story of the papacy of the former Argentinian Cardinal Jorge Bergoglio, it focuses most on how the pope from Buenos Aires has affected those he has met in places around the world.

One focus: Myanmar's displaced Rohingya community, members of which Francis met in Bangladesh in 2017. Another: the 12 Muslim refugees the pope brought to Italy at the end of his visit to a refugee camp on the Greek island of Lesbos in 2016. And one more: clergy abuse victims Francis originally incensed during his 2018 visit to Chile.

The film's director Evgeny Afineevsky told NCR that as he set out to tell the comprehensive story of Francis' now seven-year papacy, he realized, "I wanted to tell it through the people whose hearts and minds he touched in his actions."

It appears obvious that Afineevsky, who previously directed the 2017 documentary "Cries from Syria" and the 2015 documentary "Winter on Fire: Ukraine's Fight for Freedom," would bring forth the most people from society's margins.

Three moments in particular stand out in "Francesco," which tacitly acknowledges that we now live in a time without papal travel by showing stunning images of streets around the world emptied due to lockdowns. (The film ends and begins with the equally stunning images of Francis alone in St. Peter's Square, offering a special Urbi et Orbi blessing at the beginning of the pandemic in March).

One moment is a lunch Francis held with the 12 refugees he brought home from Lesbos, a few months later. The pope is surrounded by the three families' children, who show him haunting crayon drawings, displaying young lives of immense suffering.

In one of the film's interviews, Nour Essa, a young woman and one of the former refugees, is understandably unable to find words to explain how their lives have been changed.

Another moment comes as Francis is greeting 16 Rohingya Muslims in Bangladesh in 2017. The pope made the visit after traveling first to Myanmar, where the government has destroyed the minority community's villages, killed thousands and forced nearly a million to flee west to Bangladesh. 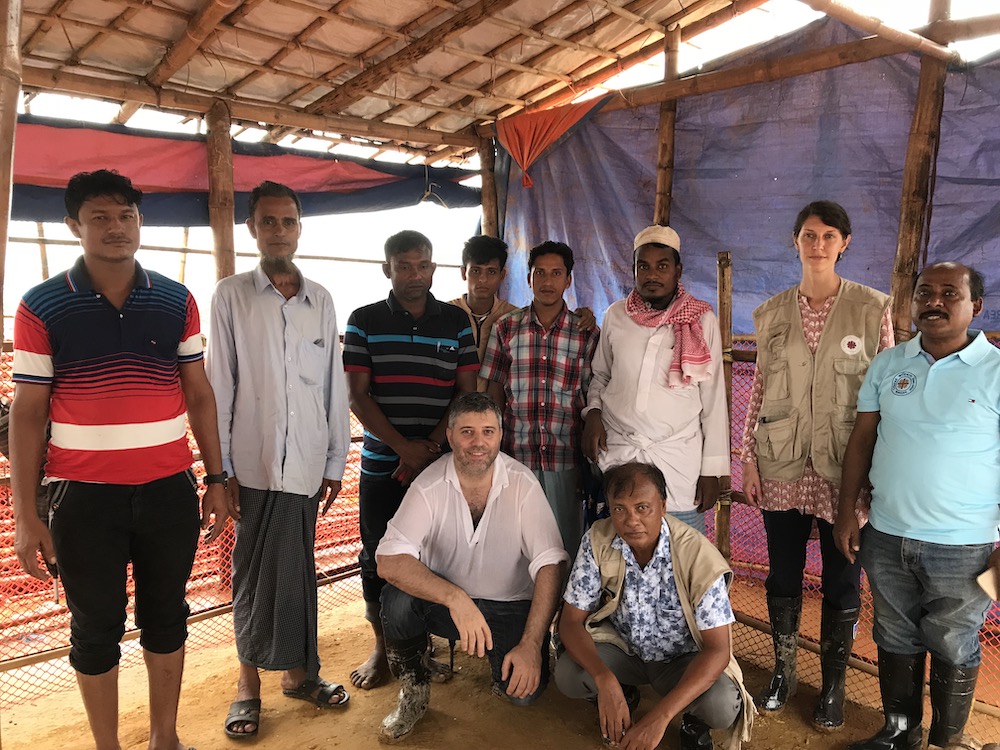 Film director Evgeny Afineevsky, at center, poses with several members of the Rohingya minority community who met Pope Francis in Bangladesh in 2017 and are featured in the film "Francesco" (Provided photo)

As the pontiff greets the refugees one by one, the camera catches Francis wipe a tear from his eye. It also catches him make an angry outburst at a Vatican security official, who appears to be trying to rush the meeting along so as to keep the pope on schedule. Francis raises his finger and shouts "Respect!" at the official several times.

In another of the film's interviews, one of the Rohingya who met with Francis says: "From the depths of my heart, I am very appreciative for what he has done. May Allah bless him so he can speak up for all the persecuted people in the world."

The third moment of the film is more than a moment. It is a period of months and years in which Francis erred badly, admitted it and then began to take action to correct his error.

This begins, of course, with the 2018 papal trip to Chile, when the pope defended a bishop accused of covering up for an abusive priest. Upon returning home, Francis realized something had gone wrong and sent Maltese Archbishop Charles Scicluna to investigate the case. The pope later solicited resignations from Chile's entire Catholic episcopacy. 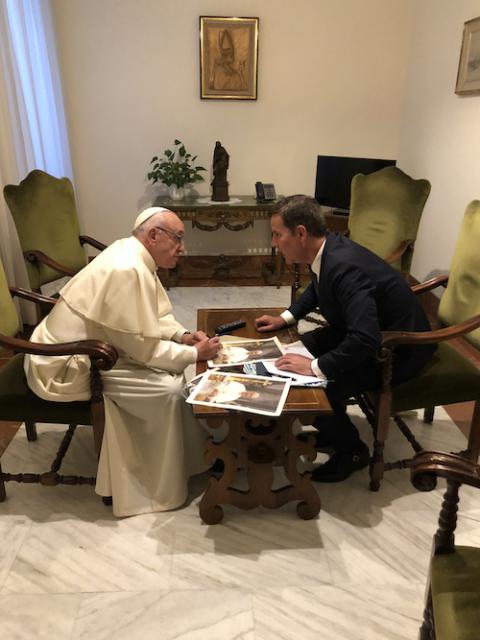 The film's guide to the Chilean episode are Scicluna and Chilean survivor Juan Carlos Cruz, who describes in the movie how the pontiff apologized to him during an emotional three-hour encounter at the Vatican in April 2018.

Cruz, who has now met with the pope on various occasions, told NCR that Francis "has strengthened a faith that I never wanted to lose and that I was in such jeopardy of losing."

"He is a man like no other," Cruz said of the pope. "I don't have the words to say how much he's changed my life."

Afineevsky said that he sees the scene of Cruz and Francis' first encounter as something like the center of his film's narrative.

"Juan Carlos Cruz helped Pope Francis to realize a lot of things about the church that had been hidden," said the director. "What is beautiful about Francis is that at his age he is still open to learning."

"I applaud Pope Francis, who … has been able to stand alone and admit mistakes, which is very difficult for leaders to do," said Afineevsky.

"Francesco" had its global premier at the Rome Film Festival Oct. 22. It will have its North American premiere Oct. 25 as part of the SCAD Savannah Film Festival. Those wishing to take part in the Savannah event can buy tickets virtually, which grants a six-day window to stream the film at home.

Afineevsky said he and the other filmmakers were hoping to release the film to theatres after premiere season, but are now working on a deal to offer it via a streaming service.

The director said he feels a special obligation to offer the film as widely as possible, given how the coronavirus pandemic has affected the pope's ability to travel.

"If before he was able to travel to every periphery in the world, right now, only his words can travel," said Afineevsky. "That's why for me releasing the movie right now was so important — so that his words and his actions can travel around the world."