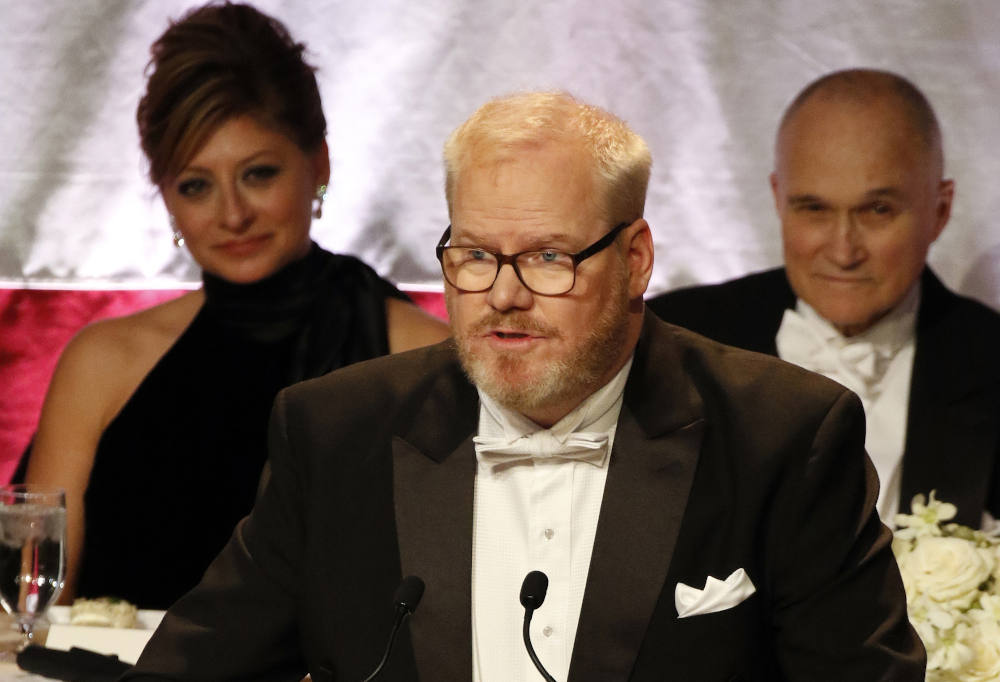 Editor's Note: On Sunday night, three days after firing off a series of tweets opposing President Donald Trump's reelection, Jim Gaffigan addressed on his Facebook page why he did it in a lengthy post. You can read the full post here.

Jim Gaffigan could take it no more.

The every-dad Catholic comedian who tells jokes about food, being pale and avoiding too much activity on Thursday night pivoted to politics, a realm where he seldom, if ever, goes. But this night on Twitter he let out a flurry of invective-filled tweets as the Republican National Convention came to a close and after President Donald Trump made a case, laden with falsehoods, for why he deserves four more years in the White House — itself the spot from where he spoke and which he transformed from a national symbol into a political asset.

That simple tweet from a comedian with an avid following among Catholics set off a series of two dozen more over an hour that repeatedly called the president "a liar," "a crook," "a con man" and "RADICAL," and called out Trump supporters, even those among his own fans, to wake up.

He lashed at Trump for lying, "constantly." He blasted the president's daughter Ivanka and her husband/senior adviser to the president Jared Kushner for being part of the same elite class that Trump supporters regularly revile. He accused Fox News of gaslighting and silencing Trump's critics. He said the president has been "incompetent" during the ongoing coronavirus pandemic, has buddied up to dictators, intentionally creates enemies and drove former House Speaker Paul Ryan out of politics.

"Trump talks about the Space Program and you can't safely go to a movie. Wake up," Gaffigan tweeted.

And he dropped a few F bombs.

"I don't give a [expletive] if anyone thinks this is virtue signaling or whatever," Gaffigan wrote. "We need to wake up. We need to call trump [sic] the con man and thief that he is."

The online barrage fast became a trending topic on Twitter. It also caught many fans off-guard, especially those who share Gaffigan's faith.

It was the type of explosion of insults and truth-telling that many might expect from the other prominent Catholic comedian, Stephen Colbert, who has made confronting Trump and his administration a regular nightly occurrence on his late-night talk show over the past five years.

The mild-mannered Gaffigan, on the other hand, has built his reputation on wholesomeness. He's seen as "the clean comedian," one families can listen and laugh to together. He makes regular appearances on CBS Sunday Morning. His short-run sitcom was a big hit with Catholic audiences, and even included an appearance by New York Cardinal Timothy Dolan. And he certainly never curses, at least in his act.

But not this night.

Gaffigan too turned his attention to fellow Catholic and Notre Dame icon Lou Holtz, the former football coach who on night three at the convention alleged that Democratic nominee Joe Biden was "Catholic in name only" due to his political stance on abortion.

"[Expletive] Lou Holtz. Biden is Catholic in name only? Compared to who?" Gaffigan said in a tweet that also questioned whether Trump himself had paid for abortions or raped women.

The tweet elicited a reply from his wife and comedy co-writer Jeannie who said "no need to curse tho."

Earlier in the day, the president of the University of Notre Dame also pushed back against its former coach's framing of Biden, albeit more tactfully than Gaffigan.

"While Coach Lou Holtz is a former coach at Notre Dame, his use of the University's name at the Republican National Convention must not be taken to imply that the University endorses his views, any candidate or any political party," said Holy Cross Fr. John Jenkins in a statement. "Moreover, we Catholics should remind ourselves that while we may judge the objective moral quality of another's actions, we must never question the sincerity of another's faith, which is due to the mysterious working of grace in that person's heart. In this fractious time, let us remember that our highest calling is to love."

Gaffigan has never hidden his Catholicity from his comedy. In fact, he's done just the opposite in making it one of the common topics he turns to again and again in his acts.

The Gaffigans have a large Catholic family of five children. (He's told jokes about them, too.) In recent years, they have taken their full family on tour with them, and they talk openly about their faith, especially as Jeannie Gaffigan overcame a brain tumor. She even wrote the forward for a handbook on Catholic hipsters.

Gaffigan served in 2018 as master of ceremonies at the 73rd annual Alfred E. Smith Memorial Foundation Dinner, a charity gala/political roast held in election years by the New York Archdiocese for the benefit of needy children. In 2016, the Gaffigans received honorary doctorates from the Catholic University of America and delivered the commencement address. The year before, he was on a stage telling Catholic-themed jokes to a crowd of millions stretched along on the Benjamin Franklin Parkway in Philadelphia as an opener to Pope Francis on the final night of the World Meeting of Families.

All that has worked to cement a sort of Catholic seal of approval on Gaffigan. On Thursday night, he appeared cognizant of that image, but made clear it would not hold him back.

Gaffigan went on to engage with some of his followers who pushed back on what he was saying or how he was saying it. Well after midnight, he was ready to call it a night.

By morning, stories and posts continued to react to the out-of-character posts. Many praised him for speaking out, with some writing that he gave voice to the moral urgency of the moment. Fellow comedians came to his defense, standing up for his character but also arguing the severity of the situation to push Gaffigan to go off.

Over on Gaffigan's Twitter timeline, though, the comedic content had returned, with one of his more topics du jour, food:

The jokes may be beyond the pale, but Gaffigan's views on the coming election were as clear as day for everyone to see.

A version of this story appeared in the Sept 18-Oct 1, 2020 print issue under the headline: The night that broke Jim Gaffigan.