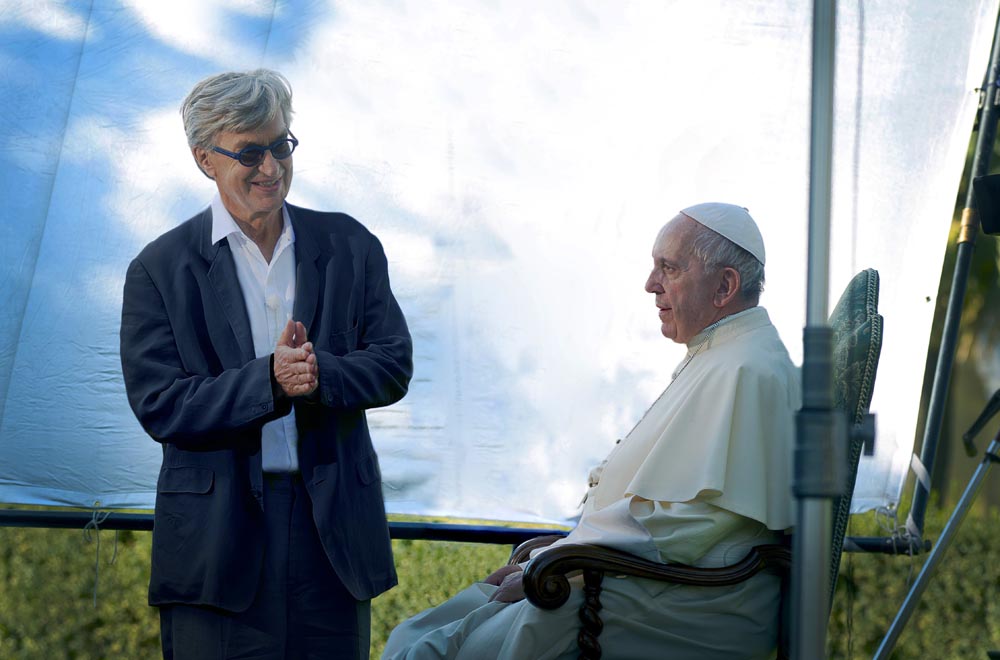 German filmmaker Wim Wenders is pictured in this undated photo with Pope Francis during the production of his documentary film, "Pope Francis: A Man of His Word." (CNS/Vatican Media, handout)

"Pope Francis: A Man of His Word," a new documentary from Oscar-nominated and award-winning director Wim Wenders, is a cinematic pulpit for Pope Francis to share his deepest spiritual and moral concerns about the human family and the earth, our common home.

There is very little biographical information in the film about Francis, born Jorge Mario Bergoglio on Dec. 17, 1936, in Buenos Aires, Argentina. It does show his election as pope on March 13, 2013, the first pope ever elected from the Americas, from the Southern Hemisphere, the first Jesuit and the first pope to ever take the name of Francis in honor of St. Francis of Assisi. It is curious that there is no mention of the fact that Francis is the first pope to have been ordained a priest after the Second Vatican Council (in 1969). This fact, to me, is highly significant to Francis' theology, which is always infused with such pastoral care — the premise of the film.

The film is framed by Francis' taking the name of St. Francis of Assisi. It opens in the Umbrian city, with a voiceover reflection that seems drawn from Francis' 2015 encyclical "Laudato Si', On Care for Our Common Home." It then melds back and forth into a contemporary dramatization, though in the style of an old black-and-white silent film, of scenes from the life of St. Francis. Wenders, known for his artistry, makes a wise choice here for an otherwise wordy film.

Words create the inherent contradiction of the film. In Wenders' film, the emphasis is on the words of Francis over five years of his papacy, exhorting people of good will to be good and just, to do good. We see the pope washing the feet of prisoners and the homeless, visiting impoverished areas on his travels, touching the sick, greeting and speaking in very moving terms to prisoners. His words encourage us to do what he cannot, and this is to create a culture of care for our neighbors in this world, both near and far. 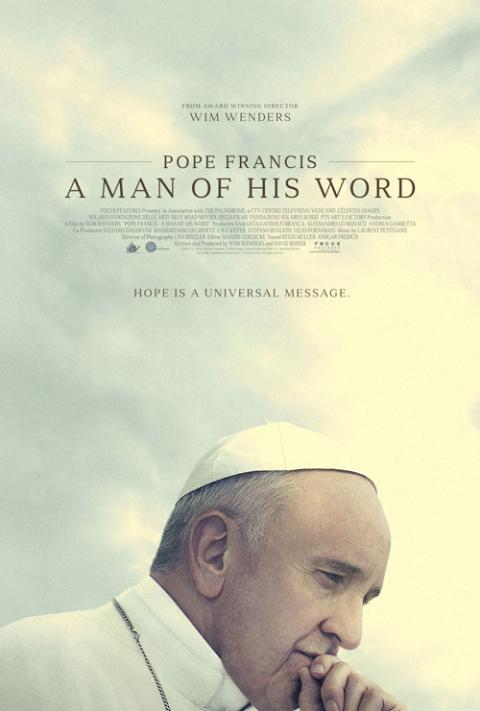 Art for the movie "Pope Francis: A Man of His Word." (CNS/Focus)

The papal themes that Wenders has chosen for this 96-minute documentary are those that Francis talks about most often and that can be found in both the life of St. Francis of Assisi and Catholic social teaching: human dignity, the common good, solidarity, subsidiarity, justice, the family, community, participation, work and the dignity of work, the right to life, security, food, care for the earth, and the right to clean earth, water and air. His interreligious meetings with faith leaders are also included.

There are two long interviews included in the film that Wenders cuts in with footage from his travels. At times Francis looks tired or burdened when he speaks directly to the camera; the best shots are of him speaking to people without consideration for the camera's intrusion.

One of the most impressive scenes in the film is one we see too often: people climbing and sifting through mountains of garbage to find something to sell. The pope wants us to know that the "policies of exclusion of the poor who are then marginalized to live off leftovers" has created a "culture of waste." Each one of us is responsible for this culture of waste, he says. "No one can serve two masters," he reminds us. He wants the world to live in the harmony of creation because we are not called to dominate creation but to be caretakers of it. He also speaks of suffering, though his response is at once mysterious and simple: he points to the crucifix.

Francis' esteem for science is strongly showcased in the film and he warns governments that they are to pay attention to what science is telling us about the earth because God gave us the ability to investigate, think and act. The film leaves no doubt of Francis' concern for the earth. 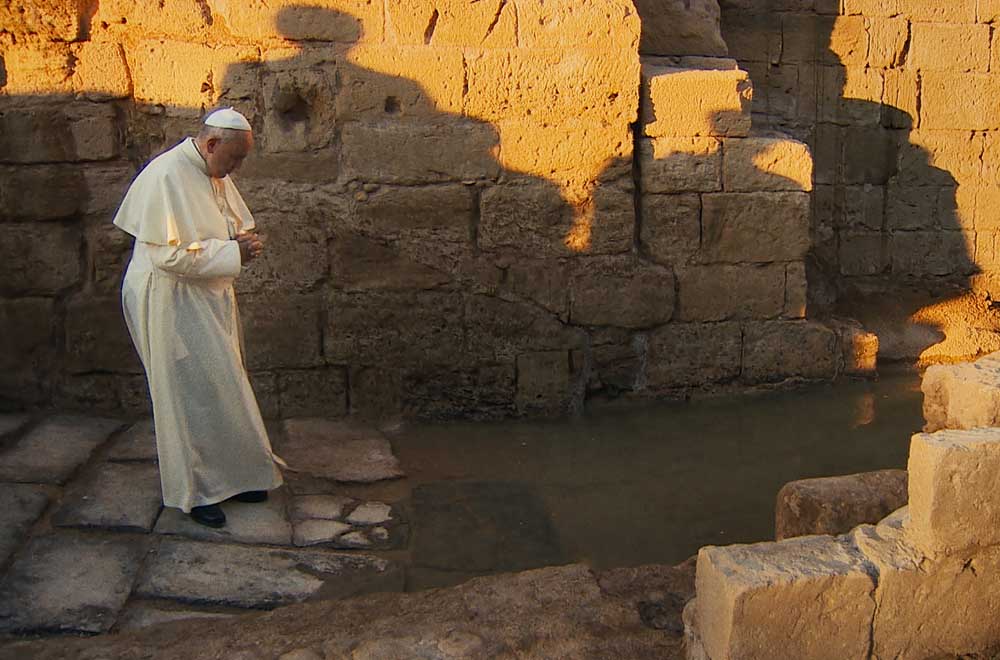 Pope Francis stars in a scene from the documentary "Pope Francis: A Man of His Word." (CNS/Focus)

Francis' visit to the islands of Lampedusa, Italy, and Lesbos, Greece, draws our attention to the global refugee crisis that Francis reminded members of the House and Senate about in 2015. He also spoke of the rights of our indigenous peoples, to welcome strangers, and the need to stop the self-destructive international trade in armaments.

The scene of his response to the journalist's question on the papal plane about the "gay lobby" is included: "If a person is gay and is searching for the Lord and has good will, who am I to judge? We must be brothers to each other. The Catechism of the Catholic Church explains this beautifully. It says no one should be marginalized for this; they should be integrated into society."

He also addresses the role of women. "Women had a distinctly different way of looking at things than men. I have had consultant meetings about a given problem with male members and then with female members. The input of the women is extraordinarily rich! It's necessary. The world cannot go ahead if there is no complementarity or reciprocity between men and women. … We have to integrate women! Because a world without the leadership, advice and vision of women cannot advance."

To experience "Pope Francis: A Man of His Word" is like watching a homily, yes, but the film has a mystical, poetic, contemplative quality to it. It is not about strategic plans but the lived faith, hope and love of Francis in imitation of St. Francis of Assisi. He is in turn funny, loving, concerned and grave. I would like to know more personal stories of the pope's interaction with people and nations, yes, but this film shows me his heart, the breadth of his spirituality, the quality of his character. The film was completed, of course, by the time Francis issued an apology to the victims of clergy sexual abuse in Chile and admitted making grave errors in his assessment and perception of the problem. This film reveals the pope as a man with the insight and ability to admit such personal failings to the entire world.

The greatest gift he gives in this film is hope for the future. I envision this film being used for meditation, retreats and in catechesis. People who are curious about Francis and newcomers to the church via the RCIA program will learn that our pope is human, a man who walks among us, trying his best to follow the Lord Jesus.

What are the two ingredients for a happy life? For Francis it is a smile and a sense of humor, but he really has to stop with the mother-in-law jokes. This, perhaps unfortunately, shows that the pope's world is still a man's world. There is work to be done. Why Wenders would include this remark perhaps says a lot about himself as a filmmaker. One can only wonder what a woman's directorial vision might have brought to this nevertheless beautiful film.