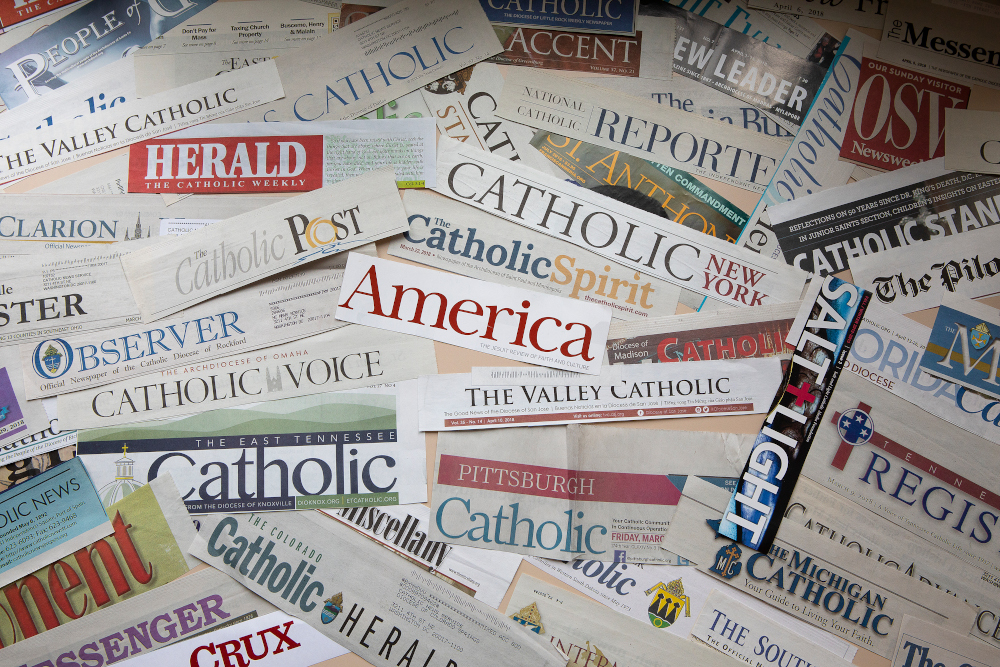 Local journalism outlets, including diocesan newspapers, are being touted as vital information sources during the COVID-19 pandemic worthy of being included in a new round of federal emergency aid.

"If there ever was a time for community news, it's now," said Michael Copps, a former member of the Federal Communications Commission and onetime consultant to the U.S. bishops' Committee on Communications.

Copps was one of three representatives of media advocacy groups whose signatures headed an April 8 letter to congressional leaders seeking federal assistance so that struggling local news outlets can continue to deliver vital information to the communities they serve.

The letter "absolutely" was meant to include Catholic and religious media, Copps told Catholic News Service.

"There's no substitute for (local journalism)," said Copps, now a senior adviser to the advocacy group Common Cause.

Proposals to support local journalism took on renewed significance in recent weeks as news outlets — newspapers in particular — have seen a precipitous decline in advertising revenues. With reduced income, news outlets have had to lay off editorial and sales staff, reduce hours and cut salaries in an effort to stay viable.

The Poynter Institute reported that more than 70 community newspaper sites had laid off or furloughed staff, cut the frequency of publication or suspended publication altogether since the pandemic hit. Layoffs also have affected radio, television and digital media, but have not been as extensive as those in print journalism.

Two diocesan newspapers — Pittsburgh Catholic and Catholic Outlook in the Diocese of Tucson, Arizona — have ceased publication. Officials in both dioceses cited the pandemic in part for their decisions.

"Every community is different and nothing demonstrates that more starkly than the current coronavirus pandemic," Copps said. "Local communities need to know how it is affecting their neighborhoods, how diverse parts of the economy are reacting, what they are doing to protect themselves, their livelihoods, to get good information and keep safe."

The letter from the advocacy groups, signed by representatives of 45 other organizations and scholars, cited the important role local journalism plays in providing vital information during an emergency. It also said the pandemic has accelerated the decline local news outlets have been experiencing for years, causing about one in four local U.S. newspapers to close since 2005.

The advocates' letter came as a group of 19 senators made a similar plea in early April to Senate leadership to include funding to support local journalism and media in any future emergency aid bill. "Without this support, communities across the country risk losing one of their key sources of accurate information about what citizens need to know and do in response to the COVID-19 pandemic," their letter said.

Both letters particularly pointed to the need for funding to be used specifically to keep reporters and editors on the payroll so they can continue practicing timely independent journalism at both commercial and nonprofit outlets.

Beyond such a measure, the advocates called for increased federal funding for the Corporation for Public Broadcasting to support public and community media; support for media that serve African American and Hispanic, immigrant, indigenous, rural and working-class communities; and a boost in spending for public service advertising to deliver public health and government messages.

Congressional negotiations on a new aid package — the fifth since the pandemic began coursing through the economy and wreaking havoc on personal lives — have bogged down as Republicans and Democrats have tried to align priorities to the nation's needs. Officially, Congress is scheduled to reconvene April 20. However, President Donald Trump agreed to extend social-distancing guidance until April 30, which may delay Congress' return.

J.D. Long-Garcia, president of the Catholic Press Association, told CNS in an email April 9 that the organization does not "have any plans on taking a position on local journalism being supported by emergency bill funding."

"We've been focused on how we can support Catholic media professionals, including education, forming a COVID-19 task force and advocating for our media outlets in different ways. It's an important time for Catholic media to rally together, especially as our organizations face financial hardships. We've seen some of our members hit pretty hard already," he wrote.

Indicative of the financial stresses in the publishing industry, Catholic publisher Bayard Inc. announced April 9 it was ceasing print editions of four magazines: Hopeful Living, Catholic Digest, Catechist and Today's Catholic Teacher. The final print issues of each title will span the period from May to mid-summer. Online versions of Catholic Digest and Catechist will continue, however.

"There is no link with the COVID-19," he explained. "It's part of a long process that we have been looking for. At the moment you need to choose where you have to invest."

De Foucauld declined to say how many people would lose their jobs, acknowledging only that the changes will secure the company's future. "It's a painful decision for us. It's a decision that has to be done. I'm most respectful of those people who are going a great job," de Foucauld said.

"We do have the energy and people enough to prepare carefully for the future."