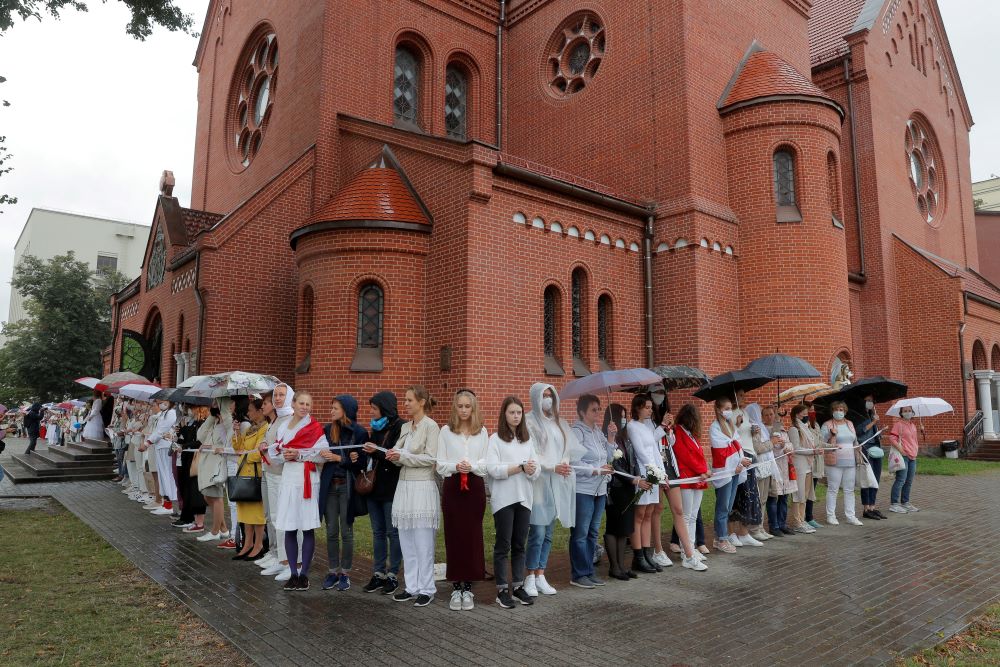 Women form a human chain in front of Sts. Simon and Helena Church in Minsk, Belarus, Aug. 27, 2020, during a protest against presidential election results. Police and local authorities in Minsk closed the capital's best-known Catholic church, known as the Red Church, after a suspicious fire in September 2022 and ordered all religious objects removed. (CNS/Reuters/Vasily Fedosenko)

Christian dissidents in Belarus, an eastern European country closely allied with Vladimir Putin and the Russian Federation, have published a collection of unanswered appeals to the Vatican about the atmosphere of repression in their country, highlighting a growing disillusionment with papal diplomacy.

The 60-page book, published in London in October by the organization Christian Vision, includes an August 2021 prison cell plea to Pope Francis by a Catholic political prisoner, Ihar Losik, and another from the jailed human rights campaigner, Ales Bialiatski, winner of the 2022 Nobel Peace Prize.

Also included is a lengthy December 2020 letter to Francis by Belarus's exiled opposition leader, Sviatlana Tsikhanouskaya, requesting the pope offer prayers and a "genuine word of truth and justice."

In August 2020, Belarus' authoritarian president, Alexander Lukashenko, was returned to power for a sixth time in rigged elections, triggering a wave of protests in which Catholic voices were conspicuous.

At Rome's behest, however, the church has since been largely silent, in what's widely seen as an attempt to appease Lukashenko's regime. 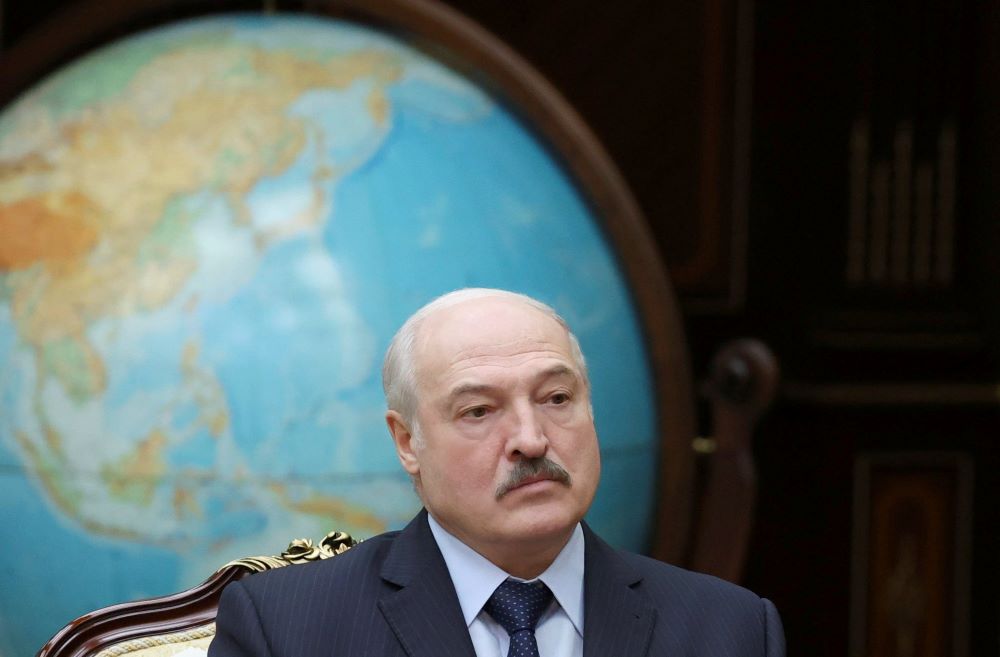 Belarusian President Alexander Lukashenko, the country's first and only post-Soviet head of state, was declared reelected in 2020 after 26 years in power. Catholic bishops condemned the ensuing crackdown on political opponents. Lukashenko is pictured in a Nov. 30, 2020, photo. (CNS/Reuters/Maxim Guchek/BelTA)

The regime retaliated by barring the church's leader, Archbishop Tadeusz Kondrusiewicz of Minsk-Mohilev, from re-entering the country after a visit to neighboring Poland.

Kondrusiewicz was finally allowed back that Christmas, after discreet Belarus visits by Archbishop Paul Gallagher, the Vatican's foreign minister, and by a veteran Vatican diplomat, Archbishop Claudio Gugerotti.

Just two weeks later, however, Kondrusiewicz was made to retire on his 75th birthday, giving way to Archbishop Yusof Staneuski, a younger and more accommodating figure.

When Lukashenko, post-Soviet Belarus' first and only head of state, was declared reelected in 2020 after 26 years in power, bishops from the Catholic Church, comprising about 15 percent of the population of 9.4 million, condemned the ensuing crackdown on political opponents.

A new Vatican ambassador to Belarus, Croatian-born Archbishop Ante Josic, had meanwhile arrived in Minsk, the capital of Belarus, after helping negotiate Rome's controversial 2018 agreement with China, which gave the communist government a say in the appointment of Catholic bishops. 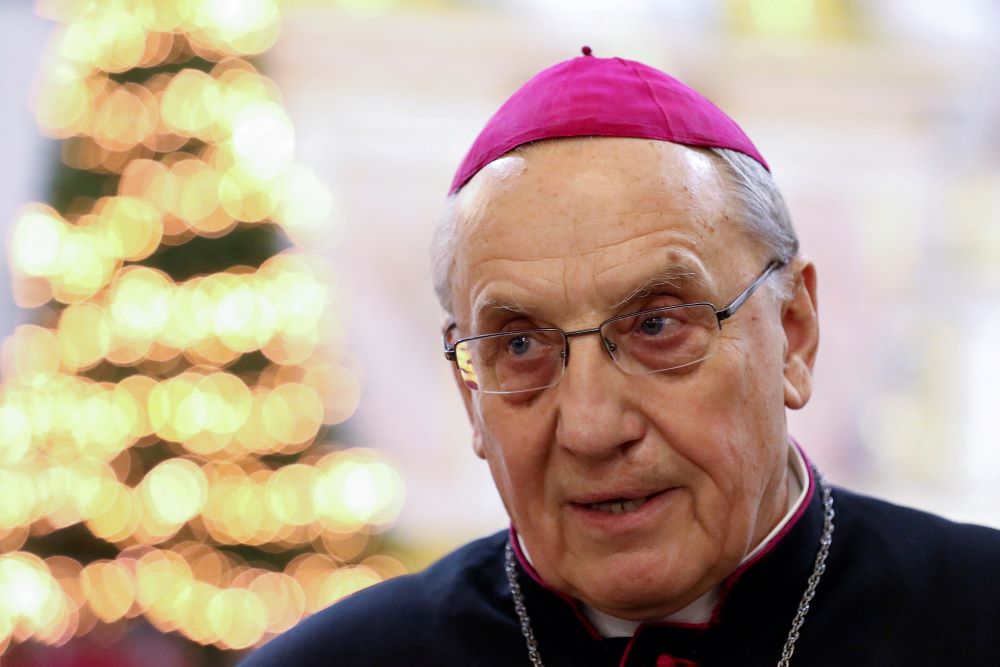 Archbishop Tadeusz Kondrusiewicz speaks to reporters at his cathedral after returning to Minsk, Belarus, Dec. 24, 2020. He had been barred from reentering his country on Aug. 31, 2020, amid mass protests over a dubious election. Two weeks after Kondrusiewicz returned to Belarus, he was made to retire on his 75th birthday. (CNS/Reuters)

And while Josic has since avoided media interviews and left no clear record of his intentions, many Belarusians believe he has followed an overly cautious approach in diplomatic contacts with Lukashenka's regime.

Although at least 10 priests have been arrested, along with many prominent lay Catholics, the Vatican embassy in Belarus has not reacted publicly.

At an embassy reception on Nov. 11 marking three decades of diplomatic ties, by contrast, Josic enthused about how the history of Vatican-Belarus relations was being "supplemented with new wonderful pages."

And when Belarus' foreign minister, Vladimir Makei, a man accused by opposition leaders of endorsing mass repression, died suddenly on Nov. 26, the ambassador celebrated a special Mass for him — a gesture not extended to Vitold Ashurak, a Catholic political prisoner who died of mistreatment in May 2021. 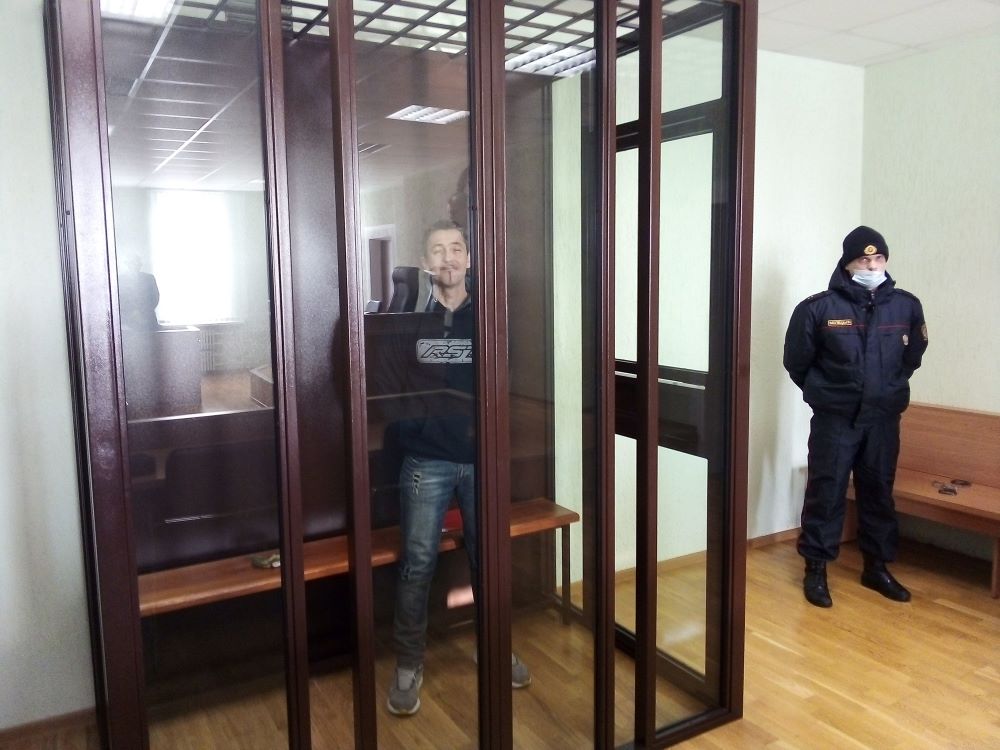 Vitold Ashurak, a prominent Catholic protester, is seen in a glassed room during his trial in Lida, Belarus, Jan. 18, 2021. Ashurak was jailed and died while in custody. (CNS/Courtesy of Volha Bykouskaya)

Vasilevich said her group had yet to hear any response from the Vatican about the Christian Vision book and called that hard to bear.

"The situation is worsening rather than improving, with ever more arrests and imprisonments — so it's essential the Vatican, as a strong moral authority, receives accurate information and says something," she told NCR.

"No one will arrest the pope or a Vatican diplomat for speaking their mind," said Vasilevich. "Viewed from Belarus, however, Rome seems more interested in good relations with the Lukashenko regime."

Some analysts wonder if the Vatican is trying to recreate its Cold War-era policy known as "Ostpolitik," which sought to engage the Soviet world in so-called "small steps" and offered some cooperation with repressive regimes in hopes of diplomatic concessions. They likewise wonder if the new version of the policy is working. 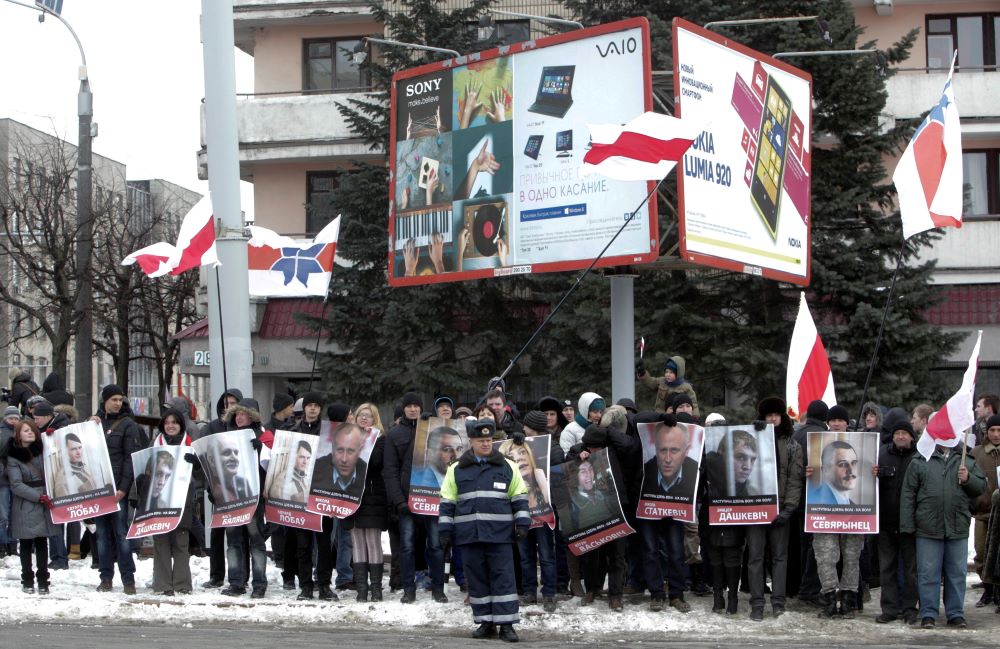 Participants are pictured in a file photo during a protest demanding the release of political prisoners in Minsk, Belarus. More than 1,400 political prisoners, including numerous Catholics, are believed to be held in the country's jails. (CNS/Reuters/Vasily Fedosenko)

At least 10,000 people are estimated to have been detained for protesting actions by Lukashenko's regime, which has faced ever tighter Western sanctions after lending its territory to support Russia's bloody invasion of Ukraine.

More than 1,400 political prisoners, including numerous Catholics, are languishing in the country's jails, according to a Nov. 24 resolution by the European Parliament, which listed "minors, persons with disabilities, pensioners and severely ill persons" as being held, and deplored the "systematic repression" aimed at silencing "all remaining independent voices."

In August, a Catholic primary school was forcibly closed in Minsk. In September the capital's landmark church of Sts. Simon and Helena, popularly dubbed the Red Church, was locked after a minor fire, and officials demanded the removal of all religious objects.

In an open letter to Lukashenko, local Catholics blamed the fire on "unidentified persons," and branded the church's closure an "improper and excessive reaction." 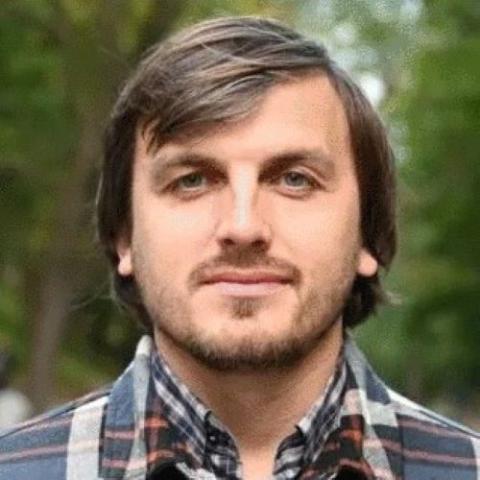 Artyom Tkaczuk, a Catholic social worker and campaigner, says the Vatican's stance has diminished Archbishop Tadeusz Kondrusiewicz, viewed as a significant witness to history during and after the collapse of communist rule. (Courtesy of Artyom Tkaczuk)

However, police also broke up a prayer vigil and threatened to arrest the church's 32-year rector, Fr. Vladyslav Zavalniuk, a veteran of Soviet-era exile and forced psychiatry, who responded with a hunger strike.

Although several Belarusian bishops have called for the Red Church's return, Josic's embassy told the Polish-based Belsat news agency it would not be making any statement about it.

For all its close ties with Russia, Belarus has little international clout. And when the church did speak out, after a scurrilous anti-Catholic cartoon appeared in Belarus' official Minskaya Prauda daily in September 2021, the regime duly reprimanded the newspaper.

"Of course, the Catholic Church is a minority here —it lacks the weight of its counterpart in Poland and has to follow the Holy See's instructions," Tkaczuk told NCR.

"But when so much is being said today about synodality, things look quite different here. While the Vatican concentrates on official diplomacy, and pressures local bishops and priests to conform, the Catholic community seems to count for very little," he said.

Tkaczuk thinks the Vatican's stance has diminished Kondrusiewicz, who was valued and trusted by Pope John Paul II, and is viewed as a significant witness to history during and after the collapse of communist rule.

When the slightest show of opposition can lead to arrest, it may be wiser to "act beneath the surface," as many Catholics now do, she said. But if conditions eventually change, the church's record of public witness will be examined, she said.

"Repression doesn't mean control — nor must we necessarily cooperate with a regime which merely relies on force," the Christian Vision coordinator said.

"The Vatican has clearly concluded that speaking out could harm the local Catholic community, so it effectively took the regime's side when Kondrusiewicz was hounded from office," she said. "Yet for all Rome's efforts, nothing has prevented the regime from acting against Catholics when it chooses."

Some observers are more upbeat.

When a Catholic mother of five, Volha Zalatar, was detained and tortured for running an internet chat site from her Minsk home, Josic visited her in prison, leaving a Bible and prayerbook.  And when 13 political prisoners were freed in September 2021, he welcomed the move as reconciliatory gesture. 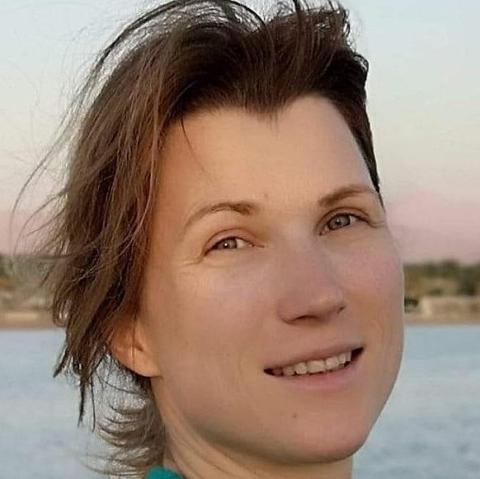 Volha Zalatar, pictured in an undated photo, was sentenced in Belarus to four years in jail for forming an "extremist group" and public order offenses. The Vatican ambassador to Belarus visited her in prison. (CNS photo/courtesy Volha Zalatar, Facebook)

Even at his celebratory reception on Nov. 11, Josic noted that certain "difficulties" still required "concrete solutions" and said Holy See would "support civil society" and help "preserve the rights of all citizens without distinction."

In his latest Advent message, Kondrusiewicz also spoke out more forcefully, calling for the return of Minsk's Red Church, as "a symbol of the Catholic Church in Belarus," as well as for "solidarity with the suffering and needy."

Whether this will ease the disillusionment is another matter.

In the latest regime acts against the church, the vice dean of its Mogilev deanery. Fr. Vitaly Chebotary, was sentenced to 15 days' administrative arrest, while a 69-year-old retired Catholic teacher, Ema Stepulyonak, received a two-year prison term for "insulting a representative of the government." 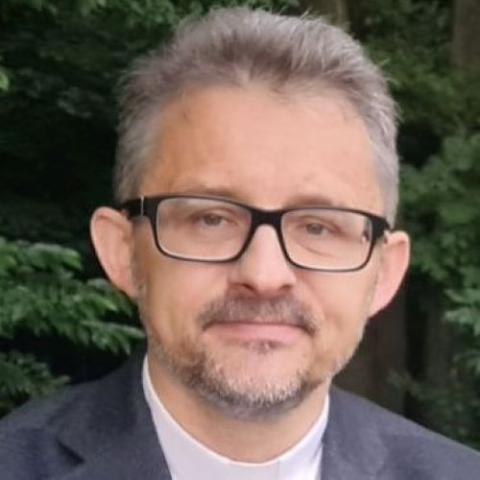 On Nov. 25, police arrived at Barok's parental home in Vitebsk, asking ominously whether the priest used drugs and alcohol, and when he planned to return to Belarus.

A version of this story appeared in the Dec 23, 2022 - Jan 5, 2023 print issue under the headline: Belarus dissidents question Vatican's dialogue with authoritarians.