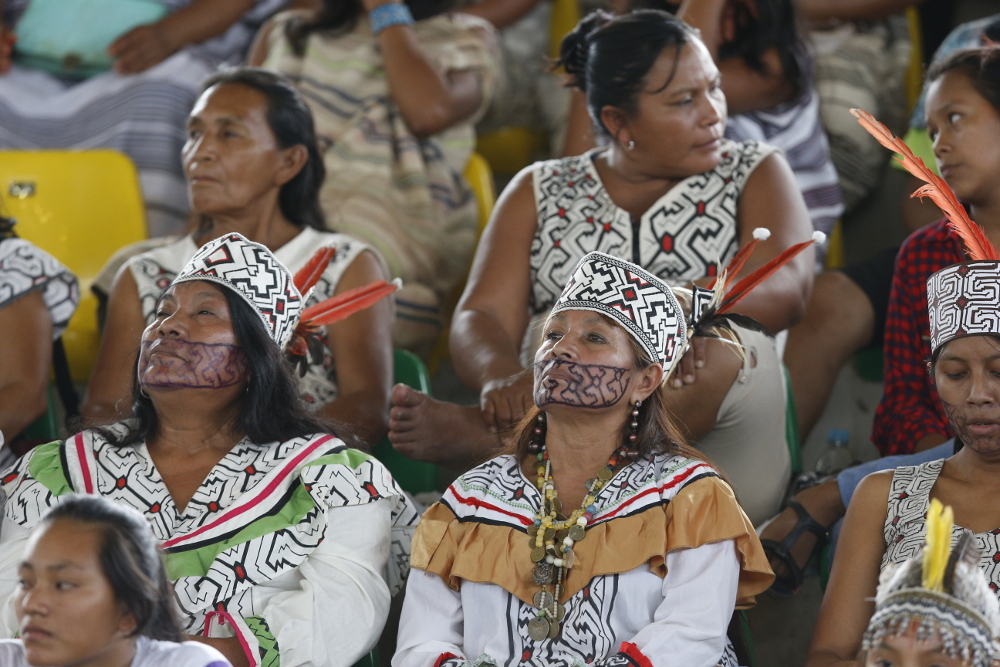 Members of an indigenous group from the Amazon region during a Jan. 19 meeting at Madre de Dios stadium in Puerto Maldonado, Peru. (CNS/Paul Haring)

Pope Francis stood among the indigenous peoples of the Amazon Rainforest Jan. 19 to criticize the ramp-up of the global extraction industry in the world's most biodiverse region and decry local policies that he said "strangle" its some 350 native tribes.

The pope met with about 4,000 indigenous in this small city near Peru's southeastern border with Bolivia, known as the gateway to the Amazon, and expressed support for proposals that would place large portions of the forest under native control.

"We have to break with the historical paradigm that views Amazonia as an inexhaustible source of supplies for other countries without concern for its inhabitants," Francis said in an address marked by criticisms of both exploitative global industries and national Peruvian policies.

"Great business interests want to lay hands on [the Amazon's] petroleum, gas, lumber, [and] gold," he said. "The native Amazonian peoples have probably never been so threatened on their own lands as they are at present."

The pope then lambasted local policies that he said operate "under the guise of preserving the forest, [but] hoard great expanses of woodland and negotiate with them, leading to situations of oppression for the native peoples."

"These problems strangle her peoples and provoke the migration of the young due to the lack of local alternatives," he said, speaking as Peruvian President Pedro Kuczynski sat in the audience.

"The indigenous peoples of the Amazon want to tell all of humanity that we are worried because due to the consequences of climate change the land is spoiling, the animals are shrinking, the trees are disappearing, the fish are dying, [and] the fresh water is running out."

Francis, who has made environmental protection a key focus of his papacy, came to the Amazon on his first full day in Peru, which he is visiting through Jan. 22 on the second leg of a weeklong journey abroad that started in neighboring Chile.

His speech to the indigenous, some of whom took part in the event bare-chested and sporting feathered headdresses, comes as the expansion of permitted construction of dams and roads has tied with illegal mining activities to turn large portions of the lush, verdant rainforest into contamination zones.

Puerto Maldonado's apostolic vicariate estimates that nearly 17 percent of the Amazon has been destroyed. In press materials, the vicariate said that a "spectacular increase" in the granting of mining permits in particular has shown an "arrogant disregard" for environmental conservation efforts and the protection of native peoples.

Francis also heard testimony from three members of different Amazon tribes. Héctor Sueyo and Yésica Patiachi of the Harakbut people spoke passionately about the pressure their peoples are under.

"We ask that you defend us!" Patiachi told Francis, to wide applause from the crowd.

Sueyo said they had a warning for the world: "The indigenous peoples of the Amazon want to tell all of humanity that we are worried because due to the consequences of climate change the land is spoiling, the animals are shrinking, the trees are disappearing, the fish are dying, [and] the fresh water is running out." 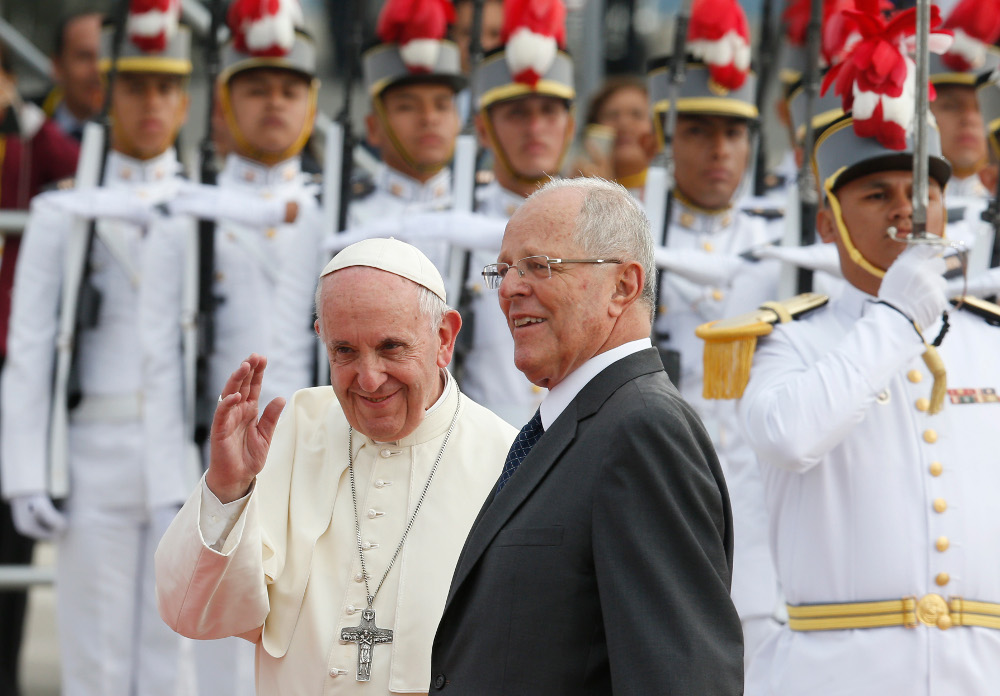 Earlier this week, leaders of three of the largest indigenous communities asked Francis to support their request for Peru to grant some 50 million acres in collective land rights to the indigenous.

The pope appeared to back that effort in his speech Jan. 19, noting "promising initiatives ... which advocate that the native peoples and communities themselves be the guardians of the woodlands" and would "benefit your families, improve your living conditions and promote health and education in your communities."

As he has at many times in his nearly five-year papacy, Francis also pointed out the effect carbon emissions have on both the local and global scale, saying that release of hydrocarbons after oil extraction and coal mining in the Amazon "gravely threaten the lives of your families and contaminate your natural environment."

"Your lives cry out against a style of life that is oblivious to its own real cost," the pope told the indigenous. "You are a living memory of the mission that God has entrusted to us all: the protection of our common home."

For his part, the pope promised that the Catholic Church "will never stop pleading for the outcast and those who suffer."

Francis focused on the environment in his 2015 encyclical "Laudato Si', On Care for Our Common Home," in which he accepted the wide scientific consensus on climate change and called on global governments to act.

Several world leaders have said the encyclical played a role in the success of the 2015 Paris agreement, which has been signed by 195 countries and obligates them to reduce carbon emissions and practice more sustainable development.

Sixty percent of Peru is located in the Amazon Rainforest, which also encompasses parts of Brazil, Colombia, Venezuela, Ecuador, and Bolivia. About 34 million people live in the Amazon, including some individuals and tribes in voluntary isolation.

The Puerto Maldonado vicariate said that more than 250 dam projects and 20 road construction projects have been approved in recent years, and more than 8,000 mining permits have been granted, with another 6,800 under review.

Francis was greeted at the event Jan. 19 by two dances from young indigenous peoples, whose arms and legs swayed to a slow incantation.

The pope began his address by naming 22 of the different Amazonian tribes he wanted to greet and then saying he had come to see the "deep wounds that Amazonia and its peoples bear." He asked the native tribes especially to protect those who have chosen voluntary isolation, calling them "the most vulnerable of the vulnerable."

"They went into seclusion in the most inaccessible reaches of the forest in order to live in freedom," he said. "Their presence reminds us that we cannot use goods meant for all as consumerist greed dictates. Limits have to be set that can help preserve us from all plans for a massive destruction of the habitat that makes us who we are."

Francis landed in Peru from Chile Jan. 18 to an enthusiastic welcome on the streets of the capital of Lima.

Tens of thousands of people lined miles of Lima's streets to try and catch a glimpse of the pope as he made his way from the airport to the apostolic nunciature, where he is spending his nights.

After arriving at the nunciature, Francis took to his pope-mobile a second time to try and greet more of the people on the streets, who were pushing against barricades and gathered rows deep, holding signs and offering small gifts or religious objects.

The reception in Peru made a sharp contrast to Chile, where the pope encountered protests each day in the country over his 2015 appointment of Bishop Juan Barros Madrid, who is accused of covering up sexual abuse by a fellow priest in the 1980s and '90s.

Francis will to return to Lima in the afternoon of Jan. 19 for a meeting with Kuczynski and will give a speech to him and the country's other political leaders. The pope travels Jan. 20 to Trujillo, in northwest Peru, for an outdoor Mass and a meeting with priests and religious.