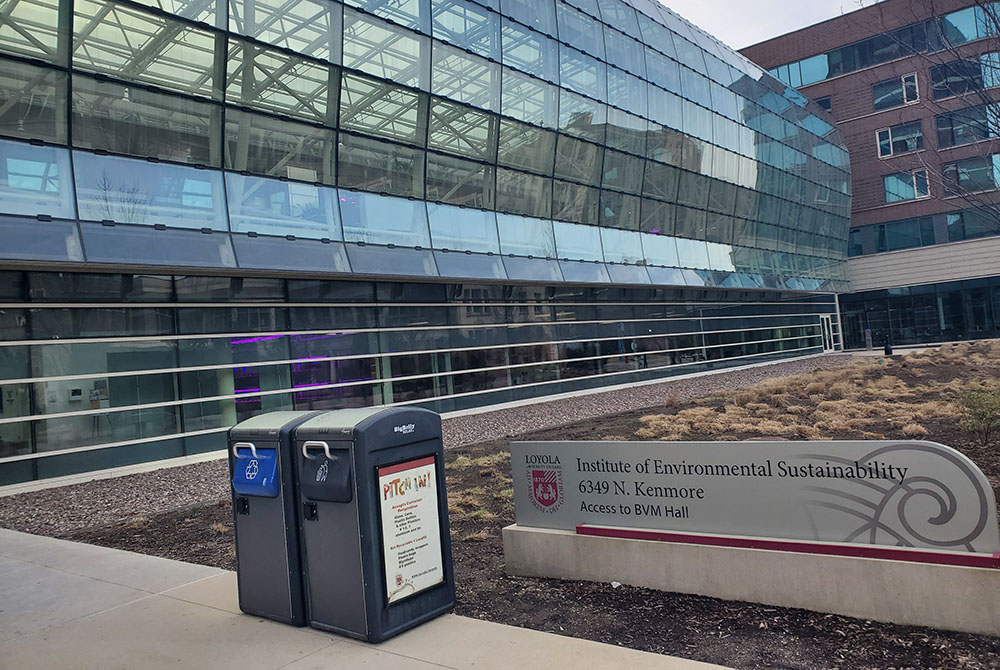 The Institute for Environmental Sustainability at Loyola University Chicago. The institute was set to host its sixth climate change conference March 12-13 before the coronavirus outbreak led to its cancellation. (NCR photo/Brian Roewe)

Inside a seminar room at Loyola University Chicago's Institute of Environmental Sustainability, phones beeped and buzzed Thursday with news of the latest cancellations and postponements as the coronavirus outbreak swept across the country.

A disinfectant towel in hand, dean Nancy Tuchman wiped a mic before she passed it to the first speaker at the morning's climate workshop. The small gathering of two dozen academics, Jesuits and community leaders — exploring the connection between Jesuit schools’ mission and community-oriented research — was meant to precede a larger two-day climate change conference that would bring nearly 900 people to this campus on the shore of Lake Michigan.

Ultimately, not even the best hygiene efforts were enough to immunize Loyola Chicago from the crush of cancellations overtaking academics, sports and cultural centers in response to the viral pandemic.

Organizers made the decision the afternoon of March 11 to cancel the Jesuit university's annual climate conference, set this year to highlight youth-led efforts and advocacy to address climate change. Among the scheduled speakers was Kelsey Juliana, the lead plaintiff in the Juliana v. United States lawsuit brought by 21 young people suing the federal government for its role in contributing to climate change. Only the workshop was held as scheduled. 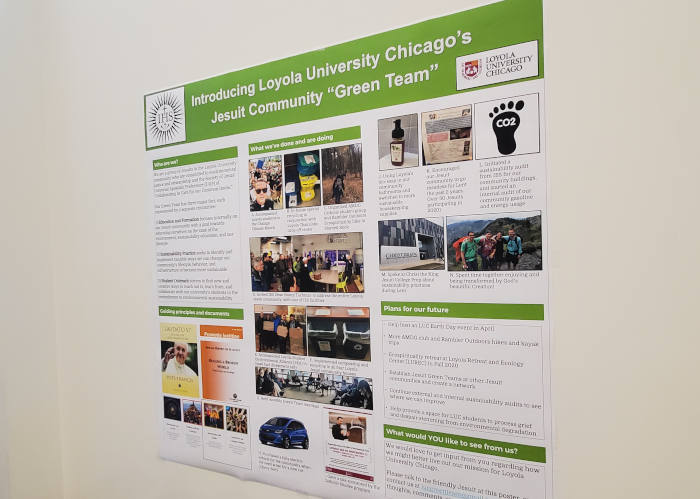 A poster highlights steps taken by the "green team" of the Jesuit community at Loyola University Chicago during a climate workshop at the campus' Institute for Environmental Sustainability. (NCR photo/Brian Roewe)

"While it is clearly in the best interest of all conference participants and the general public to cancel the conference we are disappointed not to be able to gather publicly to raise the voices of youth climate activists on campus," Tuchman said in a statement.

Less than 24 hours after the conference canceled, Loyola Chicago joined other universities in announcing all classes would move online and students asked to head home, effectively closing the campus for students for the rest of the semester. University leaders stated the decision was precautionary to stunt spread of the novel coronavirus, and they were not aware of any positive cases of COVID-19 at the school.

In the time since, Illinois Gov. J.B. Pritzker ordered every school in the state closed until March 30. Likewise, Chicago Cardinal Blase Cupich mandated the suspension of all liturgical services until further notice. Nationwide, school shutdowns have upended education for more than 32 million students, and across the globe, 300 million.

"We are in uncharted territory as a University community and as a nation," Norberto Grzywacz, Loyola provost and chief academic officer, said in a March 13 statement. 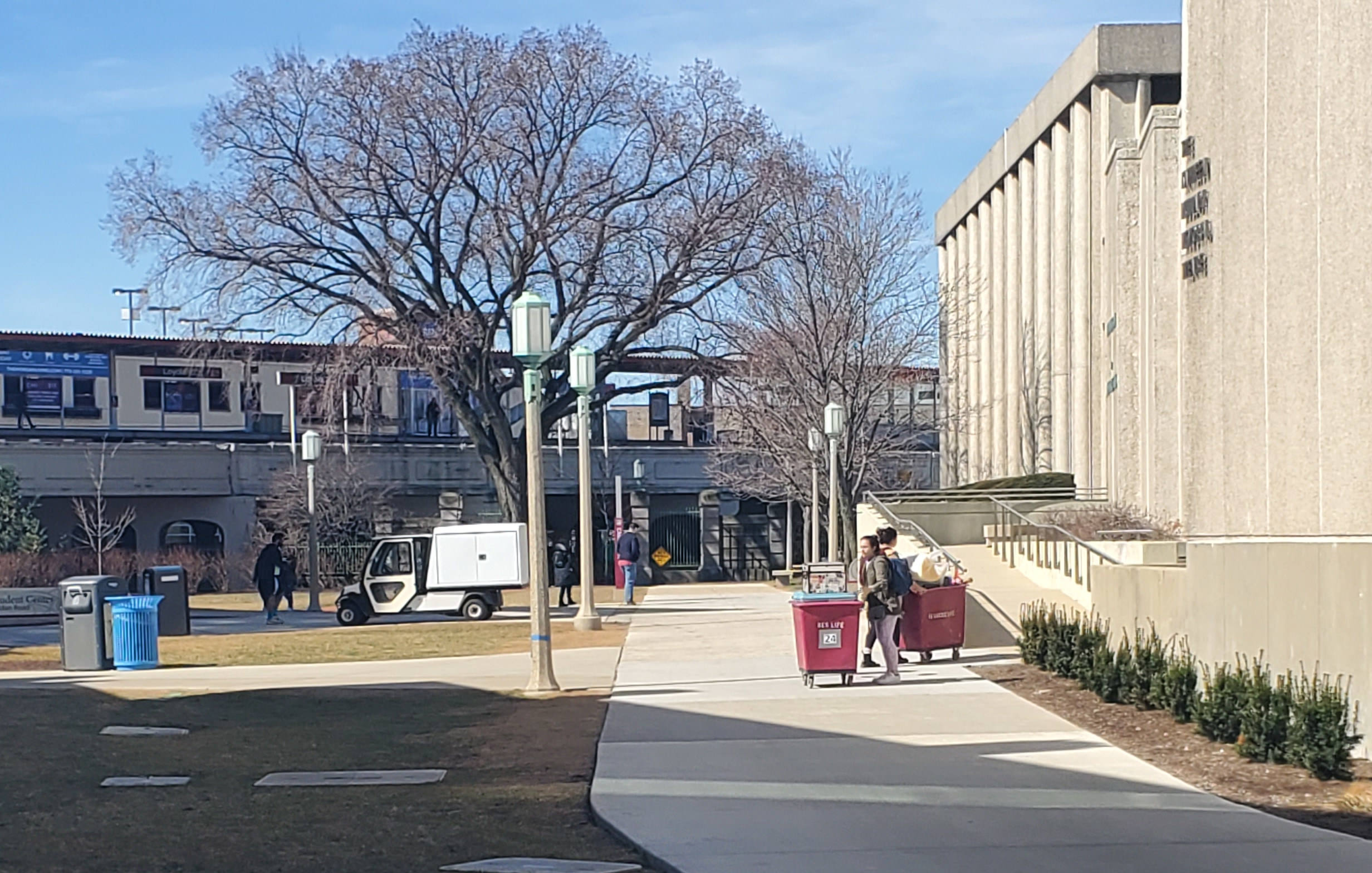 Two students use wheeled bins to move personal belongings on March 13 at Loyola University Chicago. A day earlier, the Jesuit university announced classes would move online for the remainder of the semester and encouraged students to head home in response to the global coronavirus outbreak. (NCR photo/Brian Roewe)

The Institute of Environmental Sustainability plans to reschedule the conference for a later date, possibly in the fall or next March. Tuchman told NCR it would likely retain its same focus on youth climate activism.

Despite the cancellation, the smaller climate workshop was salvaged.

Participants, the majority from Loyola but a handful attending from overseas, discussed the linkage between Jesuit pedagogy and community-based research — a type of applied research that responds directly to the needs and interests of a community, often marginalized groups, and working collaboratively with them to address problems such as food security, water scarcity or the presence of environmental toxins. 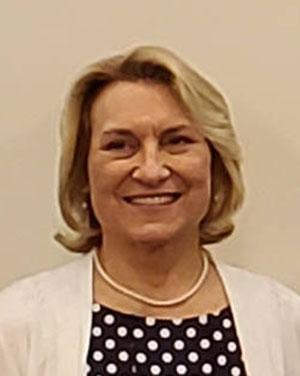 Participants described community-based research as one entry point for Jesuit universities to advance Pope Francis' encyclical "Laudato Si', on Care for Our Common Home" and the Jesuit order's four universal apostolic preferences, one being caring for God's creation. Tuchman, a biologist who studies aquatic ecosystems, called it "a very powerful tool for effecting change" and mission-centric with the Jesuits' work.

"I see the value in community-based research to the whole Society of Jesus and to the whole effort of trying to reach people at the margins. And typically when people are working on social justice issues, there's an environmental component," she told NCR.

Jesuit Fr. Michael Garanzini, secretary for higher education for the Society of Jesus and chancellor and former president of Loyola Chicago, was among those at the workshop. In opening remarks, he said the event illustrated "a really unique and very practical way" to integrate each of the universal priorities into the work done across Jesuit institutions. He likened the approach of applied research to the recent Amazon synod, saying, "It wasn't about creating new ideas. It was about the application of ideas that are already out there."

"When you do community-based research, you are continuing the discernment process and you are walking with those people who are on the margins who really need accompaniment," Garanzini said.

The Loyola Chicago workshop followed a similar conference on environmental justice at Santa Clara University in May. Next year at Boston College, Garanzini will host the International Association of Jesuit Universities’ assembly of presidents of the roughly 200 Jesuit universities worldwide, where it's expected that community-based research as an approach to environmental issues will be among the topics discussed. 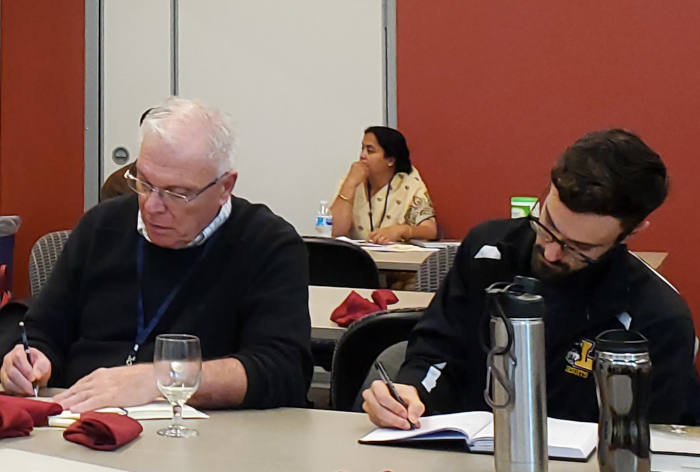 "It's a powerful meeting because all the presidents are there. And they all know they have to do something around ecology," said Tuchman, who co-chairs the association's environmental and economic justice task force.

One of the hurdles to wider acceptance of community-based research, participants said, is the academic structures within the U.S., Canada and Europe, which often place higher value on independent, original research in faculty promotions and tenure decisions. Through increased awareness, resources and development, Tuchman and others hope to demonstrate the value of more applied research, particularly for Jesuit and Catholic schools.

"In Jesuit universities, we always talk about doing our work to serve communities at the margin. But it tends to be that that kind of work comes through our teaching, but then our research is still sort of basic research," Tuchman said.

Case studies at the workshop presented examples of community-based research in action within India, Nicaragua and the Philippines. Representatives from each country led the discussions.

In Nicaragua, farming cooperatives have partnered with Santa Clara researchers to use mapping, data collection and resource management to help address seasonal food and water shortages in the Central American country, exacerbated not only by climate change but other factors like crop and food prices. In the Philippines, Jesuits have worked with indigenous youth in forest management mapping of ancestral lands in the Mindanao region, to see how deforestation, largely driven by corn production, impacts resources as well as carbon emissions. 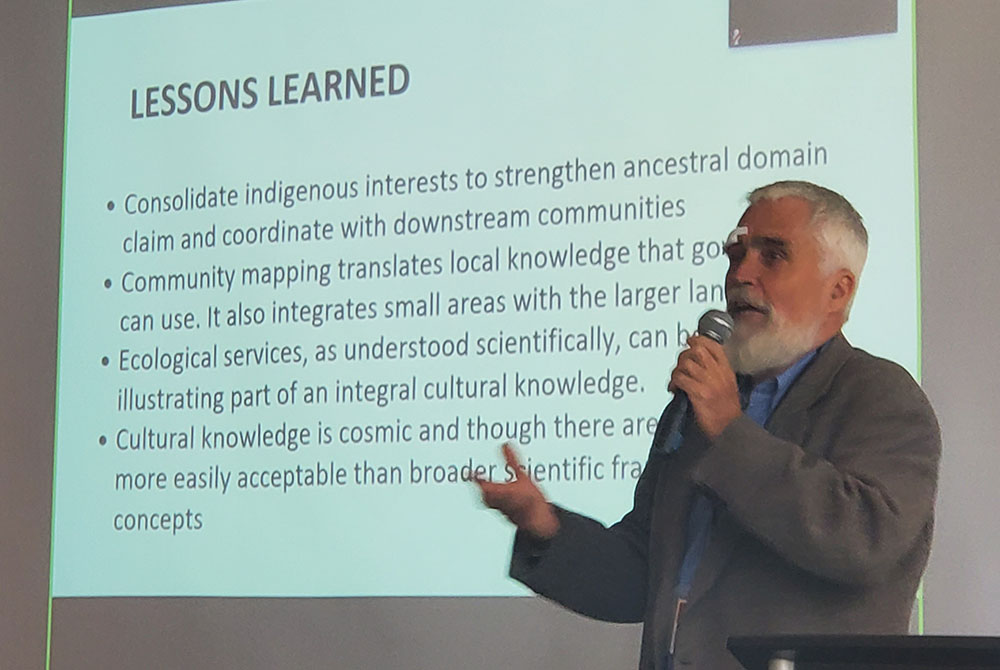 Jesuit Fr. Pedro Walpole discusses the results of work on forest management with indigenous communities in the Mindanao region of the Philippines during a climate workshop at Loyola University Chicago March 12. (NCR photo/Brian Roewe)

A third case study highlighted watershed development in India involving the Jesuit-founded Social Centre, in Ahmednagar in India's western Maharashtra state. Jesuit Fr. Siju Varghese and Supriya D'Souza, director of the Xavier Institute of Natural Resource Management, described how the center, founded in 1966, works with local communities, the government and other partnering organizations in sustainable development through natural resource conservation.

In the case of the Kaknewadi Village, an eight-year project transformed a brown and barren land into lush green with significantly higher land fertility, forest coverage and organic farming. The stark ecological makeover altered people as well as the land, as fewer left the village in search of work, children could attend school daily and women took on leadership roles and received equal pay.

An essential part of any community-based research project, Varghese and D'Souza stressed, is that the local community must be involved and participating from the beginning.

Reflecting on the daylong workshop, Jesuit Br. Mark Mackey said he found the case studies particularly informative and relevant, as he hopes to be conducting his own community-based research later this year.

In the final stages of completing his first studies as a Jesuit in Christian spirituality and eco-spirituality, the young Jesuit with a background in environmental science said that to him community-based research embodies ideas Francis presented in Laudato Si', especially how nature and human communities deteriorate together.

Later this summer, Mackey will head to northeast India where he plans to study how an indigenous community has lived for generations on their land without spoiling it. As he put it, "Seeing people who are exemplars of that living in right relationship with the land that Pope Francis urges us toward."

That is, he added, as long as the coronavirus doesn't cancel his own travel plans.