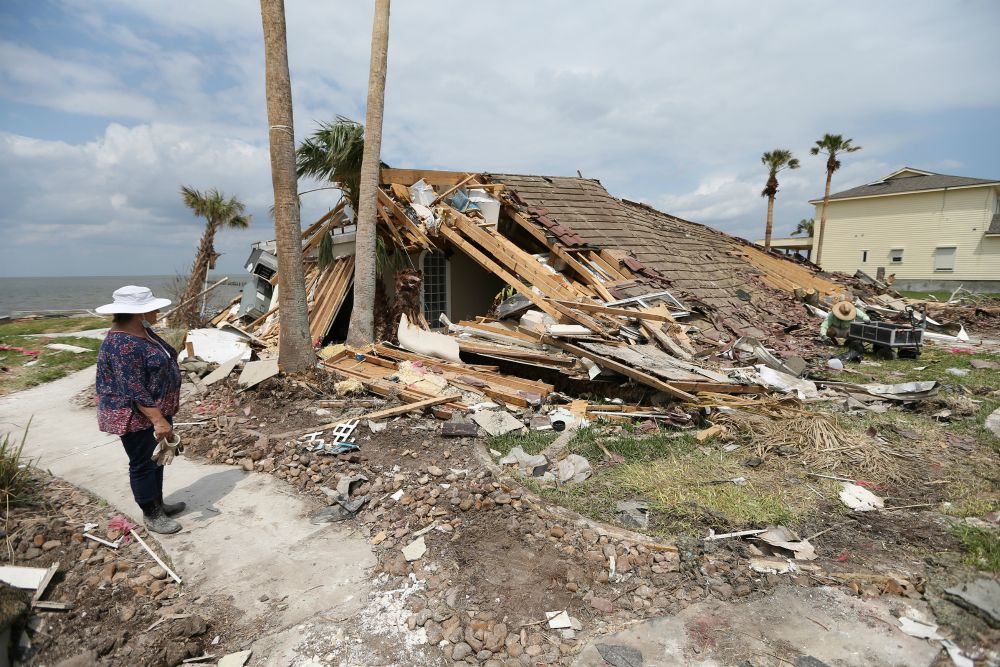 Liz Vestal looks at her destroyed home in Rockport, Texas, Sept. 8, in the aftermath of Hurricane Harvey. Vestal and her husband are parishioners of St. Peter Church, which also was destroyed in the hurricane. (CNS/Bob Roller)

The people of Puerto Rico are still in "a state of emergency" after Hurricane Maria, while some residents of the U.S. Virgin Islands are showing signs of post-traumatic stress after living through two storms this late summer and fall. Meanwhile, Texans affected by Hurricane Harvey are worried that their longer-term needs will be forgotten when the world "goes onto the next story."

These were the updates from three bishops from hurricane-ravaged dioceses, who nonetheless thanked generous Catholics and donors for their assistance after the storms. The bishops spoke at a press event Nov. 14 sponsored by Catholic Extension, which has already donated $365,000 to dioceses that have been affected.

Earlier, at the U.S. bishops' meeting, Catholic Charities USA announced that it had collected $24 million for disaster relief for Texas, Florida, Puerto Rico and the Virgin Islands — all of which will be delivered to those areas affected by storm damage, according to Dominican Sr. Donna Markham, Charities' president and CEO.

Whole neighborhoods are sharing a gas stove, and the only dialysis center in San Juan still standing is working around the clock but still unable to see all patients, González Nieves said.

"During the first two to three weeks, we couldn't communicate," he said. At night, "it is so pitch dark, there's a feeling of aloneness [that is] overwhelming. That can translate to a sense of abandonment."

Yet violence has been minimal, he said, and families are pulling together. The archbishop has even seen an increase in church attendance since the storm.

"Moments like this bring out the best in the human person," he said.

Bishop Herbert Bevard of St. Thomas also has witnessed a resilience and solidarity among the people of his diocese after Hurricanes Irma and Maria. For example, the three Catholic schools on St. Croix and one on St. Thomas opened quickly after Maria and welcomed other students, regardless of ability to pay.

People in the Virgin Islands lost not only their homes, but also their source of income in the tourist industry, which isn't expected to recover for a while, the bishop said. "The impact is traumatic and very discouraging for many people," he said.

He called his priests "heroes" for easing the spiritual, emotional and physical suffering of their people under "very difficult and trying situations." Some are camping out after rectories were destroyed, lost roofs or became infested with mold.

After Hurricane Harvey, parishes, schools and a retreat center flooded in the Diocese of Beaumont, Texas, in some places taking in as much as 64 inches of water, said Bishop Curtis Guillory of Beaumont; he has lived through six major hurricanes in his lifetime.

"For the diocese, as for so many people, it's going to be a long, costly journey to restore and repair," he said.

Still, Guillory was inspired by people of different backgrounds coming together to help one another in the aftermath of the storm. "Unfortunately, often it takes a tragedy to bring out our common humanity," he said.

Catholic Extension also announced a multiyear fund-raising effort to further assist the hurricane-affected dioceses and pledged to continue advocacy, even after the story fades from the news. The organization's vice president of mission, Joe Boland, promised continued prayers and financial support, adding that the three bishops represent "the best of the Catholic Church in the worst of times."