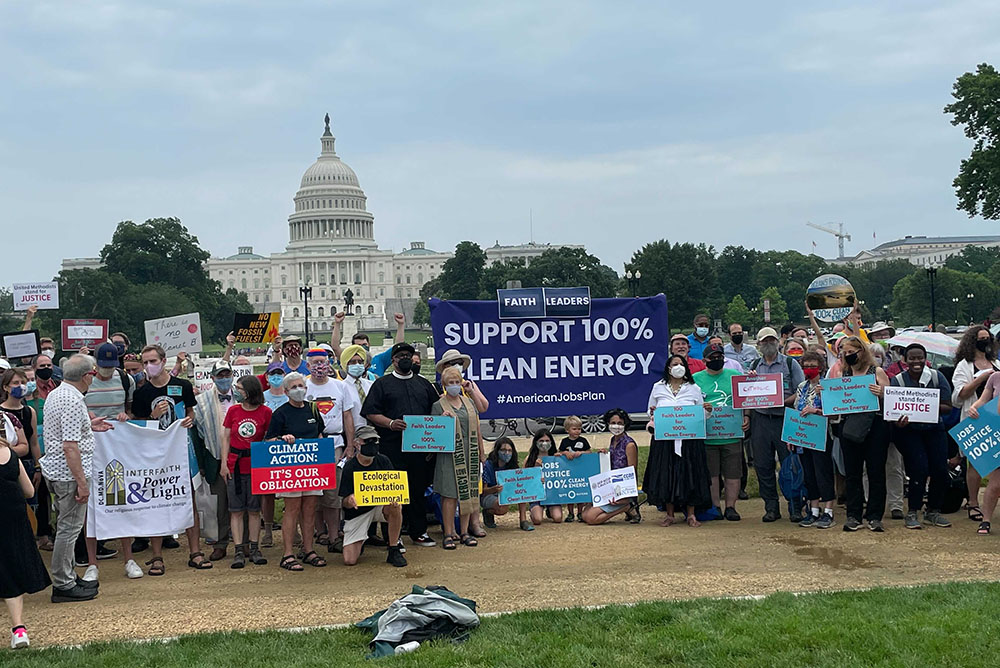 That was the goal of organizers of a June 9 rally in Washington, D.C., to gather 100 pastors, rabbis and other religious leaders to vocalize their support for President Joe Biden's American Jobs Plan and its promise to establish a 100% clean energy standard by 2035.

"This is the moment for our nation and our collective future. We can transform our society and economy," said Rabbi Jennie Rosenn, founder and CEO of Dayenu, a Jewish climate action group. "But in order to do so, our policymakers need to have vision and courage to pass economic recovery and infrastructure legislation at the scale that justice and science demand."

'We can no longer afford to live according to the status quo. We've got to have systems change.'

The faith event, staged on the National Mall in the foreground of the U.S. Capitol, was the start of an escalated push by environmental groups to press members of Congress to support Biden's ambitious infrastructure plan and a clean electricity standard at a moment they see as critical for the legislative futures of both.

The American Jobs Plan is a cornerstone of the Biden administration's pledge to halve the nation's greenhouse gas emissions by 2030 and reach net-zero emissions by midcentury. The plan proposes spending upward of $2 trillion and creating millions of jobs this decade to repair the nation's roads and bridges, retrofit homes and buildings for energy efficiency, and shift the nation's economy away from fossil fuels to a clean energy future.

The Rev. Susan Hendershot, president of Interfaith Power & Light, said her group's support of the American Jobs Plan is about love for neighbor and the Earth, and justice for communities harmed by burning fossil fuels. 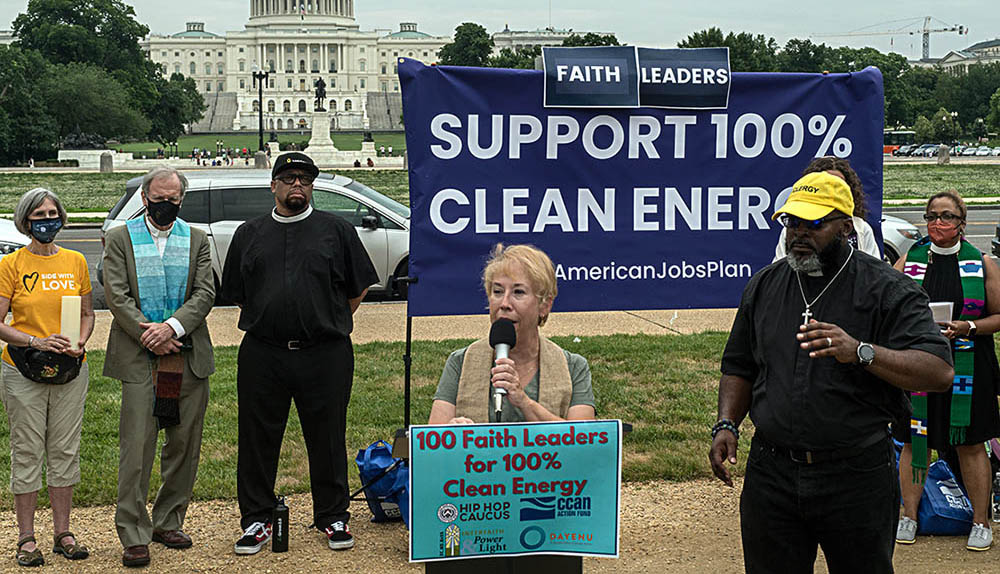 Along with Interfaith Power & Light, the campaign, called "100 Leaders for 100% Clean Energy," was co-organized by Dayenu, the Hip Hop Caucus and Chesapeake Climate Action Network Action Fund, which advocates for solutions to address global warming's impacts on the Chesapeake Bay region.

"The American Jobs Plan is a great policy. And in an era of rapid climate change, it is a moral document," said Mike Tidwell, director of Chesapeake Climate Action Network and a Sunday school teacher at his Presbyterian church in Takoma Park, Maryland.

The Rev. Michael Malcom, director of Alabama Interfaith Power & Light, told EarthBeat that it was important for religious leaders to support a clean energy standard, which would decarbonize the nation's electricity grid. Not only would such a measure slash greenhouse gas emissions in the country with the highest historical emissions rate, but he said it also would help reduce energy costs for those who can least afford them, including renters, many of whom are people of color.

Besides championing key components of the American Jobs Plan, faith leaders also challenged Biden to keep other core climate initiatives in the plan as it moves through Congress and as he continues to seek bipartisan support. Among them: establishment of a Civilian Climate Corps, investments in home weatherization, creation of jobs to restore abandoned mines and plug oil and gas wells, and ensuring that 40% of spending and benefits go to historically disadvantaged communities.

Republicans have so far resisted the president's infrastructure blueprint, which they say goes beyond traditional projects, and his plan to pay for it by raising corporate taxes. Senate Republicans' last counterproposal offered $928 billion, with roughly $330 billion in new spending, and the bulk of the costs paid by consumers through gas taxes and highway tolls.

A day before the faith event, Biden cut off talks with Sen. Shelley Moore Capito of West Virginia, the Senate Republicans' lead negotiator. The president is expected to focus instead on a bipartisan group of moderate senators, while Senate Democrats prepare for the possibility of passing legislation through a budget reconciliation procedure that would require a simple majority, rather than 60 votes.

But the pursuit of a bipartisan deal has some progressive environmental groups worried that negotiations could end with climate provisions being scaled back or removed altogether from any legislation. During negotiations with Republicans, Biden at one point proposed cutting spending by $1 trillion.

In early June, members of the youth-led Sunrise Movement staged their own demonstration outside the White House to demand that Biden not compromise on his infrastructure plan and that he push the full plan through Congress, including funding for a Civilian Climate Corps. They also asked the president to meet with youth organizers. Sunrise plans a larger protest on June 28.

"Biden will either pass a historic infrastructure package with climate at its core, or he will have to look us in the eyes and tell us why he failed to do everything possible to stop the climate crisis while he had the power to do so," Varshini Prakash, Sunrise executive director, said in a statement.

'This moment offers a once-in-a-generation opportunity to invest in the clean energy future while addressing injustices of the past.'

Along with the event on the National Mall, religious leaders delivered their messages in written form, including an op-ed in The Washington Post.

"As we move from COVID relief to economic recovery, this moment offers a once-in-a-generation opportunity to invest in the clean energy future while addressing the injustices of the past," the letter stated.

Another letter, signed by more than 100 pastors, professors and other evangelical leaders, also called for securing climate and environmental provisions in a final infrastructure package.

"Just as God can turn bad into good and bring beauty from ashes, we have the once-in-a-lifetime opportunity to create a brighter, healthier, and more just future out of the ashes of the COVID-19 crisis. How we choose to rebuild today will shape the lives of generations to come," the letter said.

The Rev. Kyle Meyaard-Schaap, vice president of the Evangelical Environmental Network, which organized the letter, said in a statement that there is a misconception that evangelicals deny that climate change is occurring and oppose environmental policies, "but that's simply not true."

"Just like everyone else, we care about our kids' health. We want them to have clean air to breathe and pure water to drink. Our neighbors need jobs that will provide for their families," he said. "What's more, Scripture teaches us that we have the moral responsibility to care for God's world and to defend the vulnerable."

Several religious leaders at the D.C. event arrived after spending several days in northern Minnesota, where hundreds of people of faith joined with thousands of Indigenous and environmental activists in a series of prayer ceremonies and demonstrations opposing the Enbridge Line 3 tar sands pipeline.

Called the Treaty People Gathering, the multiday mobilization, the latest in a series of protests in recent months, saw several actions to shut down construction of the pipeline, including road blockades and protesters chaining themselves to construction equipment. More than 200 people were arrested.

Many opponents of Line 3 want Biden to cancel it, as he did the Keystone XL transnational pipeline on his first day in office. On June 9, TC Corporation, the Canadian company developing Keystone, announced it was officially terminating the long-contested project.

Malcom, who attended both gatherings, told EarthBeat the fight against Line 3 and for the American Jobs Plan are one and the same. In both settings, he sees people "standing up and saying they've had enough."

The minister said one of his main messages to the Biden administration was that the country can no longer keep fossil fuels in its energy mix, along with renewables, "because an all-of-the-above approach harms communities." One role for religious communities, he added, is to make sure those most impacted by decisions are not left out of discussions.

"We can no longer afford to live according to the status quo. We've got to have systems change. This particular bill offers a systems change," Malcom said. "We're ambassadors for it. We want to make sure it happens."

A version of this story appeared in the June 25-July 8 print issue under the headline: 102 faith leaders rally for 100% clean energy.