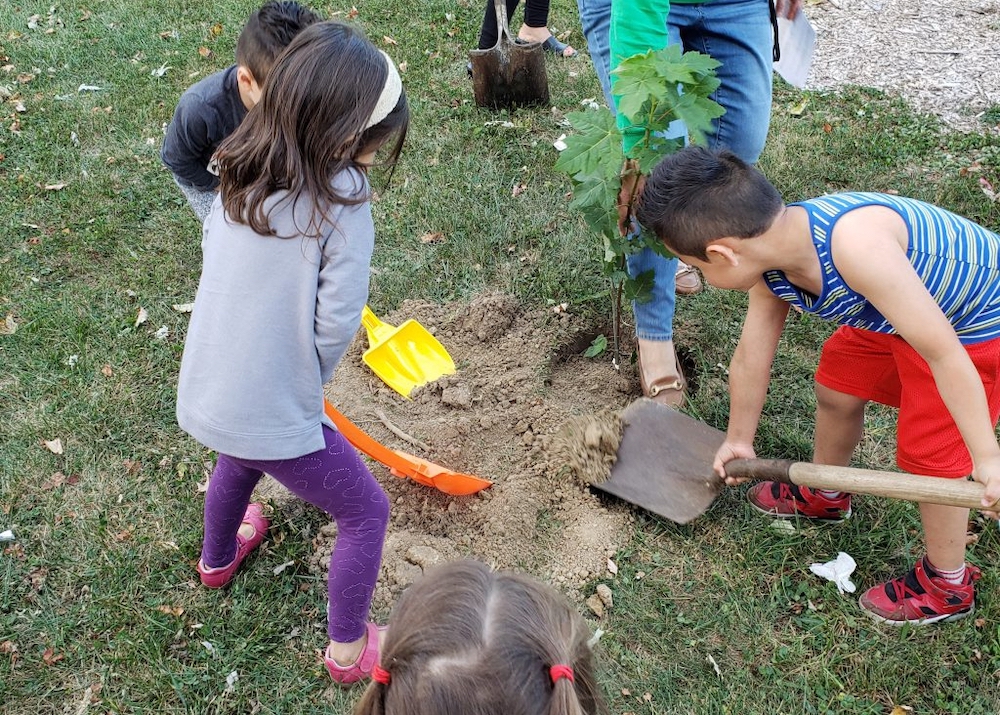 Children plant trees on the feast of St. Francis in October 2019 in Indianapolis. Laudato Si' Week 2021 is May 16-25. (CNS/Courtesy of Indianapolis Archdiocese's Creation Care Commission)

The Vatican's celebratory year for Pope Francis' encyclical on ecology is coming to a close, but organizers hope its end will mark the beginning of a major movement within the global Catholic Church to turn its message about preserving creation into actions to create a more sustainable world for all.

In May 2020, the Dicastery for Promoting Integral Human Development declared a Special Laudato Si' Anniversary Year to mark the fifth anniversary of Francis' 2015 encyclical "Laudato Si', on Care for Our Common Home." Bookending the year have been two Laudato Si' Weeks, sponsored by the dicastery and other Catholic organizations.

Laudato Si' Week 2021 begins May 16 and runs until May 25. The time frame coincides with the date, May 24, 2015, when Francis signed his first solo encyclical and the first-ever papal document centered on the environment.

This year's Laudato Si' Week pulls its theme from part of the pope's appeal in the document's introduction: "For we know that things can change." The events will celebrate the church's progress so far in acting on the landmark encyclical, with the goal of launching a massive multiplication of Catholic engagement around conservation, sustainability and changing the current trajectory of global warming.

Christina Leaño, associate director of the Global Catholic Climate Movement, one of the partner organizations, said the theme is both an acknowledgement of environmental work undertaken by Catholics already and an invitation to advance those efforts even further.

"We've seen the tremendous initiatives, all the work that Catholic institutions have done around the globe, and individuals, because of Laudato Si'," she said.

Salesian Fr. Joshtrom Kureethadam, coordinator of the dicastery's ecology and creation sector who's been at the center of planning the Laudato Si' Year, told EarthBeat that the year has unfolded "even beyond our expectations."

He highlighted numerous projects, among them a major tree-planting initiative in Bangladesh, the creation of Laudato Si' Gardens, countless webinars and a Living Chapel installation in Rome. Religious orders have been among the most active, he said, with his own Salesian province in India committing to solar energy.

"We're very optimistic, because as I said, we are seeing a movement from below, and as Pope Francis often says, from the peripheries," Kureethadam said.

Virtual events will take place each day, including presentations by Cardinals Peter Turkson and Luis Tagle, along with Laudato Si'-inspired concerts and contests. But one of the main events will come on May 25, when the dicastery will hold a "soft launch" of its much-anticipated Laudato Si' Action Platform.

The platform, announced during Laudato Si' Week 2020, will outline a series of benchmarks for Catholic organizations large and small to achieve "total sustainability" in the spirit of the encyclical within a seven-year period. 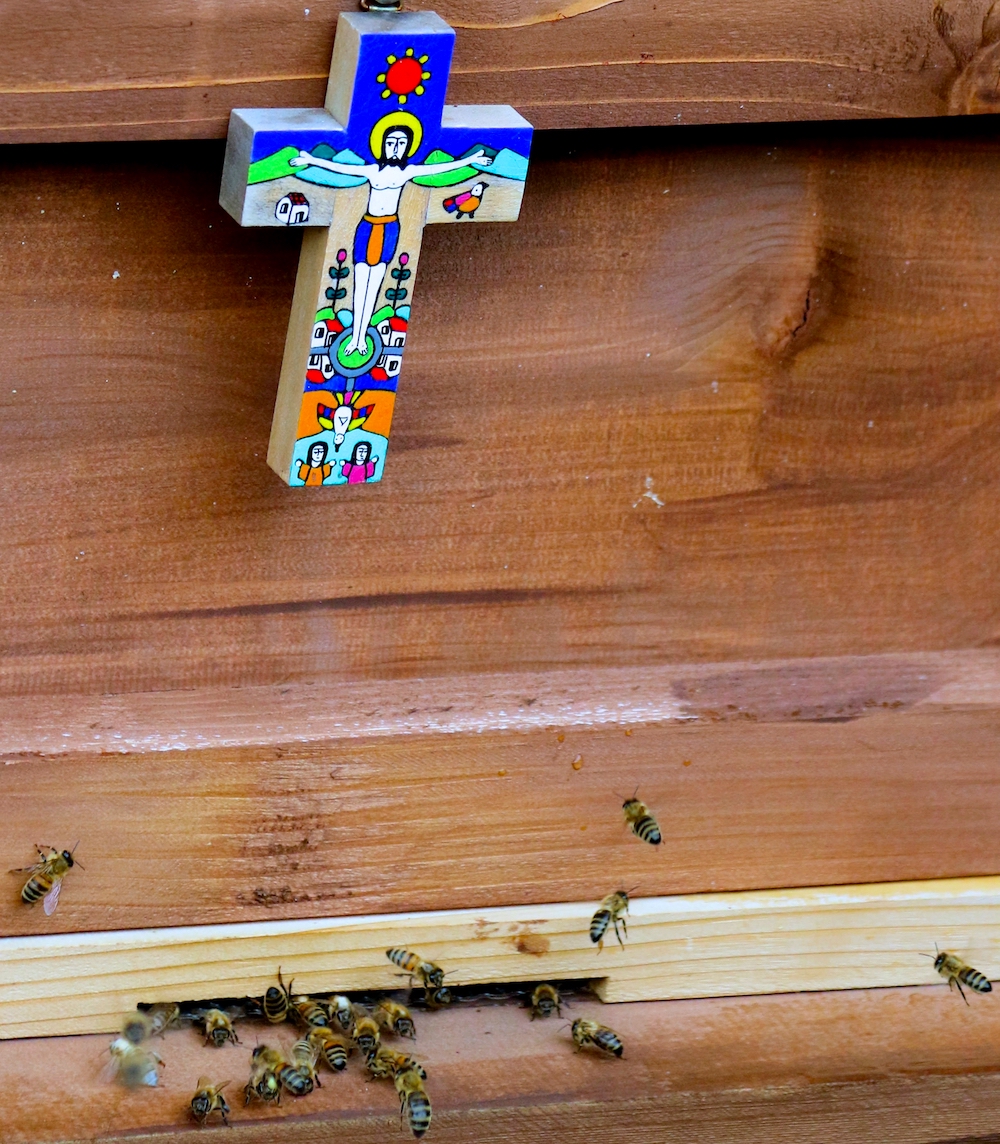 A beehive is seen at the Laudato Si Centre in Manchester, England, Aug. 22, 2019. (CNS/Simon Caldwell)

The ambitious project seeks to animate Catholics at the grassroots — in families, dioceses, religious communities, schools, universities, health care centers and businesses, including farms — to meet seven sets of sustainability benchmarks. Among them: achieving carbon neutrality, reducing plastic use and meat consumption, incorporating ecological themes into liturgies and education, defending all forms of life, divesting from the fossil fuel sector and investing in renewable energy.

Kureethadam said the platform is intended to offer Catholics a strategic way to live out the spirit of integral ecology described in Laudato Si', at a time when the crises of the coronavirus pandemic and climate change have made more and more people recognize a new way of living is necessary for the sake of the world's most vulnerable populations and endangered ecosystems.

"We cannot go on like this, and I think Laudato Si' offers an alternate path," he said.

Catholics engaged in environmental work have eagerly awaited the Vatican-backed platform as a potential game changer that may move more Catholics to seriously address ecological issues. Scientists say this decade is critical for dramatically cutting greenhouse gas emissions to limit the most catastrophic impacts of climate change.

Jose Aguto, associate director of Catholic Climate Covenant and a point person for U.S. preparations for the Laudato Si' Action Platform, described its potential as "transformational."

"It is the proverbial pebble on top of the mountain to get the big old snowball going," he told EarthBeat in January.

"Our hope is that it can be a week that inspires, as we listen to each other and the ways that we've been bringing Laudato Si' to life."
—Christina Leaño, Global Catholic Climate Movement

The Vatican will hold a press conference to announce the soft launch of the platform, which is expected to further preview the initiative, debut a new website and ask Catholics to begin discerning how they might become engaged. More of the Laudato Si' Action Platform will then be rolled out on Oct. 4, the Feast of St. Francis of Assisi, at the conclusion of the annual ecumenical Season of Creation.

Since the release of Laudato Si' in June 2015, Francis has brought the church's moral voice to international talks on climate change, biodiversity loss, deforestation and increasing threats to Indigenous communities and others who are highly vulnerable to the impacts of a warming world.

The pope has called Catholics and others to an "ecological conversion" based on heeding "the cry of the Earth and the cry of the poor." As the coronavirus has surged around the globe, he has urged countries not to return to normal, but to regenerate a world that better conserves its natural resources and cares for the people and creatures living in it.

"Both the global catastrophes, Covid and climate change, prove that we do not have time to wait," Francis said in an Earth Day message. "Time urges us, and as COVID-19 demonstrated, we do have the tools to face the loss. We have the instruments. This is the moment to act. We are at the edge."

Before the Laudato Si' Action Platform launch event, the week will offer a series of webinars featuring several cardinals, numerous development officials and climate activists and artistic presentations highlighting biodiversity threats. The pope may also comment on Laudato Si' Week during his Angelus messages in St. Peter's Square on May 16 and 24. 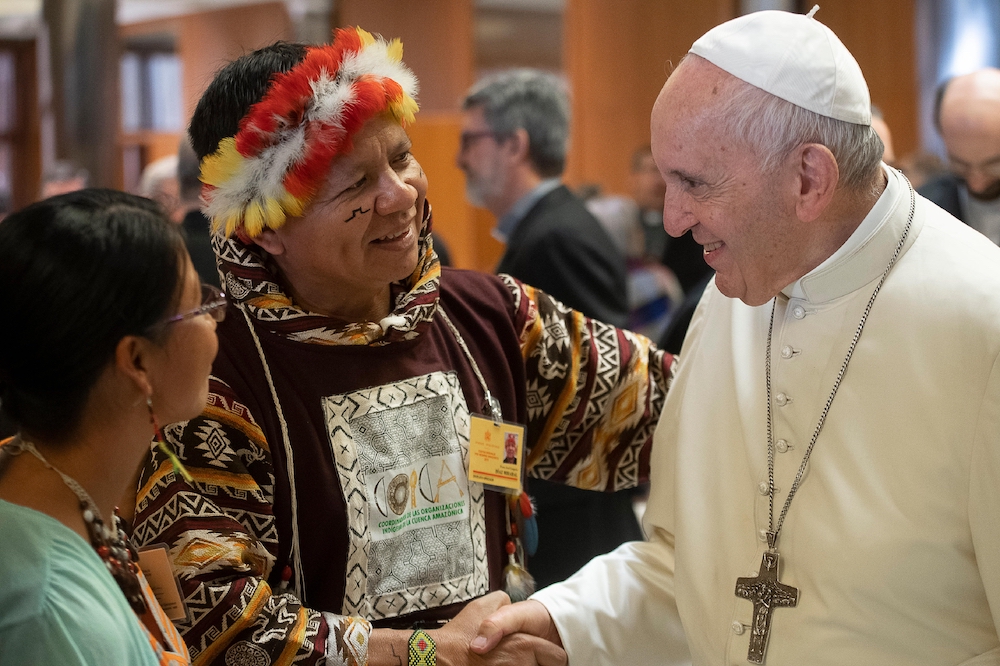 Pope Francis meets Jose Gregorio Diaz Mirabal, a member of the Curripaco indigenous community and COICA, a network of Indigenous organizations in the Amazon Basin, during a session of the Synod of Bishops for the Amazon at the Vatican Oct. 8, 2019. (CNS/Vatican Media)

The first webinar of the week, on May 17, will focus on Catholic participation in two upcoming United Nations summits, COP 15 on biodiversity, held in China in October, and the COP 26 climate conference in Glasgow in November.

That dialogue, which is expected to highlight the church's support of holding global temperature rise to 1.5 degrees Celsius, will include Fr. Augusto Zampini, adjunct secretary of the integral human development dicastery; Christine Allen, director of the U.K.-based development agency CAFOD; José Gregorio Díaz Mirabal of COICA, a network of Indigenous organizations in the Amazon Basin; and Ditebogo Lebea, a youth climate activist from South Africa.

The second session of the week, May 18, will spotlight strides in incorporating the pope's environmental encyclical into education in universities and other settings, and will include a representative of the Laudato Si' Research Institute at Oxford University.

On May 19, a virtual event will turn attention to energy, the health impacts of fossil fuels and the question of divestment. Participants will include Cardinal Jean-Claude Hollerich, president of the Commission of the Bishops' Conferences of the European Union, which announced in November it would avoid fossil fuel investments, and climate activist Bill McKibben, who has led the international Go Fossil Free campaign.

The latest joint divestment announcement by the Global Catholic Climate Movement is also expected during the week.

Religious orders will take the spotlight on May 20, sharing ways they have responded to Laudato Si', including through the Sowing Hope for the Planet initiative led by the International Union of Superiors General. Franciscan Sr. Sheila Kinsey, co-coordinator of UISG's Justice, Peace and Integrity of Creation Commission, will co-lead an international panel of women and men religious.

"Time urges us, and as COVID-19 demonstrated, we do have the tools to face the loss. We have the instruments. This is the moment to act. We are at the edge."
—Pope Francis

The event will also feature the launch of the Creation Care Prayer Network, which will coordinate monthly intentions, retreats and other ways to connect people through prayer for the preservation of creation.

A global day of creation care action on May 21 will be followed the next day by a Laudato Si' Festival featuring "Songs for Creation," where artists and musicians will highlight threats to biodiversity across the globe. Winners of Laudato Si'-inspired photo and story contests will also be honored at the festival, and the Vatican is expected to issue a message for World Biodiversity Day.

Tagle, the Philippine cardinal who heads the Congregation for the Evangelization of Peoples and Caritas Internationalis, will lead a closing prayer gathering on May 23, the feast of Pentecost. The ceremony will begin in Assisi with a message from Archbishop Domenico Sorrentino, and will include a missionary-like send-off of ecological ministers, including the Global Catholic Climate Movement program's Laudato Si' animators, to spread the message of creation care.

On May 24, Turkson, prefect of the integral human development dicastery, will take part in a virtual event on the Vatican's WASH project, which seeks to expand access to drinking water, sanitation and hygiene in Catholic health care facilities around the world.

Leaño said that organizers see the week as a way to energize, educate and ultimately give people direction on specific ways they can take action, whether they be first steps or the next project.

"Our hope is that it can be a week that inspires, as we listen to each other and the ways that we've been bringing Laudato Si' to life," she said. 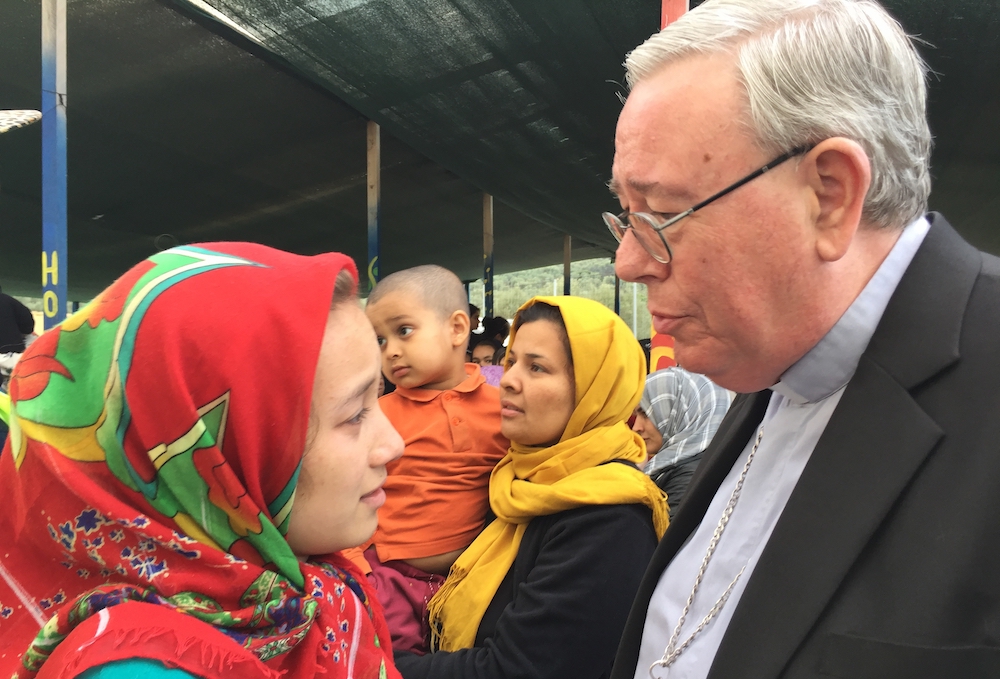 Archbishop Jean-Claude Hollerich of Luxembourg, president of the Commission of the Bishops' Conferences of the European Union, speaks with a refugee at an activity center for migrants and refugees near Moria on the island of Lesbos, Greece, May 8, 2019. (CNS/Cindy Wooden)