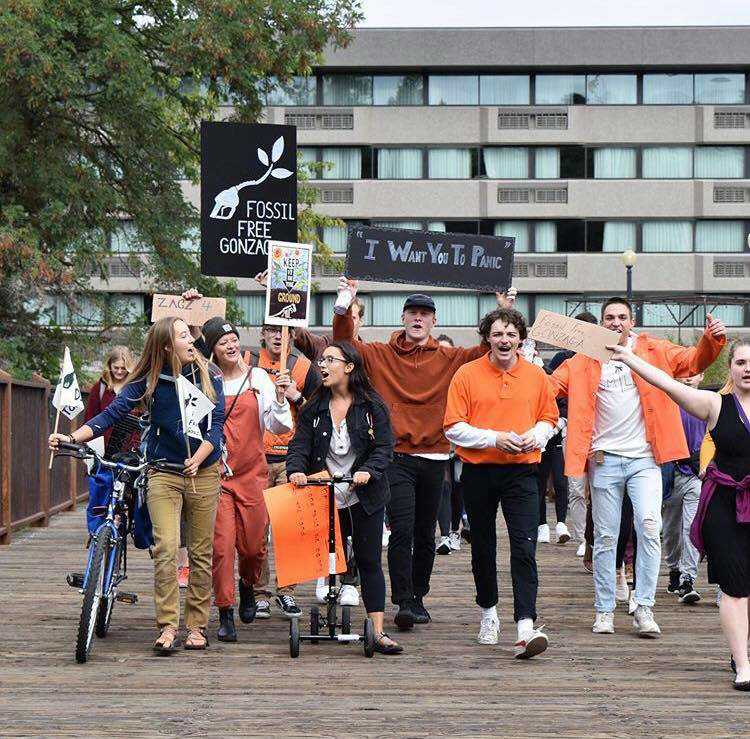 A week after Georgetown University announced plans to fully divest its endowment from fossil fuels, students on other Catholic campuses plan to highlight their example as part of a nationwide day of action against investing in the carbon-emitting energy sources.

On Thursday, students at 57 universities across the country will hold rallies and events to "make our degrees fossil-free" as part of Fossil Fuel Divestment Day. The mobilization is organized by Divest Ed, a branch of the Better Future Project that supports student-led fossil fuel divestment campaigns.

The push to cut financial ties with fossil fuels at academic institutions began in 2012 with the 350.org-sponsored "Do the Math Tour,” which sought to keep the vast majority of fossil fuels in the ground, in line with what scientific studies have stated is necessary to avoid catastrophic climate change. Since then, the movement has expanded beyond campuses and animated more than $14 trillion in divestment pledges from nearly 1,200 organizations worldwide, with educational institutions accounting for 15%.

The Feb. 13 actions come just seven days after the board of directors at Jesuit-founded Georgetown announced it would phase out all investments in fossil fuels from its nearly $2 billion endowment over the next decade. The move came the same day that 90% of voting students supported a referendum endorsing full divestment.

The Georgetown decision, coming eight years after students first launched their campaign, places the Washington, D.C., university among the most prominent U.S. colleges to commit to full fossil fuel divestment.

Aaron Salzman, a senior at Boston College and head organizer of the college-based Catholic Divestment Network, told NCR that the Georgetown decision was "huge" and perhaps represents a turning point for other Catholic schools.

One takeaway for other campaigns was that Georgetown students learned "how to speak the language of finances," he said. Something that other Catholic schools can highlight, he added was the Georgetown administration's reference not just moral but also financial justifications for divestment. Its chief investment officer stated climate change "is increasing the risk of investing in oil and gas companies, as we expect a more volatile range of financial outcomes."

"I think it's a glaring mismatch between different universities' practices if one of the biggest Catholic universities has divested and the others haven't," Salzman said.

He acknowledged Georgetown isn't the first Catholic university to divest — following the University of Dayton and Seattle University — but its reputation as one of the country's most respected schools might better position it to influence other Catholic institutions.

A number of the Catholic campaigns hope to use Fossil Fuel Divestment Day as a way to seize some momentum from Georgetown in their own efforts, as they also look ahead to plans around the 50th anniversary of Earth Day (April 22) and the fifth anniversary of Pope Francis’ encyclical “Laudato Si’, on Care for Our Common Home” in the spring.

Salzman and other Boston College students plan on Thursday to deliver valentines, along with a list of demands, to university president Jesuit Fr. William Leahy and members of the school's administration as part of a "break up with fossil fuels" event.

At Loyola Marymount, in Los Angeles, students plan will host a teach-in on divestment. Elsewhere on the west coast, rallies will be held at Santa Clara and Gonzaga. Members of the newly formed Fossil Free Marquette will use the day to hold an introductory meeting for members.

In Omaha, students at Creighton University produced a video highlighting recent viral comments by CNBC investment analyst Jim Cramer — who said "I'm done with fossil fuels." He singled out worldwide divestment campaigns as his primary reason — along with other dismal economic forecasts for fossil fuels amid concerns about climate change.

Along with the video, the students drafted a letter they planned to deliver to Creighton's president, Fr. Daniel Hendrickson, and its board demanding the university enact a student-passed referendum calling for a two-phase divestment from fossil fuels by April 1. The students also requested the board "seriously consider" divestment at their Feb. 21 meeting, and allow at least two students to address them on the matter.

In making their case for divestment, the students pointed to Georgetown, highlighting both its rationale for divestment as consistent with its Catholic identity and also financially prudent.

"As a Jesuit institution with the same values and obligations as Georgetown, Creighton must now continue to follow – rather than lead – peer universities on divestment," the student letter said.

In November, Creighton president Fr. Daniel Hendrickson declined to act on a student referendum that drew 86% of the vote calling for the university to freeze new investments in fossil fuels. The students also called on the university to divest from the top-200 carbon-emitting companies --  estimated at 2% of its $568 million endowment — by 2025 before reaching full divestment by 2050, the same year the school aims to be carbon neutral.

Discouraged by the university decision, students involved in the divestment campaign plan to shift attention toward making direct appeals to the board of trustees. The students had requested all board members attend a campus forum Jan. 28 on Ignatian responses to the global climate crisis, though only two of its 39 members did so, one them Hendrickson.

The forum was among a series of initiatives Hendrickson announced alongside his decision not to divest. It featured a dozen panelists, consisting of two students involved in environmental groups and 10 professors with backgrounds in economics, renewable energy and business and environmental ethics.

A university spokeswoman said she could offer no immediate comment on the forum, the impact of the Georgetown decision or future investment-related plans previously outlined by Hendrickson, including a review of guidelines and board consideration of renewable investments.

Later this spring, the Creighton Global Initiative will hold a planetary lecture series that will discuss the Green New Deal and climate denial. Last year, the campus co-hosted with Catholic Climate Covenant the first gathering aimed at implementing Laudato Si' more deeply in the U.S. church.

Salzman, who attended the Laudato Si' Conference, told NCR that the encyclical, while helpful in making a moral argument for divestment, hasn't helped much in convincing university administrations and boards to divest.

"I think it's become pretty clear that making moral arguments isn't going to do much, and at the end of the day it'll come down to dollars and cents," Salzman said.