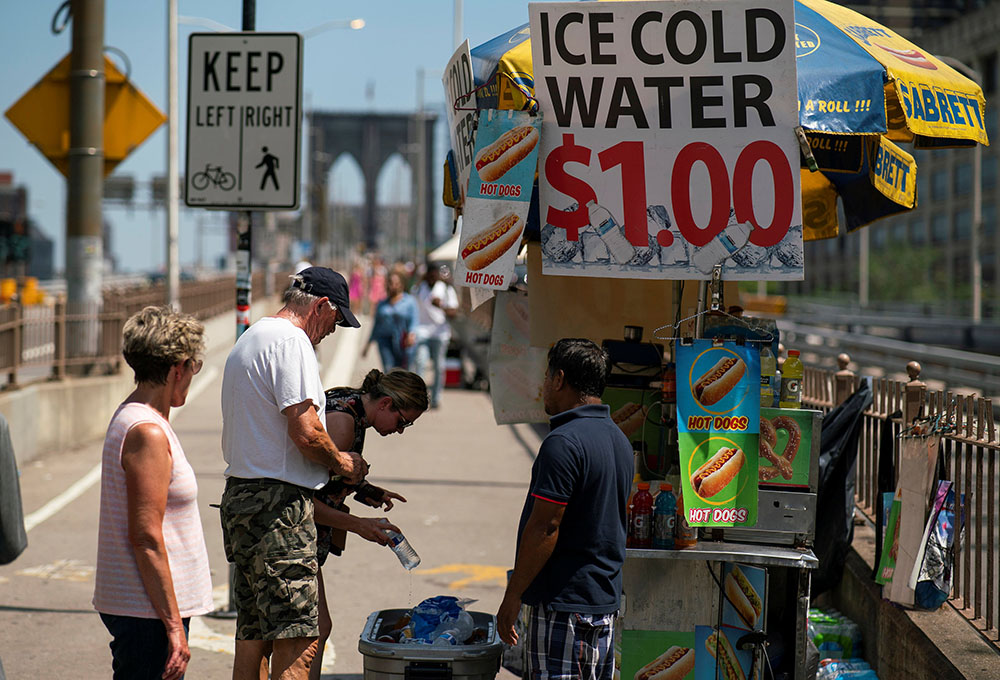 It's been a hot summer in Kansas City.

This week, the Midwest city is set to face its second heat wave of the year after going two years without a period of three consecutive days above 95 degrees. Not that Kansas City has been sweltering alone.

Across North America, the summer of 2021 has seen heat domes and heat waves send temperatures soaring in many regions. It began with triple digits hitting the Pacific Northwest in late June and has continued since, with dual heat waves roasting both coasts earlier this month.

The extreme heat is felt especially in cities, where asphalt and concrete combine to create an "urban heat island" effect that cranks up temperatures even more. It makes programs like the Bishop Sullivan Center's Project ElderCool, which provides air-conditioning units to elderly people living below the poverty line, all the more critical — and potentially lifesaving.

"Thank you, thank you, thank you. I was just diagnosed with first degree heart failure and Parkinson's. This air-conditioner will help me not only be comfortable but extend my life," one recipient wrote in a message to the center.

Within cities, heat waves are rarely experienced equally, with temperatures in some areas varying by double digits between neighborhoods. That disparity often highlights historical inequities in how cities were planned and built, and exposes a key environmental justice question as cities look to turn down the heat, through approaches like replacing blacktops with green space, as climate change drives temperatures even higher. 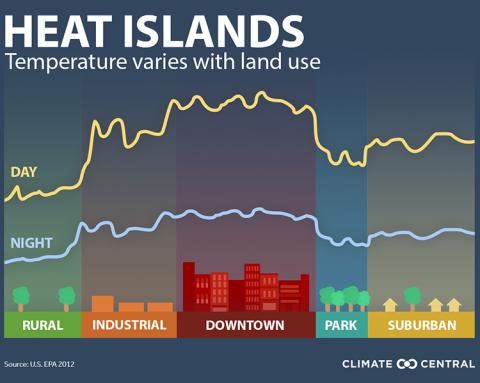 "The question is who gets the trees?" said Eric Strauss, executive director of the Center for Urban Resilience at Loyola Marymount University in Los Angeles.

"In urban areas, trees just don't happen," he said. "They have to be planted and be planned."

The heat island effect results when urban areas experience much higher temperatures than the surrounding suburban and rural settings. Where trees and bodies of water absorb heat from the atmosphere, miles of paved roads and rows of skyscrapers and dense cityscapes retain and radiate it, thereby driving up temperatures, especially at night.

As temperatures rise, so does the use of air conditioning, which leads to more energy derived from power plants that are often run by burning fossil fuels, which contributes to global warming. The increased heat, along with poorer air quality, poses numerous health issues, especially among the elderly, children and communities of color.

Excessive heat can strain the human body's ability to cool itself, notably through sweating, and can push the heart and other organs to work harder. Extreme heat is responsible for more deaths in the U.S. than any other weather-related cause, and more than flooding and hurricanes combined on average over the last three decades.

Back in June, the Pacific Northwest, typically a cool climate region, saw temperatures boil above 100 degrees Fahrenheit for a week, with 175 record highs set across four states. Nearly 600 deaths in Vancouver, the coastal city in Canada's British Colombia province, were connected to the extreme heat.

An analysis of that heat wave by the World Weather Attribution group concluded it would have been "virtually impossible" without climate change. While the urban heat island effect is not directly caused by climate change, rising temperatures are expected to intensify it. 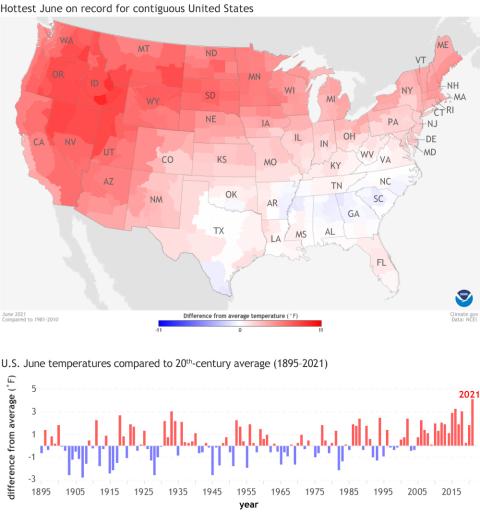 A July report from the independent research organization Climate Central ranked the most intense urban heat islands in U.S. cities. The list was led by New Orleans, and was followed by Newark, New Jersey; New York City; Houston; and San Francisco. But smaller cities, like Burlington, Vermont; Erie, Pennsylvania; and Bend, Oregon, also made the top 20.

In 2017, the U.S. National Oceanic and Atmospheric Administration's climate program office began a citizen science campaign to map inequities in how extreme heat is experienced in cities. Hunter Jones, NOAA's project manager for the urban heat island research, said communities are eager to address heat disparities and to obtain more data to better understand the problem.

"If you want to build an equitable climate resilience plan, understanding how the impact, how the exposure to that hazard changes neighborhood by neighborhood is very important," Jones told EarthBeat.

There are numerous variables that affect how heat is felt in different parts of a city. The amount of green space versus paved surfaces, what building materials are used, how tall and dense buildings are and how a neighborhood is constructed all play a role in how much heat is retained, Jones said. In some cases, temperatures have varied by as much as 20 F from one neighborhood to another.

The inequity of urban heat

Kansas City was one of more than a dozen metropolitan areas in 11 states that have participated in the heat-mapping campaign this year. On Aug. 6, a team of 50 volunteers, led by Fengpeng Sun, a climate scientist at the University of Missouri-Kansas City, attached sensors to their vehicles and drove designated routes through 10 areas of the city at three different times of day early morning, mid-afternoon and early evening. 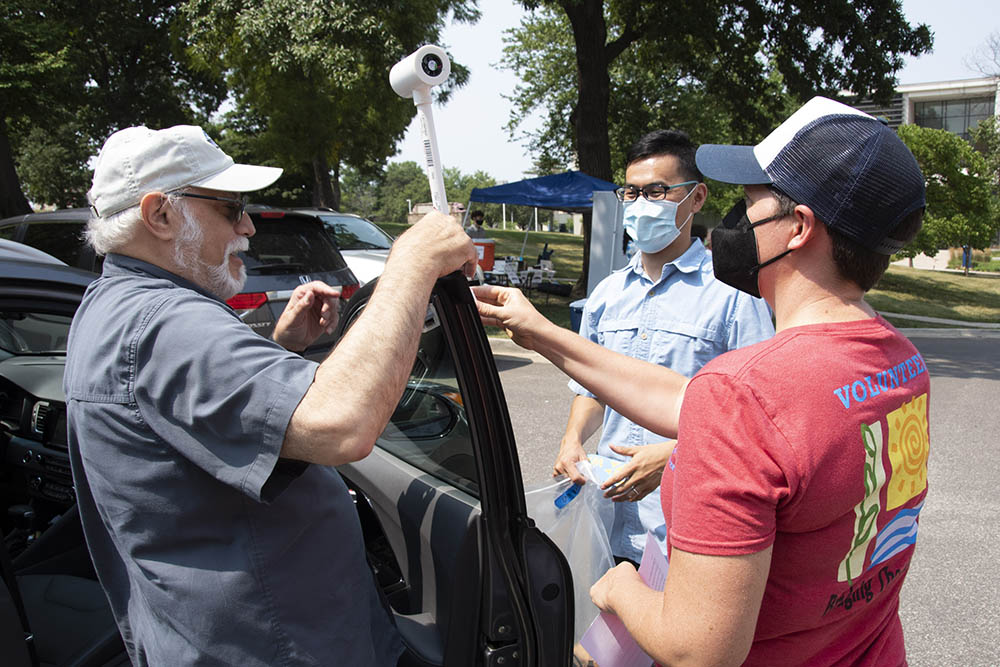 Fengpeng Sun, center, a climate scientist at the University of Missouri-Kansas City, assists volunteers as they secure a heat-monitoring sensor to their vehicle Aug. 6 as part of a campaign by the National Oceanic and Atmospheric Administration to map disparities in heat in different parts of cities. (Courtesy of UMKC)

Sun said he expects results from the data analysis in a couple of months. Meanwhile, the project is already helping to educate more residents about urban heat islands and also what climate change can mean in their neighborhoods.

"Most people think about climate change happening in the mountain glaciers, in the Arctic, so far away from us," he said. "However, we want people to be aware of the fact that climate change is happening anywhere. It can happen in your backyard, in the KC metro area, so this is a whole new thing that we need to prepare for." 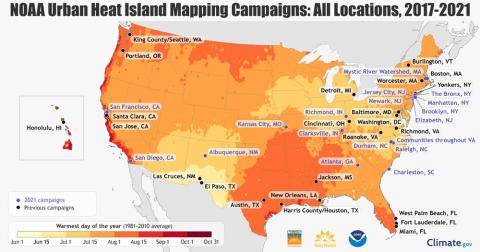 So far, more than 40 cities and communities have been part of the NOAA heat mapping campaign. Data from some are available online. As more participate, NOAA will look for patterns in the data to determine which areas are prone to have the most heat.

A study published in January 2020 in the journal Climate looked at the relationship between urban heat and "redlining," the historical bank lending and housing practices that discriminated against people of color. In 94% of the 108 U.S. urban areas the researchers studied, land surface temperatures were consistently higher in historically redlined communities, which were on average about 4.7 F warmer than non-redlined areas and as much as 12.6 F warmer. The heat divide was starkest in the Southeast and the West.

The legacy of redlining policies goes beyond determining who can live where, Strauss said. Often, it factored into land-use regulations and whether investment is made in amenities like trees and parks.

"These are compounding factors," he said.

Trees are one of the primary buffers against urban heat, Strauss said, because of their ability to both block and absorb heat. They also remove pollutants and absorb some of the greenhouse gas emissions that drive climate change.

Studies have also connected green spaces with other social benefits, like reductions in crime and violence, as well as decreases in respiratory illnesses and obesity.

Two years ago, Loyola Marymount's Center for Urban Resilience mapped the distribution of trees in Los Angeles County, home to 10 million people. It found that roughly 20% of the county had tree cover, but it wasn't distributed evenly. Some areas had as much as 80% tree cover, while others had as little as 1%.

Strauss said that in Los Angeles, city planners, landscape architects and real estate organizations are increasingly paying attention to the urban heat effect. The city is adding biodiversity and green space factors to its permitting process, and organizations like TreePeople have long advocated for more trees in the City of Angels. 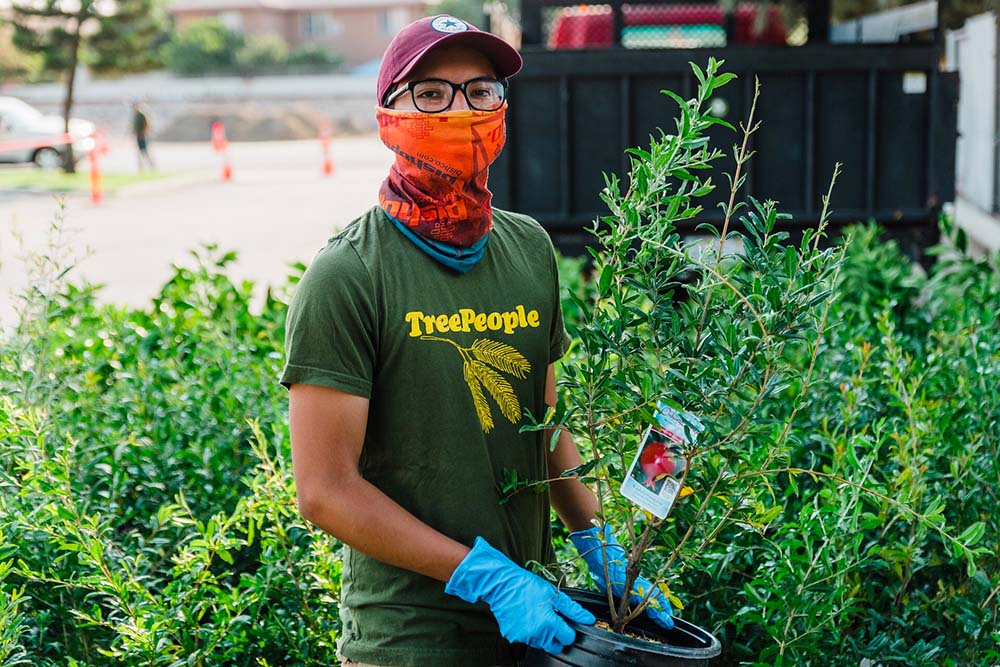 The organization TreePeople announced it distributed free fruit trees on Aug. 14 to 250 households in Huntington Park, which TreePeople said suffers from some of the worst pollution, lowest shade coverage, and some of the most limited access to healthy food in Los Angeles County. (Courtesy of TreePeople)

Across the country, communities are finding ways to help residents cope with the heat.

The Bishop Sullivan Center in Kansas City has operated Project ElderCool since 2000, a year after 21 senior citizens died from extreme heat. In the time since, the center has provided more than 5,600 air conditioners for free to those in need.

"The idea was to give them at least one room of refuge in their home," said Tom Turner, the center's director.

This summer, suppliers urged them to place orders early, because inventories were being redirected to help cool the blazing Pacific Northwest — a sign of the "chain reaction," Turner said, in which extreme heat in one part of the country can have an impact in another. 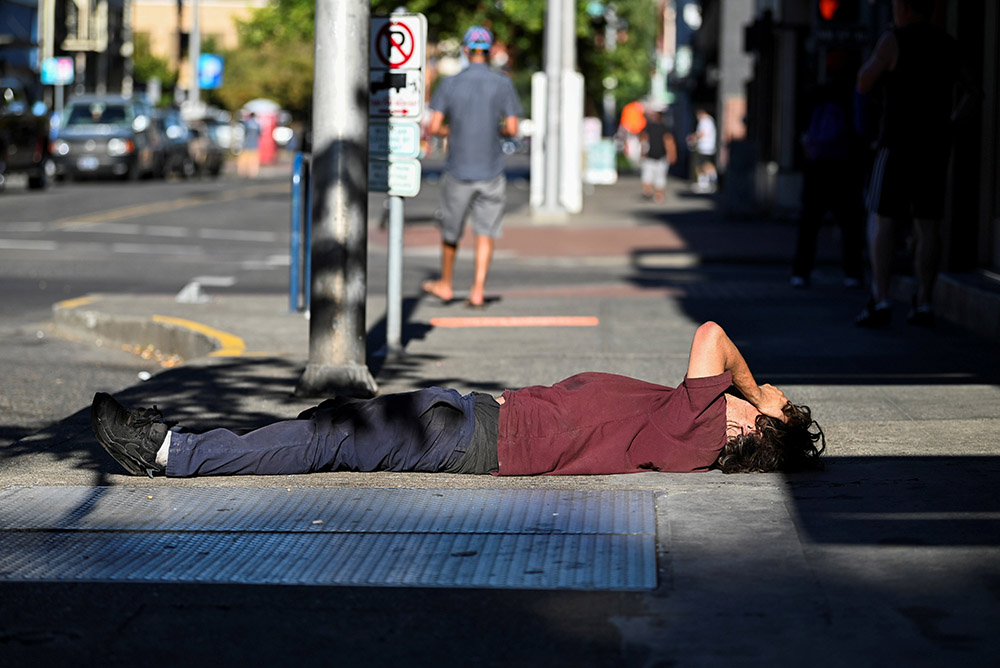 A man in Portland, Oregon, lies on a sidewalk during a heat wave Aug. 11. (CNS/Reuters/Mathieu Lewis-Rolland)

Around the country, local Catholic Charities, such as those in Trenton, New Jersey, and in San Antonio, also provide air conditioners or fans to those in need. In the Diocese of Joliet, Illinois, just south of Chicago, Catholic Charities has set up two cooling centers to offer residents a respite from the summer heat.

"The hotter it's been, the more clients we have," said Kathleen Langdon, interim executive director of Catholic Charities of the Joliet Diocese.

While such programs help older people and those with limited incomes cope with extreme heat, they don't address the root causes of the heat island effect. Strauss of Loyola Marymount sees a role for faith communities in the solutions, as well, beginning with planting trees.

"Every tree is planted at the local level, which means every parish, every community of faith has the opportunity to make a positive transformation in planting a tree," he said.

Cities have been trying a number of ways to reduce the heat island effect. Along with establishing more green spaces, they have looked to expand cooling surfaces by installing green roofs or by whitewashing roads, roofs and other black asphalt surfaces. 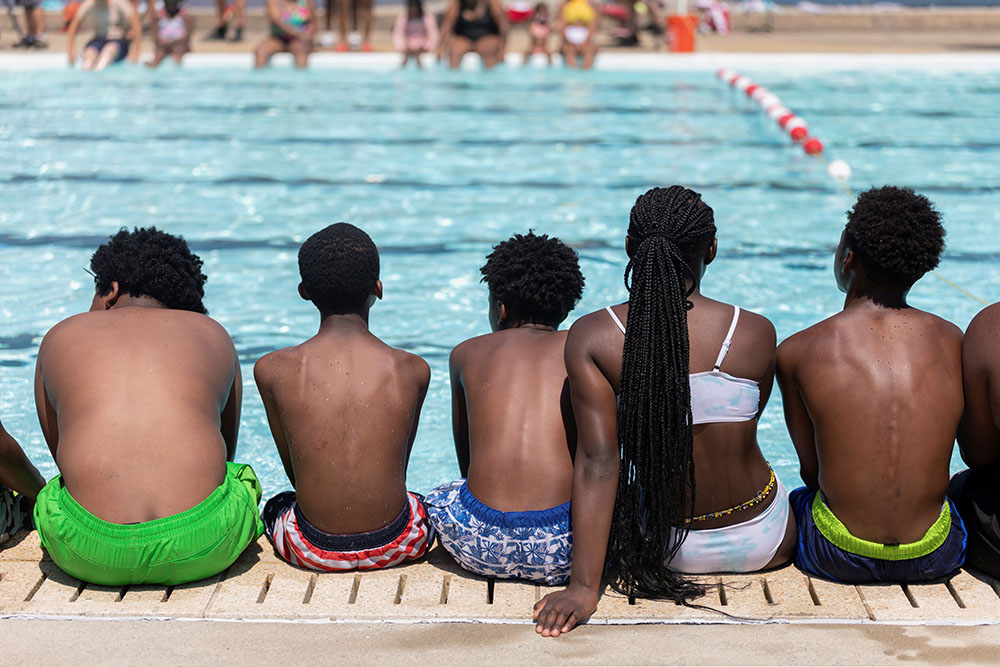 People in Philadelphia wait to swim at the opening of James Finnegan Playground's pool June 30, amid a heat wave. (CNS/Reuters/Hannah Beier)

The city of Philadelphia has seen a decline in heat-related deaths among its most at-risk communities since launching a public awareness campaign and has established cooling centers and "spraygrounds."

Earlier this year, Inside Climate News reported that New York has planted millions of trees as part of its "cool neighborhoods" program, while Phoenix is exploring ways of reducing heat in public housing and cooling street corners and corridors.

Richmond, Virginia, one of the first cities in the NOAA heat-mapping campaign, has used the data to identify spots to increase green space and has pledged that all communities will be within a 10-minute walk of a park. Likewise, Seattle is using its data to identify areas in King County in greatest need of tree canopy and shade and to prioritize permanent protection of urban green space.

The strategies to lessen heat islands and build resilience to warmer summers differ from community to community, Strauss said. But one element central to any plan is "inviting nature back in to be a partner in the solution."

"We have historically treated nature as a swamp to be drained and things to be removed. But our enlightenment over time has led us to understand that managed properly nature is a partner in our health and not an enemy," he said.

Related: As temperatures rise with climate change, how can Houston beat the heat?
A version of this story appeared in the Sept 17-30, 2021 print issue under the headline: City dwellers swelter in heat islands.