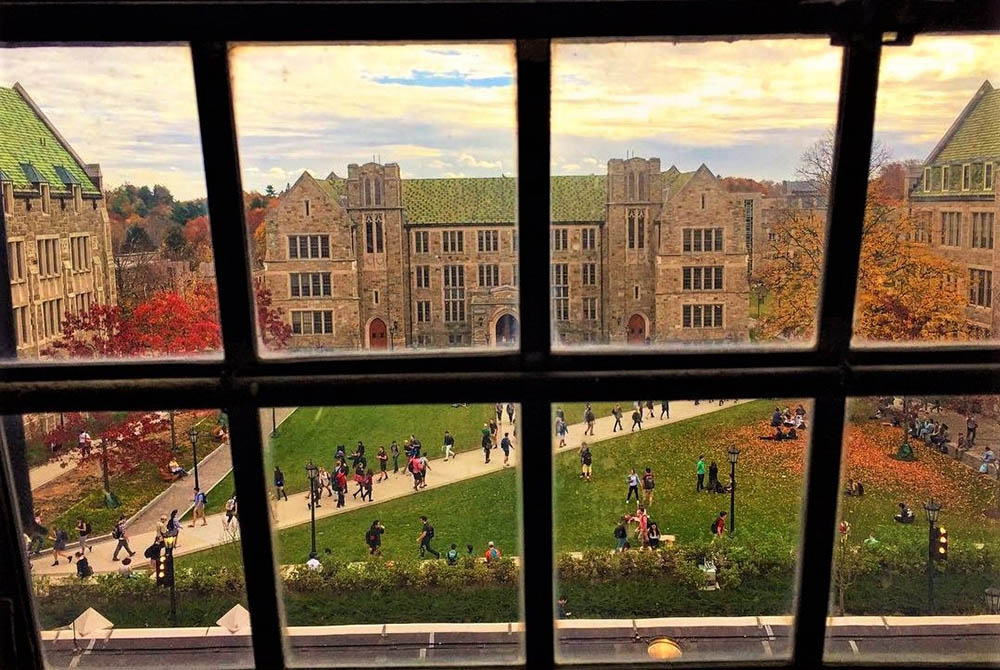 Students walk through a quadrangle on the campus of Boston College in this 2018 photo. (Wikimedia Commons/BCLicious)

The unusual request represents an escalation in the nearly decadelong campaign led by students to press the Boston College administration and board of trustees to divest its $2.6 billion endowment of fossil fuel stocks. While no current students or faculty signed on to the complaint, the student group Climate Justice at BC supported the move.

"I should be studying for finals or writing a paper right now, but instead I am here … we know that we cannot stay silent and that we have tried all formal avenues to work with BC," Kyle Rosenthal, a senior and member of Climate Justice at BC, said at a virtual press conference Dec. 15.

The 28-page complaint, filed the same day with state Attorney General Maura Healey, alleges that the Boston College trustees are violating their fiduciary duties to the campus and wider community, as defined by state law, by continuing to hold investments in the fossil fuel industry. It argues that because such holdings finance activities that fuel climate change and harm people and the planet, they violate the school's mission and values, which they say the trustees are "legally bound to uphold" in university investments.

The complaint states that holding fossil fuel stocks — estimated by the signers to be worth $200 million, a figure not confirmed by Boston College — the trustees are also putting the endowment at financial risk, as oil, gas and coal companies have underperformed in the market and face uncertain futures.

"As concerned students, faculty, political leaders, civic groups, and community members, we ask that you investigate this conduct and that you use your enforcement powers to order the Trustees of Boston College to cease their investments in fossil fuels," the complaint letter reads.

The Massachusetts attorney general's office confirmed to EarthBeat on Dec. 15 that it is reviewing the complaint.

Copies were also sent to Boston College president Jesuit Fr. William Leahy, along with several trustees and high-level administrative officials, the eastern Jesuit providence, the Archdiocese of Boston and the Vatican's Congregation for Catholic Education.

In an emailed statement, Boston College spokesman Jack Dunn said the school believes the complaint "has no basis in Massachusetts law."

He restated the school's long-held position that it "is opposed to divestment from fossil fuel companies on the grounds that it is not an effective means of addressing climate change," preferring instead actions like reducing energy consumption and other sustainability measures. The campus, for instance, draws 100% of its electricity from renewable energy sources.

Dunn added that Boston College views its endowment solely as a permanent funding source for the university and "not a tool to promote social or political change, however desirable that change might be."

The complaint was prepared with the Climate Defense Project, a group of Harvard Law School graduates who as students filed the first fossil fuel divestment lawsuit in 2014.

It is signed by 27 Boston College alumni, as well as several parishioners of St. Ignatius Church on the campus. Also joining are a number of climate groups, including the state chapters of 350.org and the Sierra Club, the Boston Catholic Climate Movement, Catholic Divestment Network, GreenFaith, Boston City Councilwoman Michelle Wu and James Hansen, a leading climate scientist and former director of the NASA Goddard Institute for Space Studies.

During a panel discussion at Boston College in February, Hansen and others called for the school to include divestment among its other sustainability efforts. Months earlier, former Irish President Mary Robinson encouraged the school to move toward divesting from fossil fuel companies and investing in clean energy sources "as quickly as possible."

Ted Hamilton, a staff attorney with the Climate Defense Project, said that Boston College's trustees are bound by statutes related to how charitable assets are managed, including reflecting the institution's values in its financial dealings. He said there's an "extreme contradiction" between the school's stated mission, including "the pursuit of a just society," and what its investments in fossil fuels are funding.

The complaint is similar to one filed in November 2019 with the New York attorney general by students and faculty at Cornell University. In May, Cornell's board of trustees approved a moratorium on new private investments in fossil fuels and agreed to increase investments in renewable energy. Some divestment advocates saw the complaint to the attorney general as raising pressure on the school to act — an outcome students at Boston College hope to repeat.

Zygmunt Plater, an environmental law professor at Boston College, called the letter "a substantial complaint." Attorneys general have the responsibility to monitor charitable trusts, he added, so it will be up to Healey's discretion whether and to what degree to initiate an investigation within her office's nonprofit and charities division.

"My guess is that it will be taken seriously, because it is quite seriously put together," Plater said.

Since 2008, the Global Warming Solutions Act has legally required Massachusetts to reduce its greenhouse gas emissions. The petitioners hope that law, along with Healey's track record of environmental lawsuits — including suing ExxonMobil and taking on the Trump administration — will lead her to take up their complaint.

"I think it's a particularly receptive office to hearing this claim," Hamilton said.

Over the years, Boston College students have supported fossil fuel divestment through a series of student government resolutions and referenda, most recently in February 2019, when 84% of undergraduates called for their school to divest. They also have held protests and rallies and sent hundreds of letters to university officials.

To date, few of the 220-plus U.S. Catholic colleges and universities have publicly divested from fossil fuels. They include the University of Dayton, Seattle University and most recently Georgetown University, which made the decision in February. Within the global Catholic Church, more than 200 institutions have committed to divesting or avoiding fossil fuels in their financial holdings. In May, the head of the Vatican Bank confirmed that it does not maintain investments in fossil fuels.

The complaint cites as precedent for factoring non-economic criteria into investment decisions Boston College's participation in the 1980s in the divestment movement to end apartheid in South Africa. "If our investment advisor bought stock in a company in clear violation of our ethical standards, we would dump it without questioning it. Some stocks are just not worth it," the complaint quotes treasurer John Smith saying at the time.

The complaint also points to a set of ethical investment guidelines posted on the endowment's webpage, removed since 2016, that stated investments by the school should uphold its ethical, social and moral principles "so that gains from investments will not be derived from fraud, abusive power, greed, or injustice," and that "the University will not undertake new investments in companies that operate in conflict with these principles."

Students advocating for fossil fuel divestment have also pointed to recent statements and teachings from the Vatican and the Society of Jesus.

In June, a special Vatican working group on Pope Francis' 2015 encyclical "Laudato Si', on Care for Our Common Home" issued guidelines for implementing its teachings. Among them: "Promote ethical, responsible, and integral criteria for investment decision making, taking care not to support companies that harm human or social ecology (for example, through abortion or the arms trade), or environmental ecology (for example, through the use of fossil fuels)."

In October, Francis recommended divesting from companies that fail to protect the environment, a position also adopted by bishops a year earlier at the special synod on the Amazon. The pope's comments were followed by remarks during a Dec. 12 United Nations climate summit from Cardinal Peter Turkson, who urged, "Governments must stop investments in fossil fuels."

Asked whether Boston College has reevaluated its divestment position in light of such Vatican directives, Dunn told EarthBeat, "Boston College is a private university, and its decisions regarding investments and governance are made by university leadership in concert with the board of trustees. While we respect the Vatican's guidance on this issue, our position regarding divestment remains unchanged."

Rosenthal, the Boston College student, said that members of Climate Justice at BC last met with the administration in the spring semester, before the coronavirus pandemic shut down campus. No substantial discussions have occurred since.

"We have exhausted every option available," Rosenthal said.