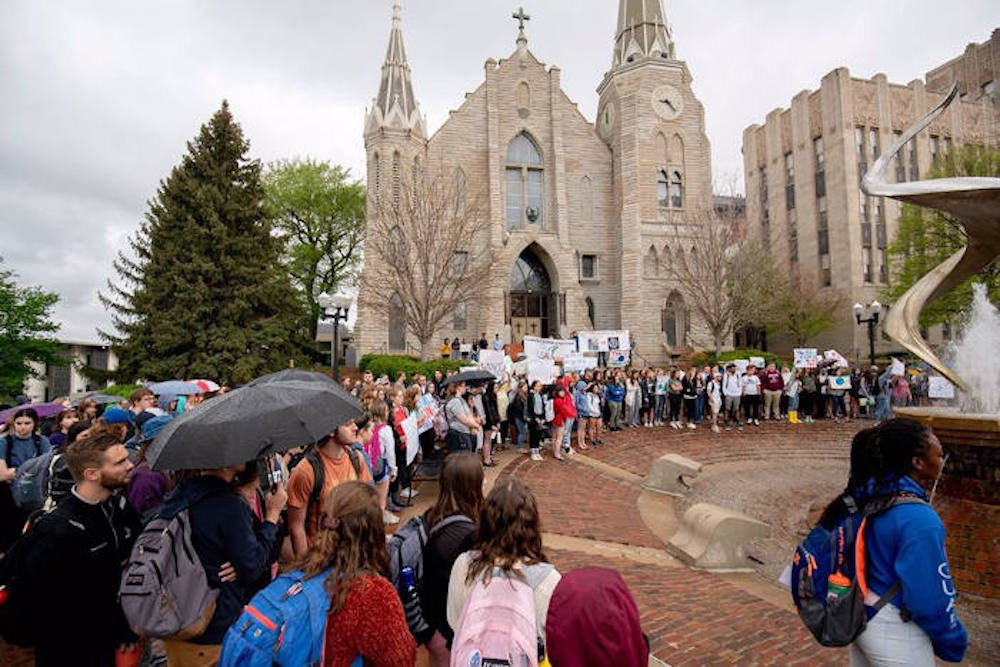 After months of mounting student pressure, Creighton University announced it will partially divest its half-billion-dollar endowment from fossil fuel companies.

In a campus-wide email Feb. 18, Creighton president Jesuit Fr. Daniel Hendrickson said the Jesuit school in Omaha, Nebraska, will reduce investment holdings within its $568 million endowment from 8.9% to 5.7% in companies that profit from fossil fuels but don't own fuel reserves.

Hendrickson said such companies, like utilities and those constructing and overseeing pipelines, draw a significant portion of their profits from the production, extraction or distribution of the carbon-emitting fuel sources but do not possess fossil fuel reserves themselves.

The partial divestment plan, which was approved by the board's investment subcommittee, does not take action on the roughly 1.5% of Creighton's portfolio invested in what's known as the "Carbon Underground 200" — the largest coal, oil and gas companies whose global energy reserves account for the greatest potential emissions of carbon dioxide, a potent greenhouse gas whose release into the Earth's atmosphere has accelerated the warming of the planet. Cutting ties with these companies was a primary demand of students in a referendum they widely approved last semester.

The move is effective Friday, the same day Creighton's board of trustees will meet in Phoenix, where it is building a new medical school. It comes on the heels of fellow Jesuit school Georgetown University's decision to fully divest from fossil fuels, and nearly three months after Hendrickson initially declined a student request to enact a two-tiered strategy making their school's endowment entirely fossil free by midcentury.

Creighton students called the decision "good news" but also criticized the administration for not putting forward a timeline for full divestment — something they pledged to continue to pursue.

"While we are thankful for the action they have decided to take, we are waiting for more," senior Blake Van Jacobs, a member of CU Climate Movement, said in a statement. "We have done our part and leveraged our power as students to make the case, and now it is time for the Board of Trustees to do their part and truly be stewards of Creighton's mission."

Led by CU Climate Movement, students have launched public actions and media campaigns over the past year to increase pressure on their school to cut ties from fossil fuels, the primary driver of climate change, not only for financial reasons but to align investment strategy with Catholic and Jesuit values that prioritize care for creation.

Students told NCR it remains their priority to get the university to end investments in the highest-emitting companies. Among the companies listed on the 2018 update of the Carbon Underground 200, compiled by Fossil Free Indexes, are many international corporations and major energy brands like ExxonMobil, Peabody Energy Corp, BP, Royal Dutch Shell and Chevron.

In November, students passed a non-binding referendum with 86% of the vote that called for a two-phase divestment by their school. Along with freezing any new investments in fossil fuel companies, the referendum asked Creighton to divest from the top-200 carbon-emitting companies by 2025, and to achieve full divestment by 2050 — the same year the university has targeted to achieve carbon neutrality on campus.

Days after the resolution passed, Hendrickson announced the university would not implement a total fossil fuel divestment policy "at this time."

In response to questions from NCR, including what led to the move to partial divestment now, Creighton issued a statement saying "these decisions are not made overnight" and noted the eight-year process at Georgetown to the point of full divestment from fossil fuels.

"Sound decisions are reached through dialogue and discernment," the university said, adding "The impact from these decisions could be felt for months and years to come. It is important to have programs and policies in place that will support the University's commitment to our common home." 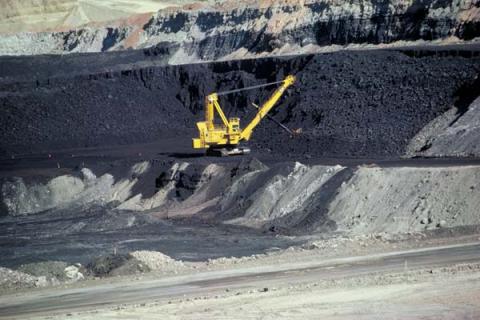 Coal mine in Wyoming (Wikimedia Commons/U.S. Bureau of Land Management)

The statement also highlighted other efforts Creighton has made on sustainability, including hiring a director of sustainability, who will begin the position next month. In addition, it has created an energy master plan, along with strategies to reduce its campus carbon footprint and has integrated sustainability into academics, research and programs. Last June, the campus played host to the first of three biennial conferences on ingraining Pope Francis' encyclical "Laudato Si', on Care for Our Common Home," into the U.S. church. Next month, it will hold two public lectures on climate change.

Hendrickson in his Feb. 18 message said in the fall he encouraged the board to review the school's investment guidelines with an eye toward the twin goals of supporting carbon emissions reduction and upholding its fiduciary obligations. The board in turn responded with four recommendations, among them a review of the potential impact of different divestment scenarios on expected return and portfolio volatility.

The board also recommended Creighton review its investment managers, with an effort to improve its portfolio's environmental, social and governance score; engage peer universities concerning their investment assessment practices, and add an investment allocation target to its portfolio that would have a positive impact on the United Nations Sustainable Development Goals, which include combatting climate change, ensuring clean affordable energy and increasing sustainability in cities and ecosystems.

A climate change task force, comprising eight faculty, nine staff and seven students of Creighton, is set to meet in March to begin designing to decrease individual and institutional reliance on fossil fuels and meet its carbon neutrality goal.

While welcoming those steps, students have remained focused on full divestment as a critical step.

Last week, two dozen students delivered a letter to Hendrickson urging him to implement their divestment referendum by April 1 "to hold Creighton to the standards of its own mission" and promising to escalate their efforts if he did not.

Feb. 20, members of CU Climate Movement plan to lead fellow students, faculty and Jesuits in a symbolic march from the campus' St. John's Parish to the Mike and Josie Harper Center, which houses the Heider College of Business. Along the way, they plan to pray from Laudato Si' and for each member of the board of trustees and highlight any trustee connections with the fossil fuel industry, all while delivering the message: "We demand that you put aside your self-interests and do what is best for the University and what is best for our futures."

A January article in the progressive Nebraska magazine Triumph pointed out several of those ties and referenced funding for the business college from the Charles Koch Foundation — whose billionaire namesake, along with his recently deceased brother David, built their profits from oil refining while bankrolling climate denial and deregulation campaigns. A Creighton spokeswoman has told NCR that "there is absolutely no connection" between the university's decisions regarding divestment and donations from the Koch foundation.

Read this next: Boston College students and faculty push to reject Koch funding – and Koch values