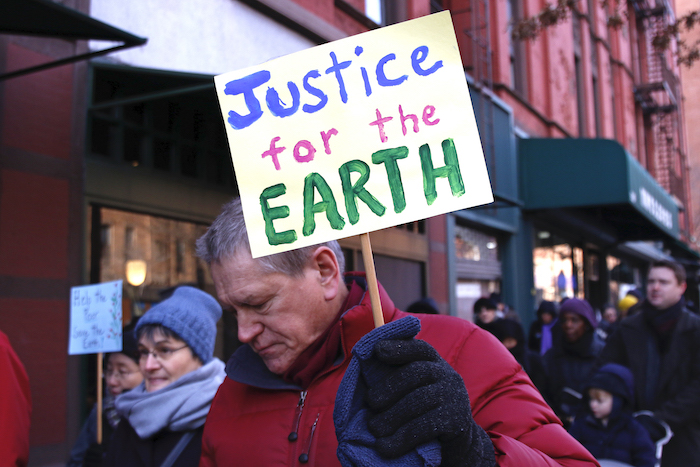 This week and next mark the beginning of a crucial period for Americans determined to help force the systemic change it will take to address the climate crisis. They can help pick a president who'll do something about it.

The issue most on the minds of the people who turned out for the Iowa caucuses on Monday night was health care, with 42 percent of the respondents to an entrance poll listing that as their top concern. But the second most frequently listed issue was climate change, with 21 percent describing that as the concern that most influenced their choice of a candidate.

That sentiment was most prevalent among the two candidates finishing ahead of the pack Monday night, Vermont Senator Bernie Sanders and former South Bend, Ind. mayor Pete Buttigieg.

Recent surveys show that Catholic attitudes on climate roughly mirror those of the general public, with three-quarters of American Catholics agreeing that society should do something to address global warming.

Less clear is how climate will factor into Catholics' decisions about individual candidates.

The U.S. Conference of Catholic Bishops declared at their November meeting that abortion should be the "preeminent" consideration in their choice of a candidate. As NCR national correspondent Heidi Schlumpf reported:

…The bishops did not discuss or receive any report from the just-concluded Synod of Bishops for the Amazon, nor did climate change receive much attention. In fact, during a press conference, the outgoing bishops' conference president, Cardinal Daniel DiNardo of Galveston-Houston, called climate change "important" but not "urgent."

A more nuanced view was proposed in a speech Thursday by San Diego Bishop Robert McElroy, who reminded Catholics that voting involves "choosing a candidate for public office, not a stance, nor a specific teaching of the Church."

He stressed the importance of assessing "the specific ability of a particular candidate to actually advance the common good," noting: "In making this assessment, opportunity, competence and character all come into play."

Arguing that "Catholic social teaching cannot be reduced to a deductivist model when it comes to voting to safeguard the life and dignity of the human person," he offered an example:

… Contraception is intrinsically evil in Catholic moral theology, while actions which destroy the environment generally are not. But it is a far greater moral evil for our country to abandon the Paris Climate Accord than to provide contraceptives in federal health centers.

He addressed the relative importance of the abortion and climate issues like this:

If you'd like a snapshot of how five Catholics decided to back each of the five Democratic candidates who did the best in Iowa, you can read their accounts here. (Catholic cases for Sanders and Warren coming Monday and Tuesday.)

Here’s some of what’s new on EarthBeat this week:

Since EB Weekly is running a bit long this week, we suggest you explore additional climate-related news by visiting our Interfaith Climate Tracker

You can register for Loyola University's 2020 Climate Change Conference via this link. The conference is focused on "Accompanying youth to a hope-filled future." You’ll find more events like this -- virtual as well as in person -- on EarthBeat’s Event Calendar. And don’t forget to post upcoming events that you’re involved in!

Earlier this week, I invited some of the most devoted readers of EarthBeat Weekly to let us know what they're doing, personally, about the climate crisis by submitting a Small Earth Story of no more than 150 words. When I opened my inbox the next morning, I was delighted to discover that Susan Vogt of Covington, Kentucky had done exactly that.

In response to my follow up email, she wrote: "It sounded like you were looking for small actions that an ordinary person could take. I think a reference to 'plastics' caught my eye and I realized I could just take a recent excerpt from my blog. It's simple. It's relevant. It's an example."

My bigger concern is how to parlay these small acts of consciousness raising into actions that will make a bigger impact. That's why my husband and I are currently leading Drawdown workshops in the Greater Cincinnati area. We need to multiply our efforts. It's not just about doing more and frenetically running around like busy bees, but discerning where my limited energy can best be multiplied for the biggest impact.

Susan touched on a tension at the core of the steps people of faith are taking to address the climate crisis: Doing what we can to initiate more climate-friendly personal lifestyles at the same time we address systemic changes. You can submit your Small Earth Story here.

We hope you’ll forward this week’s newsletter to anyone you believe might want to subscribe. They can do so here. And if you’d like to support EarthBeat, please join NCR Forward for as little as five bucks a month.