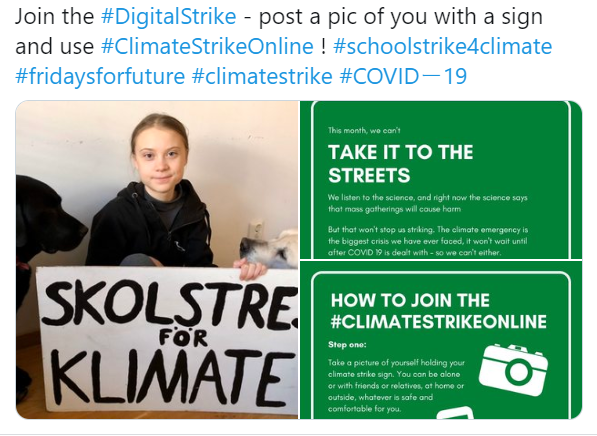 We send the EarthBeat Weekly newsletter on Fridays. It includes links to what's new on EarthBeat, NCR's special section on care for creation, as well as links to articles published elsewhere that we think you'll be interested in.

To get the latest from EarthBeat in your inbox, sign up for EarthBeat Weekly.

Because I know you're busy and tired and so so eager to get to a rundown of all of EB's content from this past week, I'm switching things up.

Directly below you'll find what's new on EarthBeat and in climate news this week.

Then, if you're like me and have also been pondering how climate activists might make their mark in 2020 (while stuck on their couches), scroll to the bottom to read my thoughts on activism and the internet.

Here is what's new on EarthBeat this week:

Here's some other climate-related news from this week:

April 22: This online panel will discuss how climate change is impacting farmers and their land, and explore ways to build a more sustainable and resilient food system. For more events, check out Earth Beat's Event Calendar. One advantage of so many events moving online is their accessibility to a wider audience. If you'd like to expand the audience of your next virtual climate event, please post it here.

Finally, here's what I've been thinking about this week:

Climate activists have always been fighting with their backs against the wall – that "wall" being the ever quickly dissipating amount of time to compel their aloof elders—I mean elected officials—to act so that existing climate change does not become a certain climate catastrophe.

(Got all that? Deep breath.) 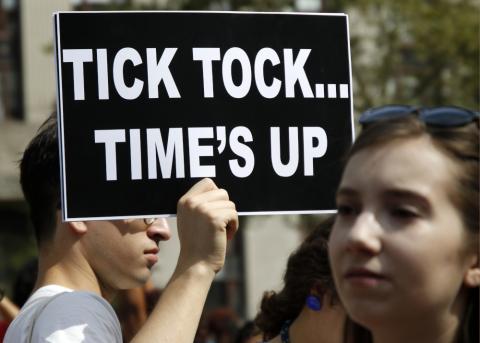 Now, with millions of individual activists confined under their roofs for the foreseeable future, the movement at large feels boxed into a corner. No longer will these young dreamers be able to flock to the streets each Friday for the mass demonstrations that define their movement. No, the revolution will not be televised. It will be streamed online.

But wait. Lucky for us – all who care about this beautiful blue satellite we call home – our heroes love the internet.

As Evan Weber, Sunrise Movement’s co-founder and national political director, told POLITICO: "We’re an organization of a bunch of millennials and Generation Z so in many ways we grew up online and are well-equipped to meet this moment."

I was born in 1995, right smack in between the Gen Z and millennial cut off dates. (Hi, this is Jesse Remedios btw, not Bill Mitchell. Nice to meet you!) NCR Executive Editor Tom Roberts often proudly refers to me as a "digital native" whenever I help him use Google Maps to find directions to his lunch meetings. (To those of you who meet with Tom, if you’re reading this, I say, you’re welcome.) So, look, I get where Weber is coming from and I agree, our generation is uniquely prepared for the fight ahead under these strange circumstances.

But, honestly, I’m worried about the challenges mobilizing in cyberspace poses to my activist friends.

The dilemma as I see it is about the difference between building power and actually wielding it. Throughout the 21st century, we’ve already witnessed the internet’s utility in building tremendous political power. Young Egyptians’ use of social media in the 2011 Arab Spring and the misinformation campaign that helped elect Donald Trump in 2016 come to mind as two dramatic and distinctive examples. In both cases, while the internet facilitated a tremendous growth of power, that power wasn’t actually employed until people physically left their homes. In Egypt, Facebook groups organized demonstrations in Cairo’s Tahrir Square; in the U.S., "fake news" led people to the polls in swing states.

Even in the internet age, change has required people to move their bodies.

I have no doubt the climate movement will make great strides in building power during this pandemic. In this week’s Burning Question, Greta Thunberg’s "Talks for Future" and Sunrise Movement’s "Sunrise School" are featured as forms of virtual activism people can easily get involved in. Both will certainly build up the skills and knowledge-base of the climate movement’s young leaders, as well as strengthen important social networks.

How climate activists ultimately take "action" in the time of pandemic will depend on many undetermined factors, including how elections operate and when international climate conferences are able to resume. Without knowing that, it will be somewhat difficult for activists to know exactly where and how to best place their pressure. Overcoming misinformation and social media algorithms, and avoiding the trappings of a polarized world wide web will be further obstacles to activists’ work.

Still, for me, the central question remains: If our shelter-in-place orders last longer than expected, how can the movement actually wield its power in 2020?

The moving images we saw in 2019 will not easily be replaced. It’s hard to imagine lone selfies and aggressive tweetstorms filling us with the sense of hope, anger, urgency and solidarity we felt watching millions of children marching in unity to demand a better future last September.

That's not to say things are hopeless.

Has anyone ever told you that your phone has more computing power than all of NASA did in 1969 when it put a man on the moon?  Figuring out how to harness all that power, from the "comforts" of your couch or bedroom or dinner table, is the challenge at hand. It'll take a lot of creativity to fight your way out of this corner. But from one "digital native" to a whole bunch of others, I want to say that I believe in you. You got this.