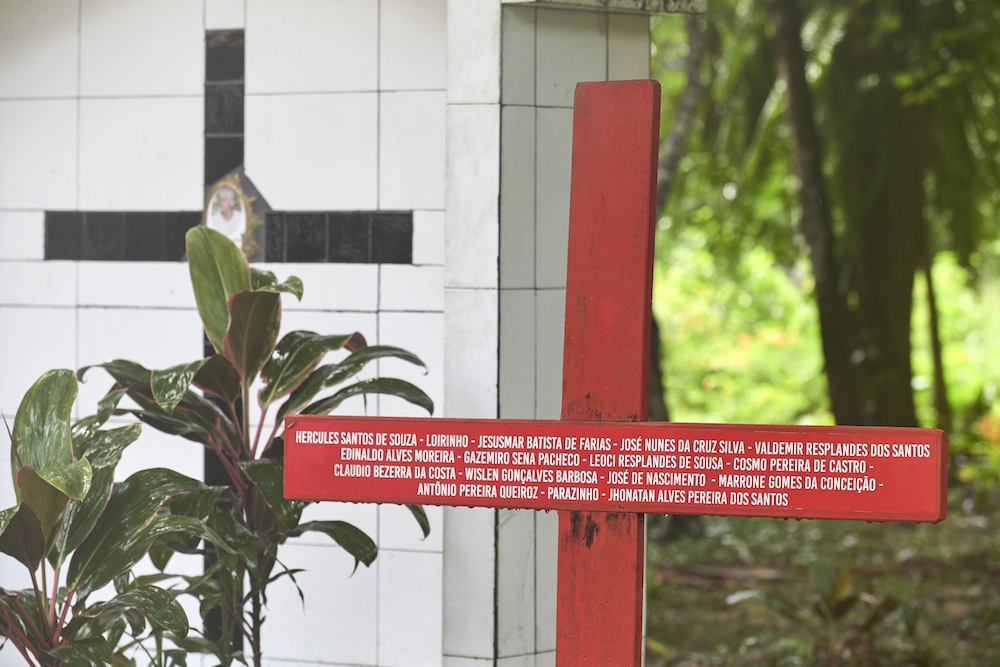 A red cross stands beside the grave of Notre Dame de Namur Sister Dorothy Stang, who was assassinated in the Brazilian Amazon in 2005. The cross bears the names of 16 local rights activists murdered since Stang's killing, and church workers say another cross is needed for still more names. (CNS Photo/Paul Jeffrey)

Some years back, during a protest by Indigenous communities in one of Peru's largest and most polluted Amazonian oil fields, a delegation of oil company managers and officials from the national government arrived to negotiate a solution. Since the trip had been long and the weather was hot, a community member approached them with a tray bearing glasses of water.

The liquid had been drawn from the local source of water for drinking, cooking and washing — the Corrientes River, laden with sediment, metals and other pollutants.

The community leader who told me that story described, with a mixture of irony and glee, how the visitors had attempted to keep the water from touching their lips while trying not to appear to be rejecting the gesture of hospitality.

I remembered that incident a few years later, when I was reporting on an oil spill from a pipeline that passed through a different Amazonian community. Again, a government delegation arrived, and talks went on through the morning. At midday, the community leaders invited the officials to a lunch that had been prepared.

Two of the government representatives wondered nervously what they would be served to drink. They sighed with relief when they saw a bottle of water at the place set for each of the visitors.

Each of those half-quart bottles cost the equivalent of about $0.70 — well beyond the reach of families whose daily income might not be more than a couple of dollars. Everyone else at the table was served a fruit drink made with river water or rainwater.

Both of those anecdotes came to mind as I edited stories this week — it seems like this has been water justice week on EarthBeat.

On Sept. 13, the nonprofit watchdog group Global Witness reported that 227 people worldwide were murdered in 2020 for defending their territories — the water, forests and other ecosystems where they live. That's an average of more than four a week.

Many were protesting projects like mining or dams that would affect the quality or quantity of water available to their communities. Human rights experts say the real number of killings is probably higher, and that even more people suffered threats or were forced from their homes by land grabbers.

In countries like Colombia, Nicaragua and the Philippines, which had some of the highest per-capita murder rates, logging, mining and industrial agriculture, including cattle ranching and oil palm plantations, were the main sources of conflict with local communities.

Behind those activities lies consumer demand in distant places, including the United States, Europe and China. In a commentary for EarthBeat, Alex Mikulich suggests five public policy areas in which changes could facilitate a shift from a destructive economy based on constant growth toward a "circular" economy that eliminates waste and pollution and emphasizes reusing, repairing and recycling products and materials.

Embracing those principles implies thinking differently about the place of humans in creation, writes Franciscan Fr. Daniel P. Horan, and recognizing, "as St. Francis did centuries ago, that we are truly siblings with all other creatures."

Such awareness would also help us appreciate the gift of creation, as Brenna Davis of the Ignatian Solidarity Network reminds us in this week's "At Home in Creation" reflections.

Davis shares a conversation she had with Teresa Tsosie, who reflects on the drought that has spread across the Navajo Nation's lands in Arizona. Davis also reminds us that even when we feel a desert within ourselves, we are promised the gift of living water that invites us to gratitude.

And in a Small Earth Story, Christina Randazzo, a junior at the University of Notre Dame, wonders whether we will take the steps needed to address climate change so her grandchildren can someday enjoy the lake that awakened her passion for sustainability

This week's virtual events include the second in a series of presentations on "Vincentian Perspectives on Love and Justice for Creation" Sept. 19, and a lecture by Horan, who is also an NCR columnist, on "The spirituality of justice: racism and climate change, a Catholic response" Sept. 21.

You can find more information about these and other upcoming events on the EarthBeat Events page. And you can add your own group's events here.

If you're looking for a way to celebrate the Season of Creation with your faith community, you might like the 14 Stations of Creation, or "Way of Beauty," based on Laudato Si' and created by Salesian Fr. Gilbert Choondal of Nitika Don Bosco in Kolkata, India.

Do you have a favorite Season of Creation resource to share with other EarthBeat readers? Drop us a line at earthbeat@ncronline.org and tell us about it.

If you enjoy EarthBeat, please spread the word — you can pass along the link to EarthBeat Weekly or suggest to friends that they sign up here to receive this newsletter every Friday in their inbox. Thank you for reading EarthBeat!