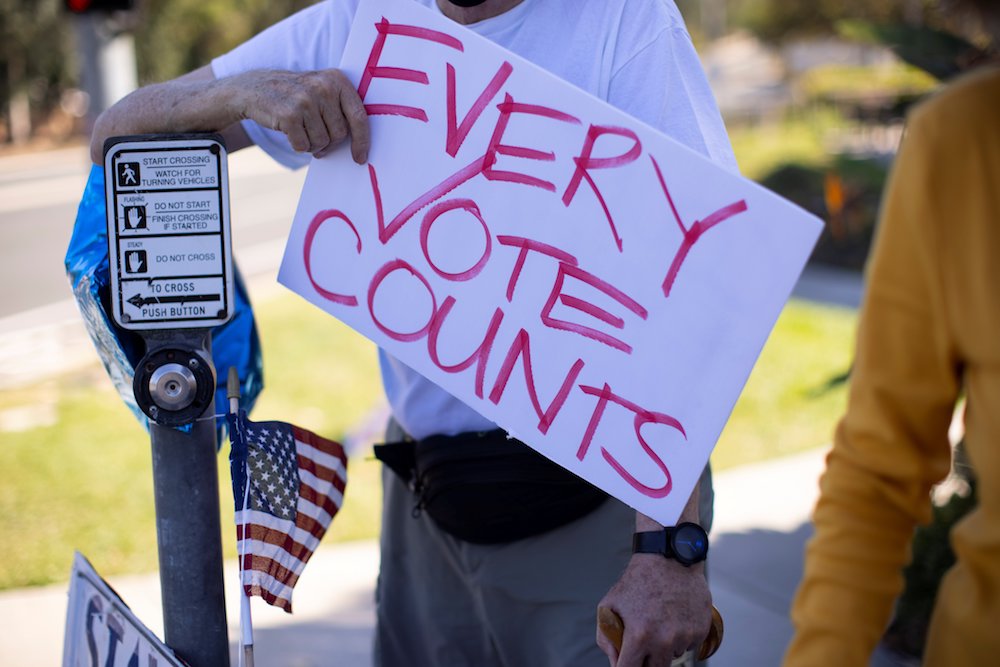 On climate issues, every vote counts at state and local level, as well as in national elections. (CNS photo/Mike Blake, Reuters)

Amid the uproar and uncertainty surrounding this week's U.S. presidential election — which have reverberated around the world — it's easy to lose sight of that famous saying, "All politics is local."

That's not to say that political decisions made in the U.S. don't have impacts far beyond the country's boundaries. Earlier this week, faith leaders in Central and South America, Africa and Asia told me about the implications of the U.S. presidential election for climate issues in their regions.

But it's a reminder that many decisions about energy — how much must come from renewable sources and what kinds of incentives are offered for greater efficiency, for example — are made at the local or state level. The same is true for transportation, especially public transportation, such as bus and rail systems. And local governments can help reduce food waste. State and local policies on all these issues have a big impact on greenhouse gas emissions.

In fact, despite the lack of national leadership on climate policy in the past three-plus years, many states are continuing efforts to reduce greenhouse gas emissions, keeping the country somewhat on course toward the goals it initially set under the Paris Agreement, as biologist Thomas Lovejoy told NCR environment correspondent Brian Roewe and me during an NCR Facebook Live conversation on Sept. 30. The U.S. officially withdrew from the Paris accord on Wednesday.

So how did some of these climate issues play out in local and state elections around the country on Tuesday, especially with regard to energy and transportation policy? Here are a few examples.

In gubernatorial races, Montana elected a pro-coal Republican, Greg Gianforte, while in North Carolina, Gov. Roy Cooper, who won a second term, is likely to keep the state on track toward its goal of carbon neutrality by 2050 through expansion of renewable energy. E&E News provides details of these races and energy-related issues in eight other states.

In Nevada, voters gave final approval to a constitutional amendment mandating that at least 50% of the state's energy come from renewable sources by 2030. The measure has been criticized by some who think that target is too high and others who say it is not ambitious enough, reports David Roberts for Vox.

Residents of Austin, Texas, approved funding for improving public transportation to reduce carbon emissions, while voters in Denver agreed to a 0.25% sales tax increase that will raise $40 million for programs to reduce greenhouse gas emissions and air pollution, as well as other climate-related programs, according to a statement from the non-profit U.S. Public Interest Research Group network.

In a close race, the Arizona Corporation Commission appeared set to gain two Republicans and one Democrat as members, which would give the body — which regulates electric, water and gas utilities — a 3-2 Republican majority. Although members in the past have not necessarily voted along party lines, the shift could affect the final vote on new rules aimed at boosting renewable energy and energy efficiency, reports Courtney Holmes at ABC15 Arizona.

In Louisiana, incumbent Public Service Commissioner Edward Skrmetta, who has been accused of corruption, faces a runoff election in December to determine whether he will keep his seat, reports New Orleans-based WDSU News. Rebecca Leber at Mother Jones published a pre-election roundup of that race, as well as similar races in Nebraska, Montana and Texas that could be decisive for shaping local energy-related climate policy.

In Texas, it's the Railroad Commission that regulates the state's huge oil and gas sector, and environmentalists across the country were watching the race between Republican Jim Wright, owner of an oilfield waste disposal company, and Democrat Chrysta Castañeda, an engineer and lawyer specializing in energy issues. But despite his challenger's strong financial support, Wright — who was fined in 2017 for violating waste disposal regulations — won the seat on the three-member board.

Many water issues are also decided locally, and there was an underreported piece of good news this week in Orange County, Florida, where residents voted overwhelmingly to grant local waterways the right to exist and to be free of pollution. The measure includes the Wekiva and Econlockhatchee rivers. Brett Walton at the non-profit Circle of Blue has the details about that vote and water-related issues that were on the ballot in Utah, Wyoming, Colorado and California.

These races highlight the ways in which local decisions about energy use can have a global impact by increasing or decreasing greenhouse gas emissions. So how interested are your neighbors in these topics? You can get an idea from this map, prepared by the Yale Program on Climate Change Communication.

Overall, more than three-quarters of people in the U.S. are interested in reading about actions being taken in their local communities, as well as by government and business, to address climate change. Interest varies greatly from place to place, however, and the map lets you zoom in on your own county to help you understand how the views of people in your own area fit into the bigger picture.

Here's more of what's new on EarthBeat this week:

You can find more information about this and other activities on our Upcoming Events page.

This has been a stressful cliffhanger of an election week. But if you take a moment to look back, were positive steps taken on climate issues in your city, county or state? Did you or your faith community take a stand on them? Or did the election make you think differently about local or global climate issues? If so, drop us a line and tell us about it at earthbeat@ncronline.org.