by Brian Roewe
Leaders
This article appears in the Laudato Si' at Five feature series. View the full series. 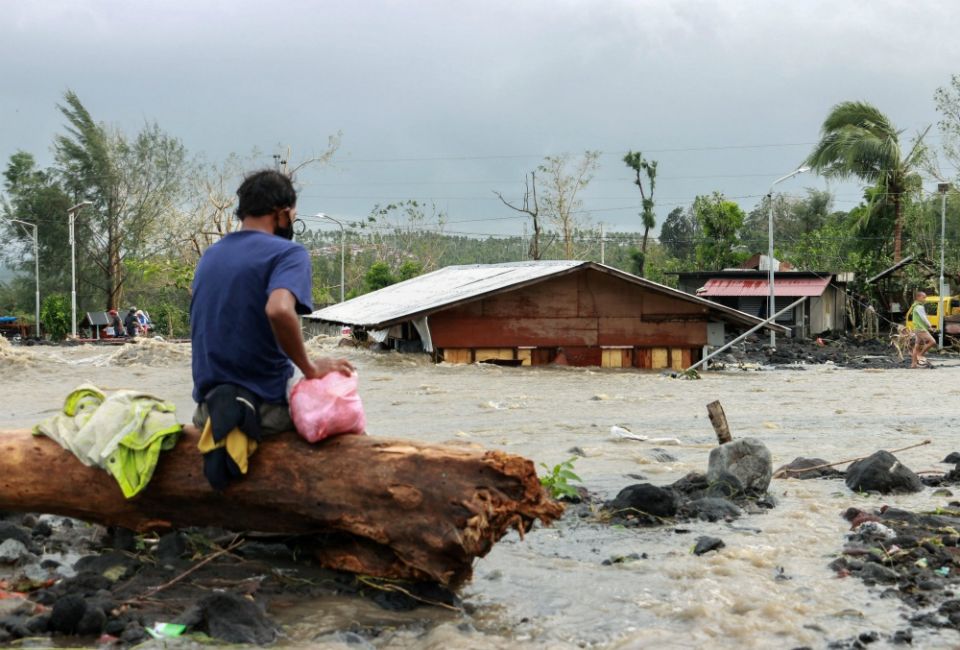 A man looks at his house buried under the pile of rubble and sand in Daraga, Philippines, Nov. 1, following flash floods brought by Super Typhoon Goni, also known as Rolly. The storm left at least 10 people dead and three missing. (CNS/Reuters/Nino N. Luces)

As the world looks to solutions to the dual crises of climate change and the coronavirus pandemic, its religious traditions have much to offer through their shared commitment to care for the Earth, according to a Vatican official.

Cardinal Miguel Ángel Ayuso Guixot, president of the Pontifical Council for Interreligious Dialogue, said the COVID-19 pandemic and the suffering it has wrought stem from a pervasive "spiritual void" and humanity's broken relationships with God, neighbors and the Earth itself, echoing Pope Francis' words in his 2015 encyclical, "Laudato Si', on Care for Our Common Home."

The disrepair of those relationships, Ayuso added, is evident in the disproportionate impact of COVID-19 and rising temperatures on the world's poor and marginalized people. With it, he said, has come "scandalous inequality, discrimination and indifference."

But the present moment, Ayuso said, offers "an opportunity and a grace" for restoration, beginning with religion playing a vital role in nurturing greater respect for creation and one another.

"Our fragility as human beings and our interdependence on one another, as has been eloquently exposed by the pandemic, is more than enough reason for us to be united and committed not just to ward off the coronavirus but also to work together for the betterment of humanity," Ayuso said, adding that "concern for the environment has now become a major interreligious preoccupation."

The Spanish cardinal delivered the comments as part of his keynote address at a virtual conference held Oct. 29-30 by Georgetown University's Berkley Center for Religion, Peace and World Affairs. The conference, "Interreligious Responses to Laudato Si'," was hosted at the request of the Vatican's interreligious dialogue office, as part of the special Laudato Si' Year commemorating the landmark encyclical's fifth anniversary.

Across the two days, speakers highlighted the importance Laudato Si' has held in particular beyond the Catholic Church, in the reflections and actions it's inspired in other faith communities.

In the encyclical's opening, Francis made clear he wished for a wide audience, addressing it to "every person living on this planet."

"Laudato Si' has landed on fertile ground," said Mary Evelyn Tucker, co-founder with her husband, John Grim, of the Forum on Religion and Ecology at Yale University. She called Laudato Si' "a document of immense importance to people inside and outside the Catholic Church." 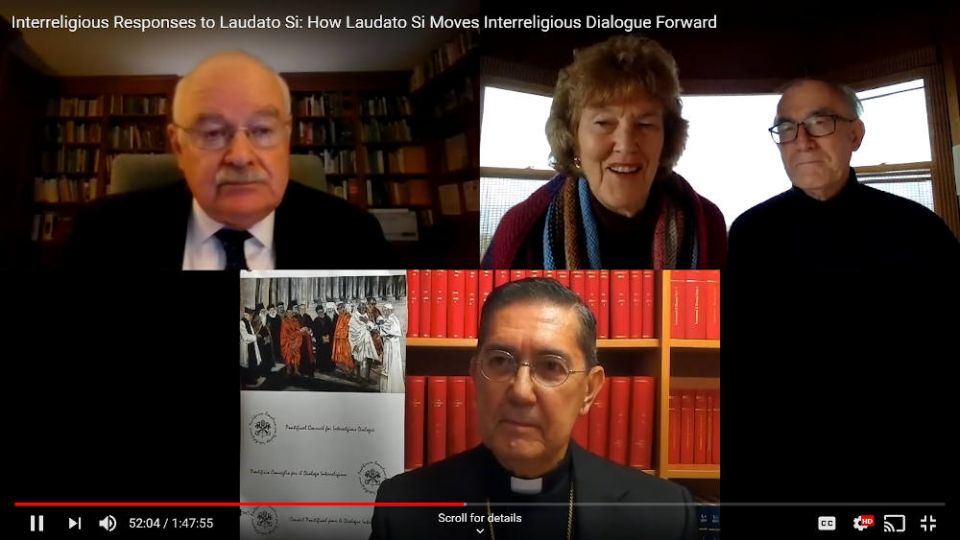 Cardinal Ángel Ayuso Guixot, president of the Pontifical Council for Interreligious Dialogue center, takes part in a discussion during the "Interreligious Responses to Laudato Si' " conference on Oct. 29. Also pictured, from left, is John Borelli of Georgetown University, and Mary Evelyn Tucker and John Grim, co-founders of the Yale Forum on Religion and Ecology. (NCR screenshot)

The Yale Forum website has collated a bevy of resources on the encyclical, as well as numerous examples of projects, books and statements on ecology from other faith traditions.

"The encyclical has become a catalyst to ignite religious leaders and laity, organizations and communities in a worldwide effort that brings us together in concern for our common home," Tucker said.

"All of us, irrespective of whichever religion we profess, have a moral and religious responsibility to shape an ethic of care for the Earth, which is our shared home. A common commitment to creation by people of different religious traditions can offer real hope for the future of life on Earth," he said.

One of the clearest interreligious connections brought about by Laudato Si' was in its drafting and release.

Laudato Si' was groundbreaking, Chryssavgis said, in that it was the first papal encyclical to prominently and extensively refer to teachings of an Orthodox prelate, specifically Bartholomew, known as "the Green Patriarch."

Many don't realize, Chryssavgis added, that when the text debuted in June 2015 at a Vatican ceremony, it was released jointly by Cardinal Peter Turkson and Metropolitan John of Pergamon, another unprecedented moment.

This closeness between the two churches exhibited with Laudato Si' meant the papal encyclical was anticipated not only from an ecological perspective, "but also in the context of inter-Christian openness" and communion, Chryssavgis said.

"I believe that it is hardly fortuitous, but indeed quite providential, that these two bishops are leading their respective communions at this critical moment," he said.

The Catholic-Orthodox connection wasn't the only one brought by the encyclical. Before Laudato Si' was issued, the pope met with a group of Buddhists with whom he shared the essence of the text. At the same time, the pope also stressed the importance of fraternity.

"That nothing can be accomplished without the spirit of fraternity," meeting participant Kyoichi Sugino, deputy secretary general of Religions for Peace, said of the pope's message. 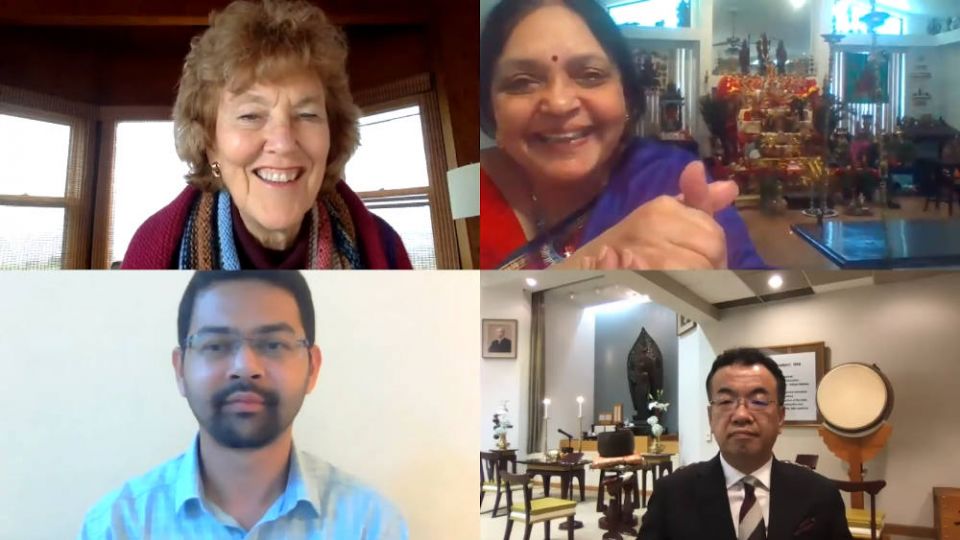 After Laudato Si' was issued, leaders in Buddhist, Hindu and Islamic traditions also issued their own declarations on the religious imperatives for the world to address climate change and ecological issues. Together, they delivered a powerful cross-religious message to world leaders ahead of the United Nations climate summit, COP 21, in December 2015, where the Paris Agreement was adopted. The encyclical has been credited as pivotal in achieving that accord among nearly 200 nations.

Others at the conference described how Catholic teachings on ecology in Laudato Si' mirror those of other traditions. Vasudha Narayanan, a Hindu professor at the University of Florida, said she has used the teachings of 11th-century South Indian philosopher Ramanuja to understand the pope's encyclical, which she called "literally and figuratively groundbreaking."

Muhammad Faruque, a visiting assistant professor at the University of Cincinnati, said Laudato Si' resonates deeply with a number of Islamic perspectives. He described the idea of the "great chain of consciousness," wherein everything in nature is consciousness and all levels of reality in nature are interconnected.

The various and overlapping ways in which world religions prioritize caring for the Earth were recently compiled in a book titled Faith for Earth: A Call for Action, published by the U.N. Environment Program and the Parliament of the World's Religions.

Iyad Abumoghli, director of the U.N. Environment Program's Faith for Earth Initiative, said the program was created in 2017 to better engage with faith groups around the United Nations' Sustainable Development Goals. It has also worked across faiths to implement Laudato Si' at an international level.

Faith-based organizations have the power to make a difference, he said, as together they are the world's fourth-largest holder of investments and oversee half of its schools.

Participants highlighted ways in which faith traditions are embracing environmentalism. Small-scale and urban farms in Jewish communities, along with Teva educational programs to introduce children to nature. Increasing focus on an Islamic-inspired form of permaculture farming, especially in Indonesia. Buddhist monks ordaining trees and working to address climate change in their monasteries. Hindu priests and believers planting trees.

"In order to prepare ourselves for the big paradigm shift, we have to build and accumulate small examples of people working in the spirit of Laudato Si'," Sugino said.

Added Abumoghli, "The movement has started but it is not enough. We need it to be the norm, not the exception."

Many see the global response to a post-COVID-19 world as providing that opportunity.

The Vatican has formed a task force led by the Dicastery for Promoting Integral Human Development to envision paths toward a more just and equitable world. Salesian Fr. Joshtrom Kureethadam, a member of the task force and coordinator of the dicastery's ecology and creation sector, said the pandemic has exposed the problems and divisions in the world all the more, with the cry of the Earth and the cry of the poor "only getting louder and louder."

Any transformative change requires a critical mass, Kureethadam said, which he quantified as approximately 3-4% of a population. The Vatican is working to spur such an ecological conversion though its Laudato Si' Action Platform inviting different facets of the church to take up seven-year journeys to sustainability.

"Hope is so important," Kureethadam said, "especially today in the context of the COVID. We need to provide a horizon of action where people can join it."

The crises brought by the pandemic and climate change present faith communities with an opportunity to come together, the Orthodox archdeacon Chryssavgis said, to help people undertake the conversion and transformation in lifestyles that solutions to both will require.

And doing that will be big challenge.

Chryssavgis recalled how his son referred to COVID-19 as a fascinating social experiment: one where scientists and medical experts have asked people to undertake a small thing to protect others — wear a mask — but the answer from some has been no, protesting that doing so violates individual rights and freedoms.

"What are the chances that people will respond to having less and hoarding less, or wasting less and sharing more?" he asked.