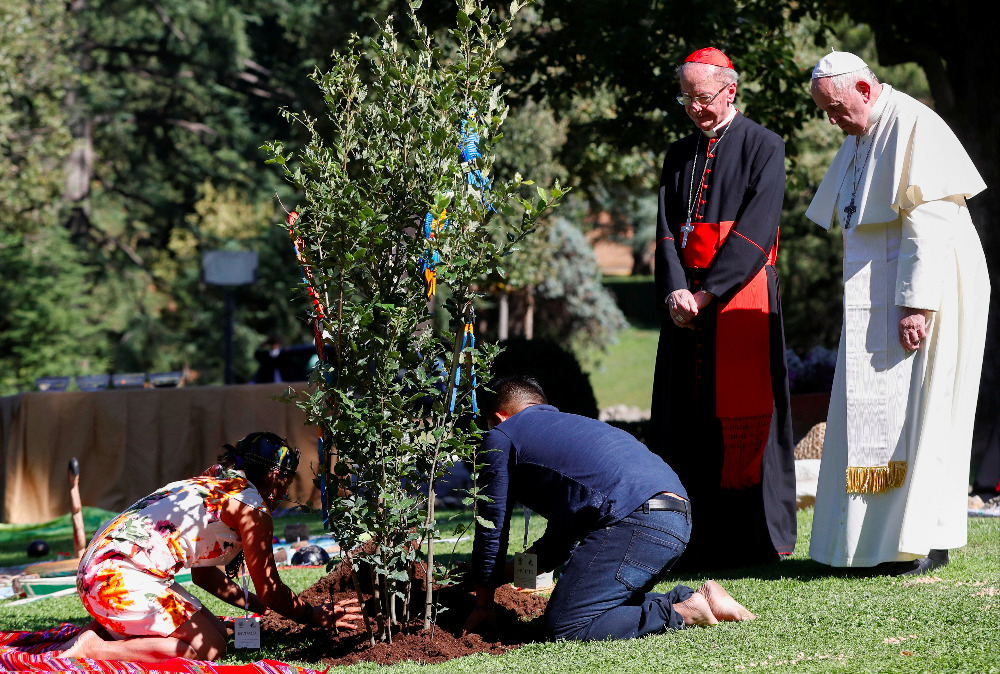 Pope Francis and Brazilian Cardinal Cláudio Hummes watch as a tree is planted in the Vatican gardens on Oct. 4, 2019, two days before the opening of the Synod for the Amazon. (CNS photo/Yara Nardi, Reuters) 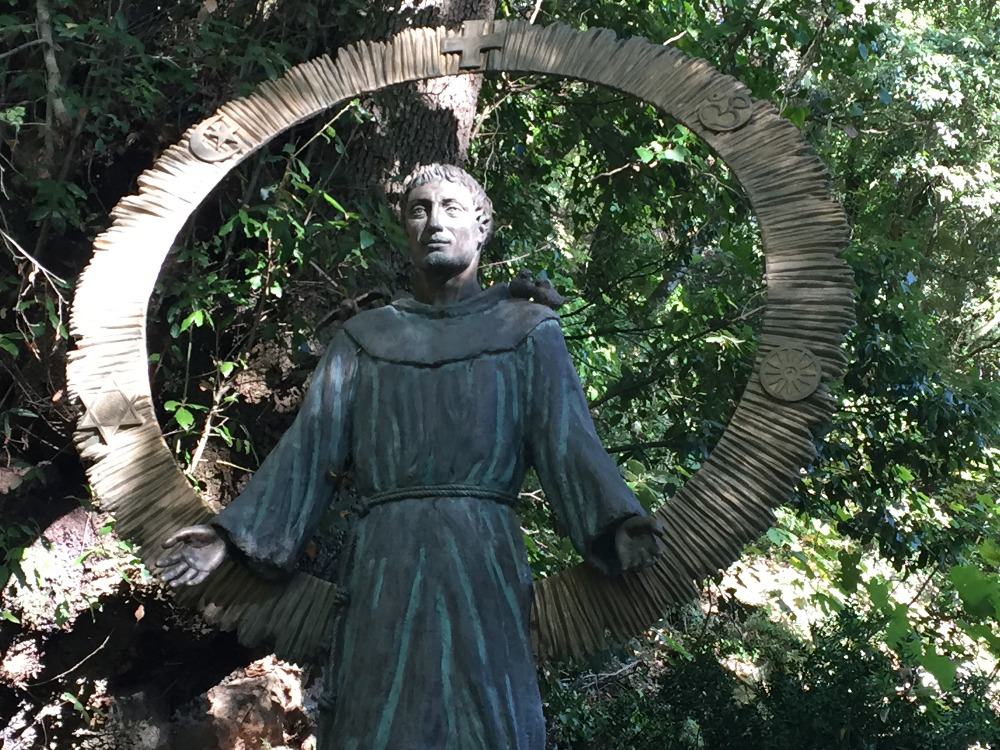 An image of St. Francis greets visitors to the hillside cloister where he prayed outside of Assisi, Italy. (Barbara Fraser)

As summer turns to autumn in the Northern Hemisphere, and winter to spring south of the Equator, we have celebrated the transitional month of September as the Season of Creation. It has been a time to take stock of our relationship with all of our fellow travelers on this planet, human and non-human alike, and renew our commitment to healing and renewing the Earth.

The Season of Creation ends, appropriately, on Sunday, which is the feast day of St. Francis of Assisi. In answer to this week's Burning Question, EarthBeat staff writer Brian Roewe explains who Francis was and how he became the patron saint of ecology.

In his 2015 encyclical, "Laudato Si', on Care for Our Common Home," Pope Francis notes that the saint from whom he took his papal name is beloved by Christians and non-Christians alike. "He was a mystic and a pilgrim who lived in simplicity and in wonderful harmony with God, with others, with nature and with himself," the pope writes. "He shows us just how inseparable the bond is between concern for nature, justice for the poor, commitment to society, and interior peace."

St. Francis has been an inspiration for countless environmental activists, especially in the decades since Earth Day in 1970 launched the modern environmental movement. This weekend is a good time to bring to mind the people who are ecological saints for our times.

How many do you know? If you gather with a faith community on the feast of St. Francis, perhaps you can take some time to share their stories, whether they are famous environmentalists or ordinary people who take extraordinary care of God's creation. This is also a time to remember the martyrs, the people around the world who have died defending their land from those who would despoil it.

One of the best known in recent times is Notre Dame de Namur Sr. Dorothy Stang, a missionary who was murdered in Brazil in 2005. The state of Pará, where she worked, remains dangerous for those who stand up to land speculators, ranchers and loggers. Photographer Paul Jeffrey recalled the commitment of Stang and others like her in his Lens on Creation series. Today's final reflection, appropriately, is sparked by a duck that appears to share St. Francis' joy in the world the Creator has given us.

Thirty days after St. Francis' feast day, U.S. voters will go to the polls to choose the president and legislators who will guide us through the turbulent months ahead, in which the coronavirus pandemic is likely to combine with the impacts of severe storms and wildfires exacerbated by global warming.

This week, EarthBeat's Roewe and biologist and science policy expert Thomas Lovejoy joined us for an NCR Facebook Live conversation about the election and environmental issues. Lovejoy, who has been studying a forested area near Manaus, Brazil, since the 1960s, has seen a cascade of factors, including road building and a warming climate, push the Amazon forest closer and closer to what he calls a "tipping point," at which it could change from forest to grassland, with disastrous impacts on rainfall around South America.

But it's not too late to act, Lovejoy told us, even if President Donald Trump should win a second term. "There is always hope," he said, "because we can use our imagination to figure out other ways to make a difference." Many cities and states are working to reduce greenhouse gas emissions, despite foot-dragging by the federal government, "and that's where I would concentrate efforts," he said.

As for individuals, there are plenty of things we can do. Voting is one, of course. Advocacy with state and local governments and even utility companies is another. And a suggestion from Lovejoy, in time for St. Francis' feast day — we can help restore what humans have destroyed.

"Every time we plant a tree or restore a wetland, get involved in a reforestation project or improve some degraded agricultural land so the soil is accumulating carbon and getting more fertile, we are making a contribution," he said. "That becomes something that every individual can do."

So this weekend, as the Season of Creation draws to a close, we can take one more opportunity to praise the Creator along with Sir Brother Sun, Sister Moon, Brother Wind, Sister Water, Brother Fire and our Sister Mother Earth, as St. Francis wrote.

And we can plant a tree, like the little boy who is working with this family to create a mangrove swamp in the Sept. 30 Lens on Creation reflection. In doing so, we are reminded that we endlessly nurture and are nurtured by all of the other human and non-human creatures in this great web of life.

What else is new on EarthBeat this week?

From time to time, EarthBeat readers ask us for tips about resources their faith groups can use to raise awareness about the climate crisis and spur action. So we'd like to ask you — what have you found most helpful and inspiring? Send your recommendations and links to earthbeat@ncronline.org, and we'll share some of them here.