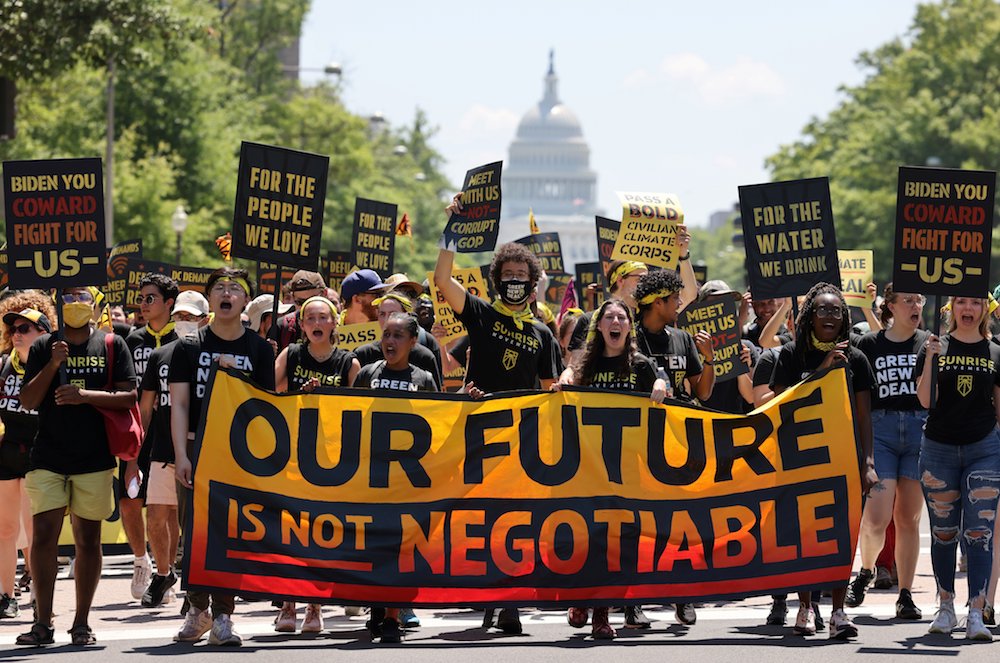 The biggest climate news this week — and perhaps this year — was the release of the new report from the scientific working group of the United Nations Intergovernmental Panel on Climate Change, which said the scientific evidence on global warming is "unequivocal" and that some of the impacts will not be reversible within hundreds or thousands of years.

Among the findings: Extreme weather events, like heavy rainfall that has caused flooding in Europe and China this summer, and record high temperatures — which already are causing droughts, as well as exacerbating wildfires in parts of Europe and the western U.S. — are a hallmark of rising global temperatures and are likely to worsen in the decades ahead.

But the report also said it's still possible to slow the warming and avert the direst impacts if substantial responses are made quickly. It added, however, that some impacts are inevitable because greenhouse gases would persist in the atmosphere even if human-caused emissions were reduced to zero tomorrow.

In the wake of the report's release, NCR environment correspondent Brian Roewe wrote that although the report's outlook is foreboding, religious leaders — echoing Pope Francis — call for hope that leads to action. Measures like reducing pollution from fossil fuel use, upgrading infrastructure and providing access to electricity for all would improve the quality of life of many marginalized communities, they say, adding that faith communities have a key role to play in shaping a better future.

In doing so, they must allow young people to take the lead with their climate actions, said other leaders interviewed by Dennis Sadowski at Catholic News Service.

Writing for Religion News Service, Jesuit Fr. Thomas Reese noted that Pope Francis' 2015 encyclical "Laudato Si', on Care for Our Common Home" reflects the climate science outlined with increasing urgency by the IPCC. He added that it's time for the U.S. bishops to take that message more seriously.

The IPCC report's timing is critical, as it comes less than three months before the U.N. climate summit known as COP26, which is scheduled for Nov. 1-12 in Glasgow, Scotland. Its 40-odd-page summary for policymakers condenses the science into clear bullet points, accompanied by graphs, illustrations and brief explanations.

That summary was approved by delegates from all countries that are parties to the 2015 Paris Agreement, and it will serve as the basis for November's COP26 negotiations in Glasgow.

Nevertheless, some caveats are in order. Under the Paris Agreement, the aim is to keep the planet from warming by more than 1.5 degrees Celsius above pre-industrial temperatures, but all of the scenarios project that warming will exceed that level within the next 10 to 20 years.

In the most optimistic forecasts, where emissions are drastically reduced, the overshoot would be temporary, but even they depend on the removal of carbon dioxide from the atmosphere using technology that has not yet been fully developed and tested. And that worries many observers, including members of another IPCC working group.

According to information leaked to a Spanish publication, the working group drafting a report on how to mitigate impacts of climate change, due for release in early 2020, says greenhouse gas emissions must peak within the next four years. That would mean shuttering both coal- and gas-fired power plants by the end of this decade and making significant behavioral changes in wealthy countries, which have the most energy-intensive lifestyles and consume most of the planet's resources.

Fiona Harvey and Giles Tremlett at The Guardian summarize the leaked content, but if you read Spanish, it's worth looking at the original article by Juan Bordera and Fernando Prieta on the CTXT website. Harvey and Tremlett report that the IPCC declined to comment on the text, but a spokesman said the leaked content was from an earlier draft that has changed substantially.

One of the points that Bordera and Prieta make is that the worst impacts of climate change cannot be avoided as long as social and economic welfare are tied to constant growth based on overconsumption of resources. They note that European Union agencies have been discussing the concept of "degrowth," which Alex Mikulich also explained in a recent essay for EarthBeat.

We'll have more about degrowth during the Season of Creation, which begins Sept. 1 and continues through the Oct. 4 Feast of St. Francis of Assisi, the patron saint of ecology. And we'll be delving into other issues raised by the IPCC report in the weeks ahead, as the COP26 climate summit approaches.

We'll also continue looking at steps that individuals, parishes, dioceses and other religious institutions are taking to reduce their greenhouse gas emissions, including those related to the Laudato Si' Action Platform.

If there are particular issues you'd like us to examine in greater detail, please let us know at earthbeat@ncronline.org.

Beginning Aug. 17, Waterspirit will offer "Meditation for Earth" at 12:15 p.m. Eastern Time every Tuesday through the end of the year.

Also on Aug. 17, the Florida-based DART Center and a group of Catholic dioceses and organizations will present a virtual Care for Creation Laudato Si' Workshop — in English, Spanish and Haitian Kreyol — from 7 p.m. to 8:30 p.m. Eastern Time.

You can find more information about these and other upcoming events on the EarthBeat Events page. And you can submit your own organization's event here.

These next few months will be a busy time for climate activists and faith leaders as the COP26 climate summit approaches.

On EarthBeat, we'll be marking the Season of Creation with reflections, publishing stories in preparation for the climate summit, and covering the summit itself. And you can follow Brian Roewe on Twitter (@BrianRoewe) to keep up with Catholic climate news.