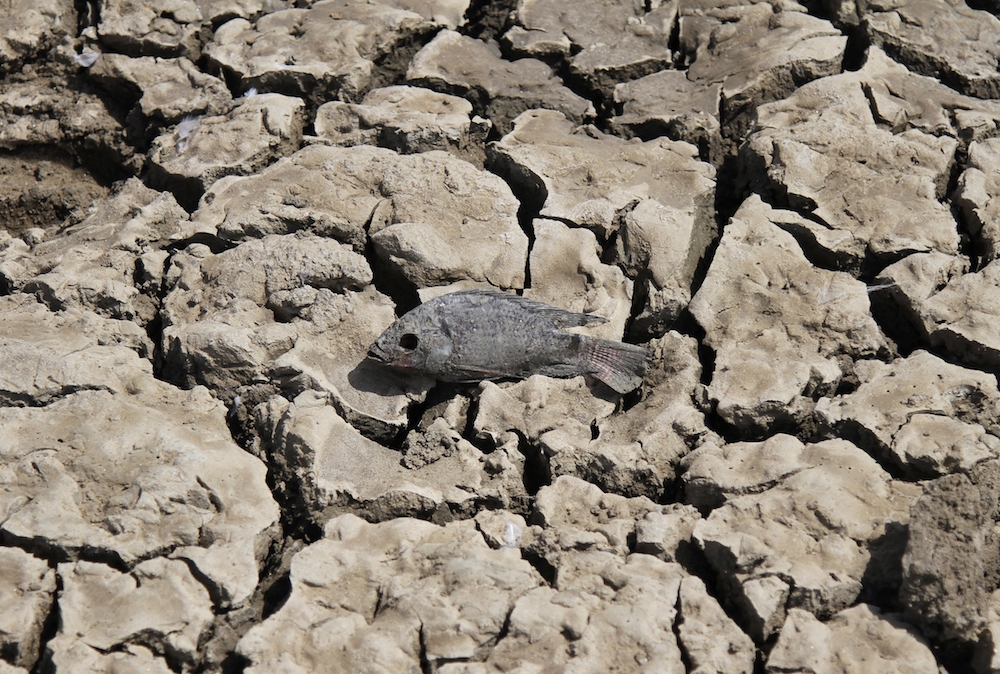 A dead fish lies on the partially dried-up bed of Choursiyavas Lake near Ajmer, India, in June. Rising temperatures due to climate change are likely to reduce and shift the habitable regions of the planet. (CNS photo/Himanshu Sharma, Reuters)

There's no question that humans have adapted to live in some pretty extreme environments.

A few years ago, I visited an archaeological site 14,700 feet high in the Andes Mountains where people lived some 12,000 years ago. That's nearly three miles up! And it's still one of the earliest known sites of human habitation that high, in a rock shelter well above the tree line.

Some time earlier, I'd stood on the beach on an island off the southern tip of South America, where ancient inhabitants dove into the frigid water to gather shellfish, with only a layer of seal fat smeared on their skin for protection. I contemplated that while bundled against a freezing wind, watching chunks of ice floating in the bay.

And of course even today there are communities of original peoples in the Arctic and desert dwellers in the Sahara. But a recent study of human habitation over the past six millennia found that for the most part, we've settled into places on the globe where the average temperature lies mainly in the 50s degrees Fahrenheit range — between 11 and 15 degrees Celsius.

That seems to be the optimal temperature range for people, their crops, their livestock and even non-agricultural economic activity. And temperature, even more than precipitation, appears to be most decisive in this pattern of population concentration.

So what will happen as temperatures rise with a changing climate?

The authors of the study, which was published in May by the Proceedings of the National Academy of Sciences in the U.S., point out that the "Goldilocks" zone — not too hot, not too cold — will shrink and shift toward the poles — northward in the northern hemisphere, and southward in the southern, until it nearly disappears altogether.

Parts of the world that are now densely inhabited, where the average temperature is around 55 F, will find the average rising to about 68 F. Although that is still comfortable for humans, it is a radical change for some crops — as coffee farmers in Central America are already finding. And "average" means some days will see far higher temperature spikes.

The areas with the highest temperatures are also the places where the greatest population growth is predicted, so more people will be living in places that already test the limits of human endurance and agricultural production.

Under the "business-as-usual" scenario, without substantial reduction of greenhouse gas emissions, the authors estimate that by 2070, some 3.5 billion people would be left out of the "geographical niche" of that optimal temperature where humans have chosen to settle for millennia. With mitigation efforts to reduce emissions, that could be reduced to about 1.5 billion, they say.

Will those people be able to adapt to the higher temperatures where they live, or will they migrate toward cooler areas? What would the consequences be for livelihoods and food supplies, among other things?

The authors of the study recognize that human migration is the result of many factors, but the potential ferocity of temperature increases and a shrinking, shifting area ideal for human habitation on the planet should give us plenty of reason to take seriously the call for net-zero emissions — the point at which no more human-caused emissions accumulate in the atmosphere — as soon as possible.

The 26th U.N. climate summit was to have started this week, but was postponed until November 2021 because of the coronavirus pandemic. I spoke this week with various advocates who said clearly that the urgent task of implementing — and working toward — stricter emission-reduction targets cannot wait another year.

They highlighted priorities for this "gap year" until the next summit — more ambitious emissions-reduction targets by 2030, and more financing and technical assistance to help lower-income countries (many of them in that already-warming belt, or threatened by rising sea level) convert from fossil fuels to renewable energy and adapt to the changes.

What could rising temperatures mean for population movement in the United States? At ProPublica, they've created a series of animated maps that provide a sobering, graphic overview of the shrinking, shifting comfort zone. Lucas Waldron and Abrahm Lustgarten note that people are still moving to cities in the areas that are expected to become least habitable. That is unlikely to be sustainable.

"Ultimately, millions of people will be displaced by flooding, fires and scorching heat, a resorting of the map not seen since the Dust Bowl of the 1930s," they write. "Now as then, the biggest question will be who escapes and who is left behind."

What would a just global economy, rooted in integral ecology and responsive to the cry of the earth and the cry of the poor, look like? The Vatican is bringing together young people and economists to explore that question from various angles from Nov. 19-21. The event, originally scheduled to be held in Assisi, Italy, St. Francis' birthplace, has gone online, and parts will be livestreamed.

For more information about this and other events, see our Upcoming Events page.

What are you wondering about climate science or the ways in which people are responding to the changes that lie ahead for our planet and its inhabitants? What would you like to know about the spirituality that sustains those working for policy change and environmental justice? Send us your Burning Question, and we'll find the answers.