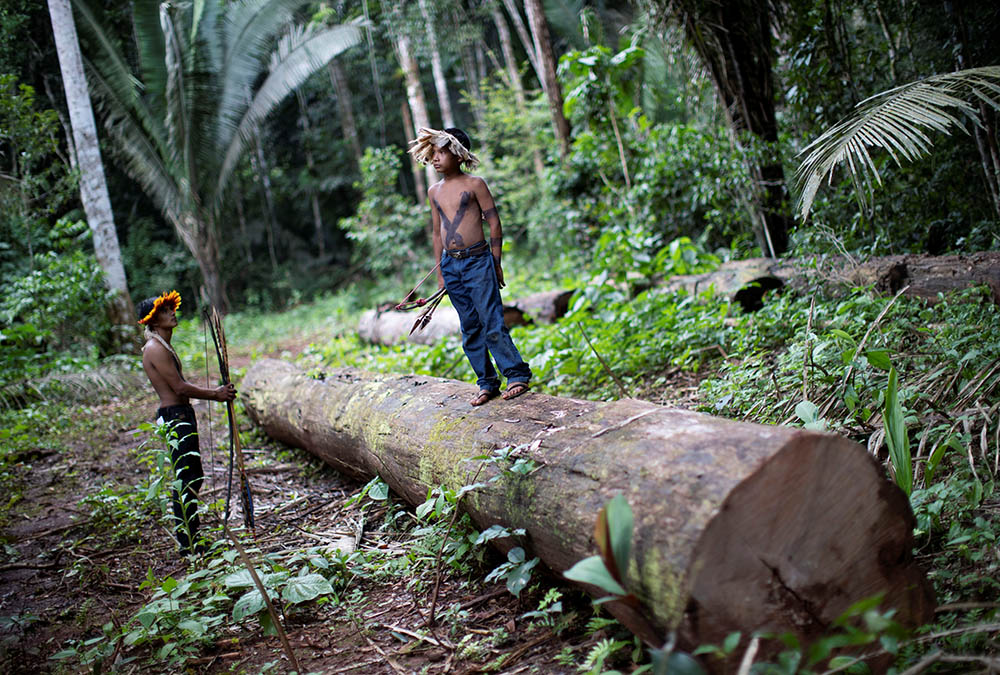 An Indigenous man and child of the Uru-eu-wau-wau tribe are pictured in a 2019 photo inspecting an area deforested by invaders on Indigenous land near Campo Novo de Rondônia, Brazil. (CNS/Reuters/Ueslei Marcelino)

Catholic investors are pressuring the Brazilian government to strengthen protection of the Amazon, saying that the deforestation and fires in recent years endanger ecosystems and the Indigenous people who depend on them.

Meanwhile, church groups working for environmental and Indigenous rights in the South American country are warning that any U.S. policies aimed at protecting the Amazon must provide for the participation of Indigenous peoples and other local communities. They plan to express their concerns at a virtual Amazon climate forum on April 15, which will include church leaders and Indigenous leaders from South America, as well as scientists and U.S. legislators.

The event comes two weeks after Catholic investors in Europe and the United States sent a letter to Brazilian President Jair Bolsonaro, urging him to protect the Amazon — at more than 2 million square miles, an area seven times the size of Texas — and the people living in it.

The March 29 letter was organized by the Catholic Bank für Kirche und Caritas in Germany, along with the Brazilian bishops' Commission on Integral Ecology and Mining and the Global Catholic Climate Movement. It was signed by more than 90 Catholic organizations and congregations in at least 17 countries.

"As Catholics and citizens of this world, we are extremely concerned about the ongoing destruction of the Amazon forest," they wrote, citing extensive fires in the Amazon Basin and the Pantanal wetlands in recent years and the deforestation of an area larger than Jamaica between August 2019 and July 2020.

Those trends and threats against local communities run counter to Pope Francis' calls to protect the environment, address global warming and defend the rights of Indigenous peoples, the letter said.

"We would like to motivate the Brazilian government to finally respect human and environmental rights and take appropriate countermeasures to remedy the current situation. We are convinced that as a 'Catholic voice' we can make a helpful contribution to the discussion of the protection of the Amazon rainforest and the indigenous population," Tommy Piemonte, head of sustainable investment research at the German bank, told EarthBeat in an email.

The Catholic groups are adding their voices to those of other investors who are beginning to shy away from Brazilian companies whose activities are related to deforestation, because they see biodiversity loss and climate change as risks to their investments, Piemonte said.

The investors called for the Brazilian government to implement and strictly enforce environmental legislation, implement and adequately fund a plan to combat deforestation, and "massively increase" funding for firefighters and for the work of the country's environmental protection agency.

They also demanded that the government stop harassing and begin dialogue with nonprofit environmental groups, protect the territories and rights of Indigenous peoples, restore land taken illegally from Indigenous and other local communities, and undertake reforestation, providing annual progress reports. 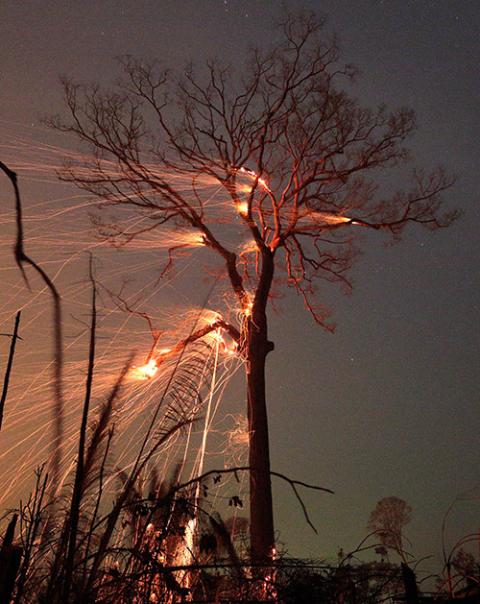 A section of the Amazon jungle burns as it is cleared by farmers in Rio Pardo, Brazil, Sept. 15, 2020. (CNS/Reuters/Ricardo Moraes)

"We are deeply concerned about the record deforestation taking place in Brazil and its deleterious impact not only on global climate, but also on our indigenous brothers and sisters who are being deprived of their ancient home and livelihood," Adrian Dominican Sr. Elise Garcia, whose community signed the letter, wrote in an email to EarthBeat.

"Our 2004 Vision calls us 'to challenge heresies of local and global domination, exploitation and greed that privilege some, dehumanize others, and ravage Earth.' The destruction of the Amazon and ravaging of all her inhabitants for the financial gain of a few is a heresy that cries out for justice," she wrote.

According to Igor Bastos, the Global Catholic Climate Movement's program manager in Brazil, the official government response has only been to acknowledge receipt of the letter. But because efforts by others have often been met with silence, Piemonte hopes that reply will be a first step toward dialogue. Still, a complicating factor may be the continued criticism by some Brazilian bishops of Bolsonaro's handling of the coronavirus pandemic, with several joining calls for his impeachment.

The letter comes just ahead of a virtual international climate summit April 22 and 23, at which President Joe Biden is expected to host 40 world leaders, including Bolsonaro.

The Biden administration has pledged $20 billion to protect Amazonian forests.  A group calling themselves Climate Principals — composed of former officials of the U.S. State Department, Interior Department and U.S. Environmental Protection Agency — has drafted a series of recommendations that are likely to form the basis of U.S. efforts.

The recommendations include various mechanisms for public and private financing of incentives to reduce deforestation, including debt-for-climate swaps, and earmarking 25% of U.S. international climate finance to "support forests and other natural climate solutions across the globe, particularly in the Amazon."

They also propose stronger measures to avoid the importation of agricultural products grown on illegally deforested land and requirements for companies to report on deforestation in their supply chains. Diplomacy is a key point on their agenda, with proposals for negotiating incentives and safeguards for forest protection.

Territorial rights of Amazonian Indigenous peoples are mentioned only once in the Amazon Protection Plan, when it calls for U.S. assistance for "strengthening land tenure and the rights of indigenous peoples." The same section calls for "providing forest-friendly economic development opportunities" and "implementing rural sustainable development strategies."

The idea that the U.S. could use international development aid to pressure Bolsonaro on Amazonian issues raises red flags for church workers involved in environmental and indigenous rights in Brazil.

According to Comboni Fr. Dario Bossi of the Churches and Mining Network in Brazil, top U.S. officials are already meeting with officials of the Brazilian ministries of Justice and Environment, but information about the talks has not been made public.

"For us, it's very dangerous to invest in international cooperation with a government that, so criminally over the past two years, has demonstrated a policy opposed to the life plans of the Amazonian people," Bossi told EarthBeat.

Bolsonaro's Amazonian policy "has promoted economically predatory plans for the Amazon, the expansion of large-scale agriculture and mining. Violence has increased greatly, along with the destruction of the Amazon forest," Bossi said.

"It is very strange to us that [the U.S.] would reach a possible agreement with Brazil under these conditions," he added. "Our main concern is that they can't make plans for the Amazon without consulting and without the protagonism of Indigenous peoples."

Related: Environmental justice award winner: 'We have the right to live in a territory that for us is sacred'

Because the majority of the Amazon Basin is in Brazil, deforestation there affects all the Amazonian countries, Patricia Gualinga, a Kichwa Indigenous leader from Sarayaku, in the Ecuadorian Amazon, told EarthBeat. Like Bossi, she participated in the Synod for the Amazon held at the Vatican in 2019.

While she welcomed the pressure from Catholic investors and also from the U.S. government, especially because the Biden administration includes a highly placed Native American, Interior Secretary Deb Haaland, Gualinga cautioned that the implementation of any plans must be consulted and coordinated with forest-dwelling local communities.

She said she hoped that participants in the U.S. climate summit "will take into account that this ecosystem is vital for humanity, along with the people living there, and that they start to see the Amazon as something that is important, and not just an economic source for extraction."

Gualinga added, "That doesn't mean that they appropriate the Amazon, but that they respect it as it is, and that they don't promote extractive activities that are not compatible with the ecosystems, that they don't affect the rights of indigenous peoples."