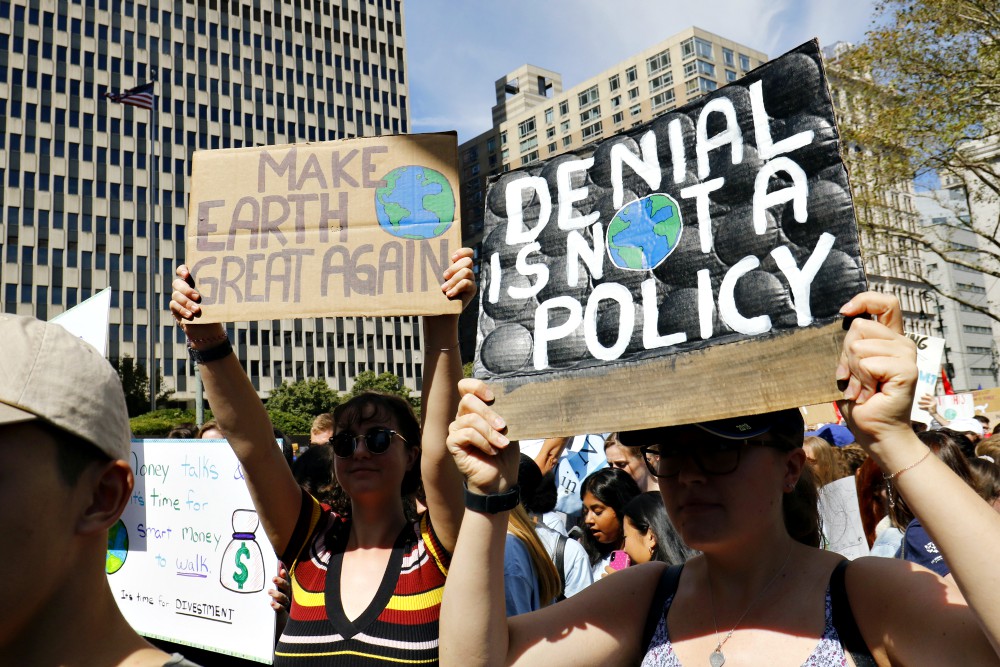 Catholic organizations were quick to condemn the Trump administration as it formally began the process to withdraw the United States from the Paris Agreement on climate change, calling the move "unconscionable" and one that poses "far reaching and disastrous consequences for life on our planet as we know it."

The step, announced by Secretary of State Mike Pompeo Nov. 4, was widely expected. Under the agreement's provisions, Nov. 4 was the first day that any nation could officially begin the exit process. Acting on a campaign promise, President Donald Trump announced June 1, 2017, that he would pull the nation from the global deal to address climate change at the earliest possible date.

Withdrawal takes effect one year after notification, meaning the U.S. is set to leave the agreement on Nov. 4, 2020, or a day after the 2020 presidential election.

That would position the U.S. as the only nation in the world outside the Paris Agreement.

The Leadership Conference of Women Religious said it was "profoundly troubled" by the White House's move, adding, "The failure of the United States to fulfill its 2015 commitment will dishonor our nation and threaten our common home."

"Catholic teaching is clear: climate change is a grave moral issue that threatens our commitment to protect human life and dignity; to exercise a preferential option for the most vulnerable; to promote the common good; and to care for God's creation," St. Joseph Sr. Carol Zinn, LCWR executive director, said in a statement.

Catholic Relief Services, the U.S. bishops' international aid agency, said it "strongly opposes" the U.S. exiting the Paris accord, calling it "a concrete pledge affirming the shared responsibility to care for the planet." It urged the country to rejoin as soon as possible.

"The U.S. must not turn its back on the rest of the world at a time when urgent action is needed," said Bill O'Keefe, an executive vice president with Catholic Relief Services.

With the Paris Agreement, reached in 2015 at the COP21 United Nations climate summit, 195 countries agreed to reduce their national greenhouse gas emissions toward limiting average global temperature rise "well below" 2 degrees Celsius (3.6 degrees Fahrenheit) and as low as 1.5 C (2.7 F).

Climate scientists have identified 1.5 C as the threshold where the most severe impacts of climate change — including rising sea levels, longer droughts and more powerful storms — become irreversible. Already, the planet has warmed 1 C and is on pace to warm 3 C by the end of the century under current national emissions reduction plans.

The threat of climate change has raised concern among Catholics worldwide, including at the Vatican under the past three popes. That's due in large part because threats to life posed by a warming world are often experienced first and most severely by the poor and vulnerable, despite these people contributing little to the problem.

Pope Francis in his 2015 encyclical "Laudato Si', on Care for Our Common Home" urged all people of goodwill to hear "the cry of the earth and the cry of the poor" — what has become a refrain for many Catholics who join the pope in calling for action to address what they have deemed a climate crisis.

Francis has offered the full support of the Holy See to the Paris Agreement, even timing the release of Laudato Si' in hopes of it influencing the climate negotiations in Paris. Next year will mark the fifth anniversary of both documents.

In late October, bishops at the Vatican synod for the Amazon called climate change "above all" the greatest socio-environmental threat to life in the biologically rich ecosystem, noting its critical role in absorbing carbon dioxide emissions.

In statements denouncing the move by the Trump administration, numerous Catholic organizations described how their ministries have witnessed the impacts of climate change around the world. That has included increasing droughts in Central America, East Africa and Pakistan; extreme flooding in Iowa and Peru; more powerful storms in Asia, Pacific islands and the Caribbean; and wildfires in California, Indonesia and the Amazon rainforest.

"These climate-related events are exacerbating hunger, conflict and global migration," said the Maryknoll Office for Global Concerns, which represents the worldwide network of Maryknoll sisters, fathers, brothers and missioners. It said Maryknollers were "profoundly saddened" by the U.S.'s formal step toward a Paris Agreement exit.

"As the largest historical emitter of greenhouse gases, it is unconscionable that the United States is pulling back from the Paris agreement and rolling back other climate policies meant to protect our common home and the communities hit first and worst by climate change," the Maryknoll Office said.

Scott Wright, director of the Columban Center for Advocacy and Outreach, said, "Our moral obligation to eliminate greenhouse gas emissions that cause climate change is the same as our obligation to be our sisters' and brothers' keeper," citing passages from the Book of Genesis.

He called on Congress to make "meaningful climate commitments." So, too, did the Sisters of Mercy of the Americas call on Congress to uphold the U.S. role in responding to climate change.

"Scientists now tell us that we need much bolder and urgent actions, and within a much tighter timeline, than was clear in 2015," said Mercy president Sr. Patricia McDermott. "That demands much greater engagement and accountability by governments around the world, not less."

The Franciscan Action Network said the step toward a Paris Agreement exit represented an abdication by Trump of U.S. leadership on the global stage.

"He would rather be in isolation than in collaboration with the entire world. This is a selfish, partisan maneuver that will have far reaching and disastrous consequences for life on our planet as we know it," said Patrick Carolan, Franciscan Action Network's executive director.

The Rev. Susan Hendershot, president of Interfaith Power & Light, said it was a "grave injustice" for the U.S. to abandon the Paris Agreement, which represented the global community's intention "to respond to this existential crisis with the seriousness that is desperately needed."

"Regardless of this reckless action, faith communities continue to signal that we are Still In, and working to meet the goals of the Paris accord," she said.

Following Trump's signal two years ago to leave the Paris Agreement, faith communities joined a coalition of states, cities, businesses and health care organizations that pledged to keep the U.S. "still in" the Paris Agreement. They committed to working toward fulfilling the initial U.S. pledge under the deal: reducing emissions 26-28% from 2005 levels by 2025.

Nearly 800 Catholic dioceses, universities, parishes, organizations and health care systems have joined the We Are Still In pledge.

The next U.N. climate summit, COP25, will open next month in Madrid. The Spanish capital represents the third locale for the annual meeting; last week, Chile, facing political turmoil and protests, canceled its hosting plans. Chile had offered to hold the international event last year after neighboring Brazil, under newly elected president Jair Bolsonaro, backed out on its own offer to host.