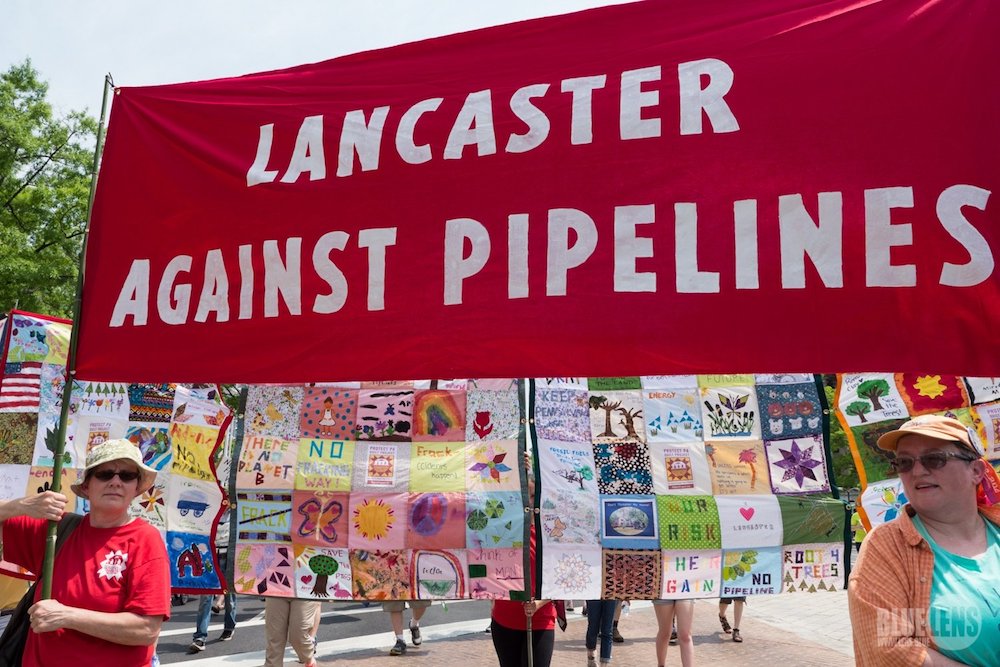 Activists with Lancaster Against Pipelines carry a banner during a 2017 climate march in Washington. A federal court judge has dismissed a lawsuit filed by the Adorers of the Blood of Christ, a religious order that has been challenging construction of a natural gas transmission line through its Pennsylvania property. (CNS photo/Mark Dixon, Wikimedia Commons)

A religious order that has been challenging construction of a natural gas transmission line through its Pennsylvania property for years expressed disappointment that a federal court judge dismissed their lawsuit, which was rooted in religious freedom claims.

Attorney Dwight Yoder, representing the Adorers of the Blood of Christ, said the dismissal of the lawsuit by U.S. District Judge Jeffrey Schmehl was not surprising, given the judge's similar decisions in earlier claims against construction the Atlantic Sunrise pipeline and its builder, Transcontinental Gas Pipe Line Co.

The lawsuit filed in the U.S. District Court for the Eastern District of Pennsylvania in Reading was grounded in the Religious Freedom Restoration Act, or RFRA. The Adorers had sought a trial to present evidence about the practice of their faith and their belief that as Christians they are called to protect creation from desecration and to seek damages from the company.

"The courts have consistently sided with the fossil fuel companies in these decisions, and we respectfully disagree with the judge," Yoder told Catholic News Service Oct. 1, the morning following Schmehl's ruling.

"We think the Religious Freedom Restoration Act was adopted by Congress and Congress gave specific instructions. It's supposed to trump and preempt other federal laws," Yoder said. "Congress instructed the judiciary to apply that law to protect religious liberty. In this case that's not what's happening here. They're protecting fossil fuel companies. We disagree with the court's analysis."

The congregation said in a statement posted on its website Oct. 1 that it was disappointed with the ruling, "but not entirely surprised."

The religious order chastised the pipeline company, known as Transco, for disregarding the sisters' religious beliefs despite being aware of the faith-based objections before seeking approval for the project from the Federal Energy Regulatory Commission, which oversees energy infrastructure.

"The federal courts consistently protect the profit interests of the fossil fuel industry at the expense of religious liberties and property rights," the Adorers said.

In the lawsuit filed in November 2020, the Adorers challenged the work by Transco, a subsidiary of pipeline giant Williams. The lawsuit argued the order's religious beliefs were violated by the Transco's use of eminent domain to seize the congregation's property in Lancaster County, Pennsylvania, to construct a section of the Atlantic Sunrise project.

The $3 billion, 183-mile pipeline delivers natural gas from the Marcellus shale geological formations in northeast Pennsylvania to distribution lines along the East Coast.

Transco asked that the lawsuit be dismissed soon after it was filed. The parties presented arguments supporting their stances during a hearing on the motion before Schmehl earlier this year.

Schmehl presided over the order's first federal lawsuit filed in 2017, which also raised RFRA claims about the pipeline's construction under property used as farmland adjacent to a nursing home the sisters operate in Columbia, Pennsylvania. Schmehl dismissed that lawsuit on procedural grounds and the ruling was upheld by a federal appeals court.

The U.S. Supreme Court in February 2019 declined to hear arguments in the case.

But the appeals court left open the door for the most recent lawsuit. The court said the Adorers could initiate a claim for damages under RFRA provisions that intersect with provisions under the Natural Gas Act, which governs aspects of pipeline construction nationwide.

Yoder told CNS that he and the Adorers' leadership are reviewing the ruling and may find another way to challenge the pipeline's existence.

"We know the deck is stacked against us. It always has been," he said. "But it doesn't mean we're not going to try."