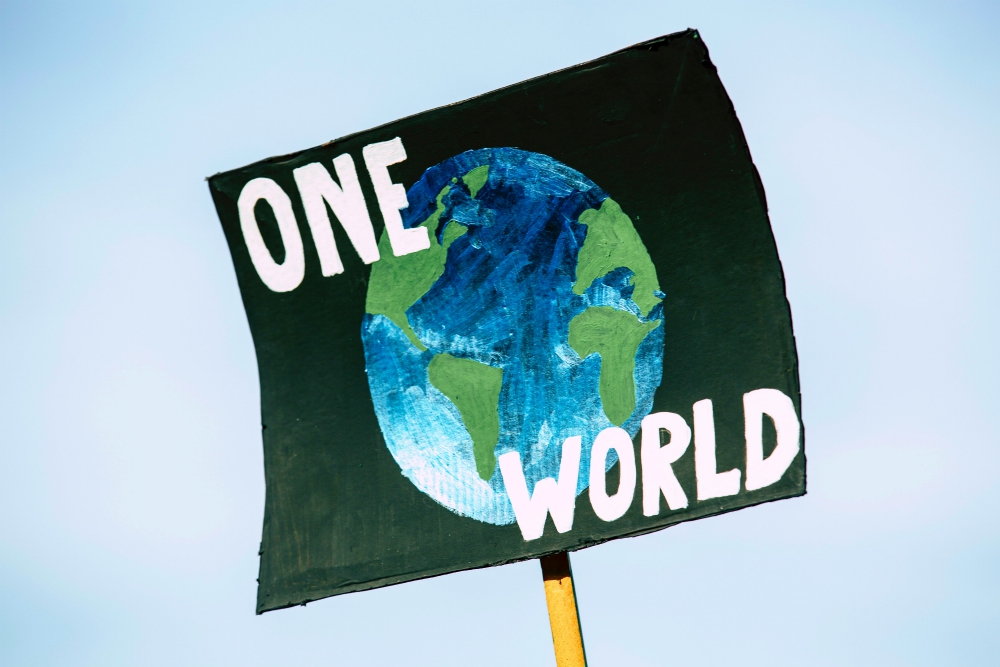 Last September, I wrote a column in which I argued that "climate change is the most important life issue today." Since reading Pope Francis' latest apostolic exhortation, Querida Amazonia, which was published Feb. 12, I have been thinking of that column and the arguments I proposed in it.

In brief, I insisted that the rising global climate catastrophe is the most important life issue because it is uniquely threatening to every kind of life on the planet. Defense of the unborn, the infirmed, the disabled, marginalized communities, or anybody else is pointless if the very condition of the possibility for life at all is destroyed!

At the time, some people reacted strongly to my point, claiming that in the United States' context the most important life issue ought to be abortion and that topic alone. Those who espouse such a myopic view of what constitutes a "pro-life position" might have also felt emboldened two months later by the U.S. bishops' conference's similarly shortsighted inclusion of the descriptor "preeminent" to describe the church's anti-abortion stance during discussions around the bishops' voter's guide.

And it is my guess that the same group of people are not particularly interested in hearing what Francis had to say following the Synod of Bishops for the Amazon, especially since their subject of choice doesn't make an appearance.

But Querida Amazonia is a deeply pro-life text. Among other topics, it builds on the central theme of Francis' 2015 encyclical letter, "Laudato Si', on Care for Our Common Home," which is the notion of "integral ecology."

Francis states this clearly in the opening of his recent exhortation: "I wish merely to propose a brief framework for reflection that can apply concretely to the life of the Amazon region a synthesis of some of the larger concerns that I have expressed in earlier documents, and that can help guide us to a harmonious, creative and fruitful reception of the entire synodal process."

He explains that he is "addressing the present Exhortation to the whole world," because what is seen in the pan-Amazon region is illustrative for what already is or will be experienced across the globe.

Returning to Laudato Si', we see how the notion of integral ecology governs the internal logic of this magisterial teaching. While a full exploration of the concept and its implications surfaces in the fourth of six major chapters of the encyclical, the theme of "everything is connected" appears at the outset and is echoed throughout. The pope critiques the tendency many Christians have to compartmentalize their faith and moral imaginations, arbitrarily separating themselves and their personal interests from those of the broader human and nonhuman communities.

In response, Francis makes a holistic argument about integral ecology, adverting to the Catholic truism of "both/and" reasoning, stating: "Since everything is closely interrelated, and today's problems call for a vision capable of taking into account every aspect of the global crisis, I suggest that we now consider some elements of an integral ecology, one which clearly respects its human and social dimensions."

Given that Laudato Si' is officially part of the church's social teaching, its insights and lessons have bearing on how we view social order, politics, scientific inquiry, theological reflection and moral norms. To talk about an integral ecology in this light is to reiterate the interconnectedness of all human persons to one another and our inextricable place within a singular cosmic web of creation.

It cannot be emphasized enough how everything is interconnected. Time and space are not independent of one another, and not even atoms or subatomic particles can be considered in isolation. Just as the different aspects of the planet — physical, chemical and biological — are interrelated, so too living species are part of a network which we will never fully explore and understand. A good part of our genetic code is shared by many living beings. It follows that the fragmentation of knowledge and the isolation of bits of information can actually become a form of ignorance, unless they are integrated into a broader vision of reality.

A true sense of interconnectedness suggests that one cannot merely select a single ethical issue in isolation as if it were unrelated to all others. For instance, to focus on abortion in isolation, calling it the "preeminent" issue, does not adequately reflect the church's teaching on an integral ecological approach. Such approaches reject the church's call for a "broader vision of reality." As insidious and horrifying as some particular threats to human life are, such sins and crimes against humanity always already exist within a broader context that must also be considered.

As I outlined last September, narrowly defined defenses against this or that part of the human population are futile if there is no habitable planet — "our common home" — on which such lives can flourish. The global climate catastrophe we face today, caused and exacerbated by human activity, is the most pressing life issue because it threatens not just one vulnerable or marginalized part of humanity, but it threatens the life of all human and nonhuman creatures.

In light of the church's teaching on integral ecology and the inherent dignity and value of all life, I believe it worthwhile to return to a principle made popular by the late Chicago Cardinal Joseph Bernardin — namely, the "consistent ethic of life."

Bernardin used this term in his now-famous 1983 lecture on the topic at Fordham University, stating, "I am convinced that the pro-life position of the Church must be developed in terms of a comprehensive and consistent ethic of life."

The context in which Bernardin articulated this call was the threat of nuclear annihilation, commenting as he did on the then-recently published pastoral letter from the U.S. bishops' conference titled "The Challenge of Peace."

Just three months after delivering his lecture at Fordham, he spoke at St. Louis University and described the "seamless garment" metaphor, borrowing the image from the Passion narrative about Jesus' cloak that was not divided and for which the guards cast lots. Like that garment, a Catholic pro-life ethic must be envisioned as a singular whole, constituted by all the particular issues that threaten life, but grounded in something more fundamental and consistent.

While nuclear annihilation sadly remains a real possibility, there exists today an even greater threat to all life and it is the active destruction of this planet.

When Bernardin spoke in the 1980s about the seamless garment approach to Catholic moral theology, recognizing the necessity of a consistent ethic of life, the primary emphasis was on the universal value and dignity of human life. It was certainly a comprehensive approach, one that improved on the à la carte style of most "pro-lifers" who pick and choose their issue of choice. However, it did not focus attention on the more fundamental life issue that we recognize today in terms of "our common home."

Today, with Laudato Sí' and Querida Amazonia added to the universal teaching of the church, we have an opportunity to enlarge the seamless garment, redesigning it to accommodate the full panoply of life issues connected to each other as understood according to an "integral ecology." Not only does "pro-life" mean embracing the seamless garment, but it also requires that our concern for and protection of life be shaped by an integral ecology, which recognizes that "everything is connected" and nothing is meant to be treated in isolation.