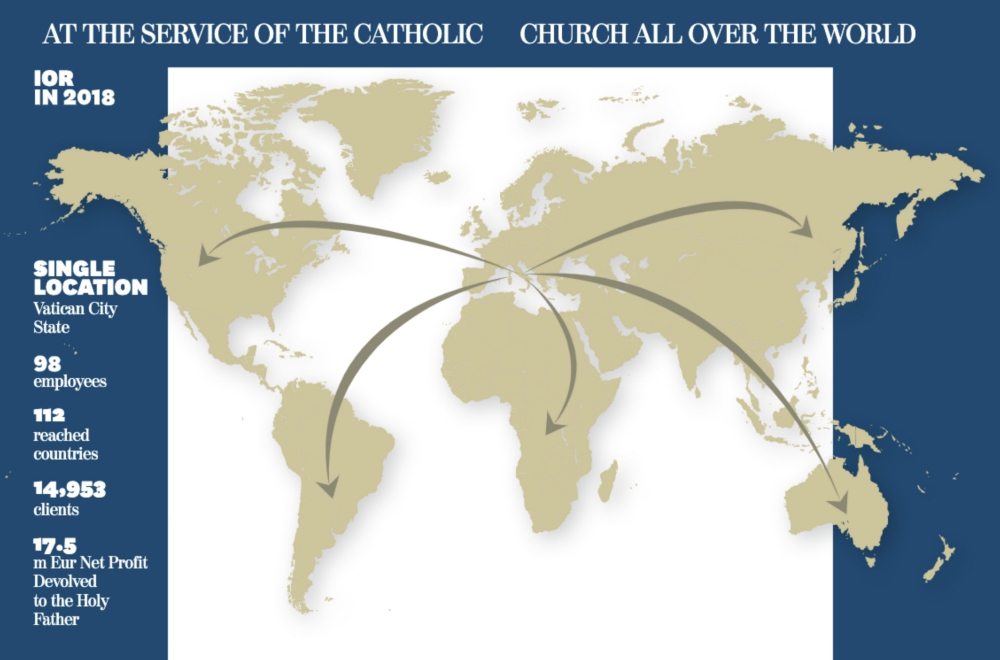 An illustration from the Vatican Bank's 2018 annual report (EarthBeat screengrab)

The Institute for the Works of Religion, commonly referred to as the "Vatican bank" or by its Italian acronym IOR, does not release information about its individual investments.

Analysts who follow Vatican financial matters say, however, that it is unlikely the institute is invested in the fossil fuel sector, following the traditionally conservative practice of European financial institutions to eschew investments in public equities in favor of safer treasury instruments.

Max Hohenberg, who served as a communications official at the institute from 2013 until 2015, told NCR that at the time of his employment with the organization it had no exposure to the fossil fuels sector.

Hohenberg said the lack of such exposure was primarily due to two reasons: that the institute does not finance corporations as other banks do, and does not invest in single stocks or bonds but government securities.

"Whether in the meantime the IOR has introduced a specific policy in this regard I don't know — in practice it would not make a difference but it could be a welcomed signal," he said.

The institute has been the center of various financial scandals in the past. It has been the subject of significant reform efforts under the papacies of Benedict XVI and Francis.

Its main purpose, outlined in new statutes approved by Francis in August 2019, is to provide a banking structure for legal entities recognized by the Vatican City State. These entities often include religious orders based in countries with unstable economic systems, which would otherwise have few options for reliable banking services.

In his note accompanying the report, Gian Franco Mammi, the institute's director general, said it seeks to make investments "in line with the Social Doctrine of the Catholic Church" and has "expressed its commitment to contribute to the 'care of the common home,' " as stressed by Francis in his 2015 encyclical "Laudato Si', on Care for Our Common Home." The IOR also released a statement in 2018 headlined "Investments consistent with the Catholic Faith."