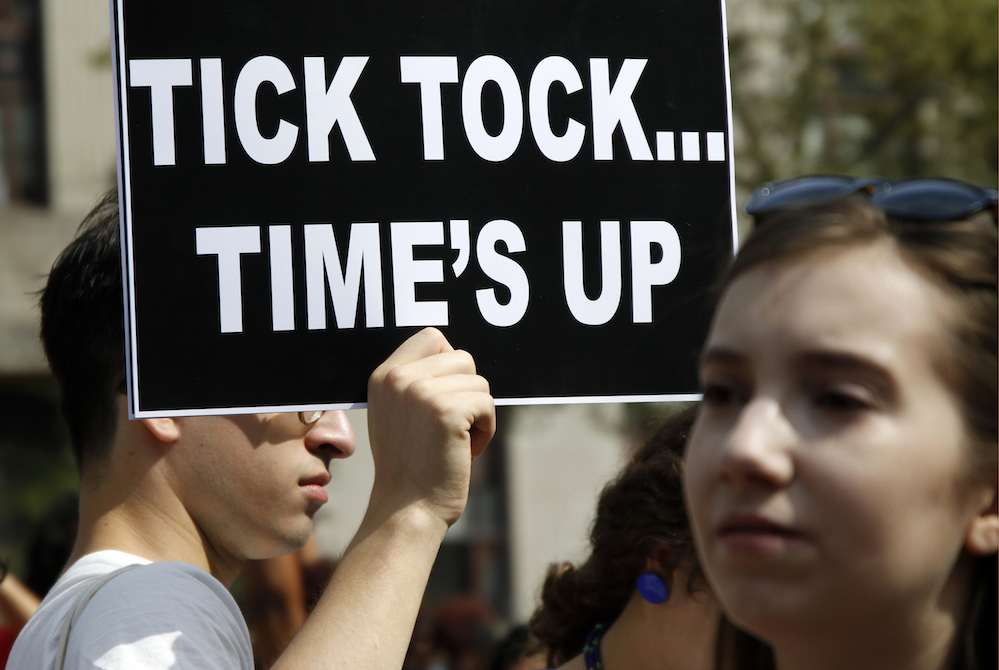 A young person holds a sign while participating in the Global Climate Strike in New York City Sept. 20. The youth-led march and rally was one of many demonstrations held around the world urging government and business leaders to take immediate action to combat climate change. (CNS/Gregory A. Shemitz)

The gap between words and actions on climate change is a sign of "weak" awareness of the urgent steps needed in the next decade to avert a climate disaster, Pope Francis said in his message to participants at the United Nations climate summit in Madrid.

"Numerous studies tell us that it is still possible to limit global warming," Francis wrote in a message released Dec. 4 to the participants of COP 25. "To do this we need a clear, far-sighted and strong political will, set on pursuing a new course that aims at refocusing financial and economic investments toward those areas that truly safeguard the conditions of a life worthy of humanity on a 'healthy' planet for today and tomorrow."

The U.N. climate change conference opened Dec. 2 in Spain, where diplomats will continue work toward implementing the Paris Agreement. A key objective is raising ambition among countries — what has become a regular theme at these gatherings since the Paris climate deal was adopted in 2015.

So far, the pledges from nations to reduce their emissions have fallen well short of meeting the Paris Agreement's goal — holding average global temperature rise as low as 1.5 degrees Celsius (2.7 degrees Fahrenheit) — and with it, avoiding increased heatwaves, flooding and sea-level rise that accompany higher degrees of warming and would threaten hundreds of millions of people.

It's expected that countries will use COP 25 as a stage to put forward plans to cut emissions faster and deeper. Under the Paris Agreement, nations are required in 2020 to submit new national climate action plans.

Francis noted that the Paris accord's rapid ratification in less than a year showed a "growing awareness" of the importance of international cooperation to protect the common planetary home.

Pope Francis arrives for a meeting at the Vatican June 14, with executives of leading energy, petroleum and natural gas companies, leaders in investment firms and climate scientists. (CNS/Vatican Media)

"Sadly, after four years, we must admit that this awareness is still rather weak, unable to respond adequately to that strong sense of urgency for rapid action called for by the scientific data at our disposal," he said, adding that the shortfall of national commitments to date "demonstrate how far words are from concrete actions!"

The pope said there was growing agreement in linking efforts to address climate change and poverty, as well as the need for transforming development and consumption models. The concern, he said, is whether there is the political will to mitigate climate change at a pace that respects "the timeline required by science."

"We are facing a 'challenge of civilization' in favor of the common good and of a change of perspective that places this same dignity at the center of our action, which is clearly expressed in the 'human face' of climate emergencies," Francis said.

"There remains a window of opportunity, but we must not allow it to close," he said.

Patricia Espinosa, executive secretary of the U.N. Framework Convention on Climate Change, said in her opening address that the window is "closing rapidly," and called for COP 25 to be "the launchpad for more climate ambition to put the world on a transformational path towards low carbon and resilience."

Reports from climate scientists have stated that global greenhouse emissions must be nearly halved in the next 10 years in order to keep the planet on pace to reach net-zero emissions by 2050. That pathway, scientists say, will hold average global temperature rise to 1.5 degrees C. 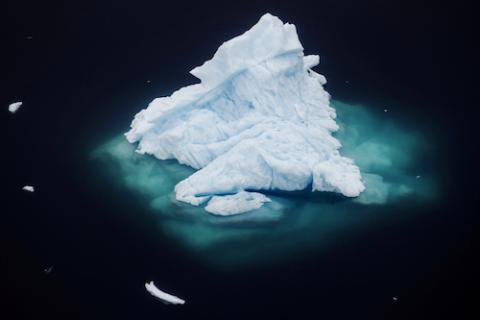 An iceberg floats in a fjord near Tasiilaq, Greenland, June 24, 2018. (CNS/Reuters/Lucas Jackson)

Two reports released in recent days highlight the gap that remains between what the science says is required to limit global warming below disastrous levels and what the global community has done.

The annual U.N. emissions gap report stated that global greenhouse gas emissions must decrease by 7.6% each year in the next decade — the equivalent of a fivefold increase over current commitments — to keep the planet on track to meet the 1.5 degrees C target.

The report was the latest to conclude that current national pledges will lead to warming of roughly 3 degrees C by the end of the century. An analysis of current temperature data by the Washington Post in September found about one-fifth of the planet has already warmed by 1.5 degrees C.

A separate report from the Global Carbon Project, released Dec. 4, determined carbon dioxide emissions will reach a record high in 2019, rising at an estimated rate of 0.6%. Despite the continued increase in emissions, the growth rate was slower than in 2018 (2.1%), and this decade saw emissions grow at a slower pace than the previous 10 years, which the report attributed to the decline in use of coal. An estimated 90% of all emissions from human activities come from fossil fuels.

The report also found emissions declined slightly in the United States and the European Union, while emissions rose in China and India. Together, those nations account for more than half of all global carbon emissions.

While the U.S. under President Donald Trump has begun the process to exit the Paris Agreement, Democratic leaders led by House Speaker Nancy Pelosi arrived in Madrid with a message of "we're still in it." In comments to the Climate Vulnerable Forum on Dec. 2, she called climate change "an existential threat" to public health, the economy and national security. Pelosi added it was also a moral issue, and quoted Francis in saying, "The climate is a common good belonging to all and meant for all."

In a statement, the general council of the Adrian Dominican Sisters invited people to join in prayer for action at COP 25 and to urge their U.S. senators to support the International Climate Accountability Act. Passed by the House in May, it would require a presidential plan in 120 days to meet the U.S. pledge under the Paris Agreement.

Next week, EU leaders are expected to commit to net-zero emissions by mid-century as part of what's been billed a "European Green Deal." At their fall assembly, EU bishops discussed the climate proposal and called for it to set social and environmental standards ensuring an integral human development.

Francis addressed his message to Carolina Schmidt, the Chilean minister of environment who is serving as president of COP 25. The South American nation was set to host COP 25 until last month when its president said it would forgo its hosting duties due to political unrest. Chile itself had stepped up to host only after Brazil, after the election of Jair Bolsonaro, backed out as the host nation.

At the Amazon synod in October, bishops of the region declared in their final document that climate change was "above all" the greatest threat to life in the rain forest spanning 2.1 million square miles and nine countries.

In a separate statement, nine cardinals participating in the synod decried inaction on climate change as "a crime towards humanity and nature." The cardinals, representing nations across the globe, expressed concern that the Amazon will become a savannah, and that disruption of its ability to absorb carbon from the atmosphere could "send the Earth into a spiral of runaway climate change."

They joined the Amazonian people and youth climate movement in calling for more urgent action, and voiced "disappointment with the lack of honesty and transparency" by some countries whose policies do not match their statement climate commitments. While endorsing nature-based solutions, the cardinals said "there is no lack of ideas" or knowledge to undergo an ecological transition, but rather "it is about implementation." 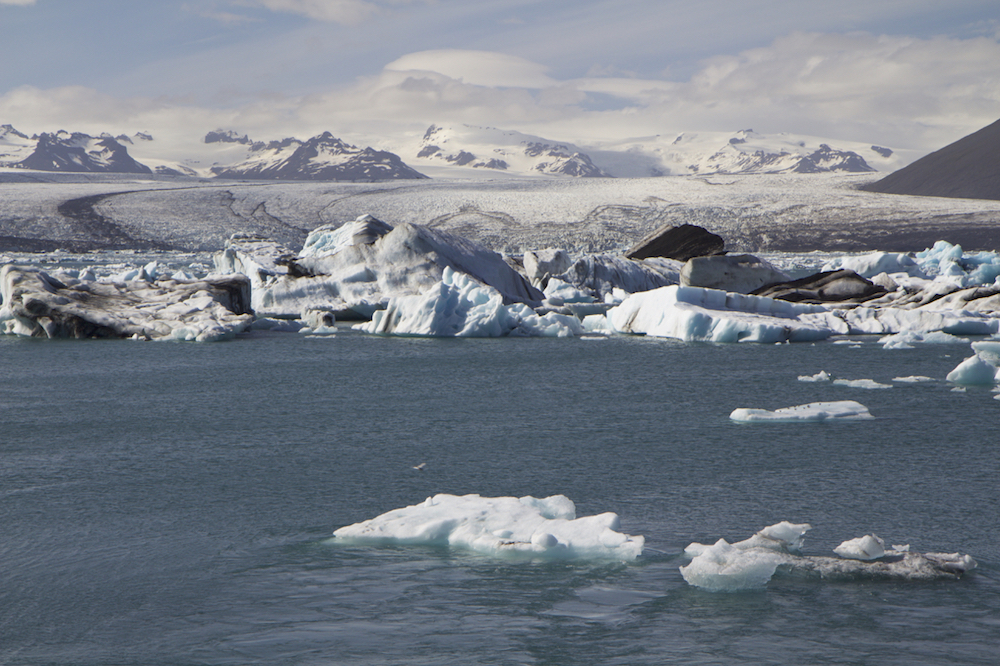 "Government, Business and Society have been delaying action for too long, while the vulnerable suffer and our planet literally burns before our eyes. They deserve an answer and response to their calls, as we only have one planet to live on," the cardinals wrote.

Along with the Vatican delegation, representatives from numerous Catholic development agencies, religious orders and Global Catholic Climate Movement are present in Madrid.

On Dec. 8, Cardinal Osoro Sierra of Madrid will celebrate Mass for the participants, joined by Archbishop Miguel Cabrejos Vidarte, president of the Episcopal Conference of Latin America, or CELAM.

In addition, Catholic development agencies part of CIDSE, a network of 18 organizations based mostly in Europe, will also host a day-long forum Dec. 5 on climate change and the common home at the Paul VI Foundation. Catholic groups also plan to lead a number of side events inside the official COP center.

A People's Climate March is scheduled for Dec. 6, aligning with the date of the next global youth strike for action on climate change.

In his message, Francis said today's youth "show a heightened sensitivity to the complex problems" arising from the climate emergency. He urged leaders not to burden future generations with problems caused by their predecessors.

"May we offer the next generation concrete reasons to hope and work for a good and dignified future!" Francis wrote.