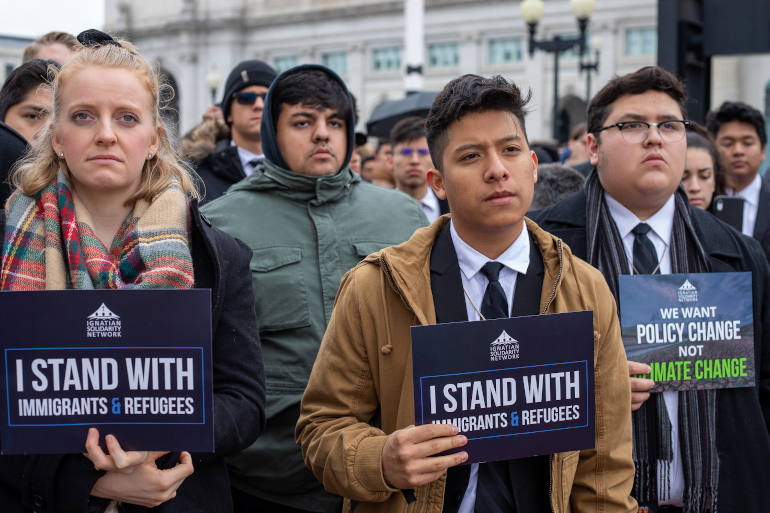 Students of Jesuit schools take part in a public demonstration for immigration reform and environmental justice outside Union Station in Washington D.C. Nov. 18 on the final day of the Ignatian Family Teach-In for Justice. (Ignatian Solidarity Network/Kelly Swan)

The annual Jesuit student takeover of Capitol Hill this week brought more than the usual fiery spirit for social justice into the halls of Congress, as the teens and young adults hand-delivered a petition on behalf of tens of thousands of Catholics nationwide in support of a Senate bill that would force federal action to address climate change.

The 22nd Ignatian Family Teach-In for Justice (Nov. 16-18), organized by the Ignatian Solidarity Network, drew more than 2,000 students from Jesuit high schools and colleges to the Washington, D.C., area to pray and work together toward addressing injustice and inequality in their world.

On the final day, many of them flocked to congressional offices, equipped with talking points and proposals on immigration reform and environmental justice for their elected officials. In tow were also copies of a petition signed by more than 58,000 people urging their senators to support a House-passed bill requiring the president to create a plan to meet the U.S. commitment under the Paris Agreement.

The petition effort was a joint initiative by Ignatian Solidarity Network and Catholic Climate Covenant.

The International Climate Accountability Act would give the White House 120 days to submit a plan to Congress to achieve the U.S. goal — reducing greenhouse gas emissions by 26-28% under 2005 levels by 2025 — and to annually update the plan. In essence, it would block a president from departing the Paris climate deal, and also prohibits using funds to withdraw from it. The House of Representatives passed its version of the bill in May.

President Donald Trump on Nov. 4 began the formal withdrawal process from the Paris Agreement. It will take effect a year later.

The lone Republican among the bill's 46 co-sponsors is Sen. Susan Collins of Maine. 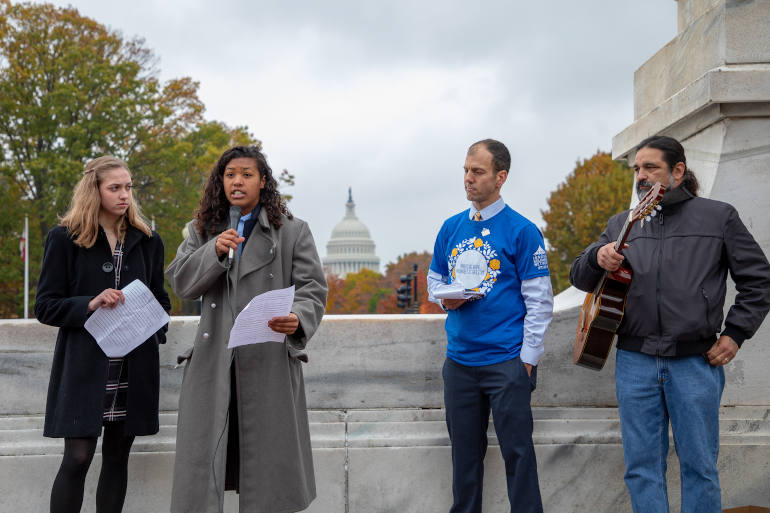 The petition drive was supported by the Leadership Conference of Women Religious, the Sisters of Mercy, Franciscan Action Network, the Association of U.S. Catholic Priests and the Columban Center for Advocacy and Outreach.

"Climate change is already causing major suffering around the world intensifying floods and droughts and impacting food systems. Sea-levels are rising affecting millions today and future generations will suffer even more. Meanwhile, the federal government is failing to provide global leadership to protect life. This is not morally acceptable," reads sample language of a form letter addressed to senators.

He said the petition received support from people in all 50 states, and not just predominantly from traditionally blue ones. Florida, for instance, contributed 25,000 signatures, more than any other state. Aguto also pointed out the Catholic Climate Declaration — a separate statement backing the Paris Agreement endorsed by roughly 800 Catholic institutions — collected signatures from bishops in Alaska, Alabama, Mississippi, Wyoming, Texas and Kentucky.

Copies of the Catholic Climate Declaration were also shared with Senate offices. 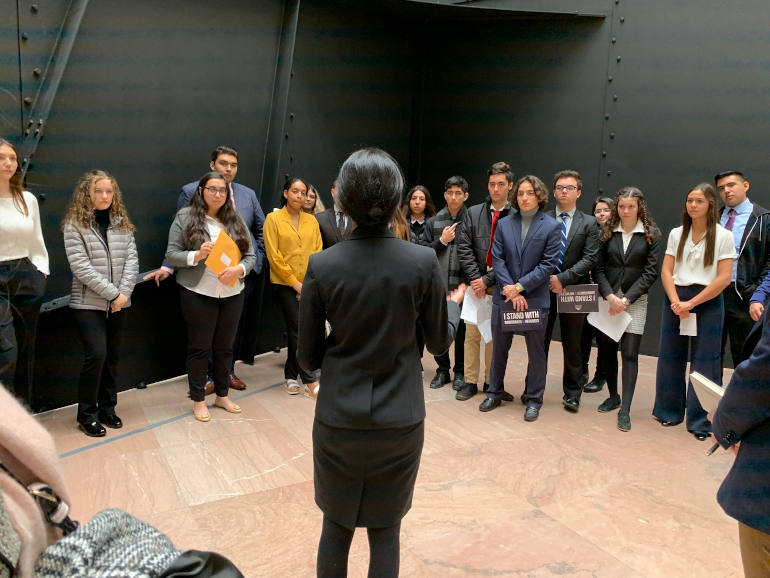 Students from several Jesuit high schools and universities in California meet with a staffer from Kamala Harris' office Nov. 18 in the lobby of the Hart Senate Office Building as part of the Ignatian Family Teach-In for Justice. (Ignatian Solidarity Network/Kelly Swan)

A delegation of roughly two dozen students from Jesuit schools in California presented the signatures and declaration to staff members for Sen. Kamala Harris during a meeting in the lobby of the Hart Senate Office Building.

While they described how wildfires in the state have interrupted their lives in direct and indirect ways, the students spent the bulk of their time pressing for a more humane immigration system.

As Jesuit students, they said, they are taught to speak up for the voiceless, and their Catholic faith holds that all people should be treated with dignity.

One by one, the students talked about their own experiences with immigration. Nearly all said they've been impacted directly or indirectly by inhumane migration policies. They addressed ICE raids across the state and the Trump administration's family separation and Remain in Mexico policies.

Oscar, a student at Bellarmine College Preparatory in San Jose who asked that his full name not be published, came to the U.S. from Mexico when he was 4 and received DACA status in 2017. The Deferred Action on Childhood Arrivals (DACA) program shields from deportation some immigrants who came into the country illegally as children. But now he fears for himself and his younger sister should the Supreme Court uphold the Trump administration's revoking of the program.

"It's just a fear of going back to a country I don't know," he said.

Taylor Schlicht, a junior at Xavier College Preparatory School in Palm Desert, said hearing from immigrant speakers at the Teach-In ahead of the lobby day was "refreshing," because it showed to her that the policies they want aligned with students' experiences around immigration in Southern California.

"It was nice knowing that we can make our voices heard and be a voice for the voiceless," she told NCR.

Over the course of the Teach-In, students heard from speakers addressing immigration, race, sexual orientation and the environment.

While for some the congressional meetings may have served as their first foray into activism, others arrived with prior experience on their campuses, battle wounds and all.

A number of students from Creighton University came to the Teach-In in search of advice and inspiration after an effort to divest the Omaha, Nebraska, school's endowment from fossil fuels came up short just days earlier.

In a statement issued Nov. 16, as the Teach-In was kicking off, the students said they were "disappointed" by Creighton president Jesuit Fr. Daniel Hendrickson's decision not to enact a nonbinding divestment referendum supported by 86% of students who voted. The students called the school's continued investment in coal, oil and natural gas "an infidelity to the mission of our University."

"We believe this legislation outlined the clear moral, scientific, and financial arguments supporting the divestment of Creighton’s endowment from fossil fuels. We especially believe that our call for the University to devise a divestment plan was clearly in accordance with and expressive of our Jesuit, Catholic mission," the students wrote.

The students said that Hendrickson's response did not address their proposal to first divest from the top-200 emitting fossil fuel companies by 2025, what they estimated represented 2% of Creighton's $568 million endowment. The students said this approach "was not only reasonable but conservative." They stressed that they did not propose total, immediate divestment, instead tying that goal to the timeline set by the university to reach carbon neutrality — currently by 2050.

In response to Hendrickson's proposal to hold a university-wide forum in January, the students requested that all members of the school's board of trustees attend, along with members of the president's cabinet.

While welcoming dialogue and acknowledging other steps to review investment guidelines and increase sustainability efforts, they argued that "such dialogue has clearly and definitively occurred among students and faculty." They cited the student vote and a similar measure passed in May by the faculty Senate of the College of Arts and Sciences.

"A large majority of the campus has dialogued and voiced clear support for divestment," the students said.