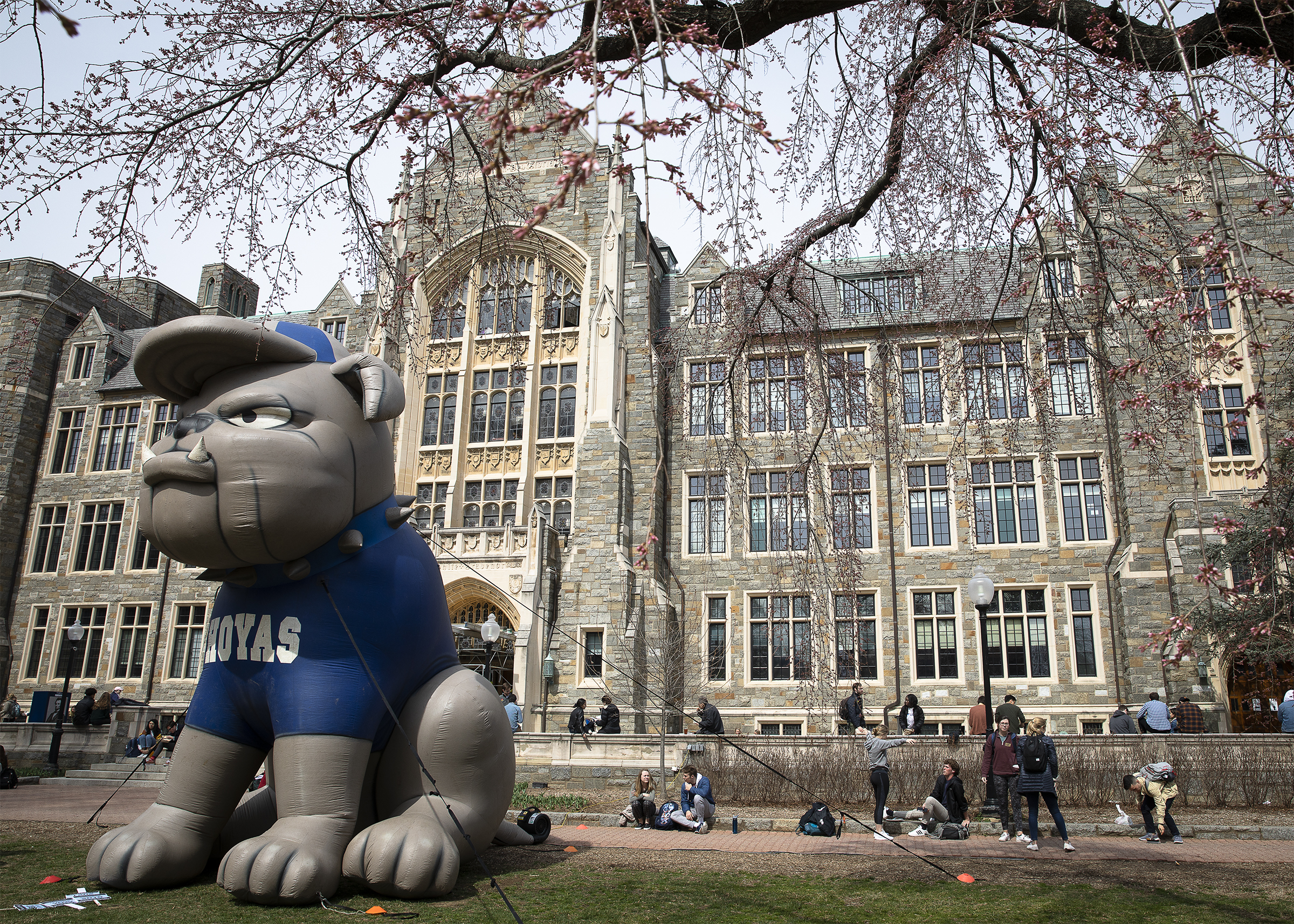 Students are seen on the campus of Georgetown University in Washington March 20, 2019. (CNS photo/Tyler Orsburn)

Georgetown University has pledged to scrub out investments in fossil fuels from its nearly $2 billion endowment over the next decade while accelerating investments in clean energy, a major step by the Jesuit school motivated by concerns with the risks posed by climate change to human, biological and financial health.

In an announcement Thursday afternoon, the university's board of directors adopted a policy to divest from publicly traded fossil fuel companies within five years, and to divest from existing private investments no later than 10 years. More immediately, Georgetown will cease any new investments in companies whose primary business is the exploration and extraction of coal, oil and natural gas, and will ramp up investing in renewable energy and energy efficiency.

With the new policy, Georgetown becomes the most prominent private American university to date to commit to fully divest from fossil fuels. It is the latest institution in a worldwide campaign that has reallocated trillions of dollars away from coal, oil and gas companies, and that supporters have compared to the international divestment movement against apartheid in South Africa in the 1980s.

Georgetown president John DeGioia said in a message to the university that the divestment decision on fossil fuels reflected an effort to "continue to integrate its commitment to social justice, protection of human life and dignity, stewardship for the planet, and promotion of the common good into its investment management practices."

He continued: "Our pursuit of building a more sustainable future is guided by our identity as a Catholic and Jesuit institution, and through the inspiration of Pope Francis, who has articulated an ambitious vision for all of us in his 2015 encyclical, Laudato Si': On Care for Our Common Home. His words inform and strengthen our commitment to the environment, and to one another, ensuring that as we move forward, we do so in a spirit of mutual respect and collaboration."

It was a collaboration between Georgetown's Committee on Investments and Social Responsibility and the student group GU Fossil Free that ultimately led to the new divestment policy. Over the course of eight years, students have pressed their school to divest the carbon-emitting fuel sources from its $1.95 billion endowment, submitting their latest proposal last March. At its Jan. 10 meeting, the socially responsible investment committee unanimously recommended investing in renewables while divesting from fossil fuels.

In an interview with NCR Friday, Michael Barry, Georgetown chief investment officer, called GU Fossil Free "a great partner," crediting them with drawing the university’s attention to the issue of fossil fuel divestment and climate change.

"From the very beginning, although not perfect, we decided to have a relationship of collaboration. And I think that's made all the difference," Barry said.

At the same time that the university board announced its decision Thursday, the student body voted on a referendum calling for divestment, passing it with 90% of the vote in support.

"We are thrilled that our university has taken this important step in supporting climate justice, student voices, and financial accountability," GU Fossil Free said in a statement. 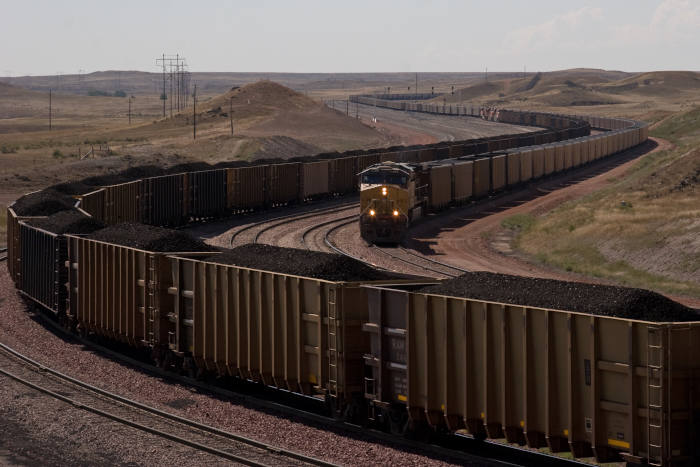 Victoria Boatwright, a sophomore majoring in biological physics, said she was "ecstatic" when she heard the news after sailing practice. In the hours since, she's shared joyful tears with friends and excited phone calls with alumni once part of the student organization. The news came as a shock, she said, adding that most GU Fossil Free members would have not predicted the university would divest this year.

"It was just a huge breakthrough moment," she told NCR.

She added that GU Fossil Free, made up of around 15 dedicated members, appreciated that the administration alerted them prior to making the public announcement.

In a statement explaining the new investment policy, Barry said "Divestment allows us to divert more capital to fund development of renewable energy projects that will play a vital role in the transition away from fossil fuels — part of the long-term solution required to prevent the most dangerous effects of climate change."

Barry added that investments in renewable power have yielded profits for the endowment, and they would continue seeking out new opportunities.

"But climate change, in addition to threatening our planet, is increasing the risk of investing in oil and gas companies, as we expect a more volatile range of financial outcomes," the chief investment officer said. "We will continue to evaluate the efforts of these companies, and be hopeful that many will move further toward contributing to a sustainable future."

Speaking to NCR, Barry said that the university, inspired by Laudato Si', is cognizant of the impact climate change has on the world’s poorest communities, and that it felt a responsibility to not just divest, but invest in climate solutions.

Asked what message he hoped the Georgetown policy might send to other Catholic institutions, he said "We hope that others will take a serious look at this issue, as we have, contemplate all of the impacts, the pros and the cons and arrive at a similar conclusion that it is possible to pursue this implementation and tilt their financial assets toward sustainability." 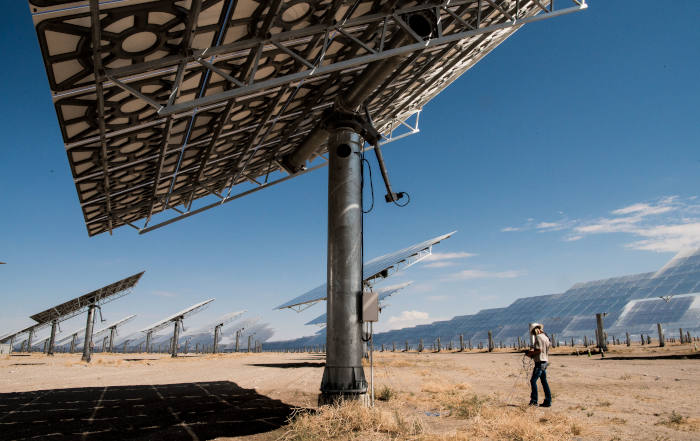 In a tweet, Georgetown's Kalmanovitz Initiative for Labor and the Working Poor called the decision "a historic step to align Georgetown's investment policies with its mission to advance the common good through care for creation."

Georgetown becomes the third Catholic university to divest from fossil fuels, following the University of Dayton in 2014 and Seattle University in 2018.

Founded by the Jesuits in Washington, D.C. in 1789, Georgetown is widely viewed as one of the nation's leading academic centers. Like many colleges and universities, it has been under pressure from students for years to divest from fossil fuels, as part of a campaign begun by 350.org co-founder Bill McKibben to send both a financial and moral message to the global economy that fossil fuels must remain in the ground in order to limit global warming to avert its most catastrophic consequences, including sea level rise, more intense droughts and heat waves, and more destructive storms.

To date, the Go Fossil Free campaign has mobilized more than $14 trillion in pledges to divest, with faith-based organizations, at 30%, representing the largest share of any institutions.

The environmental activist McKibben tweeted praise for the work of the Georgetown students, as well as Pope Francis, saying "Laudato Si is an unmistakable call to action, especially for his fellow Jesuits."

The path to full divestment at Georgetown was a winding one. After GU Fossil Free formed in 2012, it called for their school to freeze all new fossil fuel investments and devise a five-year divestment plan. Three years later, Georgetown announced it would eliminate coal from its investment portfolio. In 2018 it added tar sands oil to the list. But the two policies did not silence the student call for full divestment.

A key moment, students say, was the university board in 2017 approving a socially responsible investing policy. Since its implementation, the university has stated it would not invest tar sands oil — considered one of the most carbon-intensive fuel sources — as well as avoid investments in private prisons.

The decision by Georgetown comes amid signs that the financial world is more closely considering the way climate change will impact the global economy.

In mid-January, Blackrock, the world's largest money manager, announced it would make sustainability and climate risks central components of its investing strategy. A month earlier, the Sisters of Mercy of the Americas filed a joint shareholder motion urging the world's largest investment firm, which handles upwards of $7 trillion, to use its status to press other companies to more quickly address climate change. And last week, Democratic senators wrote to 11 banks urging them not to finance oil and gas projects in Alaska's Arctic National Wildlife Refuge, which President Donald Trump has opened to mining.

For the past two years, Pope Francis has hosted energy executives and financial investors at the Vatican to discuss a just global energy transition in light of human-driven climate change, which scientists attribute predominantly to burning fossil fuels. In each occasion, the pope has repeated his message that the time is now for the world to move away from fossil fuels.

In March the Vatican will host a three-day conference called "The Economy of Francesco," inviting young economists to Assisi to develop an economy that is "fair, sustainable and inclusive." While the Vatican has not taken a stance on divestment, Francis stated in Laudato Si'  "We know that technology based on the use of highly polluting fossil fuels — especially coal, but also oil and, to a lesser degree, gas — needs to be progressively replaced without delay" — what has become a rallying cry for those championing divestment. To date, roughly 160 Catholic institutions have publicly committed to divest, according to the Global Catholic Climate Movement.

"Now is the time to abandon our dependence on fossil fuels and move, quickly and decisively, towards forms of clean energy and a sustainable and circular economy," Francis said in his 2019 message for the World Day of Prayer for the Care of Creation.

Boatwright, the GU Fossil Free member, said that many students supported divestment not only as a response to the climate crisis, but also as living out the school’s Jesuit values.

"I think that we're just at the perfect place for our university to not only say this is wrong financially, but it's wrong morally. And we have the backbone to be able to say that this is something our university can stand behind because of our principles," she said.

She is also hopeful that Georgetown’s movement on divestment will help "push forward" other student groups on Catholic and college campuses advocating for divestment. She said important lessons they’ve learned are to maintain communication with the school’s administration, build student engagement and, perhaps most of all, practice patience.

"Just don't ever give up, because it's really taken a lot of work. And I think we're really lucky to have an administration who's been willing to communicate with us and hear us out."