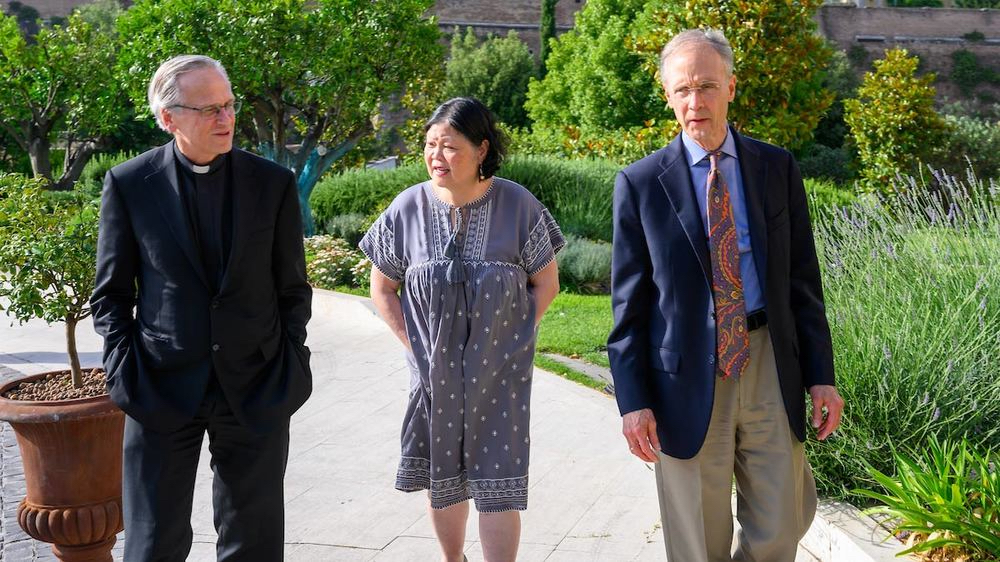 The best way to persuade fossil fuel executives to do something about the climate crisis, in the view of Notre Dame President and Holy Cross Fr. John Jenkins, is to provide them with reasons and options that appeal to their shareholders and board members.

At the top of his list are two considerations that, on one level, are not especially supportive of the companies' bottom lines: carbon pricing and looming liability claims.

Carbon pricing would depress demand for the very stuff the companies make and sell. And future legal claims by those harmed by fossil fuels could threaten the companies' future much as tobacco companies were held to account for pushing products known to kill.

For the 65-year old Jenkins, the measured CEO of one of the world's leading Catholic institutions, focus on pricing and liability represents a way forward that minimizes risk and maximizes the chances for collaborative progress.

The way he sees it, such an approach provides cover for executives constrained in various ways from placing the health of the planet above their own corporate interests.

Jenkins described his work on the climate crisis — one of three off-campus issues he's focused on — in a Nov. 19 interview with NCR in his fourth-floor office beneath the university's iconic golden dome.

As the convener of two high-profile but private Vatican gatherings of oil executives, he's unusually well-positioned to assess what it will take to move the oil moguls to address the crisis their companies have helped create in response to steadily rising demand for energy by businesses and consumers alike.

"We can't put the onus on these companies to sacrifice," he said. "They won't do it. ... The CEO is held accountable to shareholders. If he wants to make a dramatic self-sacrifice, he's going to lose his job."

"But if there's a regulation," added Jenkins, elected last month to his fourth five-year term as Notre Dame's president, "if there's an incentive to do this ... what we heard, frankly, is those executives saying we want this, this regulation."

Related: Carbon (revenue) to the people!

More than 40 countries and some regions of the U.S. have introduced carbon pricing in various forms, often involving a tax on fossil fuels that discourages its production and sale. Some proposals include carbon dividends that would distribute a portion of the tax revenue to consumers, with particular attention to people less able to absorb the higher energy costs resulting from the new taxes.

Carbon pricing remains a contested idea, with some climate activists arguing that it would permit fossil fuel makers to continue production as long they're willing to pay the price. Jenkins and other supporters maintain the taxes would serve two purposes: They would lower production of harmful power sources and raise some of the revenue needed for investment in such renewable forms of energy as wind and solar.

Noting that "this country's politics are challenging" in terms of enacting climate-friendly national policies, he added: "It's an important issue in the current campaign and I hope it gains traction. ... It does seem to me that public opinion is shifting and there's genuine concern."

At least one initiative under discussion would address both carbon pricing and the liability issue, an approach endorsed last year by the world's largest investor-owned oil company, ExxonMobil. Vox reported last year that the firm donated $1 million to a group lobbying for carbon pricing as part of legislation that would also shield the company from future liability lawsuits. In the meantime, ExxonMobil announced a significant increase in oil production and has been in court in New York defending itself against charges that it misled shareholders about what it knew when about climate change.

Carbon pricing was one of two key steps endorsed in statements signed by 31 participants — including ExxonMobil CEO Darren Woods — that Jenkins gathered in a June 13-14 meeting at the Vatican. The group is expected to meet again next year, probably at Notre Dame. 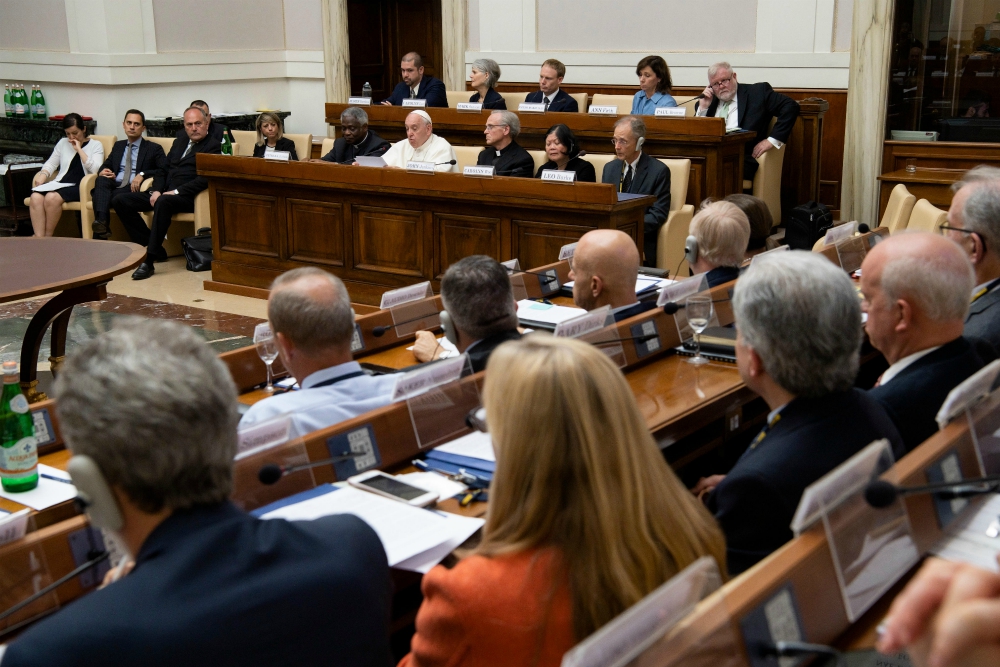 Pope Francis speaks June 14 to executives of leading energy companies meeting at the Vatican to discuss mitigating the effects of climate change. The pope is seated between Cardinal Peter Turkson, president of the Dicastery for Promoting Integral Human Development, and Holy Cross Fr. John Jenkins, president of the University of Notre Dame, co-sponsors of the meeting. (CNS/Vatican Media)

Pope Francis met with the participants at both this year's meeting and the one conducted at the Vatican in 2018. "There is no time to lose," he told last year's meeting. This year, he said the climate crisis "threatens the very future of the human family."

The group of executives, whose firms account for about 25% of the world's fossil fuel production, agreed that "reliable and economically meaningful carbon pricing regimes, whether based on tax, trading mechanisms or other market-based measures, should be set by governments at a level that incentivizes business practices, consumer behavior research and investment to significantly advance the energy transition while minimizing the costs to vulnerable communities and supporting economic growth."

The group also declared: "Undeniably, the Earth is a single system and humanity is a single whole. This requires a new level of cooperative leadership, trust-building, and commitment. We embrace this challenge."

In a second statement, the group agreed that "companies should provide clarity for investors about how they are planning and investing for the energy transition. This includes issuing disclosures and provide meaningful and material information consistent with the reporting obligations in their particular jurisdictions."

Jenkins said that some of the executives signed the statements against the advice of corporate colleagues who warned they were committing themselves to positions they might regret.

But he said the executives were also heeding other voices, confirming reports that at least one of them described a change of heart on climate prompted by a daughter's challenge that he was wrecking the world she'd be growing up in.

Asked in the interview if he could point to any consequential action as a result of the Vatican meeting, Jenkins said: "I'm afraid I can't. I think it's good that we're talking. It does seem to me that the ball is in the court of governments and regulatory agencies."

This year's sessions were opened by Cardinal Peter Turkson, prefect of the Dicastery for Promoting Integral Human Development, the Vatican office that co-sponsored the meeting. According to an account distributed by the Vatican press office, Turkson told the group that "energy transition and care for our common home ... needs to be treated with utmost urgency."

Asked if the sustainability plan followed by his university reflects that heightened level of urgency, Jenkins responded: "It is urgent. At the same time, I think it's important to see that it's complex."

Addressing energy use around the world, he said: "If tomorrow we stopped burning fossil fuels, the global economy would collapse."

That, he added, would mean there'd be no means to "develop the alternative technologies that will get us out of this crisis." 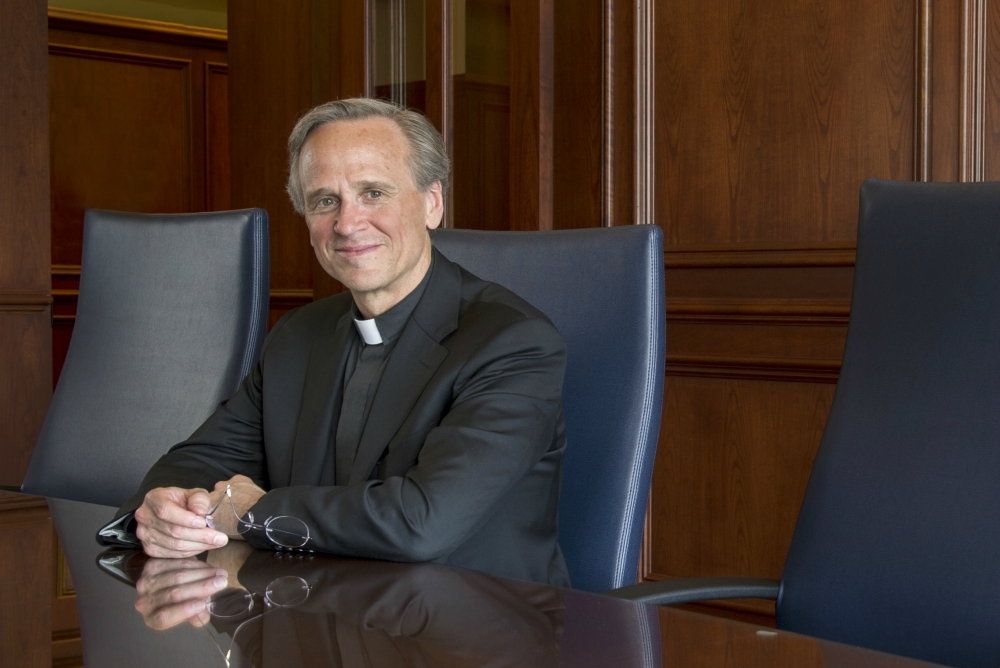 Discussing the decision last week by Creighton University President and Jesuit Fr. Daniel Hendrickson to reject a student proposal to begin divesting from fossil fuel companies, Jenkins noted that, as a native of Omaha, Nebraska, where Creighton is located, he took particular interest in the news.

Notre Dame has also rejected calls to divest. "I just don't see the force of the divestment argument," Jenkins said, noting: "It's symbolic ... but it's not clear to me that [it's] a path to solve the problem."

In addition to climate, the Notre Dame president has focused on immigration and civil discourse as major issues of focus beyond campus concerns. His attention to the latter may explain some of why he's not been more outspoken on the climate crisis.

"I think this will only be solved by collaborative effort," he said. "And if I were to speak out in a way that alienates the business community, that might be counterproductive."

The key questions, he argued, are these: "How can we develop consensus about practical steps? How can we encourage or pressure politicians to take the steps needed?"

Referencing the prophet from Hebrew Scriptures, he added: "There are people out there who are kind of Jeremiahs. It's great to have a Jeremiah, but we need to be bringing everybody along."

A version of this story appeared in the Dec 13-26, 2019 print issue under the headline: Notre Dame's Jenkins charts path on climate crisis.