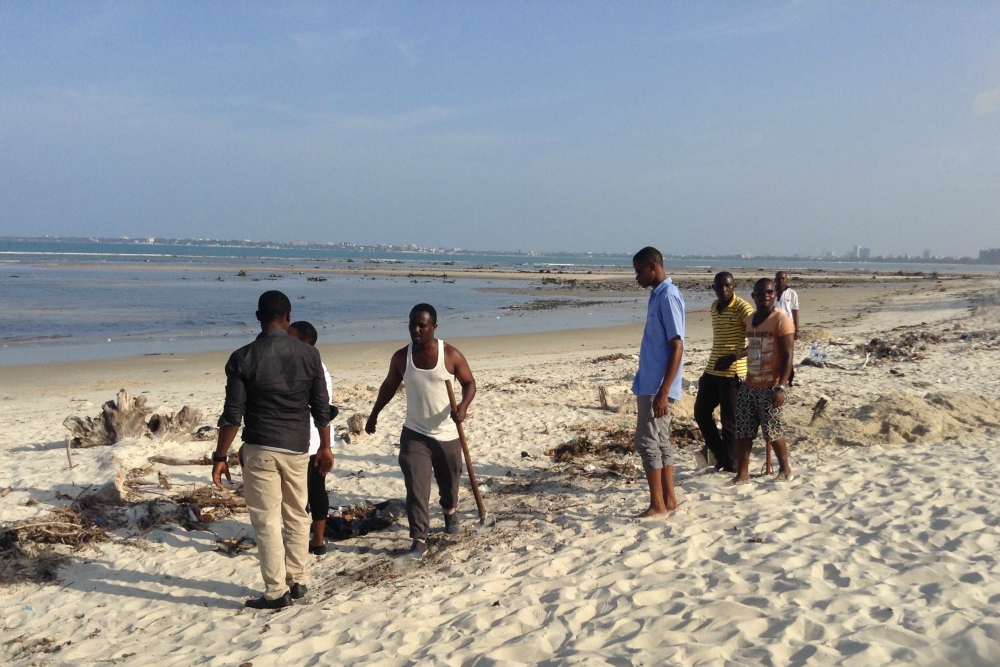 Catholic young people in Dar es Salaam, Tanzania, clean a section of the beach on the Indian Ocean in 2016. (Allen Ottaro)

The fifth anniversary of "Laudato Si', on Care for Our Common Home" arrives at a challenging time, especially in Africa, as governments around the world are marshaling resources to address the global pandemic.

In recent weeks, several parts of East and Central Africa have been pounded by heavy rainfall resulting in raging floods and landslides, killing hundreds and displacing thousands, further compounding efforts to respond to the COVID-19 pandemic. A second wave of locusts, estimated to be 20 times larger than the first wave in January and February, is expected to mature, destroying vegetation from Ethiopia to Tanzania. Experts predict that this will deal a severe blow to food security in the region.

It is against this background that we mark five years of Laudato Si'. 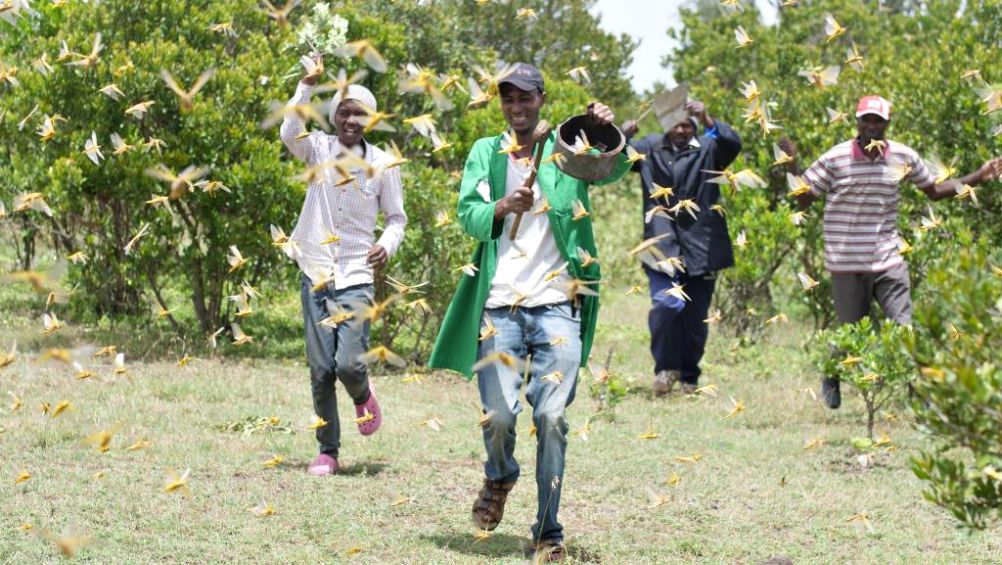 A quick look around the continent suggests a mixed assessment of how actions inspired by Laudato Si' have taken root. In my role as founding executive director at the Catholic Youth Network for Environmental Sustainability in Africa (CYNESA), I have had a unique opportunity to witness the evolution of Laudato Si' in a dozen African countries.

In Kenya, 18 months before the encyclical was released, Bishop James Maria Wainaina issued a pastoral letter on care for God's creation on behalf of the Kenya Conference of Catholic Bishops. The letter was accompanied by a seven-year action plan targeting religious, clergy, catechists and laity. Suggested activities included education, farming and tree planting.

The Bukoba Diocese in Tanzania also had a plan that predated Laudato Si',  a three-year project "to make faith and the Word of God engines for restoration of nature and poverty eradication." Before 2015, many dioceses across the continent were already running environmentally related projects to support farmers and to address the negative impact of such extractive industries as mining in the Democratic Republic of Congo, Zambia and South Africa.

In the period both before and after the encyclical was released, my colleagues and I often found ourselves directed to the local offices of Caritas Internationalis when we'd visit dioceses to discuss climate issues.

That was because environmental concerns were seen purely as a development issue, as opposed to a broader framework of pastoral care. This approach still persists in many places. Even after five years, in some parishes and dioceses, people have heard of the encyclical but have not taken time to read it. Language plays a role in this.

In Rwanda, for example, my colleagues have found that translating the encyclical from French to Kinyarwanda (the national language in Rwanda) would make the document more accessible to many more people. There have been attempts to develop such resources as a Laudato Si' guide prepared by lecturers at the Jesuit-run Hekima University College in Nairobi, Kenya.

The Jesuit Institute in South Africa has produced a Laudato Si' workbook, and offered ecological reflections for Lent this year.

The bishops of the Inter-Regional Meeting of the Bishops of Southern Africa (IMBISA) dedicated their 2016 and 2019 plenary assemblies to study the encyclical. In their most recent plenary, they examined how to empower the laity to play a larger role in implementing Laudato Si'. This is especially important in a region that experiences such climate shocks as droughts, severely disrupting water availability in Cape Town, as well as Cyclone Idai, which killed thousands across Mozambique, Malawi and Zimbabwe.

Cardinal John Onaiyekan, who until 2019 was archbishop of Abuja, Nigeria, in a 2016 op-ed described the drying of the Lake Chad and its impact on local communities, worsening conflicts between cattle herders and farmers as they compete for water and other natural resources. As Pope Francis says in Laudato Si', "everything is connected." As a result, conflicts and migration in the Sahel region are inevitably connected with the climate crisis.

While much has been achieved in bringing Laudato Si' to life in Africa, much urgent work remains.

Catholic agencies involved in addressing the climate crisis need to work in a more coordinated manner. Implementing Laudato Si' cannot be a task left to development agencies only. It has to be taken up across the board. 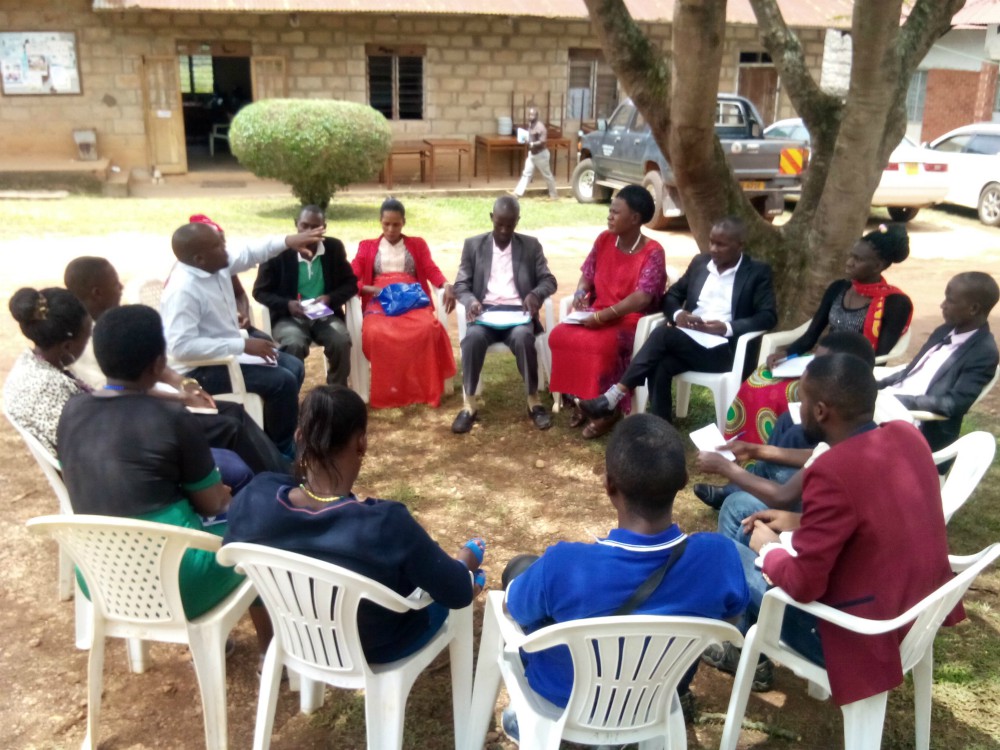 Youth leaders in the Masaka Diocese in Uganda gather for a Laudato Si' study session in 2018. (Allen Ottaro)

The formation of priests, religious and the laity is crucial. They need help to better understand that their vocation to care for creation is critical. Caring for the Earth, as Francis said in February 2015, is not simply a matter for "environmentalists" but for all Christians.

With about 60% of the population below the age of 25 in Africa, deeper engagement of young people in leading creation care efforts would bear tremendous results. Sustained campaigns aimed at raising awareness would help get Catholics on the continent motivated to take action. So would telling the stories of successful initiatives at parish and diocesan levels.

In Laudato Si', Catholic leaders in Africa are strengthened to engage with political leaders across the continent to ensure that social and economic policies take into account both the "cry of the Earth and the cry of the poor."

The United Nations Environment Program, headquartered in Nairobi, has set up the Faith for Earth Initiative, which aims to unite religions across the world in tackling environmental challenges. Catholic leaders in Africa need to take advantage of such efforts to link grassroots ecological initiatives with global environmental policymaking. In the words of Onaiyekan, Laudato Si' "is an encyclical for Africa."

[Allen Ottaro is executive director of the Catholic Youth Network for Environmental Sustainability in Africa, based in Nairobi. He is a member of EarthBeat's advisory panel.]