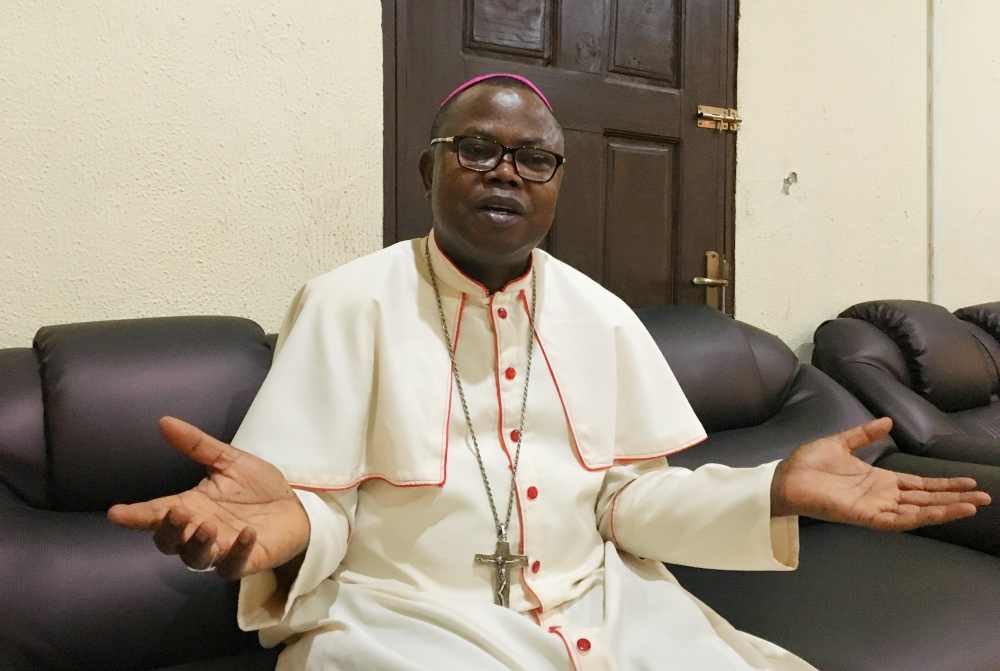 The most important issue facing the Catholic Church in Nigeria these days is neither climate change nor abortion, according to the auxiliary bishop of the Enugu Diocese in Southeast Nigeria. It's migration.

"I consider migration a more sensitive topic to our church and society," Bishop Ernest Obodo told EarthBeat. "Nigerian youths are being compelled by the harsh economic realities in Nigeria to leave the shores of their country to migrate to other nations."

He cited the high number of young Nigerians who die while trying to flee the country as well as the staggering percentage of women and girls who end up victims of trafficking for sexual exploitation.

The ranking of such issues was raised last year as American Catholic bishops debated the relative importance and urgency of climate change and abortion.

At their November meeting, the U.S. Conference of Catholic Bishops adopted a letter stating that abortion is their "preeminent priority." Climate change, on the other hand, was not yet considered an urgent threat, then-conference president Cardinal Daniel DiNardo of Galveston-Houston said at a press conference.

As Obodo noted, Nigeria has a growing migration crisis. According to the International Organization for Migration (IOM), more than 10,000 Nigerians who were stuck in Libya, Mali and Niger after failed attempts to get to Europe have been flown home since 2017. A 2017 IOM report said of the more than 181,000 migrants who traveled by sea from Libya to Italy in 2016, more than 37,000 were Nigerians, with women and unaccompanied children accounting for 11,009 and 3,040 travelers respectively. The report says 80% of those women and girls are likely to become victims of trafficking for sexual exploitation.

Related: In Edo State, advocates aim to engage the people in anti-trafficking fight

Obodo blames the migration situation on the failure of his country's leaders to provide jobs and such other opportunities as security and welfare. Without such assistance, he said, young people make the decision to seek a better life in Europe and other parts of the developed world.

In 2018, Nigeria displaced India as the country with the largest number of people living in extreme poverty, with an estimated 87 million Nigerians living on less than $1.90 per day compared to India's 73 million.

"The central reason for migration is bad governance in Nigeria," Obodo said.

He added: "With her abundant mineral resources and population, Nigeria should be a major player in the world economy. But since independence [granted by Britain in 1960], incompetent leaders often emerged in Nigeria through bad electoral processes, orchestrated by the activities of some mafia groups in the country, in conjunction with some multinational companies, who aid such bad leaders to power, with their selfish motives of manipulating them when they assume office."

He charged that the wealth of the nation has been hijacked by some groups of powerful individuals who wish to enrich themselves, their friends and their families.

"It is only in Nigeria that a few mafia groups are allotted oil wells belonging to the entire country and reap the fruit of the oil deposit of Nigeria while the country is starved of resources," he said. "With enormous money gained from the oil sector, these mafias could control the electoral process and often enthrone whom they wish as leaders."

By "mafia groups," Obodo was referring to powerful individuals and politicians who have alliances with presidents, their predecessors and successors. Activists have asked the government to revoke illegal deals resulting in oil resources being provided to supporters of government leaders. In a 2016 interview with the BBC, first lady Aisha Buhari accused some individuals of hijacking power from her husband, President Muhammadu Buhari.

Obodo continued: "With their ill-gotten wealth, they can as well manipulate the poor. This is a major contributory factor of poverty and unemployment in Nigeria. When youths fail to actualize their dreams of self- fulfillment, they often risk their lives on the high sea, trying to escape to Europe and America."

As a member of the Catholic Bishops' Conference of Nigeria, Obodo participated in the Regional Episcopal Conference of West Africa in Burkina Faso in May 2019 with the theme, "The New Evangelization and Comprehensive Human Development in the Church, Family of God in West Africa." More than 150 bishops, archbishops and cardinals from West Africa took part, with migration the major topic. Obodo is among 78 Catholic bishops in Nigeria.

"At the conference, members were encouraged to harp on the issue of migration and put up programs which will discourage youths from traveling abroad for greener pastures," he said. "Many of our children risk their lives migrating to Europe or America, often through illegal means."

Each year, hundreds of young Africans with dreams of finding a better life in Europe die while crossing the Sahara desert or the Mediterranean Sea.

"The church in Nigeria is not happy seeing a lot of her children being killed en route to foreign continents in search of better life," said Obodo, who called these young people "the future of both our church and society."

Many of those who do make it to a new land, according to Obodo, find themselves trapped in unexpected new forms of subjugation. According to Obodo, Nigerians who migrate to Europe are often subjected to slavery, drugs, trafficking, prostitution and other crimes by white traffickers who facilitated their migration.

While he agreed that abortion and climate change are issues affecting the church in many ways, he said migration tops the list.

"Life is a gift from God and the law of the church condemns abortion," he said while quoting the Catechism of the Catholic Church. "The Code of Canon Law of 1983 indicates excommunication as a punishment for any person who commits abortion."

He added: "The issue of abortion is generally anti-African culture because Africans generally value life."

Abortion is illegal in Nigeria and can only be performed to save a woman's life. But abortions are still common in the country — mostly performed by unskilled medical attendants or personnel. According to the Guttmacher Institute, a sexual health research organization, of the more than 2 million unintended pregnancies in 2012 in Nigeria, 56% ended in an induced abortion.

"Today, there is an ecological crisis in the world which leads to climate change," Obodo said, adding: "Through this encyclical, the pope enters into dialogue with humanity about the care of the Earth which is our common home. Man is destroying his environment through many activities connected with environmental pollution, and thereby destroying himself and his neighbor. The effect of man's destruction of his environment has become devastating that if nothing is done, we may destroy the Earth and bring disaster to ourselves."

Nigeria's Niger Delta region, with its large oil deposits, has been affected by pollution and gas flaring for decades, a practice that has been linked to causing climate change issues and, in turn, health challenges for people living in the region. In 2011, after a study of the damage caused by oil pollution in the region, the United Nations Environment Program recommended a $1 billion comprehensive cleanup of the area to restore polluted environments and put an end to oil exploration and contamination of the region.

"They have the problem with drinking clean water and breathing fresh air, with their consequent health issues," Obodo said. "The church in Nigeria frowns at environmental pollution and is much concerned about climate change and its effect on our climate. She preaches against all actions connected with environmental degradation."

Deforestation, according to Obodo, is another climate change issue the country is facing. "There is not much effort by the government to enforce tree-planting campaigns to save our environment. Cities are planned and many houses are built without an adequate plan for afforestation."

Among all these issues, Obodo's views on migration stand firm. He said that the popular refrain still holds true: "Whether east or west, home is the best."

"No one would like to leave home for a foreign country if all things are equal," he said. "Nigeria loses a greater percentage of her youth population to foreign countries. This has a bad impact on our present age but especially for the future generation. The root causes of migration, which is bad governance, is a great concern to the church and everything must be done to put in place good government in Nigeria."