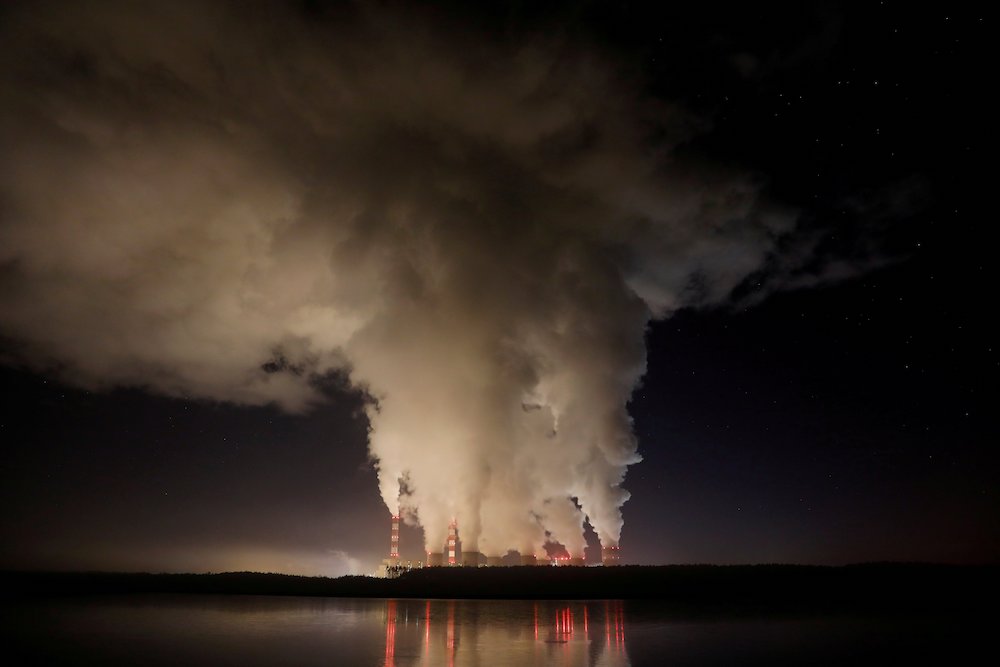 Poland's Belchatow Power Station, the biggest coal-fired plant in Europe, is pictured in December 2018. When it comes to caring for creation, there is a "slight disconnect" between the pope's call for urgent action and the slow or lack of action by most Catholics, says Cardinal Peter Turkson, prefect of the Dicastery for Promoting Integral Human Development. (CNS/Reuters/Kacper Pempel)

The five-year mark for the Paris Agreement is no time to rejoice, but rather recognize "we're not doing well" in achieving its goals to curb greenhouse gas emissions and limit global climate change, top Vatican officials said this week.

"It's a blessing to come to this anniversary," Cardinal Peter Turkson, prefect of the Vatican's Dicastery for the Promotion of Integral Human Development, said at a webinar Dec. 9. "But unfortunately, we don't come with a record that enables us to rejoice as having achieved something on climate change. The climate scientists are telling us that we are [heading] toward a 3-degree rise in surface temperature change."

He continued, "We're not doing too well. We cannot applaud ourselves and we cannot tap ourselves on the back and say we've done well. We need to commit more strongly."

In a separate video message a day later, Cardinal Pietro Parolin, Vatican Secretary of State, said the world faces an "uphill" journey in implementing the Paris Agreement, and announced that Pope Francis would take part in a virtual United Nations summit on Saturday to press countries for more ambitious commitments and political will on climate change.

Turkson's comments came during a webinar co-sponsored by the Vatican's COVID-19 commission ahead of the upcoming Paris Agreement anniversary, while Parolin delivered his remarks at a similar event hosted by the ambassadors of the United Kingdom, France and Italy to the Holy See.

On Dec. 12, 2015, 195 nations adopted the Paris Agreement at COP 21, the United Nations climate summit held that year in Paris. The monumental accord was the first time nearly every nation on Earth, rather than just the most industrialized countries, committed to reducing greenhouse gas emissions.

The Paris Agreement calls for holding average global temperature rise to "well below" 2 degrees Celsius (3.6 degrees Fahrenheit), while striving to limit the increase to 1.5 C (2.7 F). To meet the 1.5-degree target, climate scientists say that global emissions must reach net zero no later than 2050 and be cut in half by the end of this decade. That will require massive economic and societal shifts, including pivoting from fossil fuels to renewable energy sources.

In the five years since Paris, countries have only inched forward.

On Saturday, the U.N. and United Kingdom will co-host the Climate Ambition Summit, where Francis is expected to speak by video. The event is the latest effort to ramp up global commitments and recapture momentum for the Paris Agreement and addressing climate change, which lost ground in the coronavirus pandemic.

Parolin said that with current dual crises confronting the world, "we find ourselves facing a real social and cultural challenge," Vatican news reported. He said the moment calls for a new cultural model built on awareness, wisdom and will — the latter in shortest supply.

"Strengthening political will is one of the reasons why we are here," he said of the Vatican's participation in events around the Paris accord anniversary.

2020 has been a year of milestones for the environmental movement. April marked the 50th celebration of Earth Day. And like the Paris Agreement, Francis' encyclical "Laudato Si', on Care for Our Common Home" also arrived at its five-year mark. 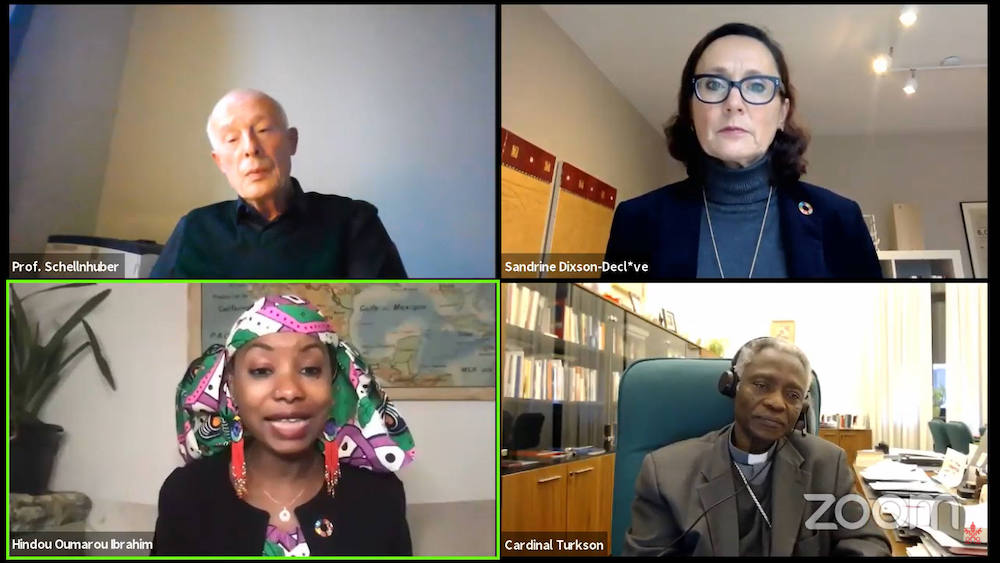 The Vatican's Dec. 9 "Faith, Science and Youth: A call for an ambitious Climate Summit" webinar included, top row, from left: John Schellnhuber, founding director of the Potsdam Institute for Climate Impact Research, in Germany, and a member of the Vatican's COVID-19 task force; Sandrine Dixson-Declève, co-president of the Club of Rome, who moderated webinar; and, bottom row, from left: Hindou Oumarou Ibrahim, an environmental activist with the Association of Peul Women and Autochthonous Peoples of Chad; and Cardinal Peter Turkson, prefect of the Vatican's Dicastery for the Promotion of Integral Human Development (NCR screenshot)

The expectation was that such celebrations would mobilize masses of people worldwide to press for substantial policies and actions to reduce emissions ahead of COP 26, the next U.N. climate summit, which had been scheduled for earlier this month in Glasgow, Scotland. At that gathering, nations were expected to submit updated — and more ambitious — climate plans.

But the coronavirus pandemic dislodged the original plans, as the summit was postponed until 2021, and global attention turned from bending the emissions curve to subduing a highly contagious virus.

"The COVID pandemic has demonstrated that our planet and our people are increasingly sick together," said Sandrine Dixson-Declève, co-president of the Club of Rome, who moderated the Dec. 9 Vatican webinar, which was organized with numerous Catholic development and climate organizations.

As the pandemic has charged forward, it has done little to modify climate change projections.

Carbon dioxide emissions are projected to decline by 7% in 2020, according to the U.N. Environment Programme, largely because of decreased activity during the pandemic. But that decline barely registers in the larger emissions picture, John Schellnhuber, founding director of the Potsdam Institute for Climate Impact Research, in Germany, and a member of the Vatican's COVID-19 task force, said at the webinar.

"We will not be saved from global warming because of the emissions reduced by the coronavirus. So we have to do it in a systemic way," he said. 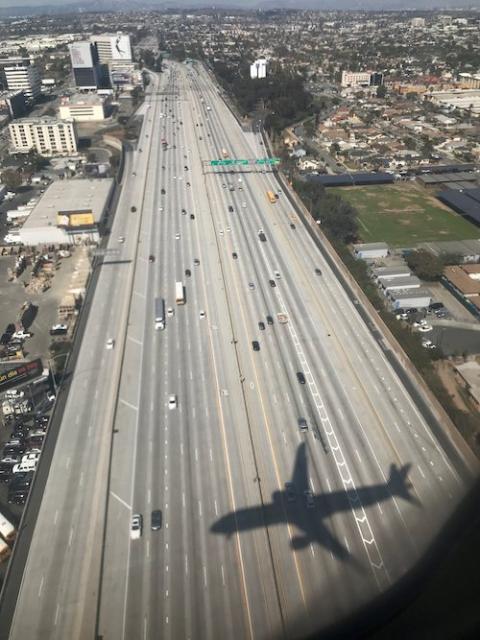 Vehicles on Interstate 405 in Los Angeles are seen from an airplane passing over the freeway March 1, 2018. (CNS/Reuters/Chris Helgren)

The annual U.N. Environment Programme emissions gap report, released the same day as the Vatican event, concluded that despite the year's sharp drop in emissions, at the current pace, global temperatures will rise by more than 3 C this century.

The U.N. agency urged countries to incorporate "green recovery" measures into stimulus legislation for recovery from the pandemic and to "raise significantly their climate ambitions" ahead of COP 26 in 2021. To meet the 1.5 C target, the report stated nations need to increase their emissions-cutting targets fivefold, while the richest 1% of the world population (defined as having annual incomes greater than $109,000) would have to reduce their carbon footprints by a factor of 30.

Several countries, including China, have announced more ambitious targets recently, as has U.S. President-elect Joe Biden. An analysis by the research group Climate Action Tracker showed that even if these pledges are met, warming would be reduced to 2.1 C — still short of the Paris goals, but "within striking distance" of the 1.5 C target.

Hindou Oumarou Ibrahim, an environmental activist with the Association of Peul Women and Autochthonous Peoples of Chad, described during the Dec. 9 webinar how climate change and COVID-19 are impacting Indigenous peoples and other vulnerable communities. The pandemic has exacerbated food insecurity, she said, and preventive health measures, such as frequent hand washing, are not possible for people without access to clean water, particularly nomadic groups, whose lives have been disrupted as borders have closed.

"Climate change is killing people. And it's displacing communities. It's making them homeless and migrants. So the sense of urgency has to be in the mind of all of us," she said.

Ibrahim added that the pandemic has shown how countries can respond to a crisis when they choose to do so, by both rapidly mobilizing to seek solutions and investing in them. The same response is required with climate change, she said. 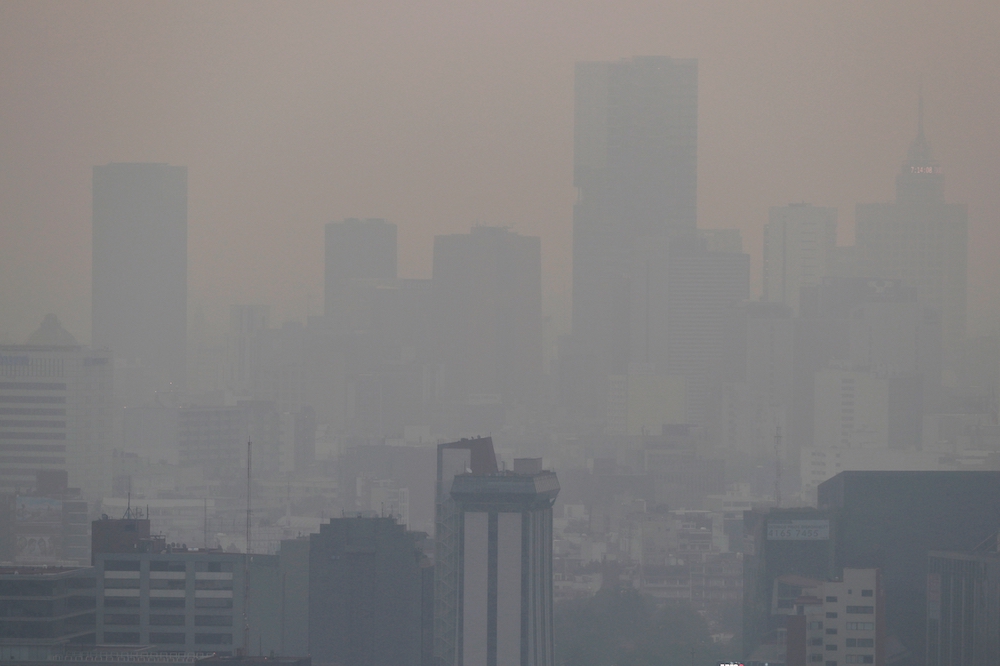 Mexico City is shrouded in smog in May 2019. (CNS/Reuters/Henry Romero)

She urged countries that are pumping billions of dollars into their economies to boost recovery to also fulfill their pledges to the Green Climate Fund, which has fallen fall short of its goal of delivering $100 billion annually to developing countries by this year.

"Why [can't they] shift and integrate climate change to their causes?" she said.

Turkson echoed Francis' repeated call for an ecological conversion. At one point, the cardinal was asked why Catholics do not hear in their dioceses and parishes the message about climate change and sustainable development that he and the pope have stressed.

"On the world stage, Pope Francis is admired, cherished and recognized for his moral authority" on environmental issues, Turkson said. "Now one would have thought that when a leader so speaks, all the followers would also kind of come on board."

The cardinal continued, "There appears to be some slight disconnect between the head and the body. So that while the pope speaks, it does not always resonate with every area of every part of the world. But that again is our task. That's our responsibility."

Turkson said the Vatican has held online conferences with bishops' conferences and Caritas chapters to try to elevate the message. He added that the Vatican has promoted a number of climate actions — including in operational guidelines for parishes and dioceses released in June — that Catholics can take, such as placing solar panels on churches, supporting green agriculture and planting trees through programs like the Laudato Tree Project in central Africa.

In May, Turkson's dicastery unveiled its Laudato Si' Action Platform, which invites Catholic institutions at all levels to implement seven-year plans toward "total sustainability" during this decade.

"Most importantly, the action has to be on the local level," Turkson said.

Schellnhuber, who co-authored a recent paper on the emissions-reducing potential of switching from concrete and steel to wood for building construction, said "it would be a very strong statement" if the Catholic Church committed to that model for its future buildings. The paper notes that such a move would require managing forests sustainably and protecting them from illegal logging and other threats.

Ibrahim said the solutions to climate change "are in our hands," but also require political leadership. She urged leaders to consult indigenous communities, who represent a small sliver of the global population but protect 80% of the world's biodiversity. And should politicians fail to lead, she said, faith groups must step in. 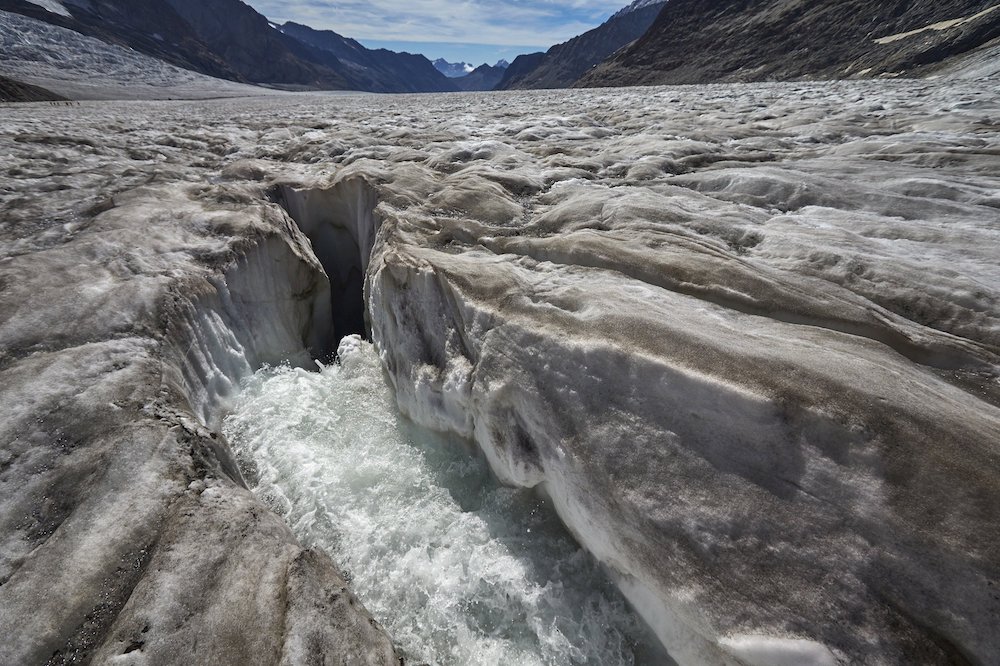 Water runs through a hole in the melting Aletsch Glacier in the Swiss Alps. (CNS/Reuters/Denis Balibouse)

Read this next: Five years after Paris, the ecological alarm is ringing loud and clear
A version of this story appeared in the Dec 25, 2020-Jan 7, 2021 print issue under the headline: Paris accord reaches 5 years.