Five years after Paris, the ecological alarm is ringing loud and clear

What did we learn from the pandemic that could foster more ambitious climate action? 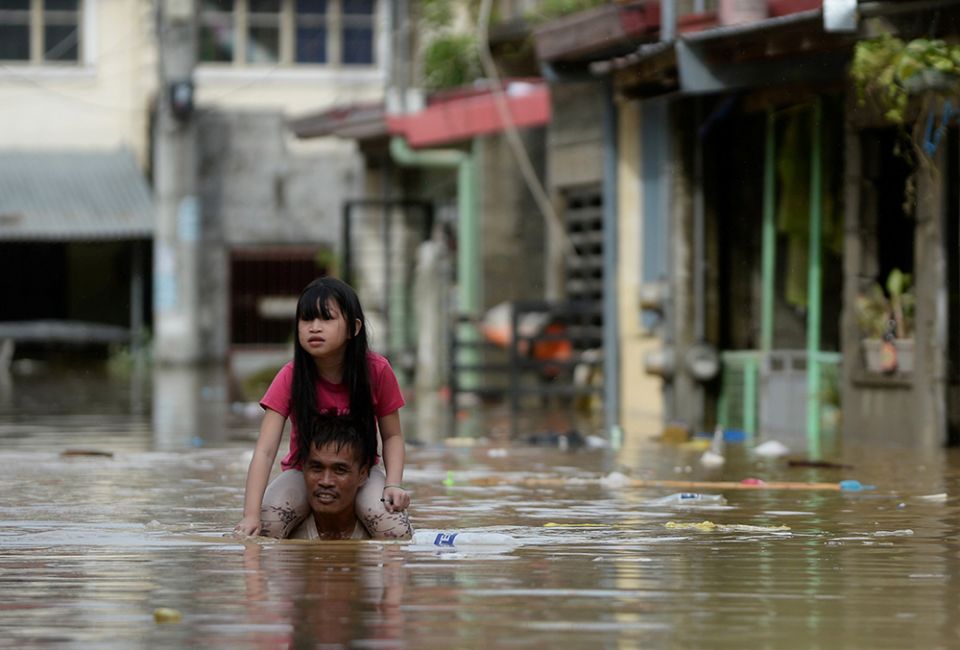 A man carries a child on his shoulders through a flooded street in Manila, Philippines, following Typhoon Vamco. (CNS/Reuters/Lisa Marie David)

Five years ago, the Paris Agreement was adopted by governmental leaders: a compromised result of long negotiations and worldwide public pressure. The Paris Agreement is not ideal, but it's an important tool to push governments to move from words to action.

Unfortunately, in the last five years, governments failed targets laid out on Dec. 12, 2015, and here we are today — on the eve of the Climate Ambition Summit, where governments are supposed to present their implementation plans (the so-called Nationally Determined Contributions, or NDCs) — to shout again that more ambitious and imminent steps are needed.

After months of coping with COVID-19, another ecological alarm is ringing loud and clear: The overexploitation of natural resources is having devastating long-term consequences. Indeed, we have a big job to do; despite the COP26 postponement, commitments and climate action cannot be delayed.

The lockdown measures in many countries "paused" business-as-usual: our economy, our consumption, our traveling, our frenetic lifestyles. Never before has industrial civilization taken such a "break." Some have been even "celebrating" the unusual decrease in emissions, but soon scientists warned us that this is just a tiny downturn on the long-term emissions graph. We need a sustained flattening of the curve to reach the Paris Agreement's goals. We need an entirely different movie, not just to press pause or play it in slow motion!

While we pause our lifestyles to slow during the COVID-19 crisis, it has been impossible to "pause" the permanent state of climate crisis lived by the world's most vulnerable and poorest communities. 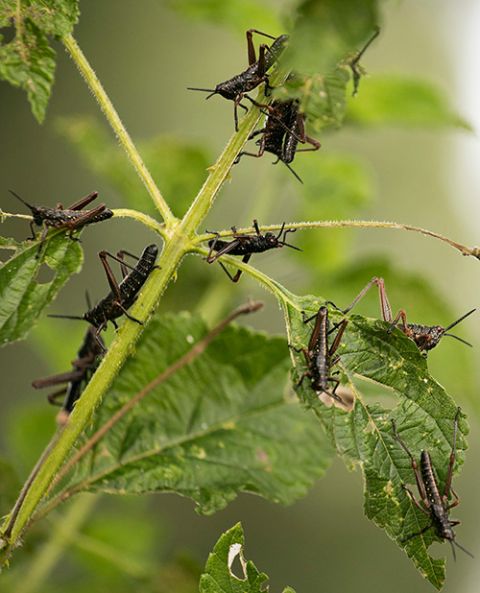 Locusts feed on a plant near the village of Riandira in Kirinyaga County, Kenya, Jan. 14. (CNS/Reuters/Baz Ratner)

The pandemic in 2020 was just one more threat to the hundreds of millions of people hanging by a thread because of floods, invasion of locusts, droughts and tropical cyclones. We should dedicate all the media space available to report those stories, often ignored. We will give them space here.

Five storms hammered the Philippines in 30 days between October and November: from Typhoon Molave (locally named Quinta) on Oct. 25 to Vamco (Ulysses) on Nov. 23, which came less than a fortnight after the season's strongest storm, Typhoon Goni (Rolly).

Throughout 2020, East Africa has been seeing its worst swarms of locusts in many decades, with devastating effects on agriculture and food security for the local population. The Brazilian Amazon rainforest is still on fire, with an increase of 13% in the first nine months of the year compared to last year.

What did we learn from the pandemic that could foster more ambitious and urgent climate action?

First of all, the health crisis confirmed the failure of the current dominant economic system. The pandemic outbreak of another zoonotic disease — such as COVID-19 — is one more example of the encroachment of human activity on nature's boundaries. The harmony in our relationship with creation is broken.

And, as we repeatedly stated within the Vatican COVID-19 Commission, created by Pope Francis to express the church's care for the whole human family facing the pandemic, there is no healthy humanity on a sick planet. Climate ambition must therefore restore a peaceful coexistence of nature and humanity on our planet.

Secondly, we have witnessed that governments have the power to halt certain economic activities to put the health of people first. In a year that started with a profound crisis of multilateralism and a lack of trust in intergovernmental cooperation, political leaders managed to find historic compromises during the COVID-19 emergency, such as the European recovery fund.

In our rich societies, the restrictions of the lockdown brought many of us to discover a more sustainable way of living, supporting local food production, avoiding useless traveling, caring for each other by offering neighborly services to the quarantined and the sick, and showing solidarity online, on balconies, and in protests. 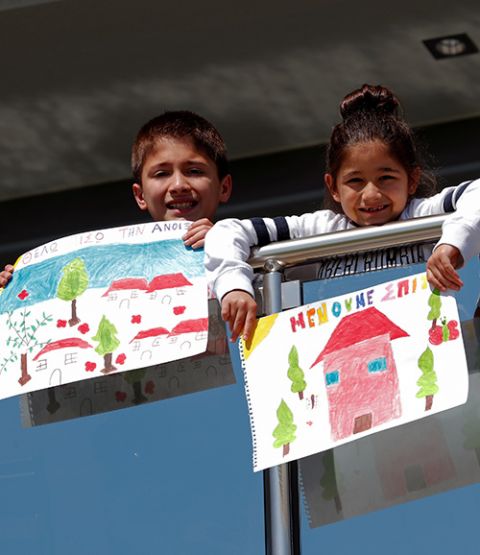 Children display their drawings from the balcony of their home in Thessaloniki, Greece, April 18, during the COVID-19 pandemic. The drawings in Greek read: "I want spring back" and "We stay home," Greece's national slogan during the pandemic. (CNS/Reuters/Murad Sezer)

Climate ambition therefore means moving toward a more sustainable way of living "so that others could simply live."

We also learned that the most essential work in our globalized civilization, such as food production, health care, education, the manufacturing of essential goods, and the preservation of our ecosystems, is borne by the most disempowered people — often women, people of color and indigenous communities.

The people daily paying the price of inequalities are also the most vulnerable to climate change. Climate ambition therefore means protecting the rights of and empowering the most vulnerable, as well as learning from their traditional knowledge and spirituality of care for creation.

Many policy proposals to address the pandemic were clearly guided by economic interests and foundationally ignored the common good. These measures simply aimed to "go back to normal," instead of building back better, instead of preparing to be resilient to future crises.

And today, five years after the Paris Agreement was adopted, we will not tolerate wasting any more time or accepting long-term promises. The new normal must start now. We cannot come out of a global crisis as we were before and miss the opportunity to change course. We cannot miss the momentum: We clearly see the systems behind the crisis. Siloed environmental, economic or health reforms will not tackle the root causes of the problem.

We need a clear, holistic approach, policy coherence across sectors and at all levels, that can join forces to shape a new paradigm where people and planet are the central priority. Because we know that the path we were going on full speed is just perpetuating inequalities and ecological collapse.

So where do we stand today on our road map to 2030? There are steps toward the Paris goals to celebrate (for example, efforts on divestment from fossil fuels by many institutions, bans on single-use plastic in some regions, the initiation of processes towards "green deals," based on a vision of interconnectedness across different agendas, etc.).

In many of these, local actors clearly played a key role. This is a sign that change can only happen if local communities are leading or participating.

Unfortunately, science is telling us that too little has been done — and too slowly — to truly confront the climate crisis, especially in the most vulnerable regions. We have almost reached a mean temperature increase of 1.2 degrees Celsius globally.

While measures for a just and sustainable recovery are debated, "growth at all costs" remains the mainstream mentality of the majority of political leaders, and societies remain trapped in a "throwaway culture."

Today, and this coming year, is an opportunity, while we build plans for a just and sustainable post-COVID-19 recovery, to assess where each country's commitment stands, to look at those 2015 agreements and honor the Paris commitment.

The moral call to conscience at this moment could truly bring about an unprecedented decade of transformation. These are the essential ingredients for true ambition:

It's complex, but it's possible. It is our responsibility to hold leaders accountable for the implementation of their climate action.

Five years ago, in the streets of Paris, we learned that it's crucial for all of us — for civil society movements, church actors, communities, youth, media and scientific bodies — to work together to contribute to bringing about a decade of restoration toward 2030, a decade of jubilee, a decade that can inspire, can empower change, a decade that has already started.

Commentary | Five years after Paris, the ecological alarm is ringing loud and clear