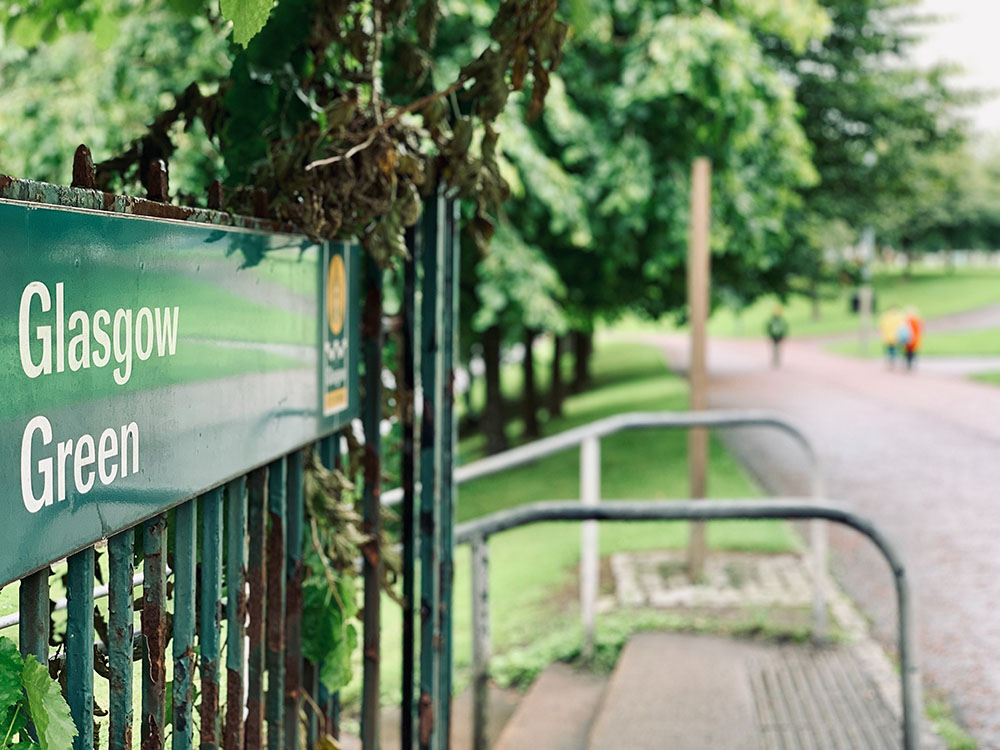 Glasgow Green at the Kings Bridge entrance to the park in Glasgow, Scotland. The city is hosting the United Nations climate conference known as COP26 on Oct. 31-Nov. 12. (Unsplash/Phil Reid)

Editor's Note: This story was updated at 2:45 p.m., central, with comments from a divest-invest webinar held Oct. 26.

As Scotland prepares to host a critical global summit on climate change, the country's Catholic Church has divested its financial holdings from fossil fuels, which have powered decades of industrial growth but are also driving Earth's temperatures to dangerous levels.

The Catholic Bishops' Conference of Scotland, along with all eight Scottish archdioceses and dioceses, announced their fossil-free commitment Oct. 26, just days before the United Nations climate conference known as COP26 will begin in Glasgow. That city's mayor also announced divestment plans the same day.

The Scottish Catholic Church was among 72 faith institutions on six continents that announced their divestment plans as part of a joint effort organized by several environmentally focused religious coalitions. Thirty-seven of them — representing Anglican, Buddhist, Catholic and Protestant traditions — are in the United Kingdom, which is leading COP26 jointly with Italy.

Together, the divesting faith communities manage more than $4.2 billion in assets, according to organizers, who said the Oct. 26 announcement was the largest religious-based divestment to date.

Galloway Bishop William Nolan, head of the Scottish bishops' commission for justice and peace, which leads environmental initiatives, said in a statement, "The world is full of voices decrying the environmental crisis that we face."

He said the bishops decided to join the multitrillion-dollar worldwide divestment movement because "speaking out is not enough, action is required." Although some people argue that fossil fuel companies are necessary in the transition to renewable energy, he said, the act of divesting sends a signal "that the status quo is not acceptable." 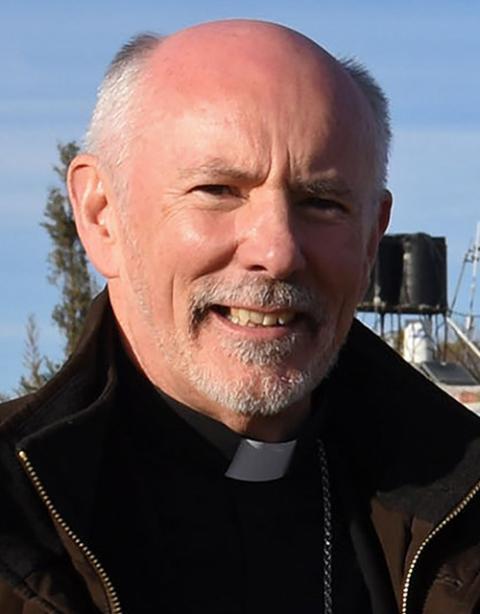 "Given the harm that the production and consumption of fossil fuels is causing to the environment and to populations in low-income countries, it was not right to profit from investment in these companies. Disinvestment is a sign that justice demands that we must move away from fossil fuels," the Galloway bishop said.

Negotiations at COP26 are expected to center on meeting the Paris Agreement goal of limiting average global temperature rise to 1.5 degrees Celsius and push countries toward sizable actions to shift rapidly from fossil fuels to renewable energy during this decade.

Before the U.N. climate summit begins, leaders of the G-20 nations, which produce 80% of global greenhouse gas emissions, will try again to reach agreement on end dates for fossil fuel subsidies and a full phaseout of coal.

A May report from the International Energy Agency, originally founded to protect oil supplies, stated that countries must immediately halt new oil, coal and gas development in order to achieve net-zero emissions by 2050 and ultimately limit global warming to 1.5 by the end of the century.

COP26 must send "an unmistakable signal" to the financial world that the era of fossil fuels is ending, International Energy Association executive director Fatih Birol told a Catholic webinar in July.

An analysis this week by Bloomberg found that banks have facilitated nearly $4 trillion in financing for coal, oil and gas since the Paris Agreement was adopted in December 2015. So far in 2021, banks have provided $459 billion in fossil fuel financing, though perhaps in a sign of a shift, that's been slightly surpassed by $463 billion in green investments.

Meanwhile, the divestment movement has mobilized more than 1,485 institutions with combined assets of $39 trillion away from investments in the fossil fuel industry. Recent additions include Harvard University — whose $42 billion endowment has long been a target of divestment advocates — and philanthropic giants MacArthur Foundation and Ford Foundation, the latter founded by the son of American auto pioneer Henry Ford.

During a webinar Oct. 26, leaders on divestment described the rapid growth of the campaign, which as of 2014 included just 181 institutions representing $50 billion in combined assets, as one of the biggest success stories of the climate movement. Looking forward, they called on investors not only to divest but to direct at least 5% of assets toward climate solutions and press companies in their portfolio to reduce total emissions to net zero by 2050.

"What we all know was once a movement led by small churches and liberal arts colleges is now a movement that's been embraced by the biggest and most influential investors in the whole world," said Richard Brooks, climate finance director for Stand.earth, listing the Vatican among them.

Salesian Fr. Joshtrom Kureethadam, coordinator of the ecology and creation sector of the Vatican Dicastery for Promoting Integral Human Development, said in the webinar "we are delighted that the faith communities are leading this transformative journey."

The Vatican has become increasingly vocal about the need to shift the world, and its investments, away from fossil fuels and toward renewable and sustainable sources of energy. Kureethadam said it has supported divestment through several initiatives, including recommending the step in its implementation guidelines for Pope Francis' encyclical "Laudato Si', on Care for Our Common Home." Its forthcomng Laudato Si' Action Platform also encourages Catholic institutions to end financing for coal, oil and gas, of which the vast majority of those reserves, the priest added, need to remain in the ground in order to achieve the Paris climate goals.

"The challenge is huge, but people are coming together, and we faith communities are willing to play our part on this journey," Kureethadam said.

Thirty-six Catholic institutions were part of the latest in a series of joint divestment announcements, which have been coordinated since 2016 by a campaign of the Laudato Si' Movement (formerly the Global Catholic Climate Movement).

The new divesting Catholic groups include 10 religious orders, five of them in the U.K.; Caritas Nepal; the justice and peace office of the Sydney Archdiocese; the Archdiocese of Cashel and Emily, Ireland; and the IDEPAS Peru health institute.

In addition, 18 local churches and one religious order of the Greek Catholic Church in Ukraine pledged that their investments will be fossil free.

Five Catholic organizations in the U.S. were part of the announcement, including the Midwest Province of the Jesuits; the Benedictine Sisters of Erie, Pennsylvania; and the University of St. Thomas in St. Paul, Minnesota.

Two other U.S. Catholic universities — the University of San Diego and Loyola University Chicago — committed to divesting in the weeks before the joint faith announcement.

The University of San Diego's new investment policy outlines plans to shed fossil fuel holdings from its $818 million long-term investment pool, which includes its $693 million endowment, by 2035 — the year the university has committed to become carbon neutral.

Since 2016, the university has reduced its exposure to fossil fuels from over 9% to 3% and directed $60 million toward investments that take environmental, social and governance, or ESG, considerations into account, chief financial officer Katy Roig said.

She told EarthBeat that the university revised its investment policy to align it with Laudato Si', and the document now includes passages from the encyclical, including that climate change is happening and disproportionately affects already disadvantaged communities.

At Loyola University Chicago, students and faculty have pressed for divestment for years, with the student government passing a resolution in February 2020 that called for the Jesuit school to rid its $1.6 billion endowment of fossil fuels. That move finally came in October, with the university's new sustainable investment policy that also directed its financial managers to integrate environmental, social and governance considerations into its decisions.

Poorvi Modi, a senior who served as the student representative on the investment policy committee of the board of trustees, said she was "really satisfied" with the university's decision.

"The student demand was just for divestment from fossil fuels, and we took that a step forward by making it a whole ESG consideration," she said. Modi added that having a student on the committee improved communication with students and ensured that their perspective was represented in the deliberations.

Katie Wyatt, Loyola chief investment officer, told EarthBeat that the policy "has been a work in progress for a long time."

It was accelerated, she added, by a request for the board's committees to review a document from the Jesuits' Midwest Province, called "Go Forth!", that focused on applying the order's apostolic preferences, including caring for our common home, to all dimensions of higher education.

"What we're really trying to achieve here is an investment policy consistent with the whole of Jesuit mission and values," she said.