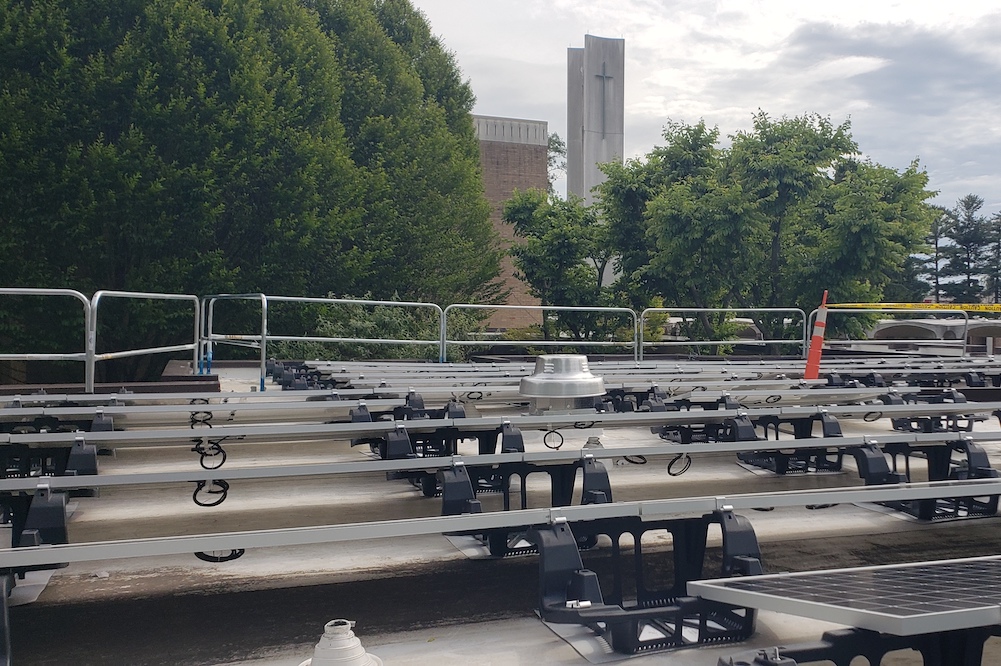 In July, a 421-kilowatt solar system was installed at St. Anthony of Padua Catholic Church, in Falls Church, Virginia. The rooftop solar array is projected to offset almost 90% of the parish's energy use and save it upwards of $1.3 million over 25 years. (Catholic Energies)

A quick scan of the parishes and groups partnering with Catholic Energies reveals a noticeable geographic pattern: Virginia is a growing hotbed of solar activity.

Last month, three parishes in the Arlington Diocese powered up new solar installations, each developed and financed through Catholic Energies, the burgeoning program of the Catholic Climate Covenant that helps church institutions find outside funding to take on energy initiatives without the initial burden of hefty upfront costs.

With the new installations, the parishes — St. Anthony of Padua Catholic Church in Falls Church, St. Bernadette Catholic Church in Springfield and Nativity Catholic Church in Burke — will collectively offset the carbon dioxide emissions produced by powering 3,500 homes for a year or burning 15,000 tons of coal. Just as attractive to their finance councils, the solar projects came at no cost and forecast sizeable savings.

At St. Anthony of Padua, the 421-kilowatt rooftop solar system — the largest of the three parishes — is expected to cover almost 90% of the parish's energy demand. The solar panels, along with LED lighting upgrades, are projected to save St. Anthony upwards of $1.3 million over the 25-year term of the power purchase agreement.

The rooftop panels at Nativity are part of several green initiatives under way at the parish. Its creation care ministry has also begun a community vegetable garden, and its school is developing an outdoor learning space with native plants and species. In bulletins this summer, the ministry team and pastor Fr. Robert Cilinski included reflections on "Laudato Si', on Care for Our Common Home" to mark the fifth anniversary of Pope Francis' encyclical. While the panels will save the parish money — more than $200,000 — they also reflect Christian values to safeguard creation.

"Our solar panels are on the rooftop shouting the wisdom of Laudato Si', the social teaching of the church," Cilinski recently told the Arlington Catholic Herald, the diocesan newspaper.

With each Richmond parish, none paid any upfront costs, an arrangement made possible by Catholic Energies.

The program first works with groups to determine if solar is a fit, then seeks funding, primarily through power purchase agreements. In those deals, an outside investor finances the project and sets a fixed rate for energy usage, often lower than local utility rates, which is paid directly to the investor.

Since launching in fall 2017, Catholic Energies has completed 11 solar projects in the past 13 months. Eleven more are under contract and expected to be completed by the end of 2020. By then, the program will have footprints in eight states, along with Puerto Rico and Washington, D.C.

But the biggest business for Catholic Energies so far has been the region around Virginia. Of the 22 solar installations in all it expects to have completed by the end of the year, 10 are in the Old Dominion and two are in the Washington, D.C., area, where it is also working to finalize contracts with three more Catholic clients.

The completed projects include the 2-megawatt solar installation for Catholic Charities of the Archdiocese of Washington, the largest solar project in the city and to date the largest completed by Catholic Energies, which is based in the District of Columbia. The array's 5,000 panels began producing power in April. Since then, the electricity it has generated from the sun has offset roughly 1 million pounds of carbon emissions, or the equivalent of planting 25,000 trees, according to Catholic Energies. 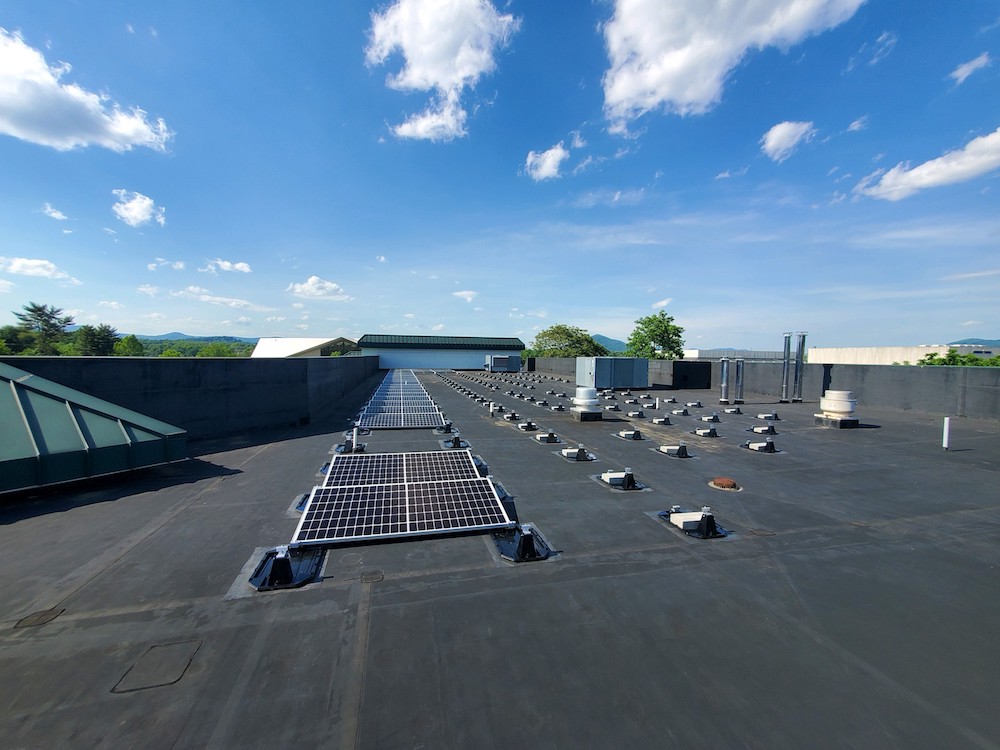 Roanoke Catholic High School, in Roanoke, Virginia, installed 155 solar panels on its roof in June. The school, part of the Richmond Diocese, worked with Catholic Energies on the system, which is expected to save $250,000 in energy costs over 20 years. (Catholic Energies)

The first Catholic Energies project was also in Virginia, at Immaculate Conception Parish in Hampton, in the Richmond Diocese. Since then, the pursuit of solar power has spread to other parishes in the diocese, with two more parishes completing solar projects and five more set to begin construction in the next month. All were developed with Catholic Energies, which is also in early discussions with the diocese about possibilities for larger, utility-scale projects.

So why are Virginia parishes turning to solar?

Page Gravely, Catholic Energies executive vice president for client services, told EarthBeat the biggest factor has been support at the diocesan level. He said the leadership has recognized the economic benefit of reducing energy costs and also sees that adopting renewable energy can represent faith in action.

Catholic Energies worked with each diocese to streamline the process for evaluating whether solar might work and, if so, obtaining approval. The ultimate decision still rests with each individual parish, school or organization. In the Richmond Diocese, which spans three-fifths of the state, the chancery took the lead in creating a template power purchase agreement for interested parishes. After parish committees sign off on a project, it is presented to the diocesan building and renovation committee.

"I think that gave them all a lot of comfort, knowing that the diocese really stood behind them and supported it if they chose to do it. And that got a lot of parishes engaged with this at the same time," Gravely said.

Charles Mikell, real estate director for the Richmond Diocese, aims to get at least 30% of the 146 parishes running on solar power. At least 15 more parishes are exploring their options. He said the diocese sees the efforts as in line with Pope Francis' guidance urging the church to reduce its carbon footprint. But they also see savings in the numbers.

"If we can come up with a simple way and it costs the parishes almost nothing out of pocket, and they can save thousands and thousands of dollars a month, it's kind of a no-brainer," Mikell said.

Dan Last, Catholic Energies program manager, told EarthBeat in an email that two factors are critical in determining a potential project's financial viability: current energy costs and available solar incentives. For coastal states, the higher average energy costs provide added incentive for solar, as the savings can be considerably more than in regions with lower energy rates, like the Midwest. More attractive solar incentives typically also are found on the East and West Coasts.

Embrace of solar energy in Virginia is relatively new. The Solar Energy Industry Association (SEIA) ranked Virginia 18th nationwide in 2020, with the state tapping the sun for roughly 1% of its electricity. But the industry group ranked the state sixth for projected growth over the next five years.

One reason is the Virginia Clean Economy Act. Signed by Gov. Ralph Northam in April, the legislation requires the state to achieve net-zero carbon dioxide emissions by 2050 and calls for 16,100 megawatts of solar and onshore wind energy. The law also expands net metering — where owners of solar grids receive a credit for the energy their system produces — to encourage more rooftop solar.

Solar has also gotten a boost in Virginia from companies like Amazon and Microsoft, which have lobbied for renewable energy to power data centers they're building in the state. Together, those factors have Virginia "poised to continue to grow," Gravely said.

What remains unknown is how big a dent the coronavirus pandemic will make in the solar industry. SEIA, the industry association, projects a 31% decline this year in commercial or residential installations, and the potential for "significant disruption" remains.

For Catholic Energies, the pandemic has had a mixed effect. In some cases, parishes accelerated their pursuit of solar, seeing the savings in energy costs as critical as donations tightened with churches closed and collection plates idle. But the financial uncertainty has led others to delay projects.

Nevertheless, Mikell of the Richmond Diocese said lowering energy costs has become more attractive in the COVID-19 era, as parishes seek to make up for lost revenues.

"Any amount of saving could help a parish," he said.