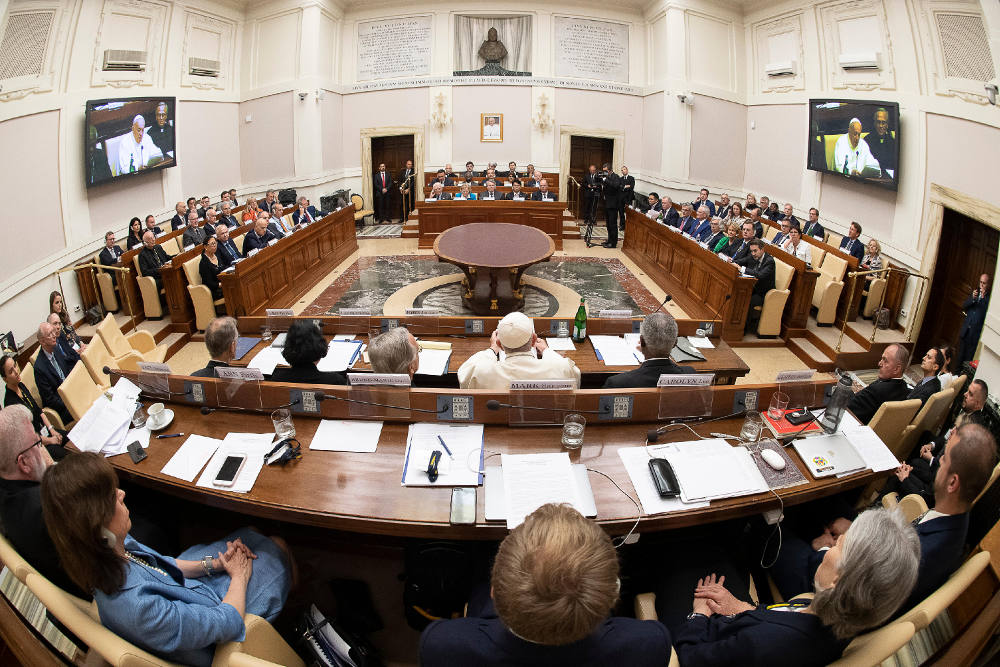 Pope Francis speaks to executives of leading energy, petroleum and natural gas companies, leaders in investment firms and climate scientists during a meeting at the Vatican June 14, 2019. "Today's ecological crisis, especially climate change, threatens the very future of the human family, and this is no exaggeration," he told them. (CNS photo/Vatican Media)

Faced with a climate emergency, the world must act immediately to mitigate global warming to 1.5 degrees Celsius and avoid committing "a brutal act of injustice" on the poor and future generations, Pope Francis told a group of energy and oil executives and global investors, who in their own statement offered support for a price on carbon emissions.

"Time is running out! Deliberations must go beyond mere exploration of what can be done and concentrate on what needs to be done from today onward," he said.

"We do not have the luxury of waiting for others to step forward or of prioritizing short-term economic benefits. The climate crisis requires our decisive action, here and now," he said June 14 at the Vatican.

The pope spoke to leaders taking part in a conference June 13-14 on "Energy Transition and Care for Our Common Home," sponsored by the Vatican Dicastery for Promoting Integral Human Development and the University of Notre Dame's Mendoza College of Business in the United States. Holy Cross Fr. John Jenkins, president of Notre Dame, attended the gathering.

In a press release from the human development dicastery, Jenkins said that the leaders in attendance will collectively influence the planet's future "perhaps more than any in the world," adding "I am deeply grateful for their commitment to the transition to a low carbon future while providing the energy needed to support the integral human development of every member of the human family."

It was the second private meeting — the first was in June 2018 — aimed at dialogue with invited executives of leading energy, petroleum and natural gas companies, global investment firms, climate scholars and academics.

In a statement, a group of 31 energy and investment executives, sustainability leaders and energy and climate experts who participated in the conference agreed that governments should set "reliable and economically meaningful carbon pricing regimes … to significantly advance the energy transition while minimizing the costs to vulnerable communities and supporting economic growth."

ExxonMobil, the world's largest public oil and gas company, has endorsed a carbon tax in the past, most recently last fall when it pledged $1 million to back a carbon tax in the United States. Critics have pointed out that as part of Exxon's proposal would limit the company — which has been accused of knowing of the impacts of climate change for decades and keeping the information hidden — from future climate-related lawsuits. At the same time, Exxon in the past year has announced plans to increase its oil and natural gas production from 4 million barrels per day to 5 million by 2025. 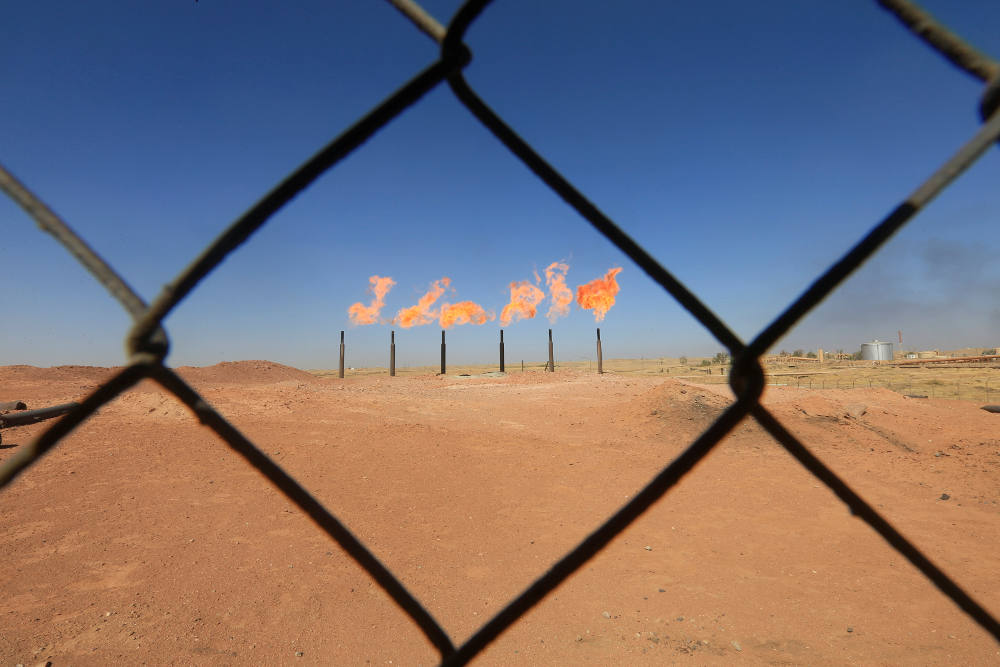 An oil field near Kirkuk, Iraq, is seen Oct. 17, 2017. Faced with a climate emergency, the world must act immediately to mitigate global warming and avoid committing "a brutal act of injustice" on the poor and future generations, Pope Francis told a group of energy and oil executives and global investors June 14 at the Vatican. (CNS photo/Alaa Al-Marjani, Reuters)

In a second statement, the energy and sustainability officials also agreed that energy companies should disclose information about strategy and risk management as it relates to climate change and "provide clarity for investors about how they are planning and investing for the energy transition." Along with that, they said it was important for board directors to "assess climate-related issues as part of their risk oversight function, as well as management's role in evaluating and addressing these issues." In 2017, religious investors were among Exxon shareholders who overwhelmingly supported a resolution requring the energy giant to produce an annual report of the long-term impacts on its oil and gas reserves from global climate policies.

"Undeniably, the Earth is a single system and humanity is a single whole. This requires a new level of cooperative leadership, trust-building, and commitment. We embrace this challenge," the conference participants wrote.

In a statement following the conference, Campanale, whose Carbon Tracker non-profit analyses the financial impact of the energy transition and the remaining "carbon budget," said he welcomed the pope's "intervention at this critical time, not least because we, in concert with concerned investors, recognise that time is running out to restrict warming to well below 2°C."

Campanale said it was important that energy companies and large invesment firms endorsed a price on carbon and the discloure of company information related to the energy transition.

"We must forego business-as-usual protocols and short-term market-driven goals or face environmental and financial ruin of catastrophic proportions.  Oil and gas companies have a crucial role to play in transitioning to low-carbon economy but must today collectively take those hard decisions in the wake of determined investor and public pressure, and unambiguous scientific evidence," he said.

Francis thanked participants for returning for the second meeting, saying it was "a positive sign of your continued commitment to working together in a spirit of solidarity to promote concrete steps for the care of our planet."

The dialogue was taking place during a "critical moment," he said, because "today's ecological crisis, especially climate change, threatens the very future of the human family, and this is no exaggeration."

"For too long, we have collectively failed to listen to the fruits of scientific analysis and 'doomsday predictions can no longer be met with irony or disdain,'" he said, citing his encyclical "Laudato Si', on Care for Our Common Home."

It would be grossly unfair for future generations to inherit "a greatly spoiled world," the pope said. "Pardon me if I want to underline this: They, our children, our grandchildren, should not have to pay, it is not right that they pay the cost of our irresponsibility."

All dialogue and action must be rooted in the best scientific research available today, he said, pointing particularly to last year's special report by the Intergovernmental Panel on Climate Change.

"That report clearly warns that effects on the climate will be catastrophic if we cross the threshold of 1.5 degrees Celsius" above pre-industrial levels, as outlined in the Paris Agreement goal, the pope said.

The report, which outlined detailed ways to limit global warming, warned that "only one decade or so remains in order to achieve this confinement of global warming," he added.

"Faced with a climate emergency," the pope said, "we must take action accordingly, in order to avoid perpetrating a brutal act of injustice toward the poor and future generations. We must take responsible actions bearing in mind their impact in the short and in the long term."

Recognizing that "civilization requires energy," he said that it is also important that energy use not destroy civilization.

"A radical energy transition is needed to save our common home," he said, and the Catholic Church was "fully committed to playing her part."

"There is still hope and there remains time to avoid the worst impacts of climate change, provided there is prompt and resolute action," he said.