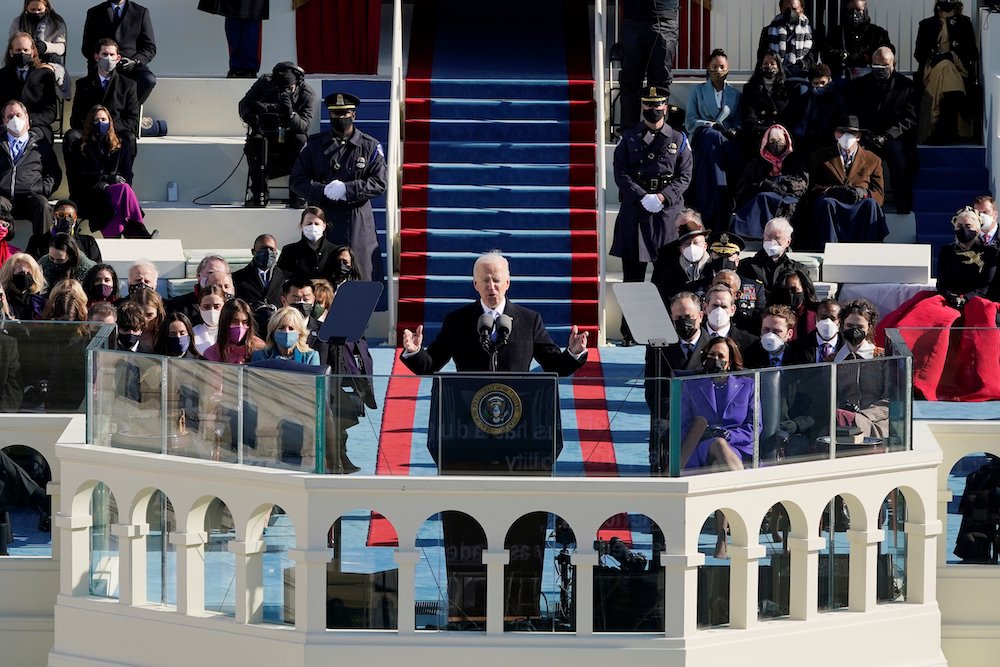 Editor's note: This story has been updated with additional comments from bishops and Catholic Relief Services.

In one of his first acts in office, President Joe Biden began the process for the U.S. to rejoin the Paris Agreement on climate change and to reestablish the scores of environmental regulations undone by his predecessor in the Oval Office.

Biden, seated at the Resolute Desk in the West Wing of the White House, signed the notice to re-enter the Paris accord Jan. 20 just hours after taking the oath of office. It was later deposited with the United Nations, and under the agreement, will take effect in 30 days, or Feb. 19. The U.S. will also have to submit a new greenhouse gas emissions-reduction plan.

"We're going to combat climate change in a way that we haven't done so far," Biden said.

The U.S. return to the Paris Agreement "recasts our global solidarity to act with all other nations to address the human-made climate emergency," Mercy Sr. Áine O'Connor, a member of the Mercy Sisters' leadership team, told EarthBeat in an email.

O'Connor said the country must begin an immediate transition to clean energy, including an end to fossil fuel subsidies, and that ceasing fossil fuel use by 2030 "must be the United States' unequivocal response and responsibility."

Biden also signed an executive order directing executive branch departments and agencies to review and address federal actions and regulations issued by former President Donald Trump that are deemed harmful to public health, damage the environment or were not supported by sound science.

The order directs agencies to revise relaxed standards for fuel economy, methane emissions and energy efficiency for buildings and appliances; reestablishes an interagency working group to determine the social cost of greenhouse gas emissions; and revokes the permit for the Keystone XL transnational pipeline. 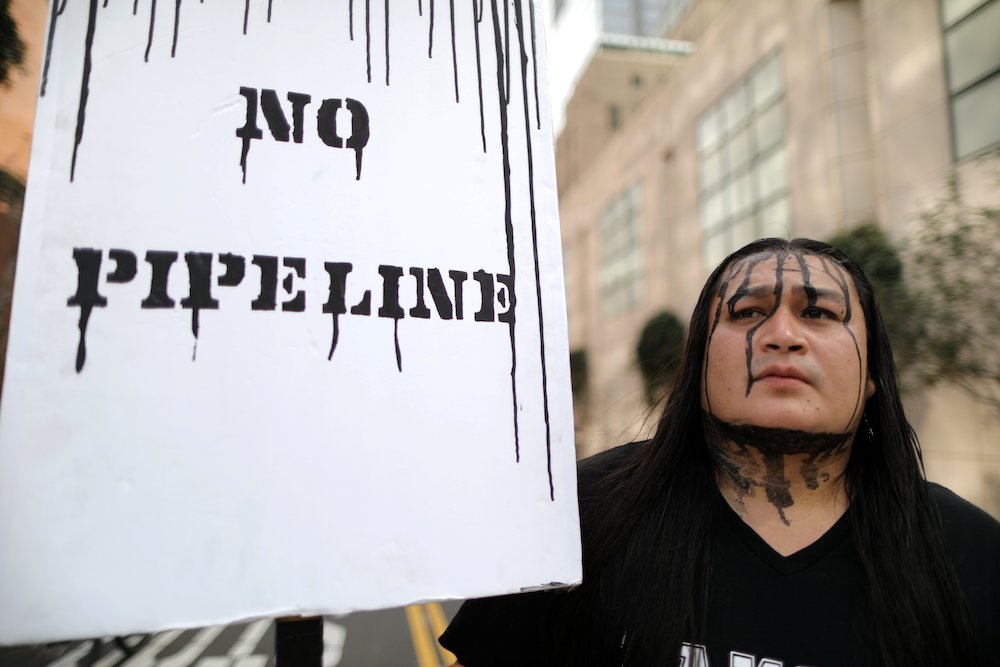 The new president, the nation's second Catholic commander-in-chief, also placed a temporary moratorium on all oil and gas leases in the Arctic National Wildlife Refuge and called for a review of the boundaries of several national monuments, which were loosened by Trump. They include Bears Ears, in southern Utah, which numerous Native American tribes consider sacred land.

The executive order was among 17 directives signed by the president, all aimed at undoing policies enacted under Trump, who left Washington, D.C., earlier in the day and did not attend the inaugural events.

At the signing, Biden said the executive orders are starting points, and that accomplishing the full scope of his plans will also require legislation.

"I think some of the things we're going to be doing are going to be bold and vital. And there's no time to start like today," he said.

The new White House website, revamped for the Biden administration, listed climate among its immediate priorities. That marks a stark contrast from Trump's first day as president four years ago, when the White House, later followed by other departments, wiped the words "climate change" from its digital pages.

Dan Misleh, executive director of the Catholic Climate Covenant, welcomed the U.S. return to the Paris accord and the Biden administration's "bold plans" to reduce greenhouse gas emissions.

"We look forward to administrative and legislative actions that lead to a better future for our children that includes cleaner, safer sources of energy, good-paying clean energy jobs, less carbon pollution that contributes to climate change, and cleaner air and water for all," including low-income communities and those most vulnerable and historically exposed to pollution, Misleh said in a statement.

Susan Gunn, director of the Maryknoll Office for Global Concerns, likewise pledged to work with the new president "to promote justice, peace, and the integrity of creation, as our faith calls us to do."

"Today marks an opportunity to begin anew," she said.

On Jan. 20, Gina McCarthy, Biden's domestic climate adviser, told reporters the executive orders "will begin to put the U.S. back on the right footing" and position the nation again to become a global leader on climate change and clean energy.

The incoming Biden administration got an assist from a federal appeals court Tuesday that struck down the Trump administration's emissions rule for power plants, which had been an effort to roll back the Obama-era Clean Power Plan. The ruling is expected to make it easier for the U.S. Environmental Protection Agency under Biden to regulate emissions from power plants run on fossil fuels.

Biden followed Biden in cancelling the Keystone XL pipeline a second time, after Trump greenlit the project in his first months in office. The move by Biden was celebrated by environmental groups and tribal leaders as a victory, while union leaders and Canadian officials criticized it as a missed economic opportunity.

Joye Braun, a member of the Cheyenne River Sioux tribe and community organizer with the Indigenous Environmental Network, in a statement praised the Keystone decision and urged Biden to also block the Dakota Access and Enbridge Line 3 pipelines.

Several groups applauded the first executive orders while pressing Biden to do more. The Climate Justice Alliance called on the Biden-Harris administration to rebuild the economy with equitable measures for those most impacted by fossil fuel pollution. Amazon Watch urged the U.S. to make protecting the South American rainforest and its defenders a high priority.

And the youth-led Sunrise Movement encouraged Biden to embrace his "FDR moment" — a reference to New Deal champion former President Franklin Roosevelt — and mobilize the entire federal government to deliver on his ambitious climate action and environmental justice proposals without succumbing to pressures in Congress to water it down.

Los Angeles Archbishop José Gomez, president of the U.S. Conference of Catholic Bishops, said he looks forward to working with Biden on shared concerns, including care for the environment, though his statement focused mainly on their differences on abortion. In recent weeks, U.S. bishops' conference staff have met with members of the Biden transition team to discuss points of convergence around climate and environmental justice.

In a reflection released before the inauguration ceremony, Bishop John Stowe, episcopal president of Pax Christi USA, said that in reentering the Paris Agreement, the country "will once again take seriously the threat of global climate change."

In his inaugural address, Biden said that "a cry for survival comes from the planet itself, a cry that can't be any more desperate or any more clear." While not a direct quote, the line echoed Pope Francis' call, in his 2015 encyclical "Laudato Si', on Care for Our Common Home," for an ecological approach that responds to "the cry of the earth and the cry of the poor."

The Rev. Susan Hendershot, president of Interfaith Power & Light, said in a statement that religious congregations "hear that cry" and called the climate crisis "one of the defining moral issues of our time."

Biden called this "a time of testing" for the country, as it faces four simultaneous crises that he emphasized throughout his campaign: the raging coronavirus pandemic, economic inequality, systemic racism and climate change.

"Any one of these would be enough to challenge us in profound ways, but the fact is we face them all at once, presenting this nation with one of the gravest responsibilities we've had. Now we're going to be tested. Are we going to step up, all of us?" he said.

"I believe we must. I'm sure you do as well," the president added. "I believe we will. And when we do, we'll write the next great chapter in the history of the United States of America, the American story."