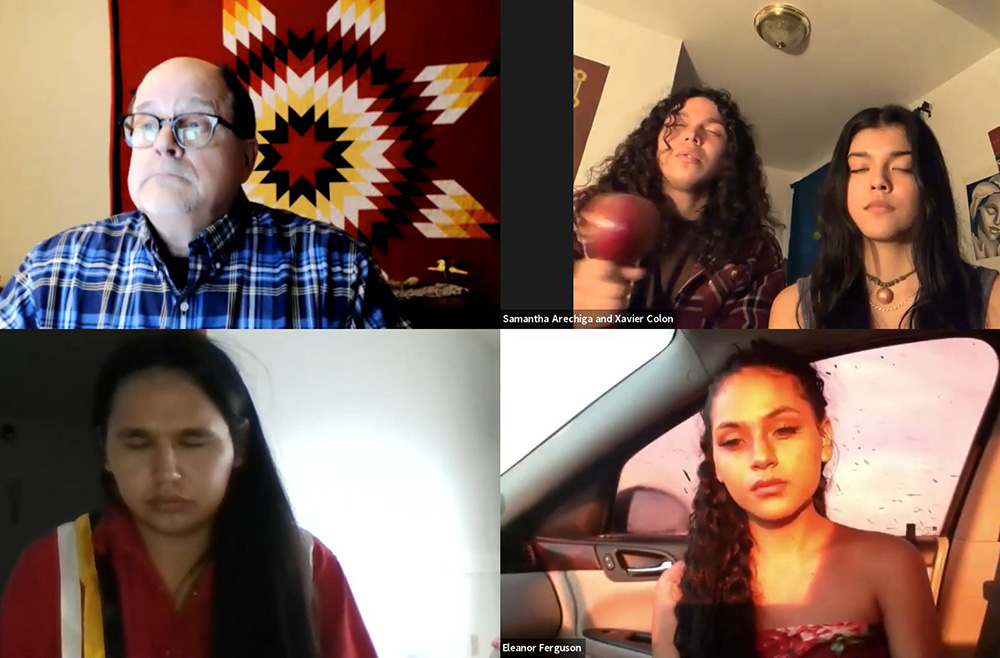 Back in September 2016, when the standoff at Standing Rock against the Dakota Access Pipeline was in its early stages, Chief Arvol Looking Horse, a spiritual leader of the Lakota Sioux, held a ceremony where he deputized the youth there as akicita, or "special protectors of the people."

The rare gesture of honor and trust from elders to the young lit a fire. Soon after, Native youth organized themselves as the International Indigenous Youth Council, and they took the lead in nonviolent actions opposing the pipeline. From Standing Rock, the council expanded to form chapters of protectors of the Earth and Indigenous culture across the country, which they call part of Turtle Island, the name given to the land in many Native American creation stories.

Members of the International Indigenous Youth Council took center screen Wednesday night at the annual climate change conference at Loyola University Chicago, held online instead of in person because of the coronavirus pandemic. All week, young activists like them have logged on to share their stories, artwork and resolve in addressing climate change and the dire environmental threats facing their communities and the planet.

"We're dealing with the ramifications of imperialism and colonialism, and we're working to be sort of the combatants to all of that and get our people back to our [traditional] diets, our structures, everything that we had," said Wanbli Ceya, a songwriter and member of the Oglala Lakota based on the Pine Ridge Reservation in South Dakota.

The climate change conference has been a staple of the academic calendar at Loyola Chicago since 2015. This year marked the first under the banner of the School of Environmental Sustainability, a new designation since December after the school spent its first seven years as a campus institute.

The 2021 conference picked up where it had hoped to begin last year. The 2020 gathering, which also was to spotlight youth activism, was canceled a day before its scheduled start, as lockdowns in Chicago and around the country were announced in a nationwide effort to contain the spread of the novel coronavirus.

The same theme of "Accompanying Youth to a Hope-filled Future" returned this year, with a different session held each night this week.

A keynote panel on March 18 featured two young climate activists, Vic Barrett and Dejah Powell, who were later joined by their mentors for a conversation on the intergenerational effort on climate change. On March 19, students from Jesuit universities around the country are set to hold a summit to discuss strategies for campus sustainability initiatives once their campuses fully reopen.

During the March 17 panel, each of the four Indigenous young people took a turn showcasing the songs, paintings and poems inspired by their desire and work to preserve their heritage and the land and water where it has been rooted for centuries.

"Today's a good day because we get to share our story that's historically been marginalized," said Xavier Colon, a member of the Chicago chapter of the Indigenous youth, who sang a song of gratitude in his native language. "Our very existence as Indigenous youth in today's society is our resistance. And our experiences intersect within the scope of climate change and colonialism simply because we are Indigenous and the subject of a colonial state."

Samantha Arechiga, a student at DePaul University and member of the Chicago chapter, played a recording of a powerful poem she wrote that explored themes of environmental desecration, colonialism and the "apocalypse" narrative around climate change — which she said afterward has emerged as more people in power, who have ignored the problem, realize they face the same impacts that frontline communities already have experienced.

"Now that it's inevitable for all humans, it's becoming an emergency," Arechiga said.

Eleanor Ferguson, an 18-year-old Lakota member living on the Pine Ridge Reservation, displayed a painting to call attention to the many missing and murdered Indigenous women, including her cousin, who disappeared six months ago. 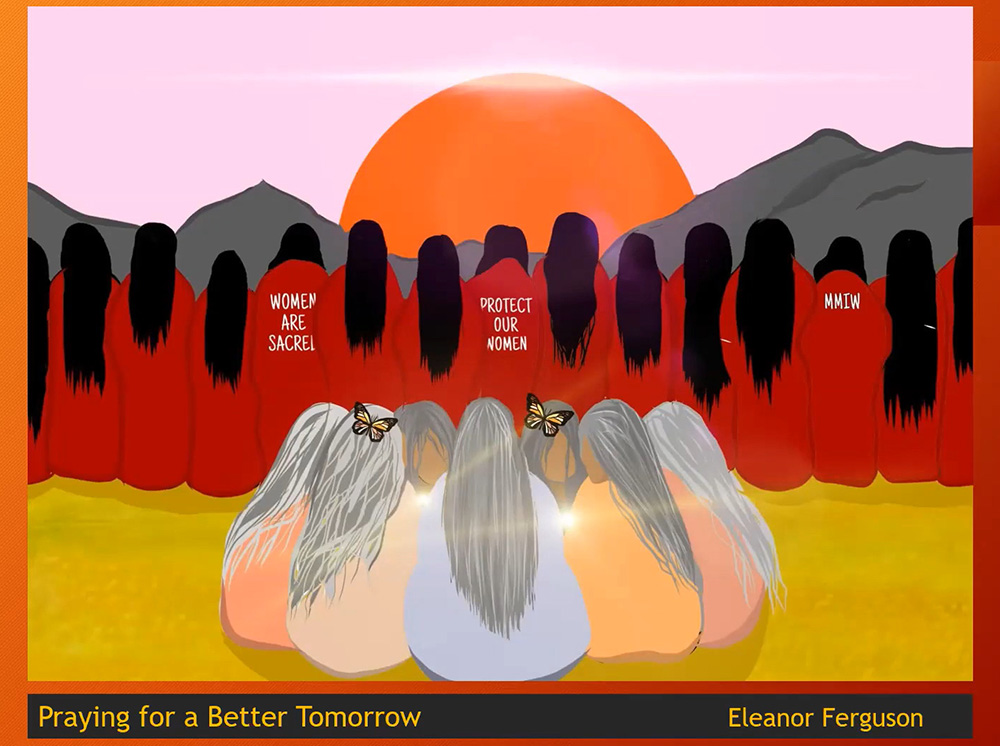 Eleanor Ferguson, 18, created this painting in recognition of Indigenous women who have gone missing or been murdered. Months before painting it, Ferguson's cousin also disappeared. (NCR screenshot)

"The entire time I was painting this, I was praying. I prayed for every single woman and every single family out there who still has a piece missing," she said, adding that the artwork gives her hope that one day the women might return and the killings cease.

Arechiga said it was important to raise the issue of missing and murdered Indigenous women at a climate change conference, because Indigenous women who live or work near camps for fossil fuel projects are at greater risk of violence.

Asked how non-Indigenous people can support Native people, the young people offered three suggestions: educate themselves about treaties and urge lawmakers to honor them; fund Indigenous people's work and efforts; and challenge stereotypes that marginalize and misjudge Indigenous people.

Michael Schuck, a theology professor and co-director of the International Jesuit Ecology Project at Loyola, who co-moderated the discussion, noted that Pope Francis has repeatedly urged people to listen to Indigenous wisdom, and that Passionist Fr. Thomas Berry predicted that the destiny of North America would be determined by the Earth wisdom of its Indigenous communities.

What Berry did not realize, Schuck said, was that wisdom may come from youth. He added that the Standing Rock protest they led "will be remembered as the [Edmund] Pettus Bridge event of the environmental justice movement," a reference to the Alabama bridge that was the site of a landmark civil rights protest 1965. 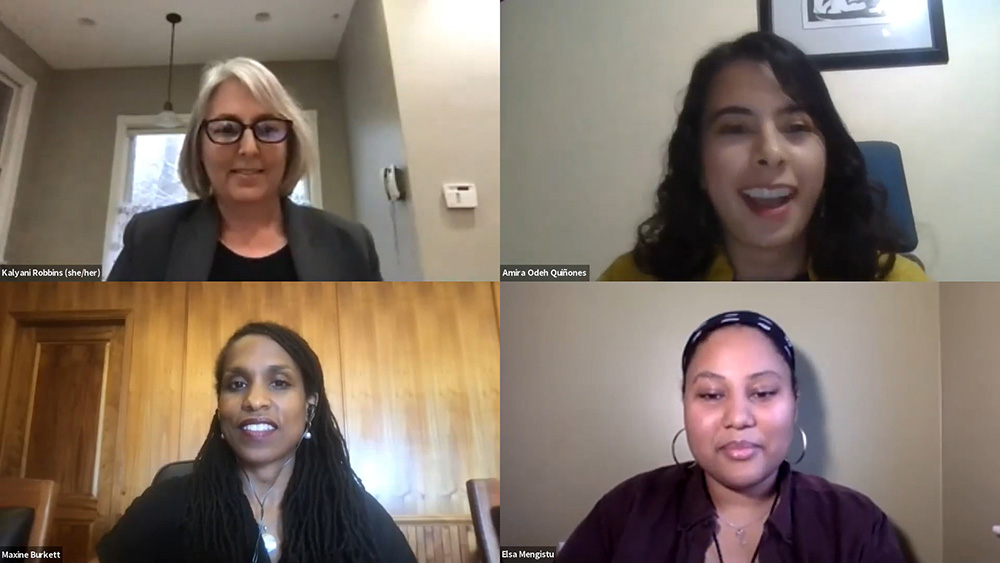 Panelists discuss the implications of climate change on migration and race during a March 16 session of the Loyola University Chicago annual climate change conference. (NCR screenshot)

Earlier in the week, during a conversation on climate change, migration and race, Elsa Mengistu, a sophomore at Howard University, said her involvement in climate justice grew out of an interest in science, but was further nurtured after watching what was happening at Standing Rock, which she saw as colonialism meeting climate change.

Now a member of Generation Green, a young Black environmental organization based in Washington, D.C., Mengistu views her work in addressing the climate crisis as intertwined with creating opportunities for Black women and youth.

"We've created a space to focus on the environment and Blackness, but not in two separate media, but as one fight that is integral to environmental justice," she said.

Mengistu said the environmental justice movement's focus on how climate change affects people where they live can resonate more deeply with more people.

That has been a primary concern of Amira Odeh and her friends in the Caribbean Youth Environment Network, who have been trying to help residents of Puerto Rico feed themselves since Hurricane Maria devastated the island in 2017. 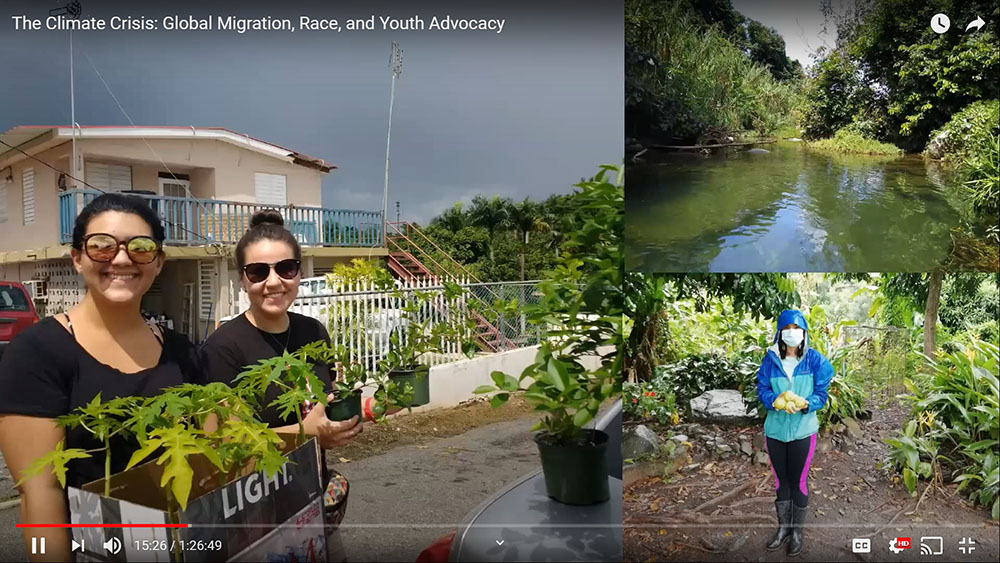 In the aftermath of Hurricane Maria, members of the Caribbean Youth Environmental Network traveled around Puerto Rico delivering seeds and fruit trees to nearly 5,000 families to help people recover and to build up food security before the next weather-related disaster. (NCR screenshot)

The small team has delivered fruit trees and seeds to nearly 5,000 families across Puerto Rico. More recently, they've shifted to helping communities create fruit tree parks, with 16 planted so far. Odeh said that Puerto Rico's colonial status makes it reliant on the U.S. mainland for food, as upward of 85% of what they eat is imported.

The need for greater food security increases as climate change worsens, she said. Along with more intense hurricanes, the 30-year-old Odeh recalls living through an intense drought, warmer summers and the disappearance of the coral reefs where she used to swim as a child.

As the climate continues to warm, she said it's a matter of when, not if, the next destructive storm or weather event will arrive. That is what motivates the Caribbean Youth Environment Network to focus on reforestation and food security to mitigate impacts and make their homes more sustainable and self-reliant.

"We want to be sure that communities are safe and strong to survive the next disaster," Odeh said.

Read this next: Election 2020: How seven climate-conscious young Christians are deciding their vote