When President Donald Trump announced in 2017 his intention to make the United States the first and lone nation in the world to withdraw from the Paris Agreement on climate change, he justified the move by saying he was "elected to represent the citizens of Pittsburgh, not Paris."

But three years later, it was voters in Philadelphia, Pittsburgh and across Pennsylvania that delivered the presidency to his Democratic opponent Joe Biden, who has vowed to immediately re-enter the global climate accord as the first step in enacting his ambitious environmental platform built on the prospect of jobs and justice.

Early reaction from Catholic and environmental activists expressed a guarded optimism that a Biden administration will reorient the country on climate after four years of inaction, but they were well aware of the hurdles he faces — none larger than the potential legislative impasse should Republicans retain control of the U.S. Senate.

"As people of faith, we are grateful that President-elect Biden has a plan to address the climate crisis," said Chloe Noel, project coordinator on faith, economy and ecology for the Maryknoll Office for Global Concerns.

That Biden, who is set to become the nation's second Catholic president, referenced Pope Francis' 2015 encyclical "Laudato Si', on Care for Our Common Home" in his campaign was a hopeful sign, she said, of how he might approach climate policy.

"We pray that the Biden administration will put into practice the ideals laid out in Laudato Si'," she said, "recognizing the need for coordinated action to overcome interrelated environmental, economic and social crises, and prioritizing the long-term health of the planet over short-term economic gain."

Biden has signaled climate change will be a top priority for his administration. His victory speech on Saturday, like the one he gave in accepting the Democratic Party nomination, listed climate among four crises facing the nation that will direct his attention when he takes office.

It begins with re-entering the Paris Agreement.

The U.S. exit became official Nov. 4, a day after the election. Nearly two dozen faith groups admonished the move in a statement, saying it "undermines a key pillar of international cooperation against climate change and damages the world's ability to avoid the most dangerous and costly effects of climate change."

Biden has stated he will recommit the U.S. to the climate deal as part of a series of executive orders he is planning to sign on his first day in office, according to The Washington Post. To rejoin, the U.S. must notify the United Nations with a letter and submit new nationally determined targets to reduce greenhouse gas emissions. The process takes 30 days to go into effect, making Feb. 19 the earliest date of reentry.

Noel said it's important that the U.S. approach reentry "with humility" and work to repair broken relationships. Critical points for engagement, she added, will be prioritizing human rights and multilateralism in climate solutions, ensuring a just recovery from the coronavirus pandemic and recommitting financial contributions to the Green Climate Fund.

The Paris Agreement, adopted in 2015 and which has been joined by 197 countries, has the goal of limiting average global temperature rise to between 1.5 and 2 degrees Celsius. It has drawn widespread support among Catholics, from Francis and the Vatican to national bishops' conferences, scores of religious orders, development agencies and universities.

More than 800 Catholic institutions in the U.S. signed the Catholic Climate Declaration after Trump in June 2017 began the withdrawal process. Dan Misleh, Catholic Climate Covenant executive director, said in a statement Nov. 7, the day Biden was declared a winner in the election, "We look forward to working with you, the new Congress, and the new Administration to better care for God's gift of creation."

"The earth cries out, and science tells us, that we have no time to waste. Our actions are more critical now than ever," he said.

But re-entering the Paris accord may be the easy part.

How much of Biden's $2 trillion climate plan — endorsed by both unions and environmental groups, it calls for creating 10 million jobs in decarbonizing the U.S. power sector by 2035 and shifting the economy to 100% clean energy and net-zero emissions no later than 2050 — can be implemented will likely depend on the make-up of the U.S. Senate. Should Republicans maintain control of the chamber, it could limit climate legislation and leave much of what is done to executive orders.

A potential opening, and perhaps an early test of Biden's ability to work deals with Republicans and the progressive wing of his party, will be the nation's economic recovery from the coronavirus pandemic. Such a green stimulus could be a way for the president-elect to enact his plans around sustainable energy, infrastructure and agriculture, Misleh told EarthBeat.

"Let's hope for progress as opposed to getting everything that one group or the other wants," he said.

Executive orders will be one of the main channels available to Biden to reverse the more than 100 environmental rollbacks enacted under Trump, which have included lifting restrictions on methane from chemical plants and carbon pollution from coal-fired power plants, along with blocking more robust vehicle emissions standards.

Robert Bullard, co-chair of the National Black Environmental Justice Network, told EarthBeat that rolling back the rollbacks is critical, as is enforcing and reinforcing laws already on the books related to justice in pollution, health and housing. He singled out reversing steps to limit the Clean Air Act and weaken the National Environmental Policy Act. 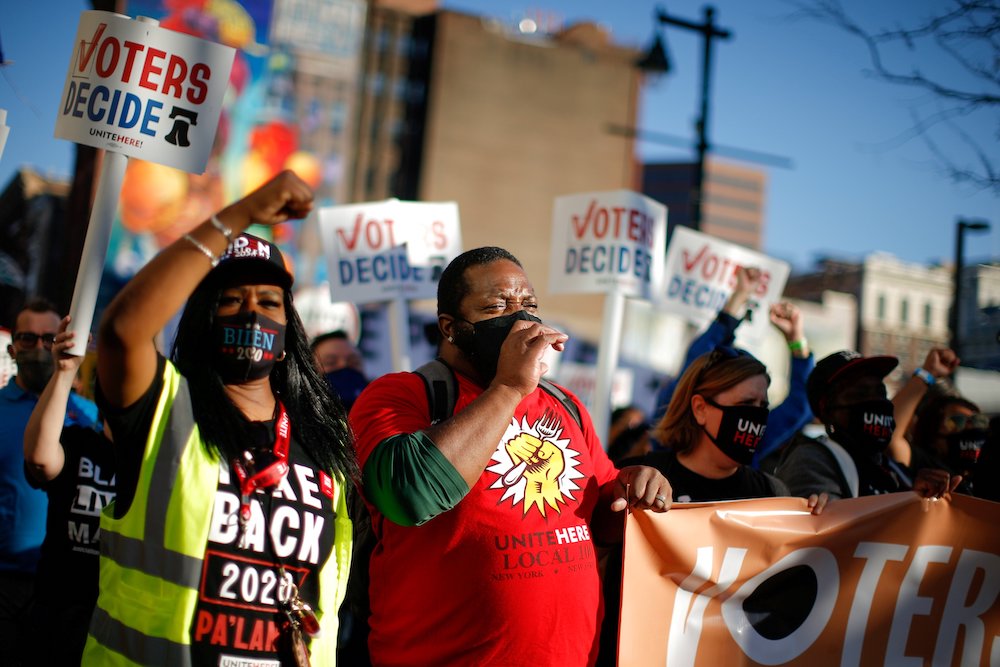 People in Philadelphia march Nov. 7, as they celebrate the announcement that Democrat Joe Biden had won the presidential election. (CNS/Reuters/Eduardo Munoz)

Restoring key environmental policies are all the more important, Bullard said, as communities on the front lines of pollution have been hit hardest by the coronavirus pandemic. Studies have linked increased exposure to high levels of air pollution with higher COVID-19 mortality rates.

"These are life-and-death issues that by a stroke of a pen President Trump actually did a whole lot of damage to communities that have to live with these effects 24/7. And it might sound like something just on paper, but it's real when you look at and you go into those communities and you see across the fence from a school a refinery or chemical plant," he said, adding "We see it as an emergency. And if it's an emergency, then those actions need to be taken first."

Biden has made environmental justice a focal point in his climate plans, pledging that 40% of clean energy spending will go to disadvantaged communities. He has said he will establish an environmental and climate justice division within the Department of Justice, and create new risk screens for pollution, climate vulnerability and racial inequality.

Misleh said the Catholic Climate Covenant, along with its partners like the U.S. Conference of Catholic Bishops, will look to raise up benefits for the poor in any environmental conversations with the Biden administration. The way Biden has spoken openly about Catholic values suggests he doesn't see climate change as simply a scientific problem to be solved, but instead a moral issue, Misleh added. "So I think that bodes well."

One of the first decisions facing Biden will be filling his Cabinet, including the U.S. Environment Protection Agency, Department of Energy and Department of Interior.

According to Politico, potential nominees at the EPA include Mary Nichols, chair of the California Air Resources Board, Washington Gov. Jay Inslee and Heather McTeer Toney, a former EPA official and senior director of Moms Clean Air Force.

At the Energy Department, Biden could return to an Obama-era official, Ernest Moniz, a nuclear physicist who has advocated a carbon tax but has drawn criticism from environmental groups for ties to the fossil fuel industry. Among choices at the Interior Department, which oversees all U.S. public lands and national parks, is New Mexico Rep. Deb Haaland, a member of the Laguna Pueblo tribe who would be the first Native American to serve in a Cabinet position.

Whoever Biden selects will be an about-face from the Trump administration, particularly at EPA, which was led first by Scott Pruitt, the former Oklahoma attorney general who sued the agency more than a dozen times, and now by former coal lobbyist Andrew Wheeler.

What the U.S. is able to achieve domestically will reverberate internationally.

Climate Action Tracker, which monitors government progress in meeting the Paris Agreement goals, projects that the U.S. pledge for net-zero emissions by 2050 could serve as a tipping point to put the 1.5-degree Celsius target within reach. Meeting that goal is imperative, climate activists say, as hotter temperatures pose a disproportionate threat to the world's marginalized communities.

On her podcast Nov. 6, Christiana Figueres, the former executive secretary of the U.N. Framework Convention on Climate Change who oversaw the passage of the Paris accord, said the real significance of the U.S rejoining lies in its ability to exert pressure on other countries, including China and India.

Figueres said another priority is to pressure countries to meet their own emissions targets and raise them, too — a critical step expected at the next U.N. climate summit, COP 26, which was set to begin this week but was postponed a year due to the coronavirus pandemic.

"I think the preparations now and the prospects for COP 26 are fundamentally different than they were just three days ago," Figueres said.

Lorna Gold, acting board chair of the Global Catholic Climate Movement, agreed that Biden's election makes the Paris goals more attainable and will signal to the rest of the world, as well as economic markets "it is 'game on' to reach net zero by 2050." But she too was skeptical of what he'll be able to do on U.S. policy with a potentially divided Congress.

"The climate clock has not stopped ticking over the past four years," Gold said in an email.

In her home country of Ireland, she said there is "genuine excitement" at the prospect of an American president with Irish roots, with a number of counties racing to claim Biden as one of their own.

"There is a real sense of pride here that 'one of ours,' an Irish American is again in the White House," she said.