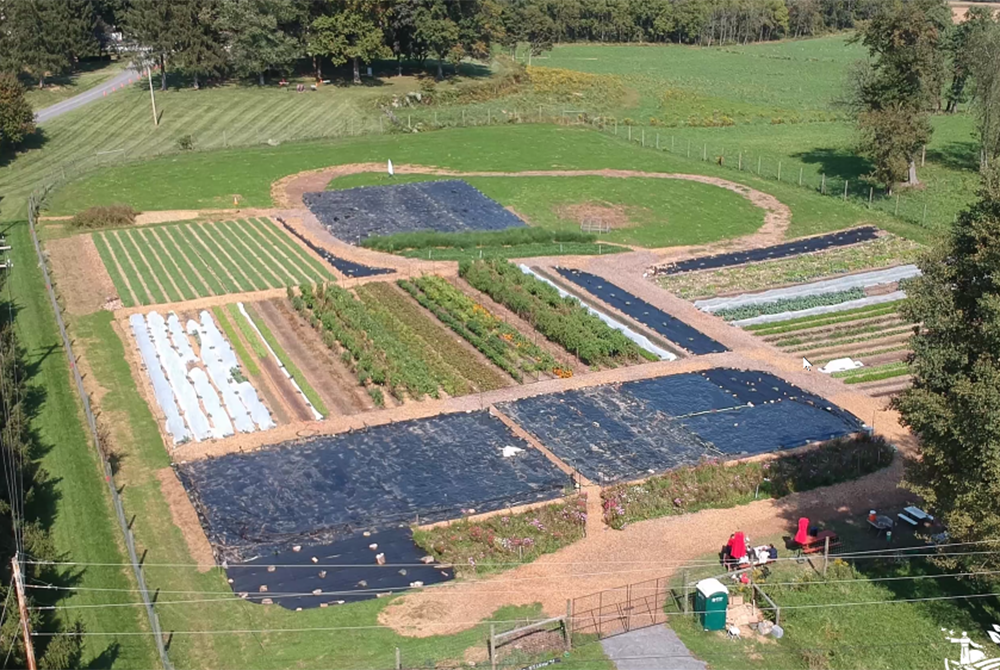 An aerial photograph of Little Portion Farm in Ellicott City, Maryland, which raises organic crops for a soup kitchen in nearby Baltimore. The photograph was part of the presentation by Matthew Jones, farm and outreach coordinator for Little Portion Farm, who spoke during a June 23 webinar sponsored by the Catholic Climate Covenant. (EarthBeat screenshot)

For the Sisters of Providence of Saint Mary-of-the-Woods, in Indiana, a commitment to environmental justice is rooted in St. Mother Theodore Guerin's love for the forest and farmland where she started the teaching community in the 1840s.

Nearly two centuries later, her love for the place has taken root in new ways, first with the establishment of the community's White Violet Center for Eco-Justice in 1996, and more recently with a commitment to climate justice, spurred by Pope Francis' 2015 encyclical, "Laudato Si', on Care for Our Common Home."

"Love for the land is important," Lorrie Heber, director of the eco-justice center, said during a June 23 webinar sponsored by the Catholic Climate Covenant, featuring three of what the group calls "sustainability champions."

By highlighting three farm-related projects where Catholics are living out Laudato Si', the virtual event helped show how groups can take part in the Laudato Si' Action Platform that the Vatican launched in May.

The action platform invites Catholic families, parishes and dioceses, schools and universities, health care facilities, religious communities, farms and businesses, and lay-run organizations to commit to achieving sustainability over the next seven years.

For the Sisters of Providence, the shift came in the 1980s and 1990s, when the community began to focus more on social justice and one sister became concerned about how the community's farmland was being treated by the industrial-scale farmers who rented it for commercial agriculture. The sisters decided to take back management of their land, founding the White Violet Center for Eco-Justice in 1996 to better care for creation.

The sisters ground their efforts in Francis' call for Christians to "realize that their responsibility within creation and their duty towards nature and the creator is an essential part of our faith, that we have a responsibility and a duty to undertake this work, that everything is interconnected," Heber said. "This invites us to develop a spirituality of that global solidarity which flows from the mystery of the Trinity." 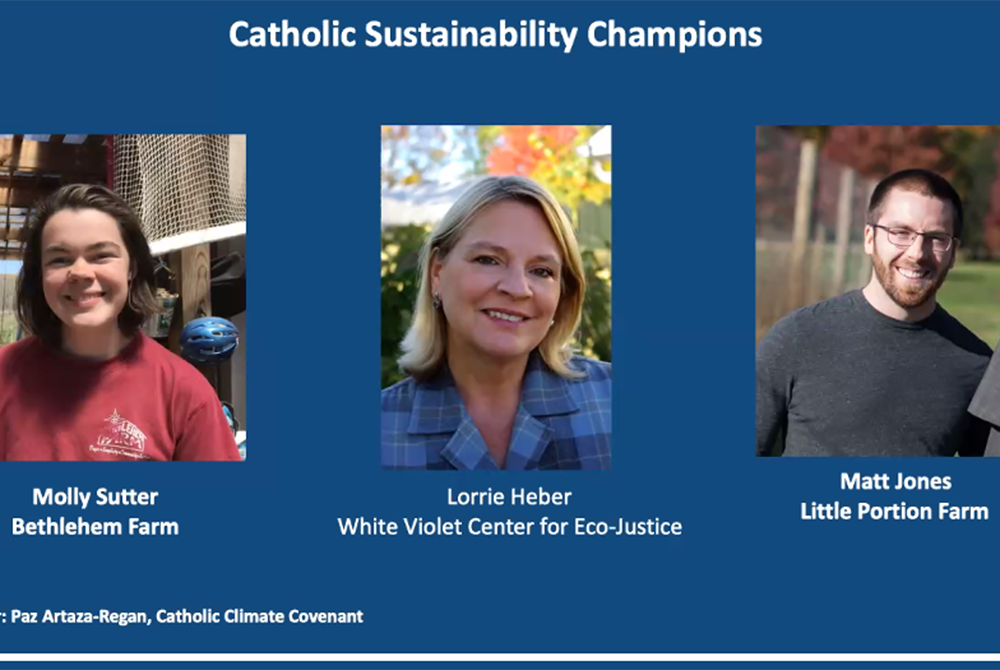 During a webinar June 23 sponsored by Catholic Climate Covenant, representatives from three of CCC's "sustainability champions" spoke on farm-related projects where Catholics are living out Laudato Si'. From left: Molly Sutter of Bethlehem Farm; Lorrie Heber of White Center for Eco-Justice; and Matthew Jones of Little Portion Farm. (EarthBeat screenshot)

They now manage some land for forestry, raise certified organic produce, have areas with plants that attract pollinators, and grow hay to feed their 36 alpacas, which are a high point for visitors.

People visit the center "because they want to meet the alpacas, and while they're here, we get to introduce them to farming," Heber said. "The Sisters of Providence are growing as a congregation, and one of the touch points for that growth ... has certainly been the work that we do through the White Violet Center."

After Francis issued Laudato Si', the sisters decided to focus their justice efforts on climate change, launching a task force, issuing a manifesto and making their own commitment, as a community, to reduce their carbon footprint.

The community's members range in age from 28 to 104, live in very different situations and had different degrees of awareness of sustainability issues, so the sisters developed a method that "met people where they are and allowed them to commit to what they could do in their own environment," Heber said, using the book Low Carbon Diet, a 30 Day Program to Lose 5000 Pounds as a guide.

As the community's general chapter approaches, the Laudato Si' Action Platform is "a really good opportunity for a renewed direction," she added.

Laudato Si', with its call to heed "the cry of the earth and the cry of the poor," also spurred a community of Conventual Franciscan friars in Ellicott City, Maryland, to stop leasing their land for industrial, single-crop farming and launch Little Portion Farm, which raises organic crops for a soup kitchen in nearby Baltimore.

"After Laudato Si' came out, the friars decided that they wanted to manage the land differently ... in a way that we believe is caring for creation," Matthew Jones, Little Portion's farm and outreach coordinator, said during the webinar.

For the Franciscans, hearing the cry of the earth meant restoring the depleted soil with cover crops and doing the farm work by hand, without machinery that would destroy the soil structure and release greenhouse gases.

Following St. Francis' exhortation to keep part of the garden wild, the friars and the volunteers who work on the farm also have planted wildflowers to attract beneficial insects, as well as native shrubs for hedgerows and windbreaks. "So we're balancing out the ecosystem," Jones said. 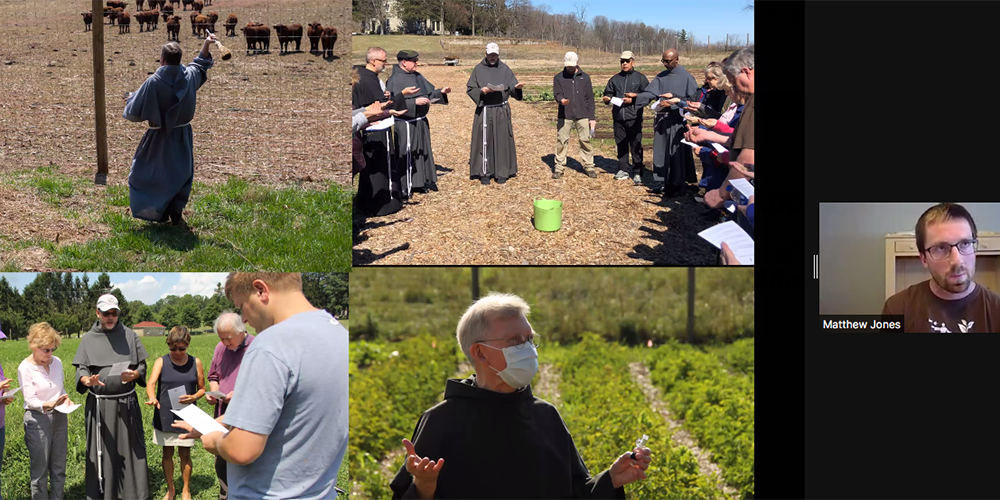 The produce goes to the soup kitchen at the Franciscan Center of Baltimore, which Jones said has served as many as 1,000 meals a day during the pandemic, providing organic produce to people who might have trouble buying fresh fruits and vegetables.

Prayer is also part of farming at Little Portion, with the friars and volunteers joining in rituals to bless the seeds for planting and the first fruits of the harvest. Jones suggested that even Catholics who are not farmers can put Laudato Si' into practice through prayer.

Saying grace before meals "reminds us of our dependence on God for life," he said. " Most of us eat three meals a day, so each of these moments presents an opportunity to experience a direct connection with the earth and with our neighbors, and … ultimately to connect with God."

Slightly to the west, in Clayton, West Virginia, Bethlehem Farm is a Catholic community that invites visitors to develop a deeper connection with the earth and with neighbors by working on the farm, living in community and helping local people with home repairs, said Molly Sutter, one of the farm's caretakers.

Along the way, they disconnect from telephones, watches, iPods and the internet; experience an "electricity fast;" plan and celebrate liturgies together; and learn what Catholic social teaching has to say about ecology and faith.

Bethlehem Farm draws inspiration from Laudato Si', but also from earlier pastoral writings by the bishops of Appalachia and the Catholic Committee of Appalachia. The caretakers live in intentional community, receiving volunteers — about 400 people a year before the pandemic — for week-long stays. They also offer retreats.

Molly Sutter, one of the caretakers for Bethlehem Farm, speaks during a webinar June 23. Bethlehem Farm is a Catholic community in Clayton, West Virginia. (EarthBeat screenshot)

In an area where the nearest grocery store is 40 minutes away, visitors learn the importance of eating "as locally and sustainably as possible" and caring for creation through organic farming, she said. They develop a different relationship with water by using the rainwater the farm collects and limiting themselves to two showers a week.

At the end of the week, "we invite our volunteers to take [the experience] home," Sutter said. "We know that our environmental issues are Catholic issues, not just because of what climate change is going to do in the next 10, 20 or 50 years, but because of how it impacts the poor and vulnerable today."

To put Laudato Si' into action closer to home, she suggested, people can look for local volunteer opportunities, build relationships with local farmers, engage in an electricity fast or work on local environmental issues.

"If you work with young people or parent young people, teach them about sustainability. If you are a young person, teach your parents or your teachers about sustainability. Start the conversation" at home, at work, in your parish or book club, Sutter said. "What we invest our time, our talent and our treasure in is what we will see continue to grow throughout our lives."