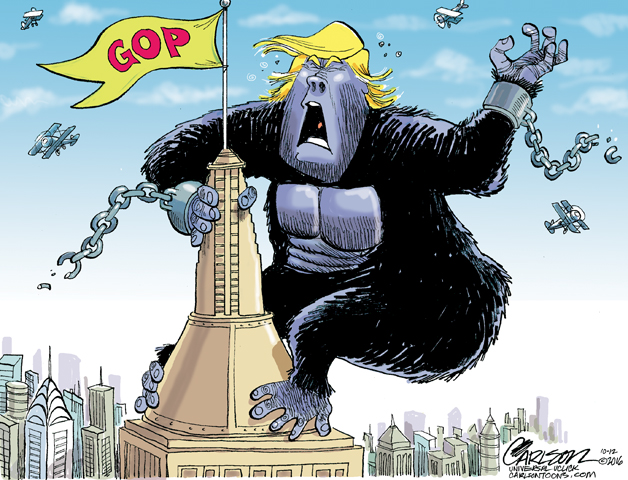 A rationale is being pushed by some bishops and priests, if diocesan papers, email traffic and other social media are any indication, to persuade Catholics to vote for the Republican presidential ticket.

It is never said so bluntly -- there are matters of church-and-state separation and nonprofit status to consider -- but the message is as clear as it has been for the past two or three decades. Abortion outweighs all other issues -- including immigration, poverty and care for the environment -- and when it comes to Roe v. Wade, Republicans talk the right talk. So for Catholics, the choice -- officially, at least -- is predetermined.

Things got a bit more complicated with release of the video footage in which Republican candidate Donald Trump gleefully describes in the crudest of terms how he forces himself on women. However, should bishops concede that the party's current offering does not fit in their moral compass, there is yet a final thread some will attempt to hang from, expressed in the headline: "In choosing presidents, we choose judges, too." That's the banner over a column by Archbishop Joseph Naumann of Kansas City, Kan., in his newspaper, The Leaven.

What he says is true: Presidents appoint judges, most important of which are Supreme Court justices. Given the age of half of the current justices as well as recent congressional intransigence, it is almost certain that the next president will select at least one justice and probably will be called upon to nominate even more.

The concern -- Naumann is not alone in expressing it, he's just one of the more straightforward -- is that a Democrat selecting justices will spell doom for the few issues that seem to hold the tightest grip on those clerics who reduce politics to a narrow cultural litmus test and think the Supreme Court holds the solution.

He and others should be careful what they wish for. The data about the Supreme Court and abortion throws a wicked curve at the prevailing presumption that Republican nominees will see things the church's way. In 1973, the year Roe v. Wade was decided and restrictions on abortion were lifted, five justices appointed by Republicans (three by President Richard Nixon, two by President Dwight Eisenhower) were among the seven who voted in the majority. They didn't even need the two justices appointed by Democrats.

In 1993, in Planned Parenthood v. Casey, five Republican-appointed justices upheld Roe. At the time, only one justice on the court had been appointed by a Democratic president.

Four years earlier, in Webster v. Reproductive Health Services in 1989, the court, on which seven of the justices had been appointed by Republican presidents, upheld abortion restrictions in a Missouri law, but also re-affirmed Roe's central finding of the right to abortion.

It seems safe to say that while states may continue to tighten restrictions on abortion -- and some of those may end up at the Supreme Court -- it is unlikely that the court will overturn Roe anytime soon, regardless of which party is nominating the justices.

The Democrats have shown to what degree they are in thrall to Emily's List and other aggressively pro-abortion groups by amending their platform to include the wish to eliminate the Hyde Amendment, which prohibits the use of federal funds to pay for abortions unless the pregnancy threatens the life of the mother or is the result of incest or rape. The Hyde Amendment will not be reversed, and the move served only to demonstrate that the pro-choice extremes have a tea-party-type grip on the Democratic machinery.

At the same time, the contortions that some bishops and priests are executing in order to justify a vote for the Republican ticket is demonstration of the degree to which certain members of the hierarchy are susceptible to ongoing GOP manipulation, as well as the degree to which they have compromised and narrowed the church's message on social justice.

Characterizing this year's Republican presidential candidate as pro-life would require an extraordinary leap of faith. Placing confidence in the prospect that Trump would, first, choose judges whose views are compatible with the church's and, second, that they would vote as the bishops wish is a crapshoot that places a great deal of the rest of civic life in the United States at risk.

We suspect many sectors of the society will be performing election postmortems to figure out how our politics have reached this point of extreme division.

Related: "Francis tells US Catholics to vote their conscience in November election" (Oct. 2, 2016)

But we especially hope the bishops find a way to do their own introspection on the matter. They must ask how they've become perceived to be so beholden to a single party and so obsessive about a single issue that they've been backed into the corner with a candidate who, save for an opportunistic lunge at the anti-abortion issue, would face a tough crowd in any rational religious setting.

Pope Francis had it right when asked -- U.S. voters should ponder and pray and then vote their consciences. By placing so much emphasis on a single issue, by essentially making it obligatory to vote according to a candidate's or party's stance on that one issue, bishops put many Catholics in a difficult position as they try to reconcile that issue with the myriad others that have raised themselves this election cycle.

In the end, there may be reason a Catholic would find both candidates unacceptable. But please, bishops, restrain your partisan urges on this one. Accommodating those urges isn't worth the long-term damage to the church's credibility.

A version of this story appeared in the Oct 21-Nov 3, 2016 print issue under the headline: Editorial: One-issue obsession imperils credibility.