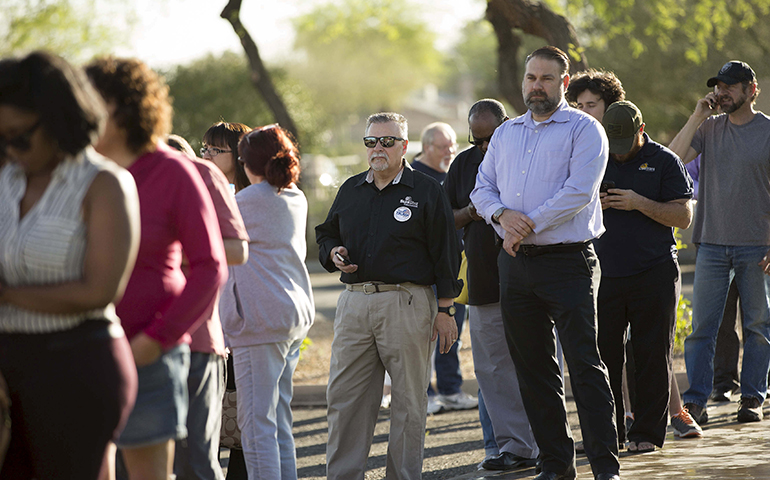 People wait to vote in the U.S. presidential primary election outside a polling site in Glendale, Ariz., March 22. (Newscom/Reuters/Nancy Wiechec)

Editor's note: Updated, July 18, 2016, Part 2 of this interview is now available here on NCRonline.org. Ahead of the Republican National Convention, meeting in Cleveland July 18-21, and the Democratic National Convention, meeting in Philadelphia July 25-28, NCR's Washington columnist Michael Sean Winters and E.J. Dionne, columnist for The Washington Post and fellow at the Brookings Institution, had a conversation about presidential politics and the state of the electorate. Part 1 appears here. The interview has been edited for style and clarity.

NCR: Your book Why the Right Went Wrong: Conservatism -- from Goldwater to the Tea Party and Beyond came out in January, before the big shakeout of the primary process. Given that Donald Trump has now secured the Republican nomination, is there anything in that book that you feel now you want to develop, edit or expand upon?

Dionne: There is nothing that I would change in terms of what was there. The core argument of the book, in the first sentence, "The history of contemporary American conservatism is a story of disappointment and betrayal," is really kind of backed up by the Trump triumph.

So is the fact that I also talk about, right at the beginning of the book and throughout, that conservatives have had a severe problem for a long time because they have relied on the votes of white working-class voters without delivering any material benefits to them.

This isn't just a criticism of some social democratic liberal like me, this is criticism that has come from people like New York Times columnist Ross Douthat; Reihan Salam, executive editor of National Review; and to some degree, former Minnesota Gov. Tim Pawlenty. They said that if the Republicans didn't start delivering something tangible to their working-class constituency, they would face an explosion, and Trump is the explosion. So I'm very comfortable with the thesis. It has been vindicated by events, even though I would be much happier for the republic if I hadn't been vindicated by events.

The book makes a very compelling case that has been borne out by events. It's true that the Republicans have not delivered for the white working class, but to what degree are Democrats also subject to the charge that they haven't really delivered for the white working class? The anti-elite sentiment and the cynicism toward Washington are comprehensive and deep. What is the Democratic responsibility?

There are two things about that: Something that I underscore in my book that Tom Mann and Norm Ornstein underscored in their book, It's Even Worse Than It Looks: How the American Constitutional System Collided with the New Politics of Extremism, is that the polarization we are seeing is asymmetric. What a lot of people don't want to come to terms with when they say, "Ah, it's all populism; look at Bernie Sanders," is this basic fact: In the Republican primaries, Trump prevailed and Ted Cruz ran second. In the Democratic primaries, Hilary Clinton outpolled Bernie Sanders by 4 million votes.

These are two very different parties. The Republican Party is far more radicalized than the Democratic Party. I also think that critics of the Democrats have to take into account that a lot of what they proposed to do for white working-class voters has been killed since 2010. Lower-income white people were among the largest set of beneficiaries of Obamacare. Take a look at Eastern Kentucky as a good example; Kentucky used the Affordable Care Act as effectively as any state and most of the benefits flowed to Appalachia.

There are political reasons why it still didn't catch on, some of them having to do with opposition to Obama. So I think it's very important to say all those things. Inequality has been rising, not just recently, but since the 1970s and certainly since 1980. I would say that the major culprit in terms of policy for worsening inequality are Republican policies, particularly their tax and deregulatory policies that encourage the financialization of the economy.

But I am critical of the Democrats in several respects. One is the financial deregulation of the late 1990s, which was passed by a Republican Congress but signed by Bill Clinton. He has since, I understand, developed some doubts about that, which we all should. I think that is something Democrats need to take responsibility for.

Secondly, I do think that the Democrats have always needed a clearer focus on working-class voters, white as well as African-American and Latino.

Barack Obama would not have prevailed if he had not managed to carry 40-plus percent of the white working class in states like Wisconsin, Ohio, Michigan and Pennsylvania. So Democrats need to do more; they need to focus on this.

I think Brexit reminds us that there are a lot of alienated voters who have been left out of the big party from a combination of the financialization of the economy, deindustrialization, globalization and technological change. That should be a warning to progressives in the United States.

What states are you focusing on, going forward between now and November?

My favorite state to focus on is Utah because I think there is something very extraordinary going on among Mormons and particularly the very, very offensive things that Trump said about Mitt Romney -- "Is he a real Mormon?" -- just as he went after Clinton's faith, just as he went after Ben Carson's Adventism. So I just think that if you look at states that may flip the other way, Utah is one.

Arizona is another because of the Latino vote against Trump and the possibility of high Latino turnout. Trump cannot win this election unless he flips some of the industrial states that have voted Democrat election after election. I'd put Michigan and Pennsylvania at the very top of that list.

Ohio, which is a swing state, is next, and Wisconsin. Although, in recent polls, Clinton seems to be doing better in Wisconsin than in some of those other states. But Trump's only chance of winning (and I think it's a long-shot chance) is to flip some of those industrial states.

The other states that I think are obviously of interest as always are Virginia, which I think is becoming a more Democratic state. Clinton is trying to put North Carolina in play and the polls there have been virtually even. Then Florida is obviously enormous, and -- this is something you, Michael, have written about a lot -- the Latino vote will be central to the outcome in Florida. We're going to see a lot of time spent in Florida.

One last thing about how unpredictable this election could be: There is at least one poll that showed Kansas competitive. Now if we see more polls like that with states like Kansas and Utah, then we are looking at a completely different kind of election, far more like 1964 than 2008 or 2012, but it's premature, obviously, to say that.

In Part 2 of this conversation, which will appear July 18 on NCRonline.org, Winters and Dionne talk about Hillary Clinton, the Libertarians and the U.S. bishops.